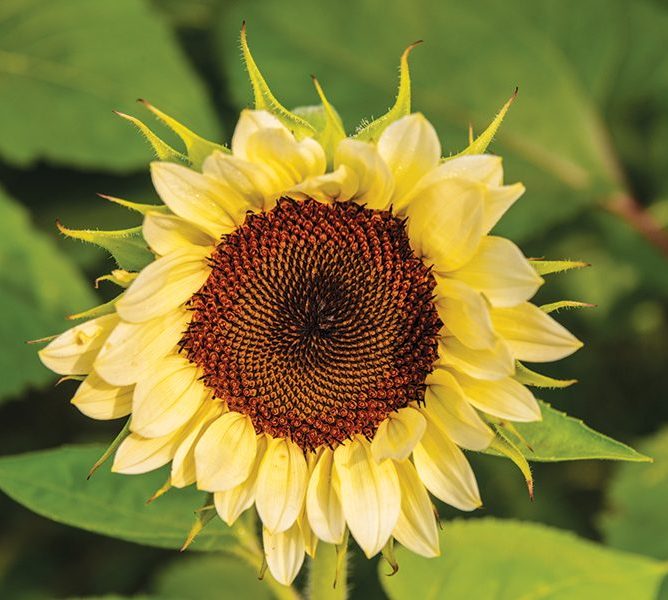 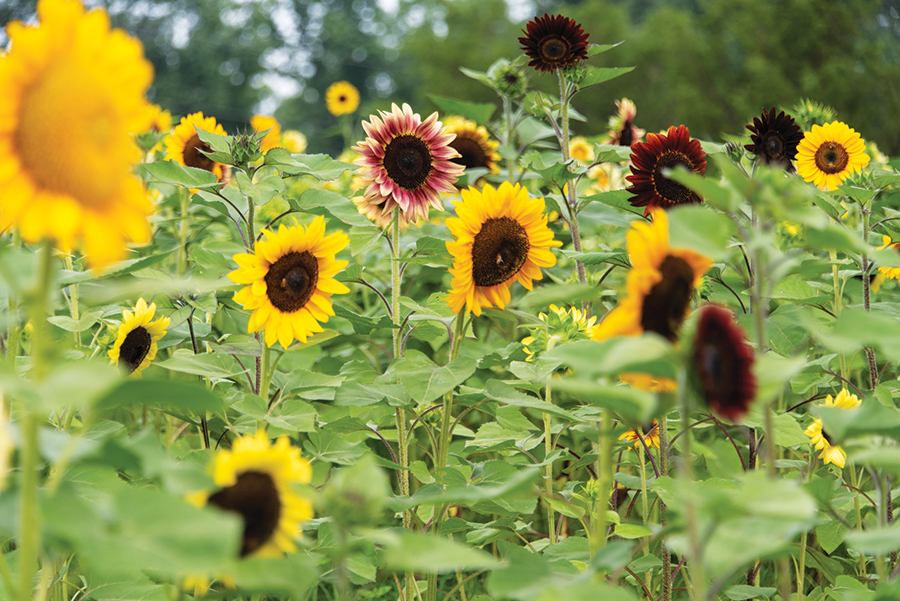 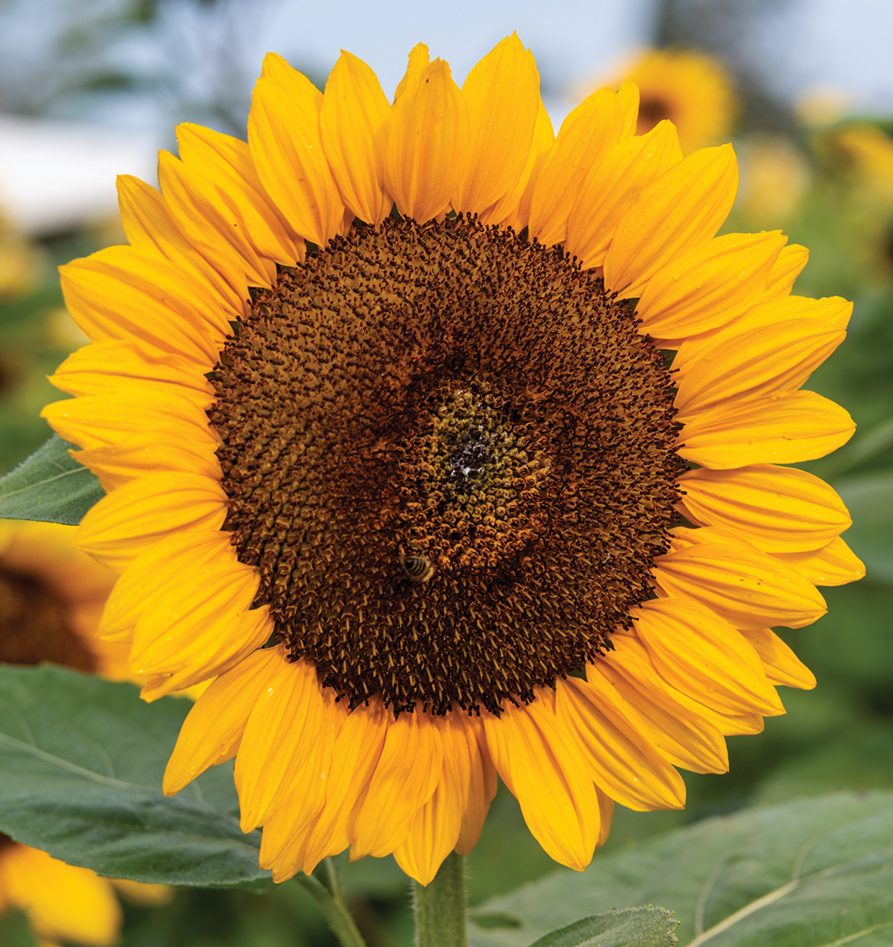 Wendi and Art Johnson are the owners of Dewberry Farm, a private farmhouse in Kernersville that hosts weddings, receptions and rehearsal dinners, along with three public events — a spring, you-pick, tulip festival, a summer, you-pick, sunflower festival and a Mother’s Day traditional British tea and flower buffet.

Wendi is originally from Alta Loma, California, in the foothills of the San Gabriel Mountains, and moved to this area 31 years ago. Art, an electrician by trade, worked with Starr Electric in Greensboro before starting his own electrical business — which he still runs.

The two became acquainted when Wendi and her husband joined Pine Grove United Methodist Church in Kernersville, where Art was also a congregant. Sadly, Wendi’s husband passed away, leaving her a widow and leaving Art…interested. So he phoned her.

But Wendi — still shaken by the loss of her husband — wasn’t ready for companionship.

“Art was very kind and very patient,” Wendi says. “But he was persistent!”

“I think they felt sorry for me,” she says.

Art says he quickly took his father aside.

Then one day, Wendi decided if Art phoned again, she’d talk with him.

Art being Art, he called, suggesting that Wendi come out to the farm to have a look at his horses.

As they drove into the property, she saw Art’s house for the first time.

“Funny thing is, I always wanted to live in a big yellow farmhouse,” Wendi says. “And here it stands!”

She explains that the relationship “just went from there, from friends, to being there for each other.” In time, romance blossomed.

“By January 2007, Wendi and I pretty much knew we were getting married,” Art says. He gestures toward a window.

“The lawn there at that time was a riding ring that my daughter used to work her horses for showing,” he says. Since his daughter had lost her interest in horses, he decided to take the riding ring down and sow grass. 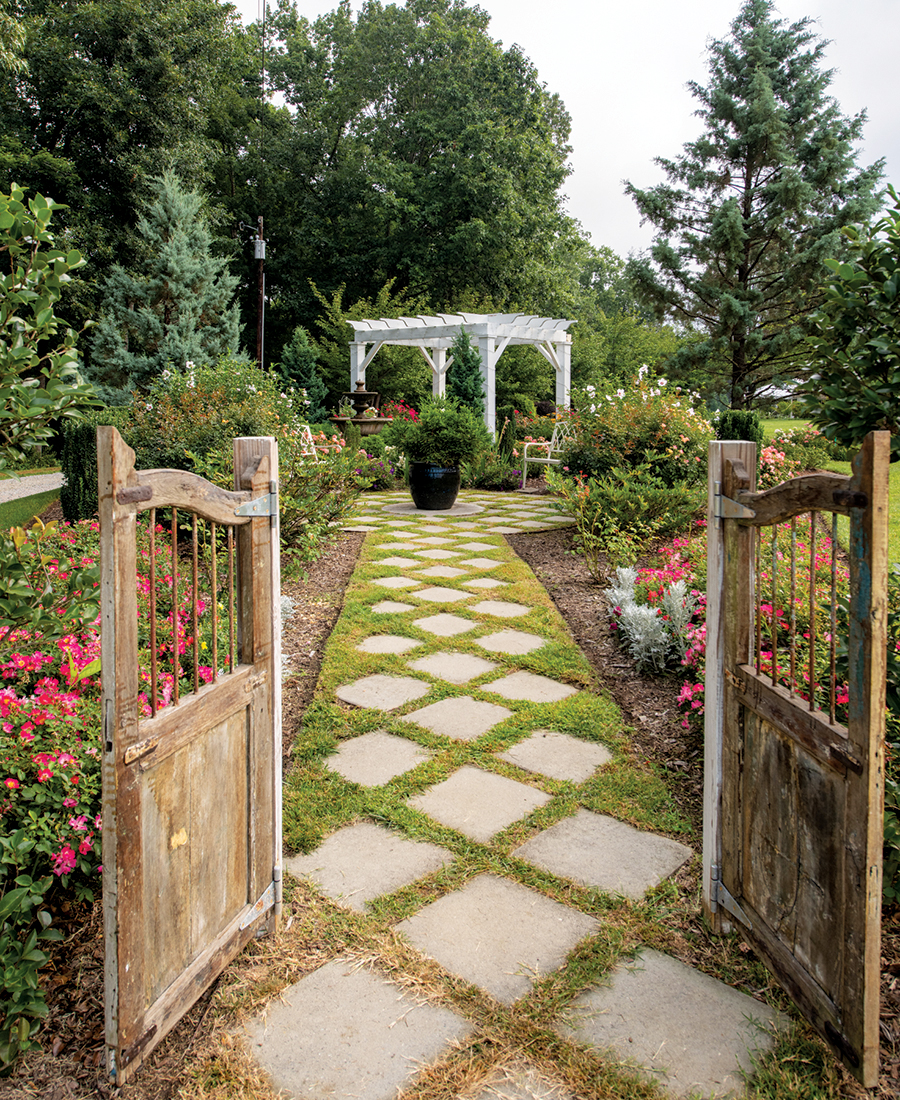 That spring, he built a pergola and installed a fountain.

“No landscaping — just grass, the pergola and the fountain,” Art laughs.

Wendi and Art were married at that spot — the first couple to exchange vows on the property.

Soon after, when close friends asked if they could have a wedding there, the Johnsons talked it over and agreed.

“After the ceremony, we thought, ‘You know, this is not too bad,’” Art says. “The property works well for it, so we decided to see if we could do weddings here.”

Dewberry Farm is a 20-acre parcel in a larger tract of some 100 acres purchased by Art’s grandfather, Ash Johnson, in 1925. Most of the information Art has about the land comes from his 98-year-old father, Don, who lives just up the farm lane.

“You probably saw him out on his mower when you drove in,” Art chuckles.

Tobacco was the main crop of the original farm. Art remembers two dilapidated tobacco barns still standing when he was a boy.

“They were pole barns on the point of collapsing,” Art says. “By the time I was 18, we wound up taking them down completely.”

Ash Johnson also grew sorghum and had a mule-driven press used to crush sap from the stalks that was cooked down to make molasses. Neighbors would also bring their sorghum to be pressed.

“We’ve run across people who remember coming here on pressing day,” Art says. “It’d be a big gathering, with people bringing covered dishes and hanging out for the evening.”

After his grandfather died in 1957, Art’s grandmother remarried and moved to Colfax. The farm sat vacant, and the original house burned down in 1961. Today’s yellow farmhouse was built near the old home place site in 1989.

Art and Wendi began to make improvements to the property, speaking with neighbors and county officials about their hopes and plans.

“There were issues, of course,” says Art. He explains that a piece of state legislation enacted in 2010 supporting North Carolina agritourism helped facilitate the process.

When it came time to name the road accessing the property, Art and Wendi thought of the nickname Art’s father had been given when he worked at Piedmont Airlines.

“He still won’t tell us how he got the nickname ‘Dewberry,’” Wendi laughs.

They tell me about the farm’s four-footed attractions.

Mention of the animals reminds Art to tell me about the horse barn.

“Back in 2008, with the recession, business was waning,” Art says. Since he’d always wanted to build a horse barn on the property and had more time on his hands, he decided to get one of the men who worked for him to help harvest trees on the farm.

“So we dropped the trees, got them all stacked in piles, then figured out what we needed as far as lumber size,” Art says. When the site was ready in the summer of 2010, a friend of his who owns a portable sawmill brought it over.

For a month on weekends they milled lumber, stickering and stacking it to cure. In the spring of 2011, they began construction. 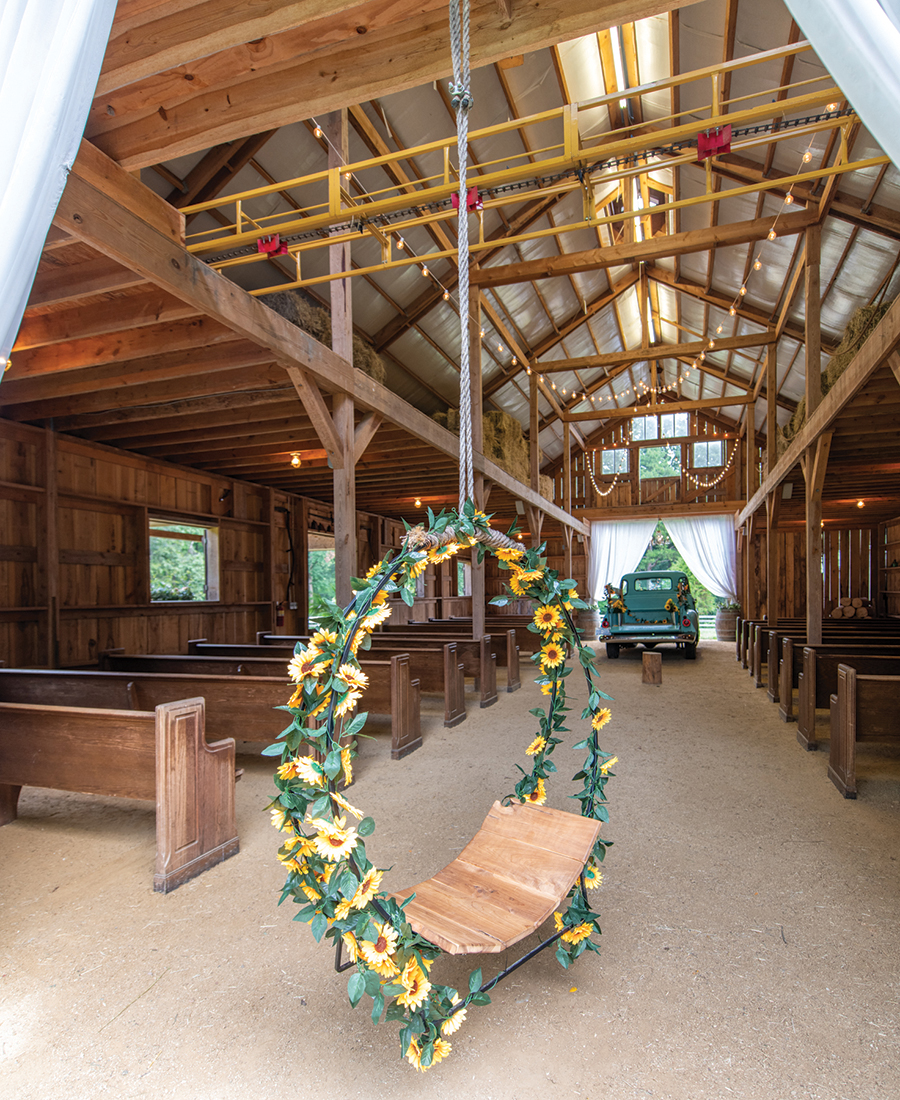 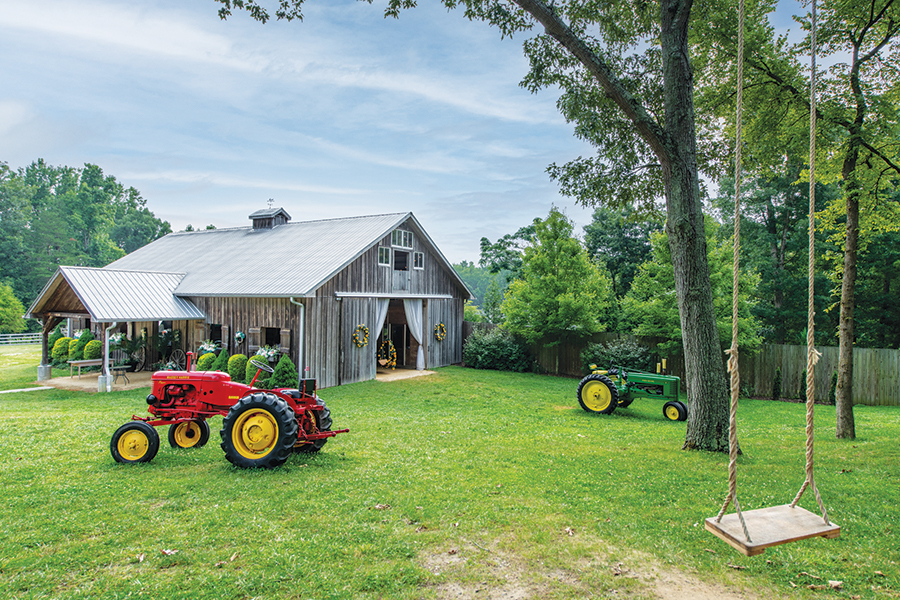 The plan was to make four stalls, with windows in front. “I love seeing horses poke their head out a stall,” Wendi says.

The project was nearly finished in June, right around the time they had their first bride scheduled.

“Oh, she was so sweet,” says Wendi. And it was raining cats and dogs on her big day.

So the Johnsons called family, who spent hours helping them get the new barn cleaned up and presentable for a wedding.

“Art begged me not to post a picture of her getting married in that barn,” Wendi adds. “But of course, I did.” The next day Dewberry Farm’s phone was ringing off the hook with brides asking if they could use the barn.

“So there went my horse barn,” Art says.

“We never stalled it and there are church pews now,” Wendi says. “The only animals ever in it were our first litter of piglets.” She laughs. “But we do use it for hay!”

The signature of Dewberry Farms?

“I love flowers,” Wendi says. Some time ago she was doing research and saw an article about Burnside Farms in Virginia, a huge tulip grower. Wendi was intrigued. Networking with other North Carolina agritourism farms, she’d seen that many had you-pick events, mainly for fruit.

“I asked Art, ‘What do you think about this? Could we do this?’”

The couple reached out to Burnside Farms and traveled up to talk with them. Burnside also produces sunflowers — a summer crop that’s much easier to plant.

“We feel if we’re going to ask people to pay to come in and pick flowers, we have to give them access to see the flowers,” Wendi says. So the Johnsons plant their sunflowers in beds, five rows to each bed, all sown with a hand-operated seeder.“It’s more labor intensive,” Wendi adds, “but that’s how we think it looks pretty.”

Between the beds are grass walkways for customers. Wendi plants only bouquet sunflowers — 19 different varieties.

After the first you-pick event with sunflowers, Art and Wendi decided to give tulips a try the following spring. It was a project that would put the perseverance Art had demonstrated in his courtship of Wendi to another test.

Through a local hardware store, they discovered Rooteveel Bulb Company in Holland as a direct supplier.

“They’re fantastic!” Art says. “The first year they came out to our property and checked our soil and inspected the bulbs.” Now, they come every year right before the tulips are ready bloom.

Two workers would put the board on the ground with the pegs down and jump on it, driving the pegs into the soil. When the board was pulled up, other workers would place the bulbs in the holes by hand. Then repeat.

It was hard, slow work.

“The guys who did the planting were in my electrical business,” Art says. “Fortunately, they’re healthy, strapping guys who don’t mind being punished. It worked out well, but it was tough.” 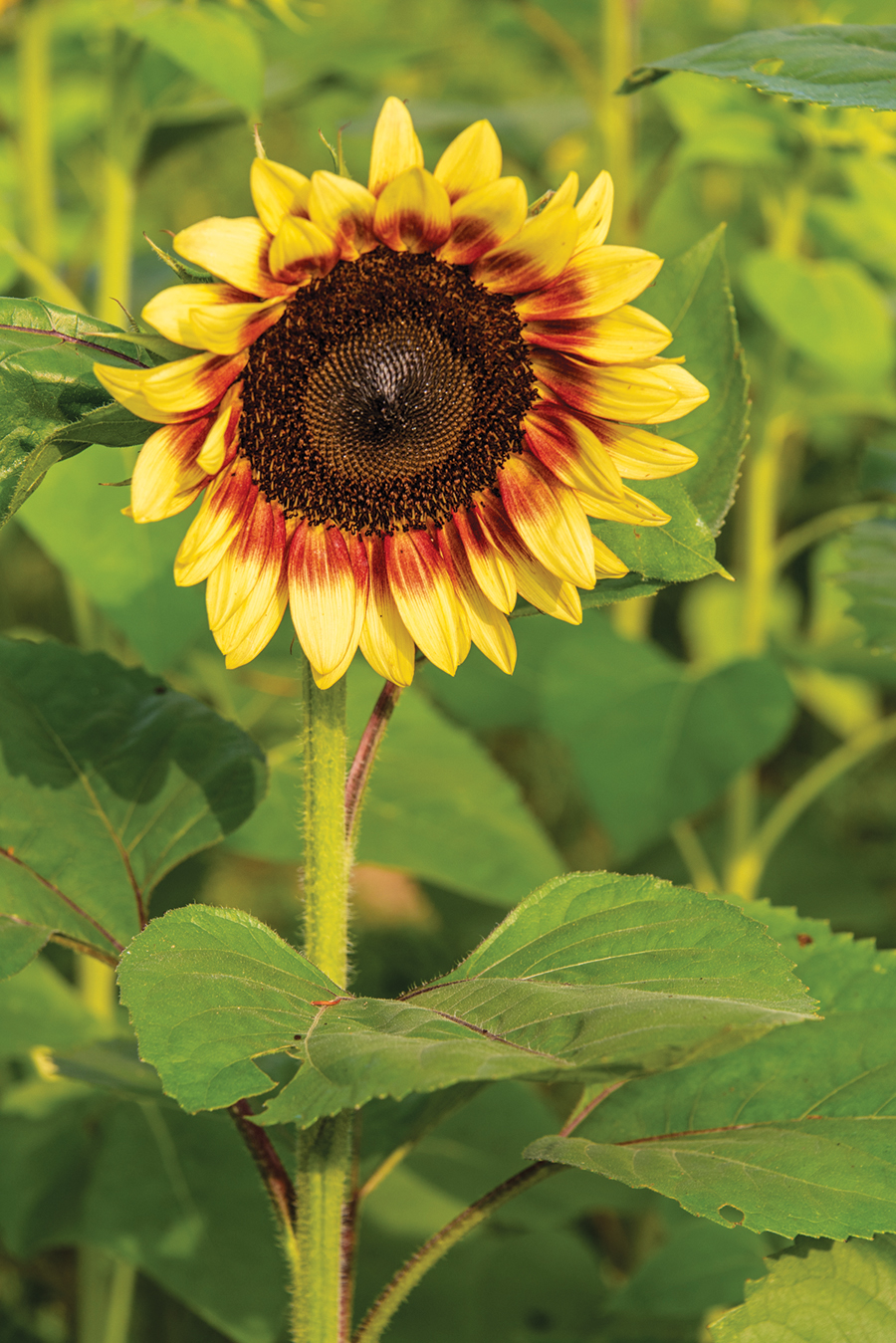 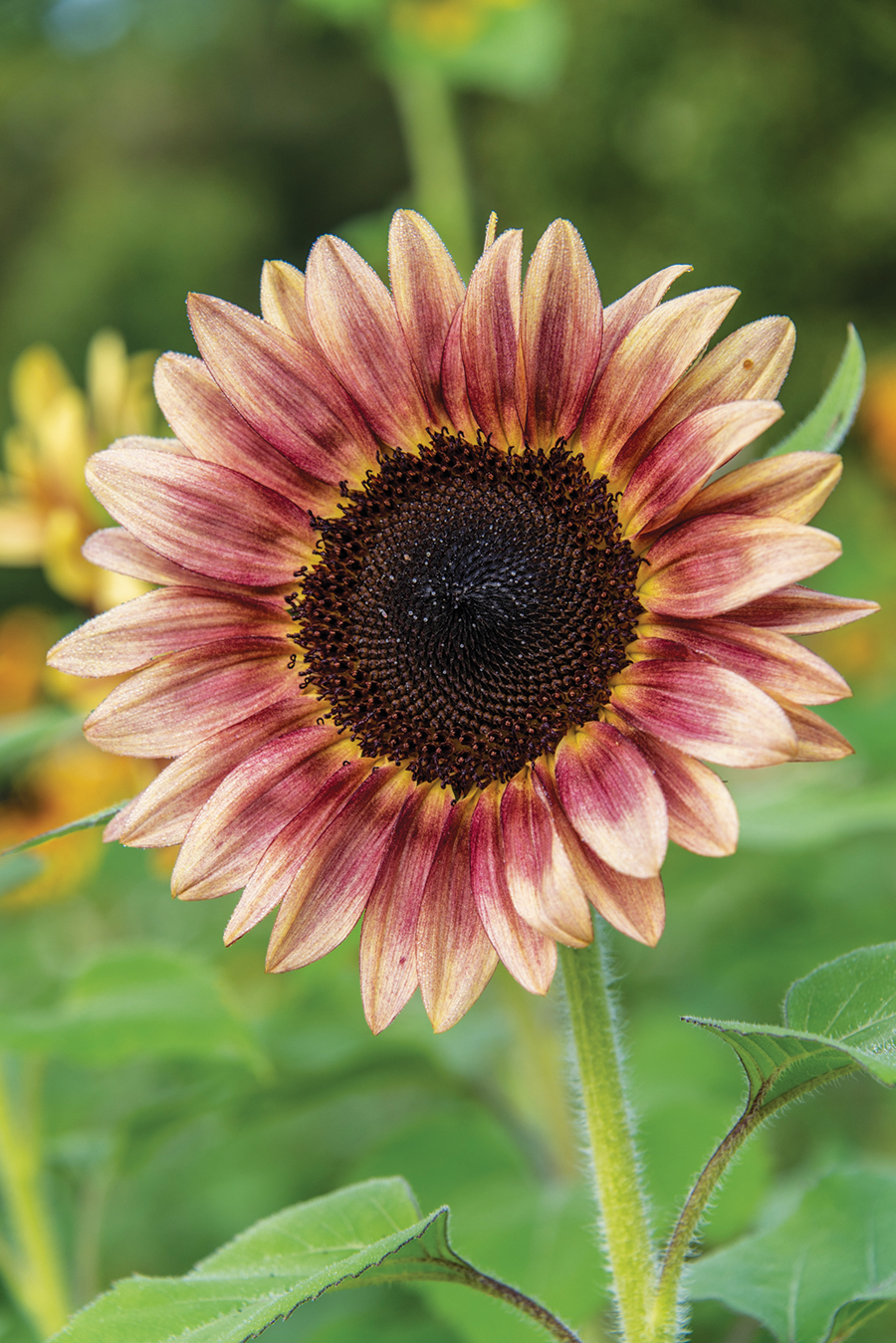 It took the Johnsons two weeks to get the first crop of tulips in the ground.

The second year they planted 50,000 bulbs, using the same process.

When they decided they wanted to try 100,000 bulbs, they knew they’d have to find another method. Art put on his research cap.

“We figured the only way we could plant anything over 50,000 was to have some type of machine,” Art says.

Unfortunately, the bulb planting machines made in Holland are massive — designed for big, level fields, not small farms in the North Carolina Piedmont. The tractors needed to pull these machines are equally massive — and tremendously expensive to buy and transport.

Then Art came across a garlic-planting machine online that was manufactured in Poland. He found a representative for the company who was located just outside Ottawa, Canada.

“So we show up there and the rep has this plot of land where he uses this machine himself for planting garlic,” Art says. The machine was about four feet wide and six feet long with a hopper to hold bulbs. It was drawn by a tractor with a three-point hitch.

“The planter has two seats, you know, like the old tobacco setters,” Art says. He gave the rig a test run and decided — with modifications — the machine would work for planting tulip bulbs at Dewberry Farm.

“I thought, ‘This is going to be great,’” he says. “I never even thought about spending time trying the planter out before it was time to use it.”

“We just ran into all kinds of issues,” Wendi says. “And it was a super wet year. It just wouldn’t quit raining.”

With mechanical challenges and the wet season, it was December before all 100,000 bulbs were in the ground.

While some additional changes to the planter were made at a friend’s machine shop that spring, most of the issues were resolved by finding a tractor with a lower gear ratio so it could pull at a slower ground speed.

“The next year it worked much better,” Art says. “And we found what we needed to do with the soil. It needs to be thoroughly tilled, but then recompacted, so it’s not so fluffy.”

“My favorite thing is the tulips,” Art says. “It’s like . . . spring is here. And you see how many people have come and are enjoying what they’re doing. And this was our best tulip crop ever.”

“It was stunning,” he concludes.

Wendi agrees this spring’s tulips were the prettiest.

“For me, the Mother’s Day tea . . . that’s fun!” she says. She tells me the caterer is the same person who catered her own wedding on the farm.

“I used to work with her years ago,” Wendi says. “Her husband is British, so her father-in-law makes the clotted cream for the meal. It’s all china and pretty linens.”

After tea, Art takes the mothers on a garden tour.

“In the barn, there’s a buffet of fresh cut flowers that we grew in the garden,” Wendi says. “Roses and peonies and more.”

When the garden tour is finished, the mothers go through a line in the barn, making themselves bouquets of Dewberry Farms’ lovingly grown flowers to take home.

For more information about weddings and events at Dewberry Farm, go to www.dewberrymanor.com. OH

Ross Howell Jr. is an O. Henry contributor. Contact him at ross.howell1@gmail.com.