Deep in a quiet wood, a notebook offers glimpses of a kindly human spirit

The sight of a black plastic mailbox usually doesn’t make me smile.

But this one — lashed with a blue bungee cord to a splintered stump in the middle of the forest — brought a grin.

The red flag was up.

I had mail! And so did everyone else on this wooded trail, a hilly vein hugging one of Greensboro’s drinking-water reservoirs.

I opened the hatch to find a composition book titled Mailbox in the Woods.

“Share a thought, blessing, poem, or just say Hi!,” the creator had penned on the cover in blue ballpoint. She (my guess) signed it with a smiling cat face and noted that the book was Volume 2.

The entries, which started in November, filled more than half the book, suggesting that she had started her project during the pandemic.

The past year had twisted the norms of, well, everything, and like scads of others, my husband and I had doubled down on our woods walks, partly for exercise, partly for solace.

The woods reminded us that destruction and creation live side by side, in balance, though it might not seem like that at any given moment. So during a time of national darkness, with nearly 600,000 Americans perishing from COVID-19, Greensboro’s sublime system of watershed trails was a lifesaver. 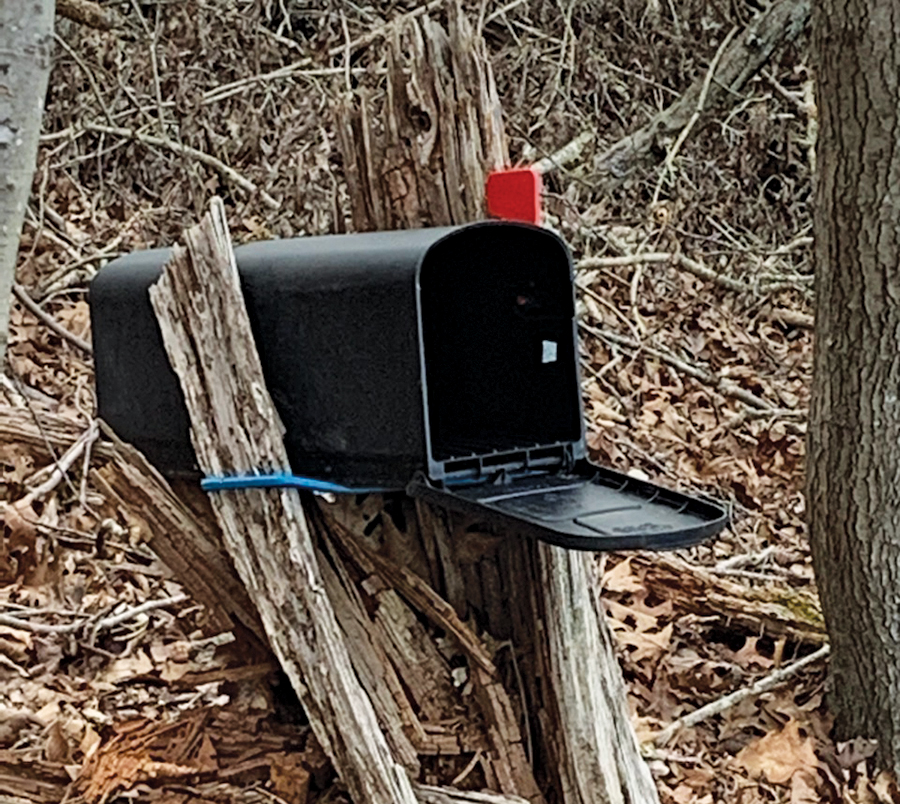 Someone else had felt it, too, and she’d cast a net to catch the sentiment and let everyone know that, even though they might be walking solo, they weren’t alone in their thirst for beauty and hope and a smile.

It reminded me of similar expressions I’ve seen in other remote locations: the mailbox that harks to walkers at the north end of Wrightsville Beach; the spontaneous shell art stuck on driftwood at the Botany Bay preserve on Edisto Island, S.C.; cairns that rise from the forest floors of state parks; Christmas ornaments that hang on trees behind Safety Town in Greensboro.

For some, these creations say that human beings can’t leave nature well enough alone. But to me, these traces are like candles in a chapel, a gentle sign of community. The Mailbox in the Woods — and the messages inside — whispered that there was a tribe of heart-bound souls treading the root-laced paths.

Nine days into November, a hiker named Jeanne opened the book and wrote an Emily Dickinson poem that she learned in sixth grade, in 1970:

“The morns are meeker than they were

The nuts are getting brown

The berries’ cheeks are plumper

A few pages later, the scouts of Troop 118 scrawled their names.

Eddy from Germany complimented the nature that surrounds Greensboro.

Amy from Connecticut praised the book itself: “Coolest idea.”

An anonymous young writer struggled with life in plain view: “I had my first sip of Jim Beam today; I’m reaching into my slightly inebriated mind to give you a sober thought: surround yourself w/ people that will be good for the long run :)”

On November 22, C and B drew hearts and shared big news: “We just got engaged, about 30 yards away from you, mailbox!”

Visitors from New Hampshire and Vermont left their marks.

A child shared a brush with adventure: “We almost fell in the water.”

In places, the messages sparked a playful dialogue.

“Thanks dude,” another responded.

“How about my sweater?” added yet another.

On another page, love blossomed: “I just met a really great girl. I think this could turn into a relationship.”

“Congrats brother,” someone wrote below that.

“I’m going to be a grandma!” someone gushed a few pages later.

“Yay! Congratulations,” someone else responded.

As I leafed through the book, what struck me was the lack of venom. Even though this was deep in the woods, there were no trolls. None of the messages was hateful — unless you counted the swipe at 2020: “Here’s to hoping 2021 doesn’t suck as much.”

Sure, people revealed pain — “Fighting that post-Christmas depression,” and “I’m still in love with my ex”— but there was no piling on. There was only encouragement.

“You’re gonna get through this.”

“No better time than this, and life is good, the only one,” one correspondent reflected in Greek with a sidebar of English translation.

Was the upbeat tone a reflection of the people who are drawn to walking trails?

Was it because no one was looking over their shoulders, counting the seconds until a response landed?

Was it because of the reflective setting?

Whatever the cause, I was grateful for this slow-walking social media. Another writer said it better than I could.

“Hello MailBox in the Woods! It’s been a tough year, but moments of whimsy like these make it bearable. Thank you & blessings to all.”  OH