Today, Thomasville’s Renaissance Revival mansion of the T. Austin Finch house is a favorite photo location for blushing brides, who smile radiantly for the camera from the Juliet balcony.

Exactly one century ago, the elegant home was built for another blushing bride, Ernestine Lambeth, the newly-wed wife of T. Austin Finch. Although the house was built as a symbol of their union, it also represented the fusion of two families’ successful companies: Lambeth Furniture and Thomasville Chair Company. 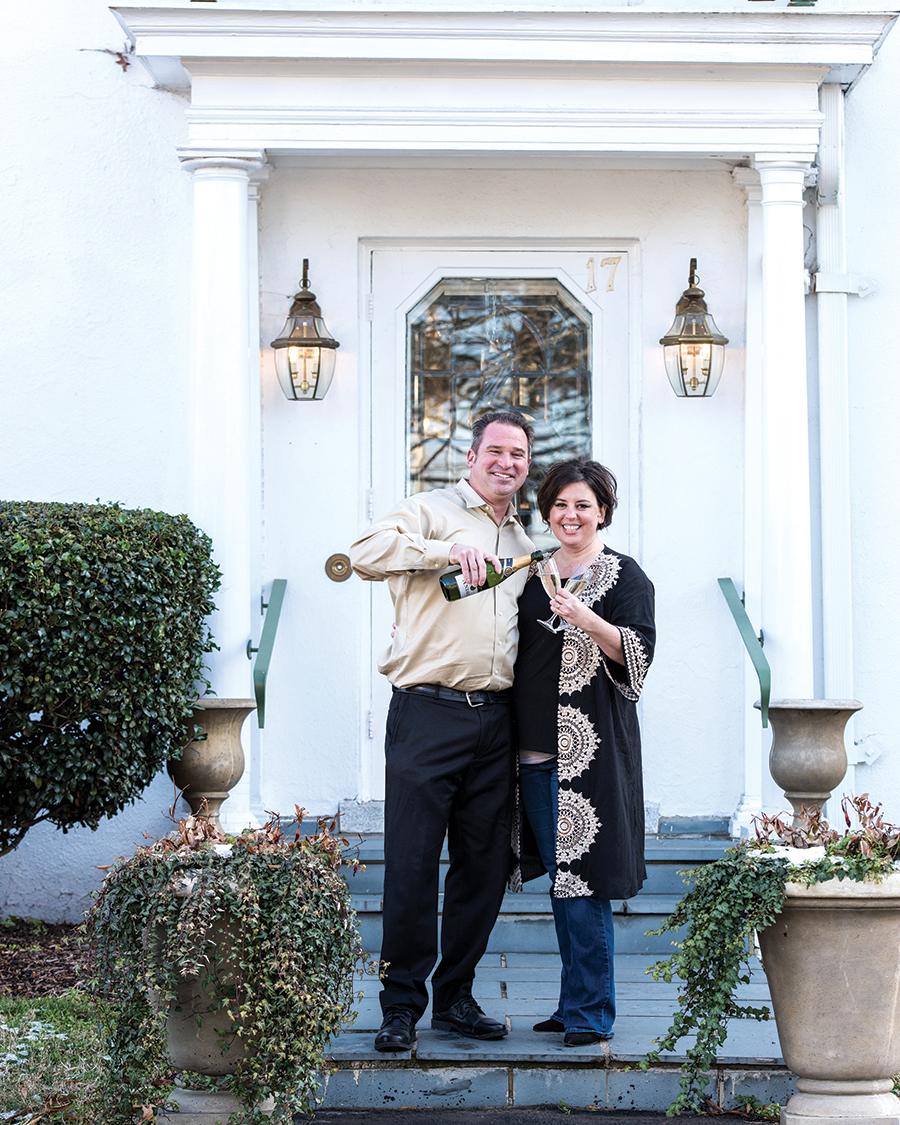 But that was in another era. In succeeding years, the North Carolina furniture industry became a shadow of its former self. T. Austin Finch House languished, and then sat empty, serving as a poignant reminder of the decline of manufacturing in the state and in the Triad.

That’s when another young couple, Hilary and Andrew Clement, entered the story. They knew it wouldn’t be easy, but with an infusion of love and cash — not to mention strong backs and helping hands — the Clements vowed to restore the T. Austin Finch House to its former glory.

How that transpired is quite a saga.

The Clements were living in Greensboro when, in 2016, Andrew took a teaching job in Thomasville, which was close enough to commute. It wasn’t long before he learned about the historic Finch house, which had been on the market for several years.

No one wanted the house to be lost, including Thomasville’s city leaders, recalls Andrew. It was a valuable piece of the town’s story, and over time, it became a siren call to a man itching to see the old beauty saved. 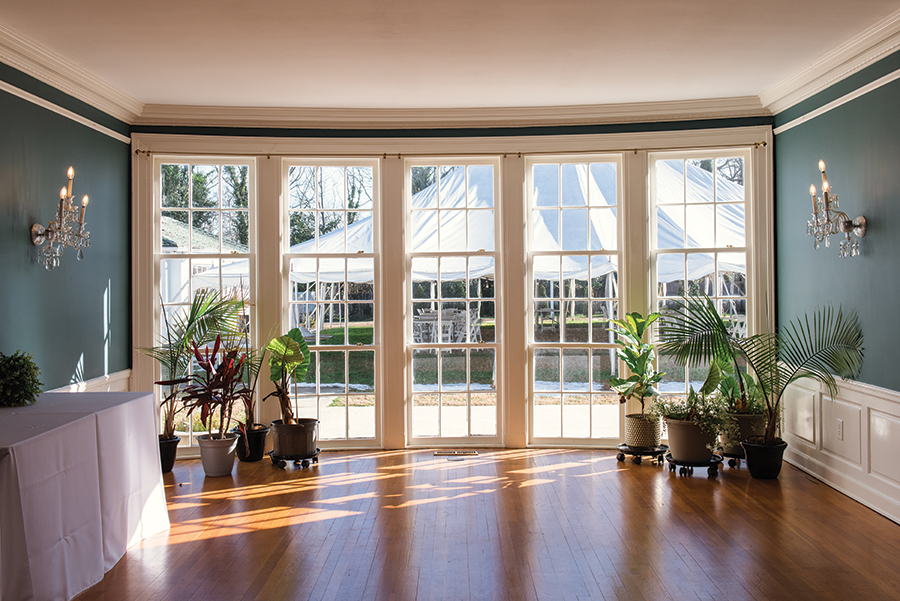 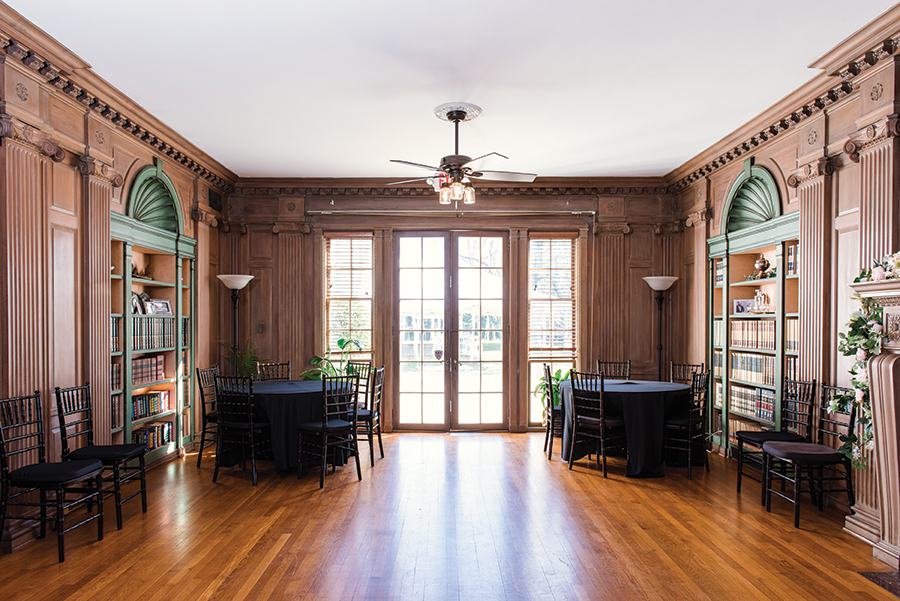 The story of the house’s revival began in the summer of 2017, when Andrew began making repeated visits to the 1.5-acre property. He peered through the windows, admiring the architectural details and sensing the mansion’s former grandeur. Then he began wondering what a little love — or, more like a lot of love — could do for this vacant old house. Basically, Andrew Clement had fallen irrevocably in love with the Finch House. To get some perspective on his infatuation, Andrew decided to call Jim Howard, a Realtor and longtime friend, to walk through the mansion with him.

“It was an incredible deal,” says Howard. But what would Hilary think? Howard recognized it just might be a perfect match for the Clements, who were no newbies to restoration projects. In fact, buying and flipping houses was more than a mutual passion and avocation. “In 20 years as a remodeling contractor, I have repaired and renovated over 500 homes,” says Andrew. And together, Andrew and Hilary had renovated 17 properties — all distressed and most in foreclosure — including a 1938 bungalow in Glenwood, which they documented online. 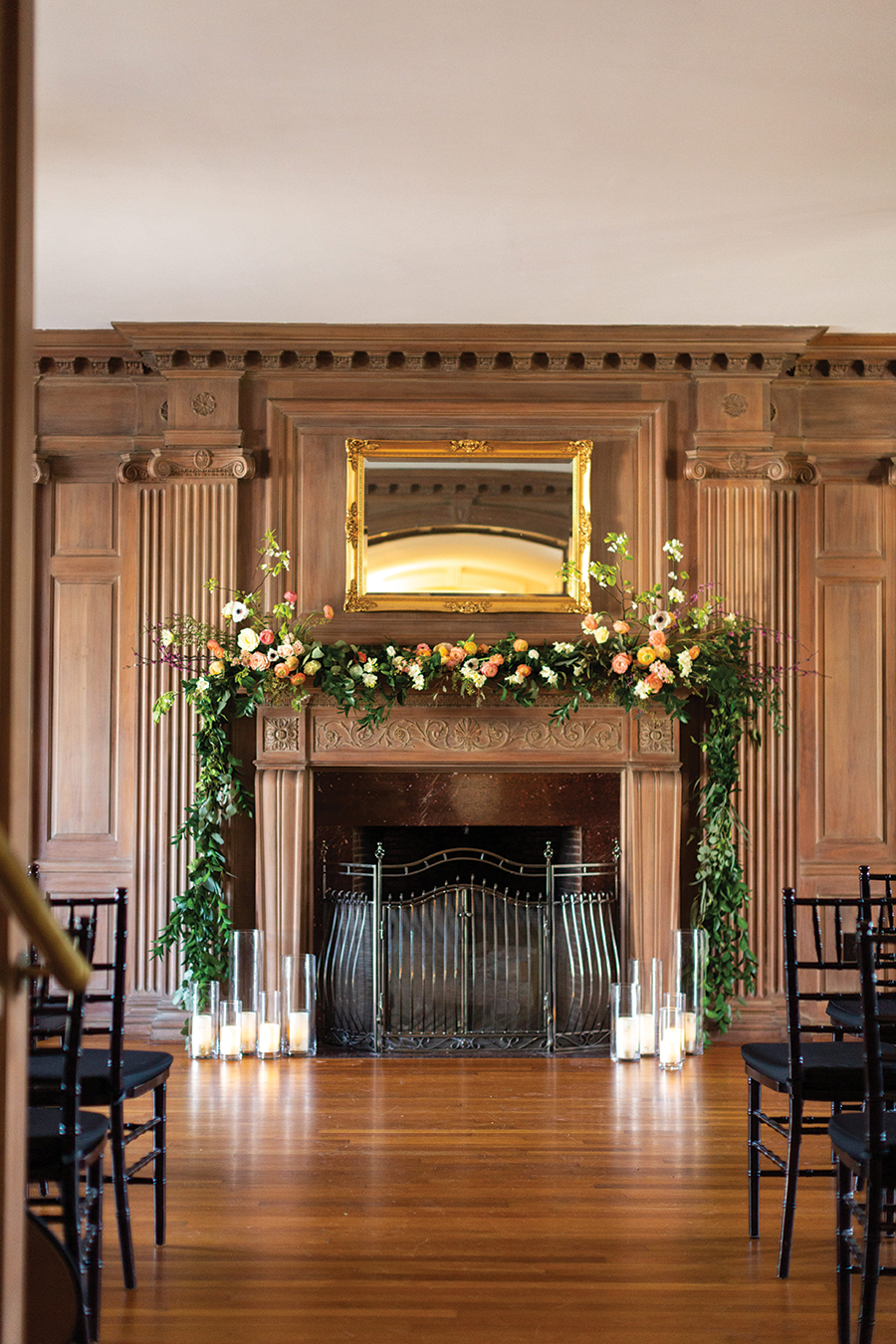 Between Andrew’s experience and Hilary’s artistic eye, Howard became convinced that the couple could work some real magic on a property that certainly needed a lot of love.

Hilary is a rare bird: equal parts scientist and artist. She is a skilled Realist painter by night and manages a high-pressured DNA lab by day. Andrew is a third-generation craftsman who says he “was born” to become a renovator. Together, they complement one another’s strengths.

Which, as it happens, is a good thing when undertaking something as daunting as a well-known mansion languishing in a sad state of neglect and disrepair in plain view on Thomasville’s main street. 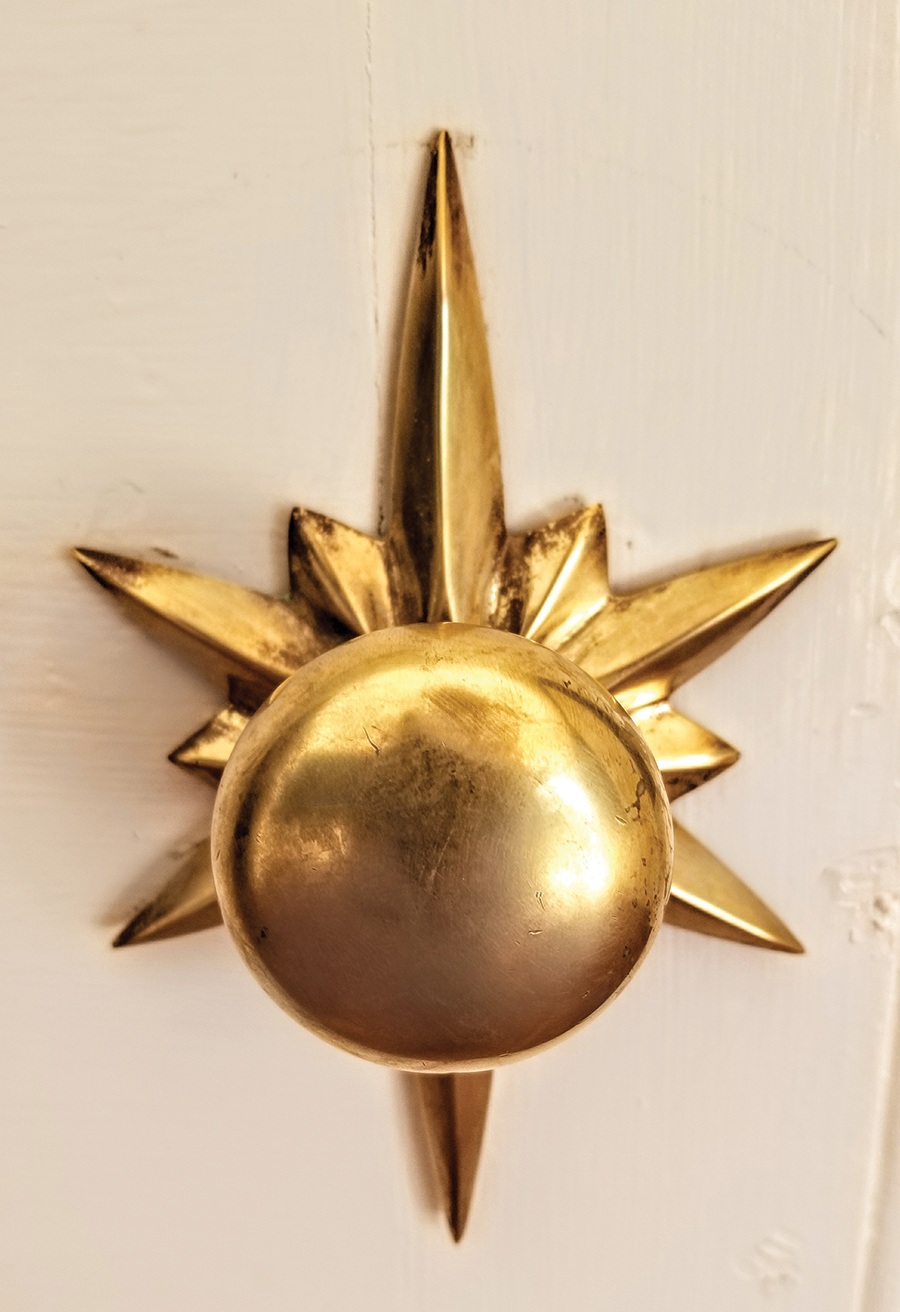 Indeed, this was no small undertaking. It was enormous — scary big even for someone with the Clements’ track record. Six bedrooms, nine bathrooms and 7,000 square feet of all sorts of issues, including rot and moisture. And that’s not counting the carriage house, former servants’ quarters or garage, which would add another 1,300 square feet of space to the project.

“There was some caution and a lot of due diligence,” says Andrew.

They decided that the only way they could make things work financially would be to revitalize the house as an event center. But they would have to battle mold and decay before the first new couple could stand inside its once lovely plaster walls and murmur “I do.”

Perhaps the resident ghost might have whispered in their ear that if they loved the house, a home would one day love them back.

Who can explain love?

In any case, the Clements ultimately responded with a yes — they would love the house back to life. They purchased the Finch property on October 20, 2017.

Andrew had renovated his first old property when he was only 22-years-old — a house even older than the Finch house — a 1902 Queen Anne McLeansville farmhouse. The work inspired him to earn his general contractor’s license, and Andrew has focused upon renovations since.

Now 42, he had 20 years of experience to his credit as proven by scars, scrapes and bruises.

Yet nothing compared to such a grand mansion. And, it seemed karmic.

Inside the Finch mansion’s plastered and paneled walls was a century of history and the physical remnants of its former grandeur. For instance, original wormy cypress was used in a magnificent, intact library, part of an addition made in the late 30s. Fireplaces and surrounds had survived, thanks in part to the fact that there had been few owners and renovations. A delightful and mysterious star motif repeated in the public room. The home’s charming pastel-tiled bathrooms were in surprisingly good condition. Leaded glass windows and rare Jefferson windows were intact, too. 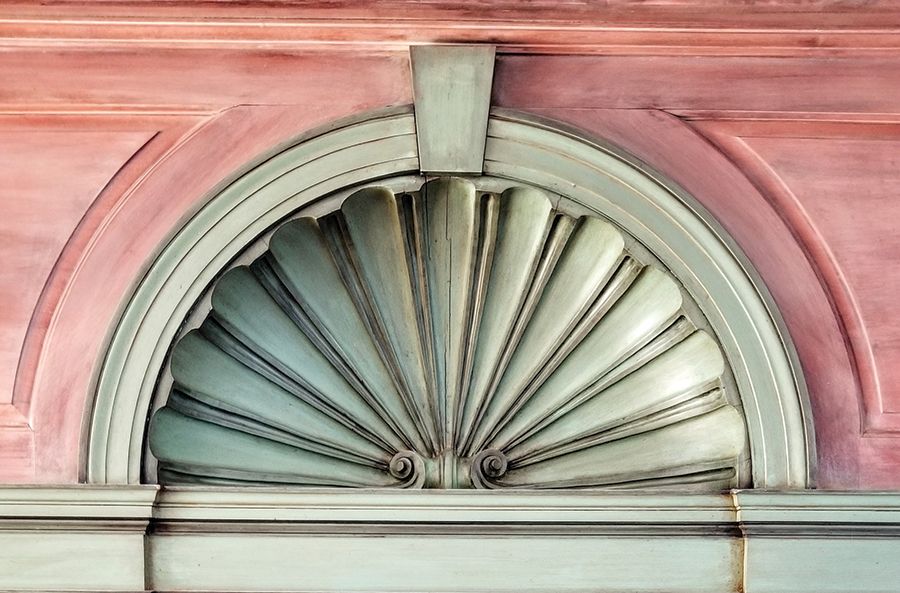 As Andrew grew more convinced it was viable to take on, Hilary was unnerved. “Hilary had a lot of reservations about the property,” admits Andrew. “She didn’t want the renovation to sink us financially, which it almost did. She was also concerned about me stretching myself too thin, which I did also,” Andrew admits. Ultimately, Hilary became persuaded that with their combined talents and determination, they could pull the project off.

“Hilary is our secret weapon,” confesses Andrew. “She has driven and controlled ‘the look.’ We agree on most design decisions, but I defer to her insight. Hilary built our website and runs our social media. This is so helpful in an image-driven business.”

In 2018, the couple hired historian Heather Fearnbach, whose professional assistance furthered the process of getting the home listed on the National Register of Historic Places. The listing was a crucial step in terms of securing important tax credits, which would make the project more feasible.  The application was aided by the fact that the Renaissance Revival home and its occupants were well-documented.  Given the Finches role within Thomasville’s history — Thomas Finch having even served as mayor — the provenance of the restored house was almost synonymous with the town itself.

“It’s really overwhelming at times when you think about who has been in the building and what it has meant to the community,” Andrew told the Lexington i in an interview.

It took the couple a full year to make the house habitable again.

Was there a moment when they thought, “what have we done?” 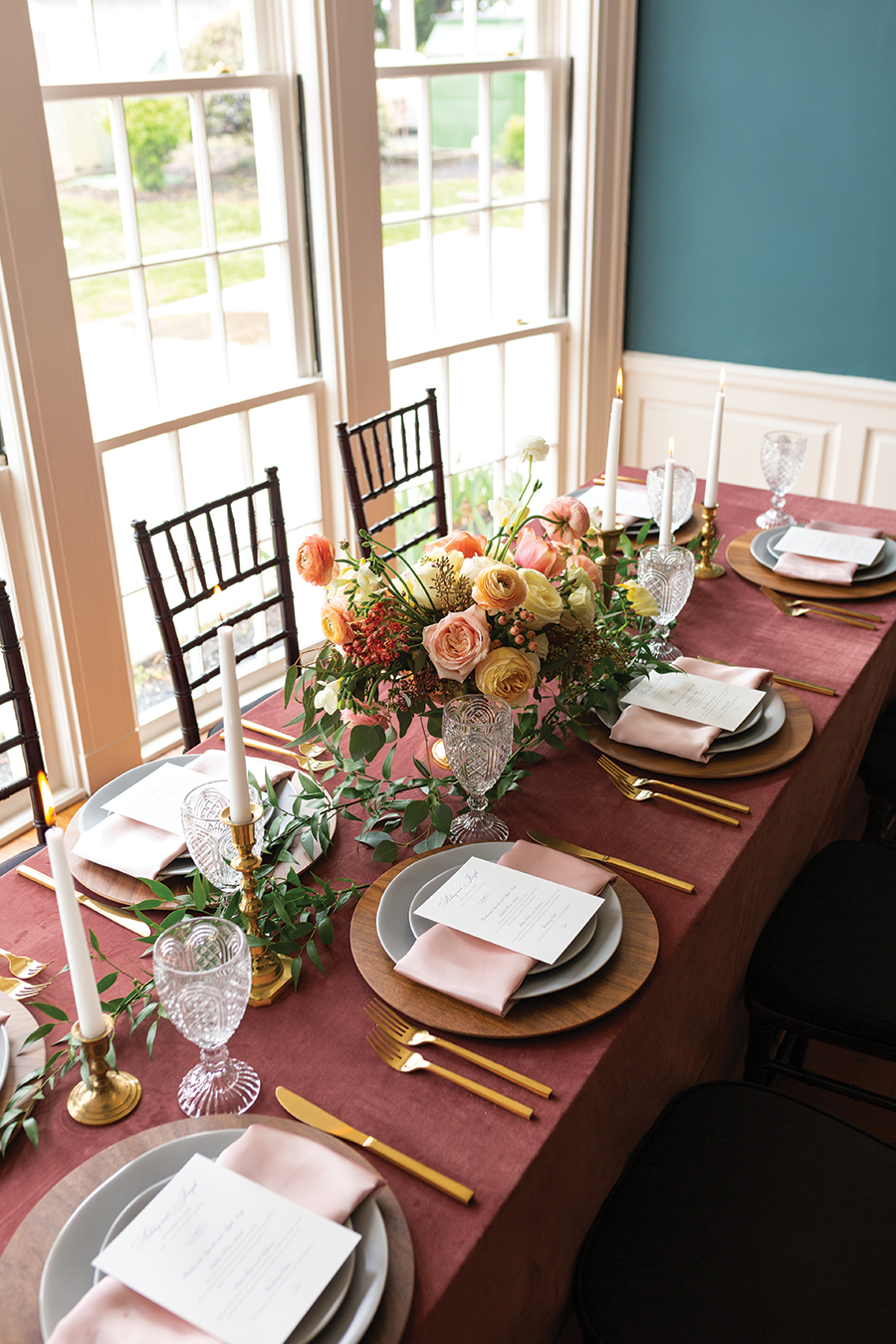 Two-thirds of the way through the project, Andrew admits he “hit a wall,” so to speak.

“I had some serious health issues, and we started to run out of money to complete the work,” he says. “It was at this point that I believed buying this property was the worst decision I had ever made.”

But this love story was written in the stars. Thankfully, at the perfect time and in the perfect way, the Clements were able to complete the renovation.

With the encouragement of family and friends, they hosted the first event in October of 2018.

No longer the private address for the Finches, a powerful couple who entertained North Carolina’s affluent and influential, the historic home is now open as a public venue.

The beauty of the home and carriage house, with an enormous reception tent out back, has attracted a flock of lovebirds, hosting more than 50 weddings over the last two years. 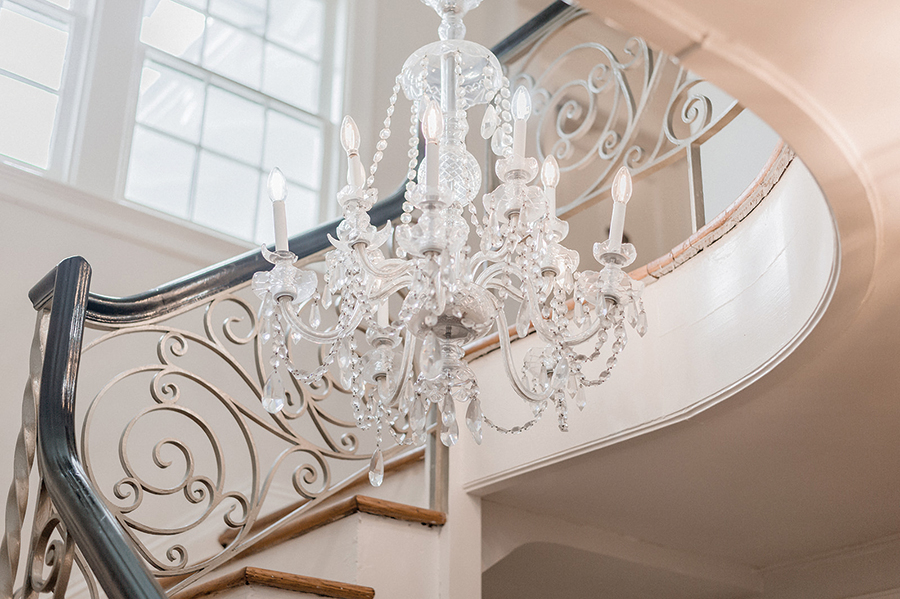 The property is thriving, accommodating as many guests as can be safely organized with the constraints of a pandemic. Given that the story of this house is a tale of two couples, it is so fitting that the property has become a venue where other couples make vows that will determine the course of their lives. And it is uncanny how many parallels exist between the original owners and the couple that brought their home back to life.

Whereas the Finches were instrumental in modernizing and growing the furniture business, they were also deeply civic-minded, like the Lambeth family. The Finches lent considerable money and support to public projects, ambitious ones ranging from schools and hospitals to libraries.

Like the Finches, Andrew had also had a long commitment to public service. Howard notes, “He’s always chosen his career by the contribution to society.”

Andrew balances work as a project manager for Community Housing Solutions, a nonprofit that provides home repairs and new houses for low-income homeowners in Guilford County. “Community Housing Solutions (CHS) began in 2002 under the name Housing Greensboro,” he says. “CHS was formed in partnership with the Center to Create Housing Opportunities, Greensboro Housing Coalition, Habitat for Humanity of Greater Greensboro and the City of Greensboro.”

The house was formally listed on The National Registry of Historic Places on August 26, 2018. 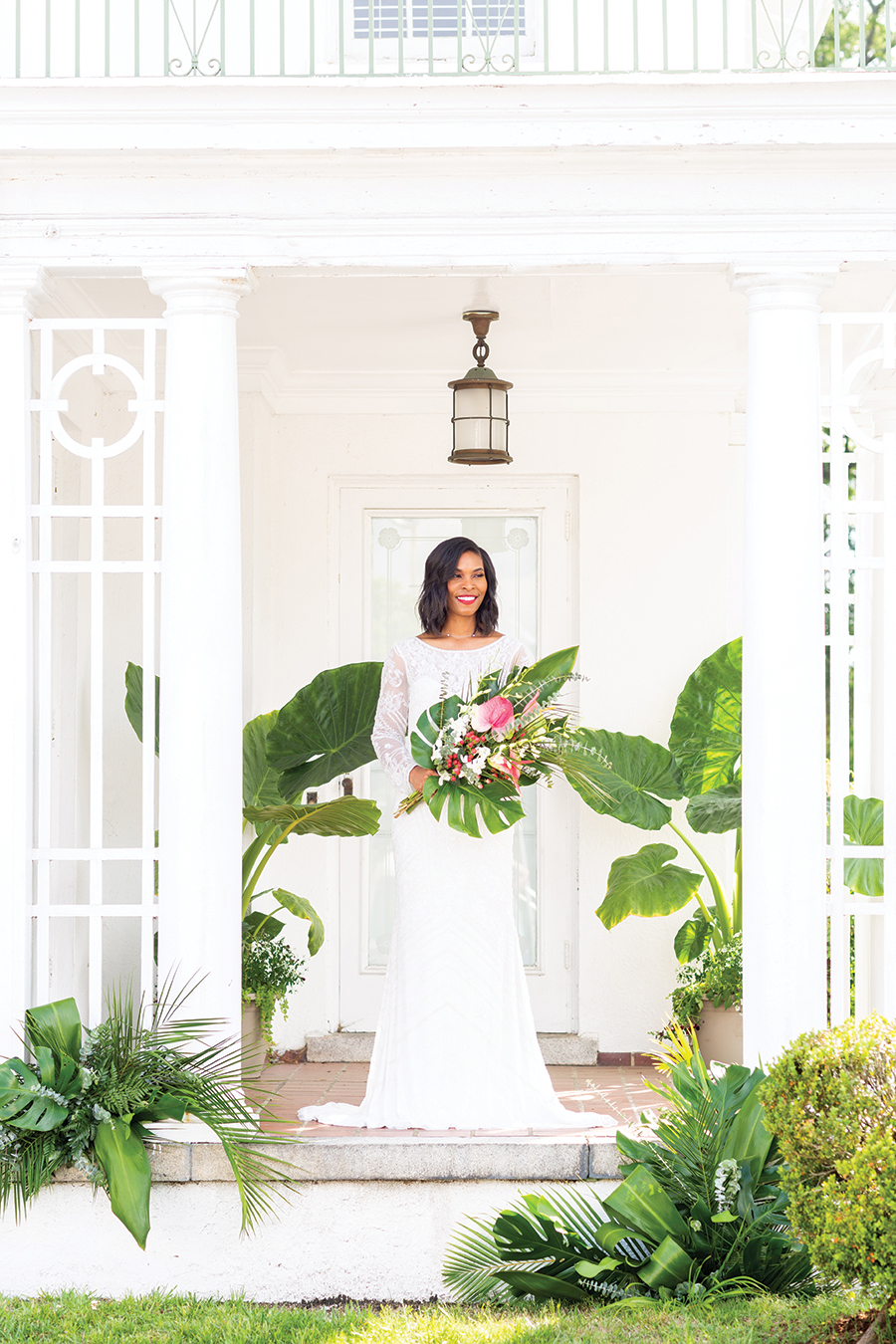 “Grandson David Finch has visited to see the restoration. Great grandson Justin Finch has also visited with his wife. Both have been appreciative,” says Andrew.

Former Thomasville Furniture employees have also come to see the house, which was occasionally open to them long ago for special Finch-family events.

Hilary keeps an art studio upstairs where she paints on weekends. She also chooses treasures for the house. Ones that “feel right,” says Andrew.

Would the house’s resident ghost approve of them?

The rugged Andrew pauses, smiles, then admits something as long shadows fall across the dining room, which retains its triple-hung sash windows.

“We have never spent the night and have no intention of ever living in the house.”

After being pressed, he merely grins — or grimaces — enigmatically.

“Some of the local police and other residents swear the house is haunted. I do have to admit I’ve been weirded out a few times being in the house all alone when it’s dark.”

With darkness falling, Andrew flicks on a flashlight, gives a little shrug, and we both make a hasty exit.  OH

For more information about the T. Austin Finch House, visit www.the-finch-house.com. To see Hilary’s artwork, visit www.hilarypaints.com. And to view the Clements’ renovation of their Glenwood bungalow, visit bungalowandbackyard.blogspot.com.