When Daniel and Kathy Craft decided to update their kitchen, they found themselves looking more to the past than the future

Has anyone ever been to a lively party where the most entertaining folks didn’t congregate in the kitchen? It’s the heart and hearth of a contemporary home, a place for relaxation and creative activity, the only room where the entire family daily congregates. That always presents a genuine challenge for interior designers, but even more so when they’re tackling one of the city’s most revered mid-century masterpieces. 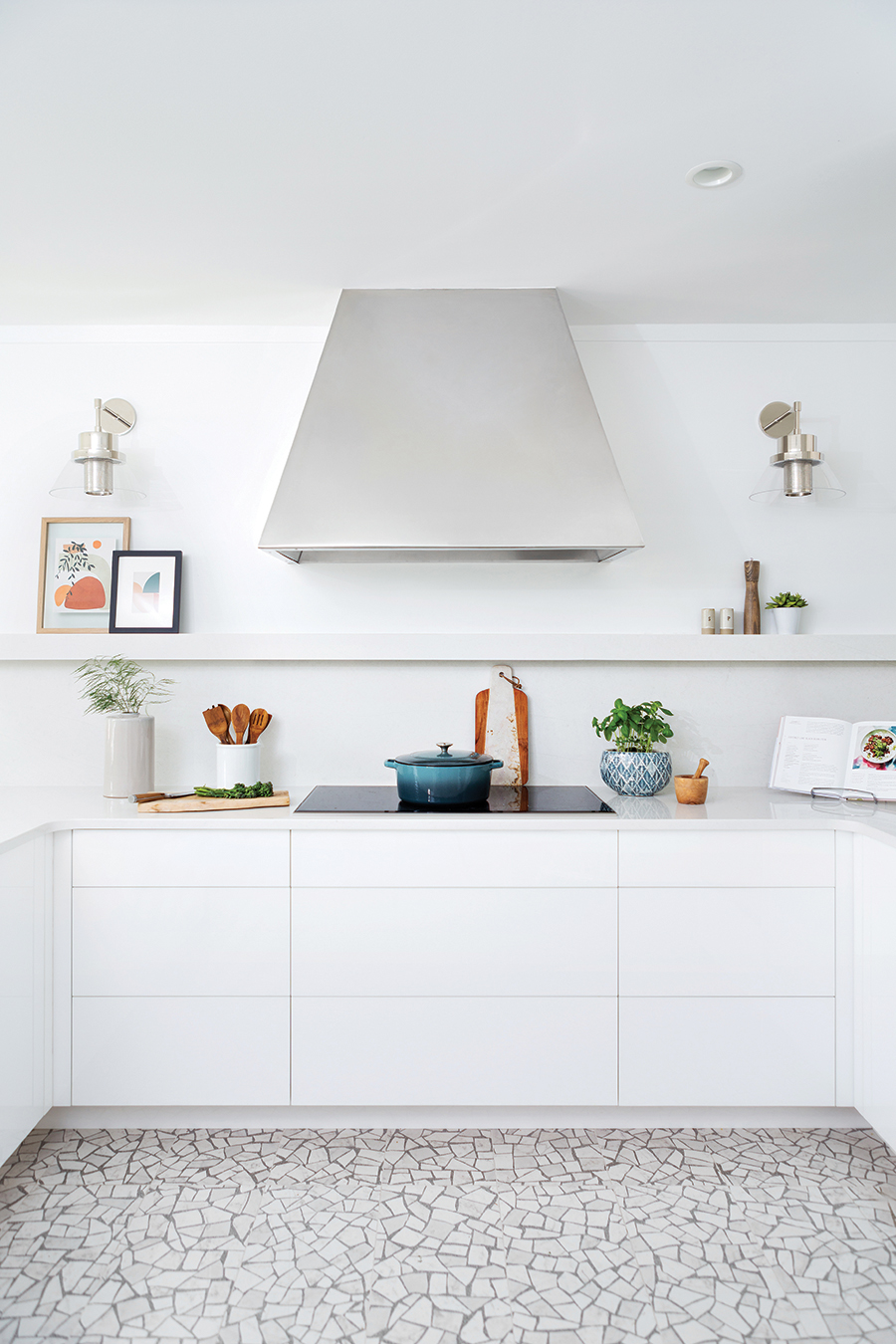 “We knew we wanted a Loewenstein,” Kathy Craft says of her and husband Daniel’s search for the perfect home more than a decade ago. They had looked at almost a dozen houses in the Irving Park area designed by famed architect Edward Loewenstein before contacting Lee Carter about the status of the home he grew up and lived in. Was he willing to sell? “Lee contacted us six months later,” Kathy recounts. He told them he would consider an offer, but “wanted the house to remain as is — they wanted it taken care of,” she says. “I walked in, got six feet into the door and I’m like, ‘I don’t even need to see any more.’”

Katie Redhead of Tyler Redhead and McAlister Real Estate is not surprised by the Crafts’ experience. “It’s amazing how we are seeing more demand for the mid-century Loewenstein designed homes,” she says. Sadly, many of Loewenstein’s finest homes fell prey to the bulldozer over the last two decades as developers valued the acreage more than the heritage. “Right now we’ve got such high demand, if one did come on the market I think it would be very well received. And I probably wouldn’t have said that 10 years ago,” Redhead says. 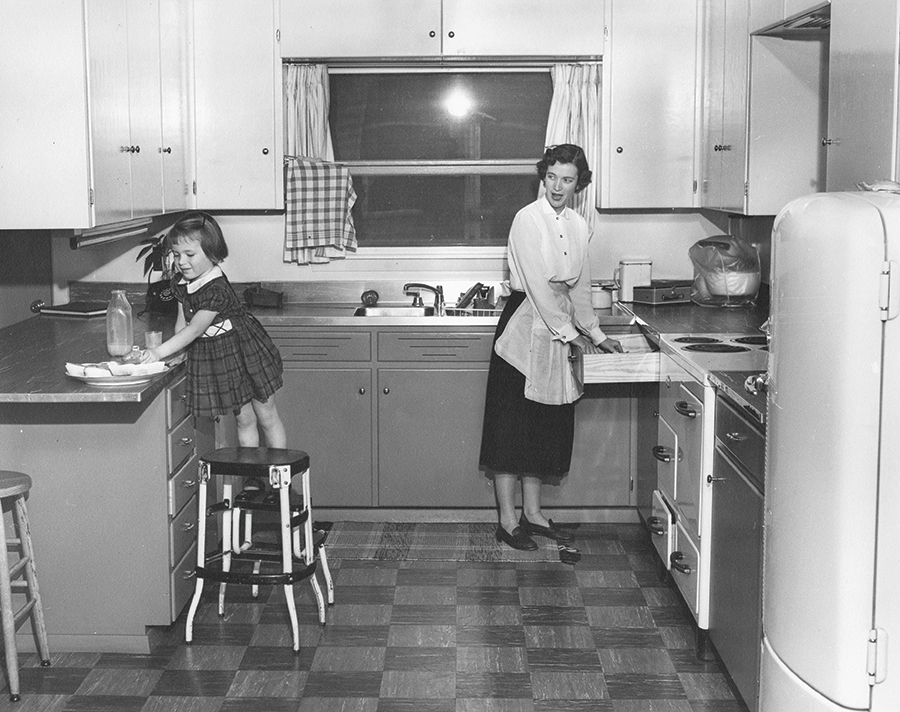 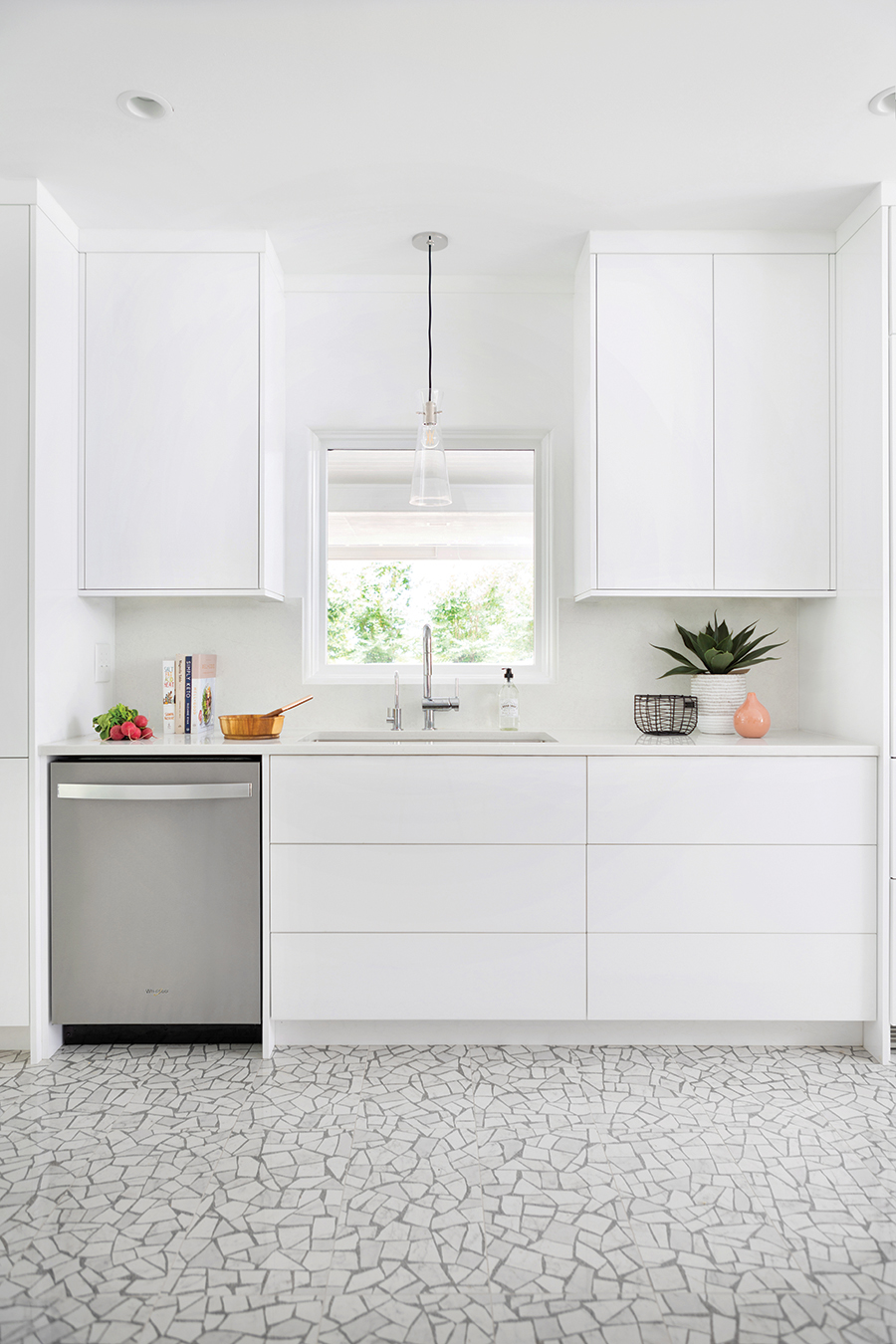 Designed for Wilbur and Martha Carter, the Carter House, located on Country Club Drive, was the architect’s first fully realized Modernist design. Completed in 1951, Loewenstein’s signature can be seen in the integrated carport, slate floors in the common areas front and back on either side of a spacious dining room, the enormous fireplace serving as a load bearing wall, and an array of picture windows encircling the home to allow the majesty of the verdant outdoors into every room.

“We replaced all the windows,” Kathy Craft says. “We’ve been here 16 years and it took us that long to do all of that.” Organized around an L shape, exterior flourishes, repeated in the interior, include native bluestone, brick walls and wormy-chestnut siding. The yard is so large, extending all the way to Cornwallis, there was space for a horse stable.

Influenced by the Usonian houses of Frank Lloyd Wright, the Carter House is literally a work of art, recognized so by the National Register of Historic Places in 2008. “I would say the Carter House, for Loewenstein, put his signature on the map in terms of what he could accomplish,” says Patrick Lucas, director of the School of Interiors at the University of Kentucky and author of Modernism at Home: Edward Loewenstein’s Mid-Century Architectural Innovation in the Civil Rights Era. 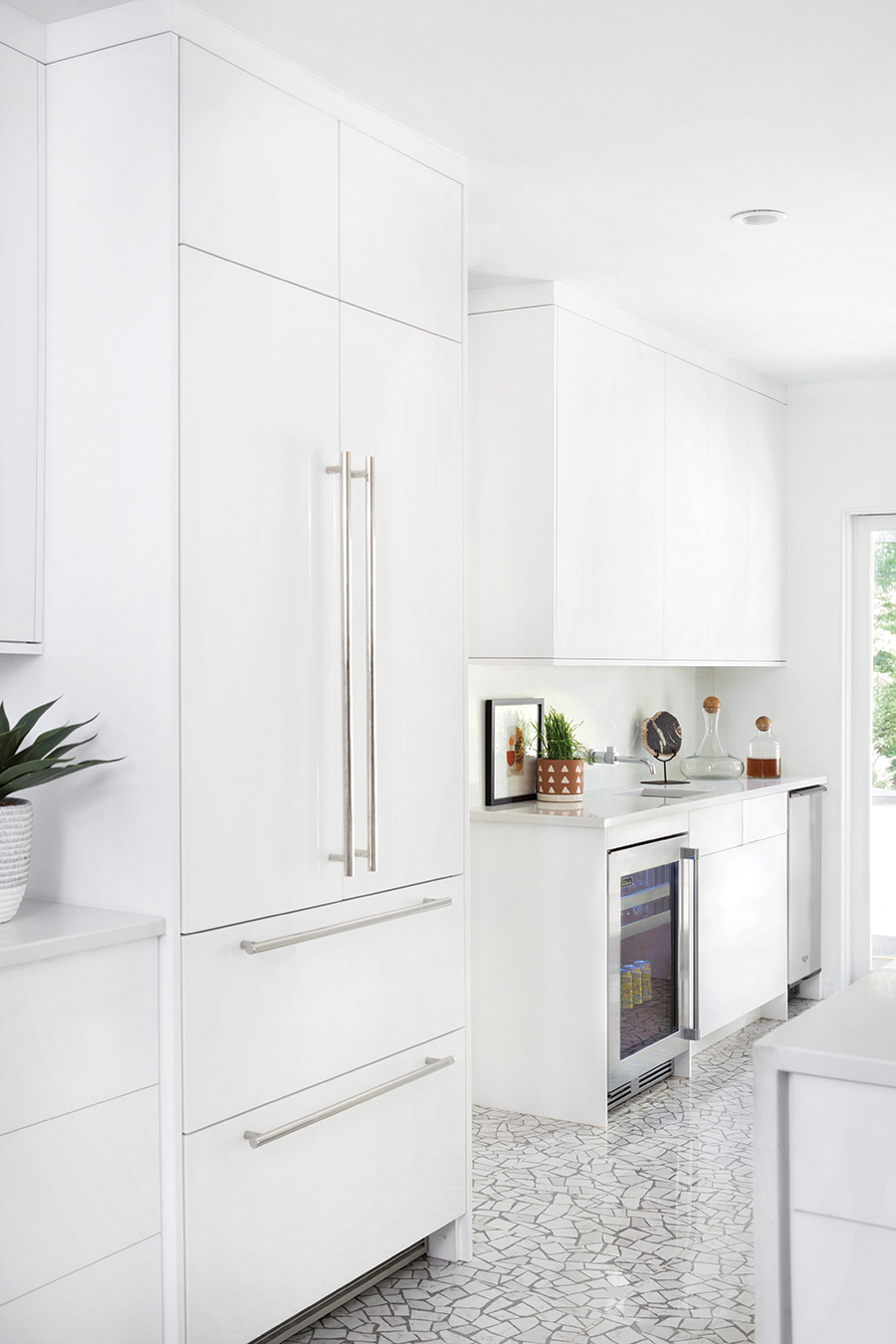 According to Lucas, who was on faculty of UNCG from 2002 to 2013, there are probably 20 or 25 of Loewenstein’s houses still standing, “Sprinkled here and yon through the Greensboro area,” he says. “Some in Irving Park. There’s a great one in Pleasant Garden. There’s one in Sedgefield.” In his opinion, the Carter House is one of Loewenstein’s finest, “certainly in terms of the big ones that he was known for. It’s a really splendid home because it has an extra room on the front that is sort of a double living room. It’s a pretty brave space and, as a result, the house is quite open.”

“It had good bones,” Kathy Craft says of the home when they took possession. Because of the engineering bent of Loewenstein’s firm, his homes were almost overbuilt, so solid they don’t have a lot of issues that modern buildings develop over time. “It needed a lot of cosmetic work, ripping the shag carpeting out, stripping and painting, phone lines and curtains, while trying to keep everything as minimal as possible,” Kathy says.

Other than updated appliances, the kitchen hadn’t changed significantly in nearly 70 years. “We lived with the original kitchen the entire time,” Kathy Craft says. “And I was fine with it but Daniel said, ‘Let’s blow it up.’ I wasn’t the instigator there, for once.” 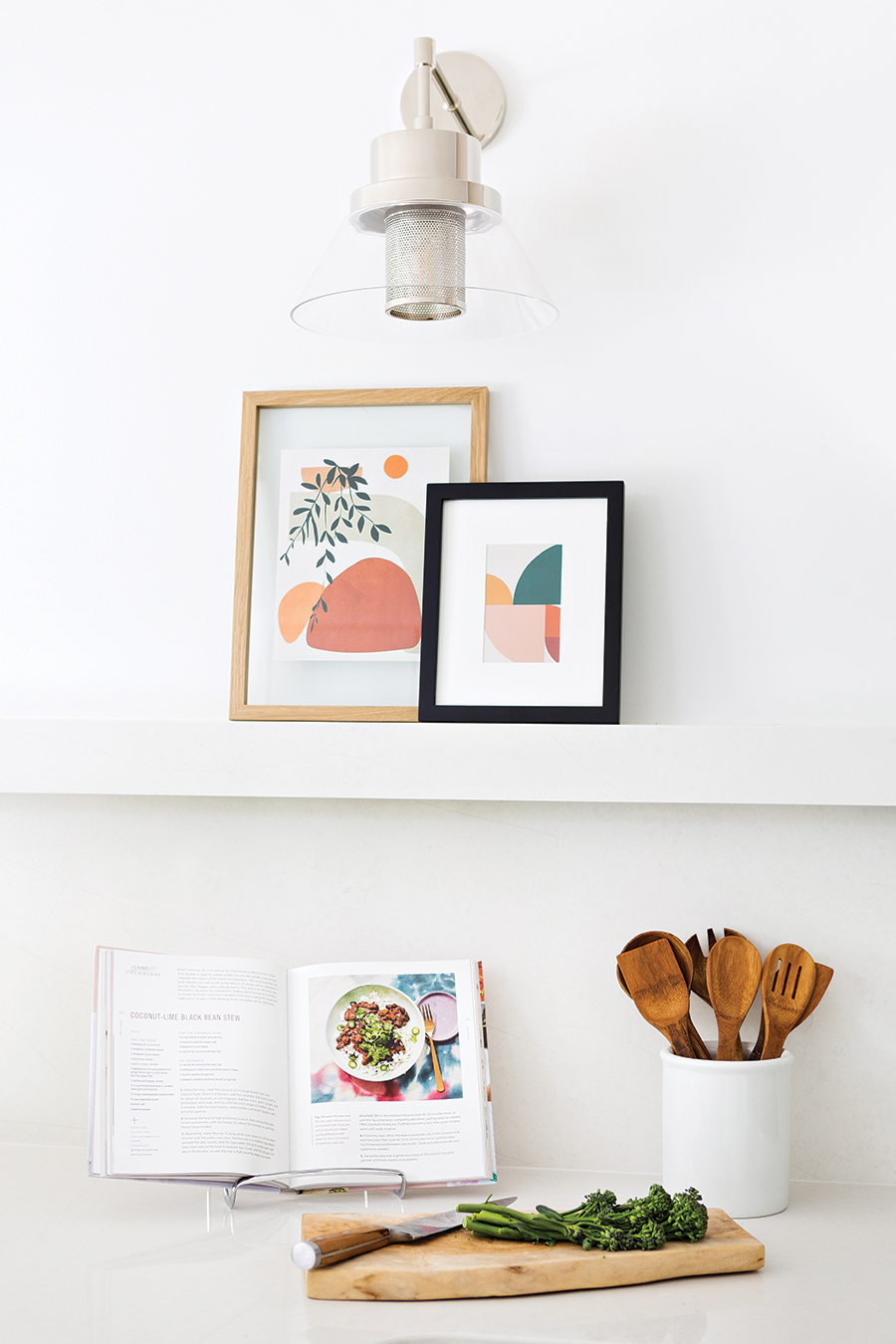 That’s when Emma Legg and Sydney Foley of Kindred Interior Studios were brought in to reimagine that space. “One of the reasons we named our company Kindred,” Legg says, “is that it’s really important to us that each and every project reflects our client’s style and taste, their wants and needs. When someone walks into a space we’ve designed, our goal is for that person to say, like in this instance, ‘Oh, this looks perfect for Daniel and Kathy Craft.’”

“We were just both so excited about the project,” Foley says. “When we pulled up we knew it was going to be really fun because we could get really deep into a project like this because there is such a specific look.” Not only were they going for a mid-century Modern look, “We’re also looking to do the whole house justice because it’s a historic home, it is going to be noted, and we want to make sure we’re doing old Ed [Loewenstein] justice, as well as the Crafts.”

“One challenge that we had is, Kathy and Daniel are both minimalists,” Legg says. “The wall that their range is on backs up to their dining room and it’s rather long. They were pretty adamant that they did not want to fill that wall with upper cabinets.”

That’s when they came up with the idea of adding a thin wedge of shelving above the range that rounds the corner into the housing for the oven and microwave. “This gave us an opportunity to bring the countertop up as a backsplash without going to the full wall,” Legg says. “This keeps the lines very clean but at the same time gives it just a little bit of interest, to keep from being boring. We also added wall sconces for additional cast lighting while they’re cooking and also if they wanted to display any objects, to highlight those as well.”

“We can make anything beautiful,” Foley says. “But for us the measure of a successful kitchen is about function, and how the work flows.” That’s why they worked in tandem with Pat Parr of Classic Construction. There’s a rule of thumb for interior designers called the “Work Triangle” that incorporates a room’s three main items — in this case the refrigerator, sink and range — and how that space functions within the floor plan. “Are you able to get from A to B without having to climb over your island, that kind of thing,” Foley notes. “We get very detailed with our clients about what’s going to be in each drawer, what kind of features do they require, do they need peg storage for dishes, layered storage for silverware?”

The original floors were concrete topped with vinyl-asbestos tiles, all the rage in the fifties. “The Crafts wanted a real terrazzo floor,” Legg says. “Based on the quality of the concrete and the amount of work that they were going to have to do, real terrazzo was not feasible. After a lot of research, we came up with a porcelain tile that looks like terrazzo and, once installed, we felt like it was really beautiful and it did mimic the real thing.”

The result is an oasis of luxurious simplicity with inviting lines reflected in flooring that shimmers in the light. “A lot of other kitchens we’ve seen had a kind of identity crisis,” Foley says. “People try to cram too many design features into a kitchen. Sometimes we just find that less is more in some situations.”

As for the Crafts, they love their sleek, state-of-the-art kitchen. “Oh my gosh, I had no idea it would change my life so much,” Kathy says. “I always liked the old kitchen but now that it’s all new, it’s like, wow, this is really nice. We spend a lot of time there and I haven’t gotten at all tired of cooking over these last few months. It makes day-to-day life much easier.”  OH

Billy Ingram is a former Hollywood movie poster artist and the author of five books.

When the Carter House won the American Institute of Architects’ N.C.  design award in 1951,  Edward Loewenstein explained his design process to a colleague:

“We started working with the Carters on an extremely contemporary house . . . A local contractor estimated the house and they decided they would rather have a traditional Georgian house. We completed drawings on this, through the working drawing stage and obtained an even more outrageous estimate . . . [Ultimately,] the Carters decided to let us carry the project through as a contemporary project. As it progressed, their parents, who were very conservative, had become very enthusiastic about it and we have received violent comments in both directions from neighbors and friends.”

Loewenstein wasn’t just a mid-century master but a civil rights pioneer in Greensboro. In the early 1950s, he became the first white architect in North Carolina to employ African-American designers to work alongside him. In addition, he also offered opportunities for women to enter the field.