On down the road, seeds for a bright and beautiful future have been sown

My destination is a 600-acre retreat in the foothills of the Uwharrie Mountains — just outside Norwood, about 70 miles south of Greensboro.

Most vehicles on the highway are log trucks. The rolling hills are thick with pine and hardwoods. Cattle loll by hayricks and calves frisk and butt in roadside pastures.

I turn onto Old Cottonville Road. The name tells you something about the farm history here.

Cotton’s still grown in the North Carolina Piedmont, along with crops for livestock. But essential topsoil is eroding away. Conservationists say this area has some of the poorest soil in North Carolina.

On Old Cottonville Road, I spot a metal plate announcing, “Juneberry Ridge.” The drive rises steeply up an allée of young maples, with swales cut to catch runoff from the slope.

I pass what’s known as a Five Stand. With heaters to warm shooters in winter and misters to cool them in summer, five shooting stations, an outdoor kitchen, a gathering space and loads of technology to support media presentations. Juneberry Ridge might be the finest competitive clay-shooting facility on the East Coast. 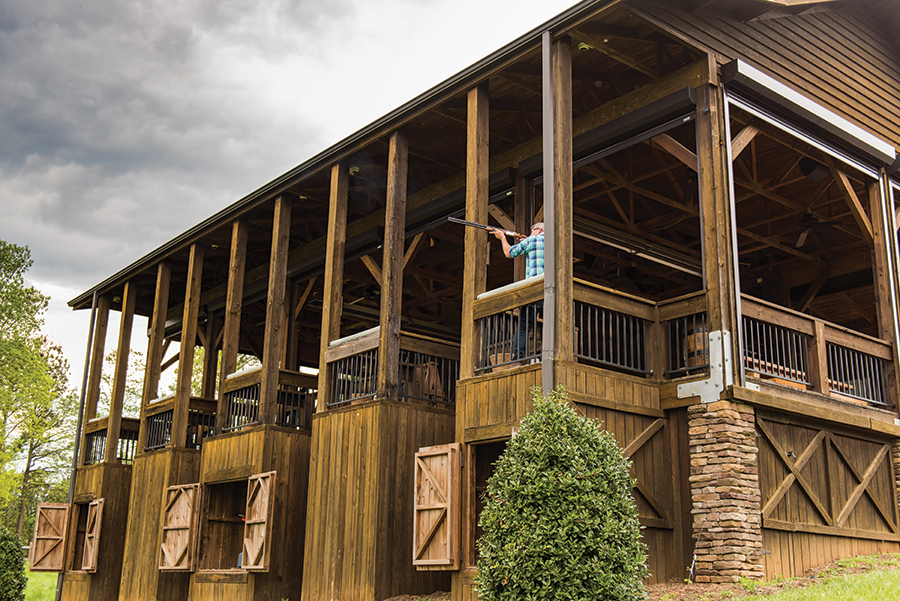 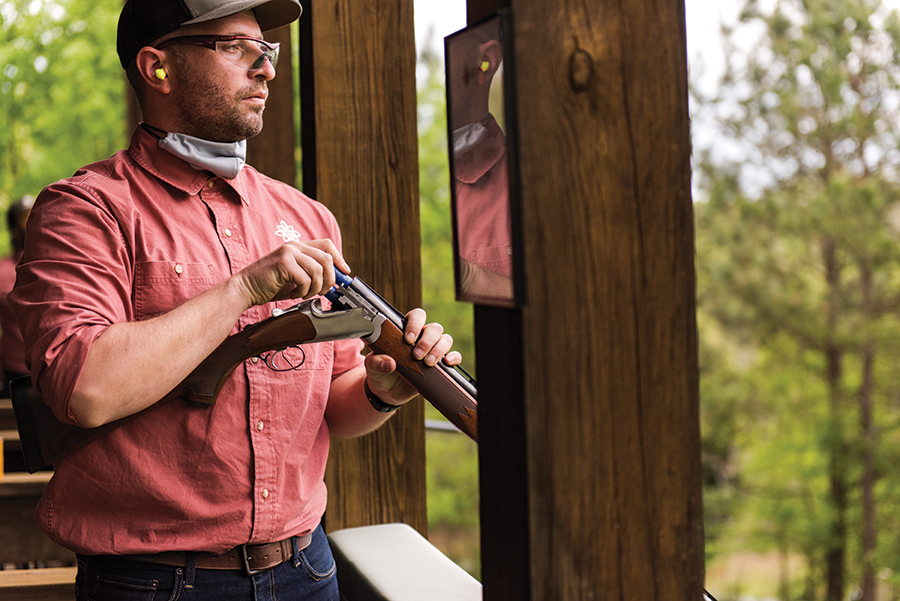 The Five Stand was built by Judy Carpenter of Charlotte.

Rising through the ranks of National Welders Supply Company, a regional business started by her father, she reaped full value for that enterprise through hard-nosed negotiations to a national distributor.

She also happens to be a champion clay target shooter.

When someone told her that, as a woman, she needed to find someplace else to compete, she bought this land and built herself one.

Everybody at Juneberry Ridge calls her “Miss Judy.” She’s a genial, plain-spoken woman who could well be the most determined person on the planet.

Farther up the ridge I see an expansive log house. First built as Miss Judy’s residence, it now houses a handful of the more than 30 individuals in her full-time employ. Beyond the house is a sizable solar array and a wind turbine.

Rob Boisvert greets me outside.

A retired news anchor for WSOC-TV and Spectrum News in Charlotte, Boisvert is the business development manager for Juneberry Ridge. I follow his car downhill past a conference center known, because of its proximity to a pond, as the “Toad House.” The building features more state-of-the-art technology and a commercial kitchen that can serve 70.

Driving up another ridge, we pass tennis courts, and at the crest, a wellness center, cabins and a cottage.

We pull up at Longleaf, where I’ll be staying. 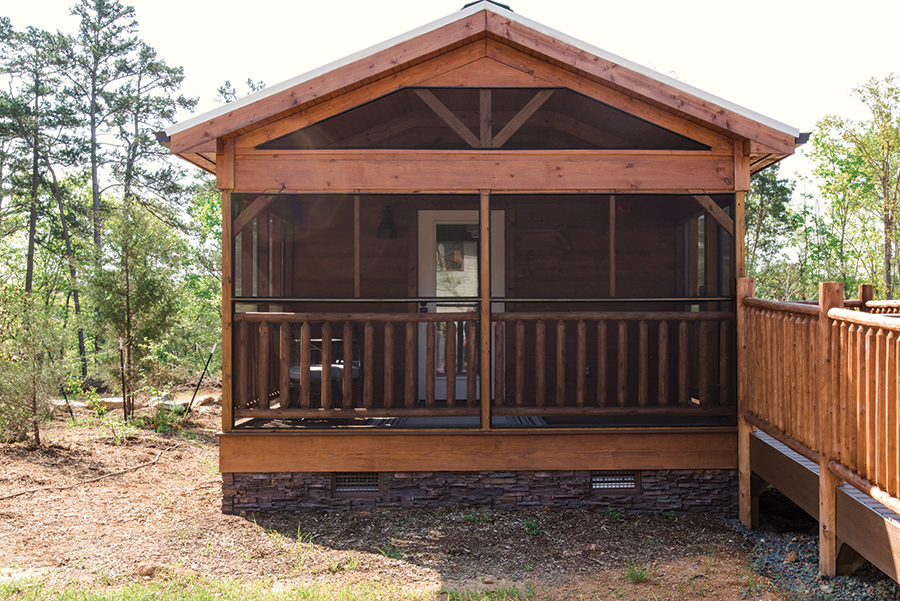 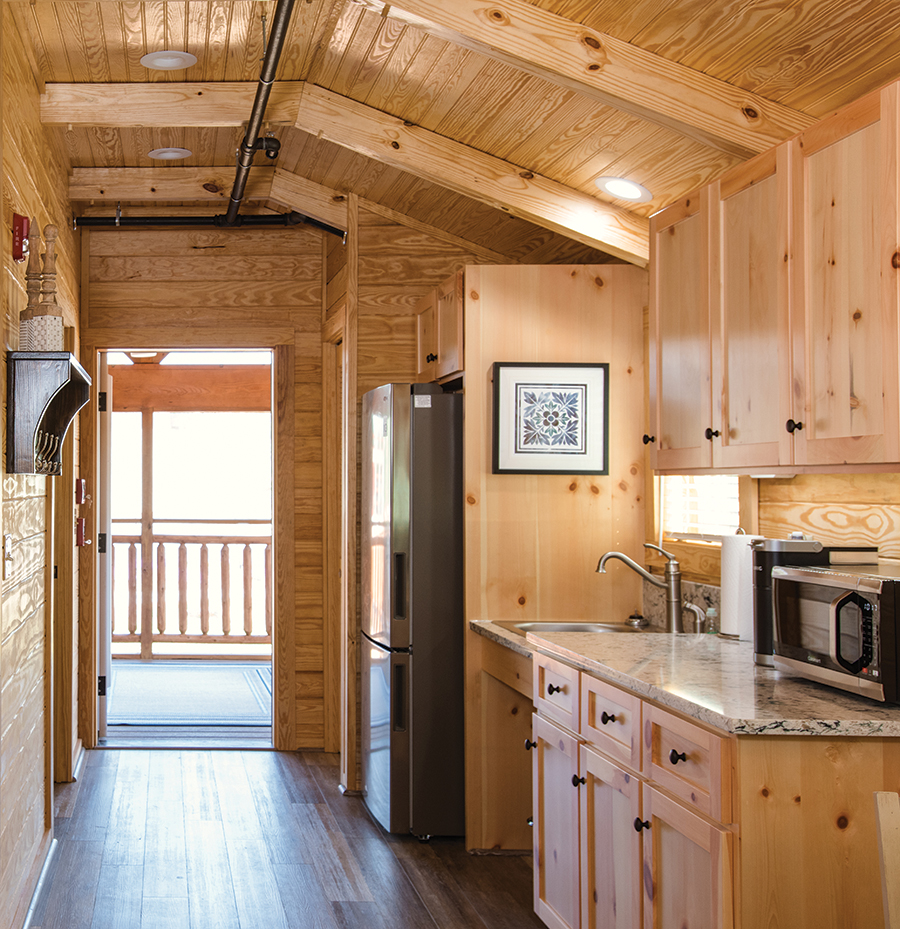 It’s an airy, light-filled, three-bedroom cottage with a vaulted-ceiling great room. Other cabins were built by Juneberry Ridge employees with lumber harvested on the property and milled nearby.

The details are both simple and exquisite. In the refrigerator, for instance, I find a salad of lettuce grown in Juneberry Ridge’s 45,000-square-foot greenhouse and fresh vinaigrette dressing made by head chef Tiffany Lackey, the hospitality director.

I get it. I’m in a bucolic spot that’s an easy drive from Greensboro, Charlotte or Raleigh. It’s ideal for a weekend getaway outdoors. It’s perfect for a productive corporate retreat.

But Miss Judy tells me what Juneberry Ridge is really about.

“We’re kind of about saving the world,” she says.

After lunch, two members of her young team meet me at the wellness center.

Lead designer and Davidson biology grad Ross Lackey spreads a map across a table. After traveling the country, working on organic farms through the international movement called Worldwide Opportunities on Organic Farms (WWOOF), he returned to his hometown of High Point to work at Lindale Dairy. Later he ran a farm business in South Carolina. He consulted at Juneberry Ridge before joining as an employee.

On the map, he points out a small building near Hardy Creek, which he says was the first greenhouse on the property.

“The idea was that the greenhouse would supply food for Miss Judy and all the employees,” Lackey tells me. 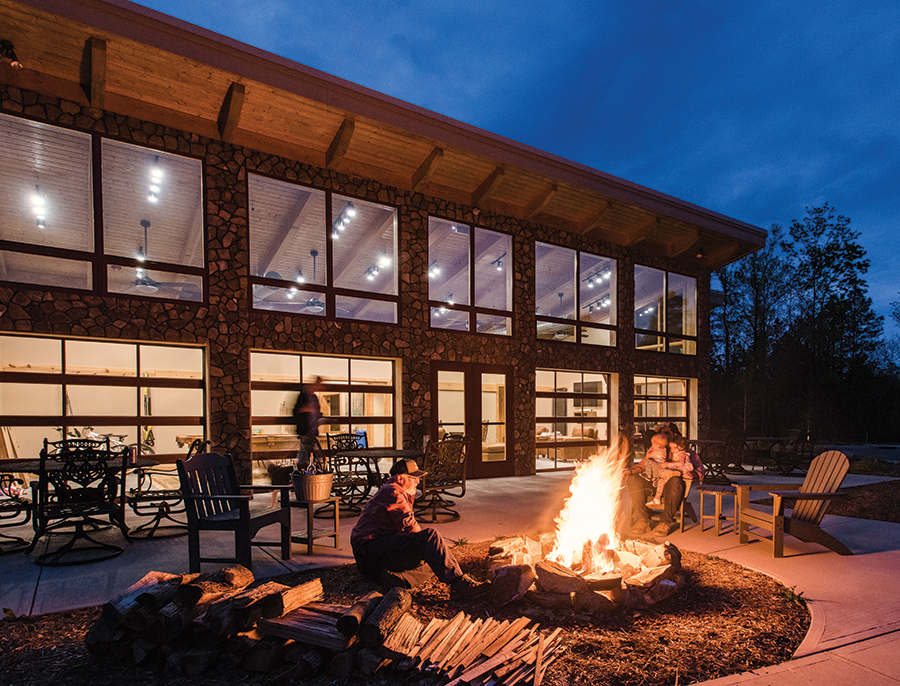 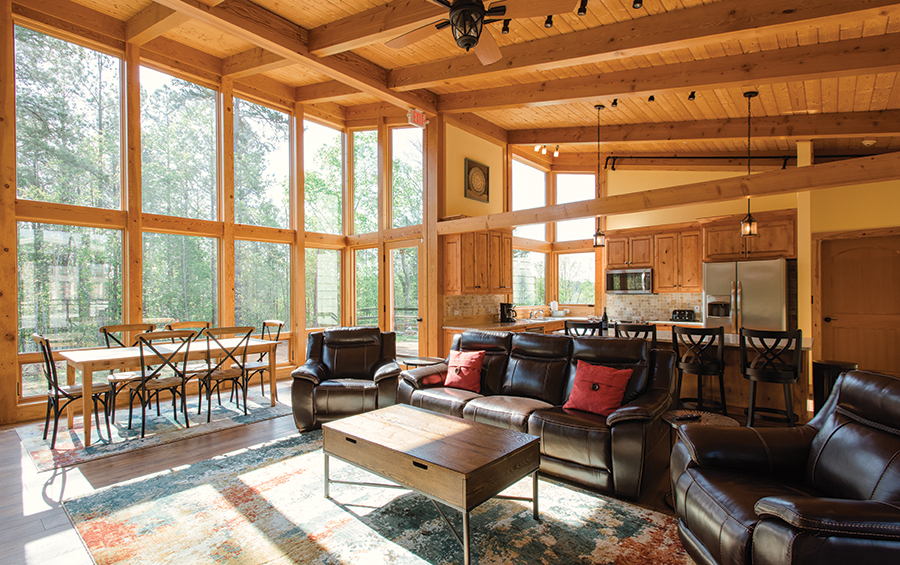 “That little greenhouse is where farming here was born,” adds farm manager and Appalachian State graduate Brian Hinson. Before joining Juneberry Ridge, he worked for the town of Norwood while tending to his family’s 500-acre farm.

Farming at the Ridge got started with a small aquaponics system where the fish (tilapia) waste provided nutrients for the plants and, in turn, the plants filtered the water for the fish.

We chat a bit more and climb into a pickup for my tour.

As we enter woodlands, Lackey, a certified mushroom forager, says, “The morel mushrooms will be up soon. And we’ve found some lobster of the woods down there in the hollow.” As part of a plan to build miles of bike and hiking trails, Lackey will one day lead visitors on foraging hikes.

Trained as a permaculture designer by the Greensboro Permaculture Guild, Lackey explains that an important tenet of permaculture is the notion of “right livelihood,” meaning that practitioners should not harm other living beings. It’s all about emphasizing biodiversity and natural systems, while creating jobs.

“Miss Judy takes a very long view,” Lackey says. “She’s making it possible for us to build an infrastructure that will employ people now and in the future, paying a good wage with benefits.”

Lackey explains that mature crops of chestnuts, walnuts and pecans may require 10–15 years of growth. Meanwhile, there are plans to plant a scuppernong vineyard. Quicker maturing crops like chinquapins, blueberries, mulberries, pawpaws and persimmons are being planted now.

We stop at a dilapidated farmstead, where parts of the house date from the 1830s.

Hinson points out a thick rock wall that’s waist-high and follows the contour of the hillside. 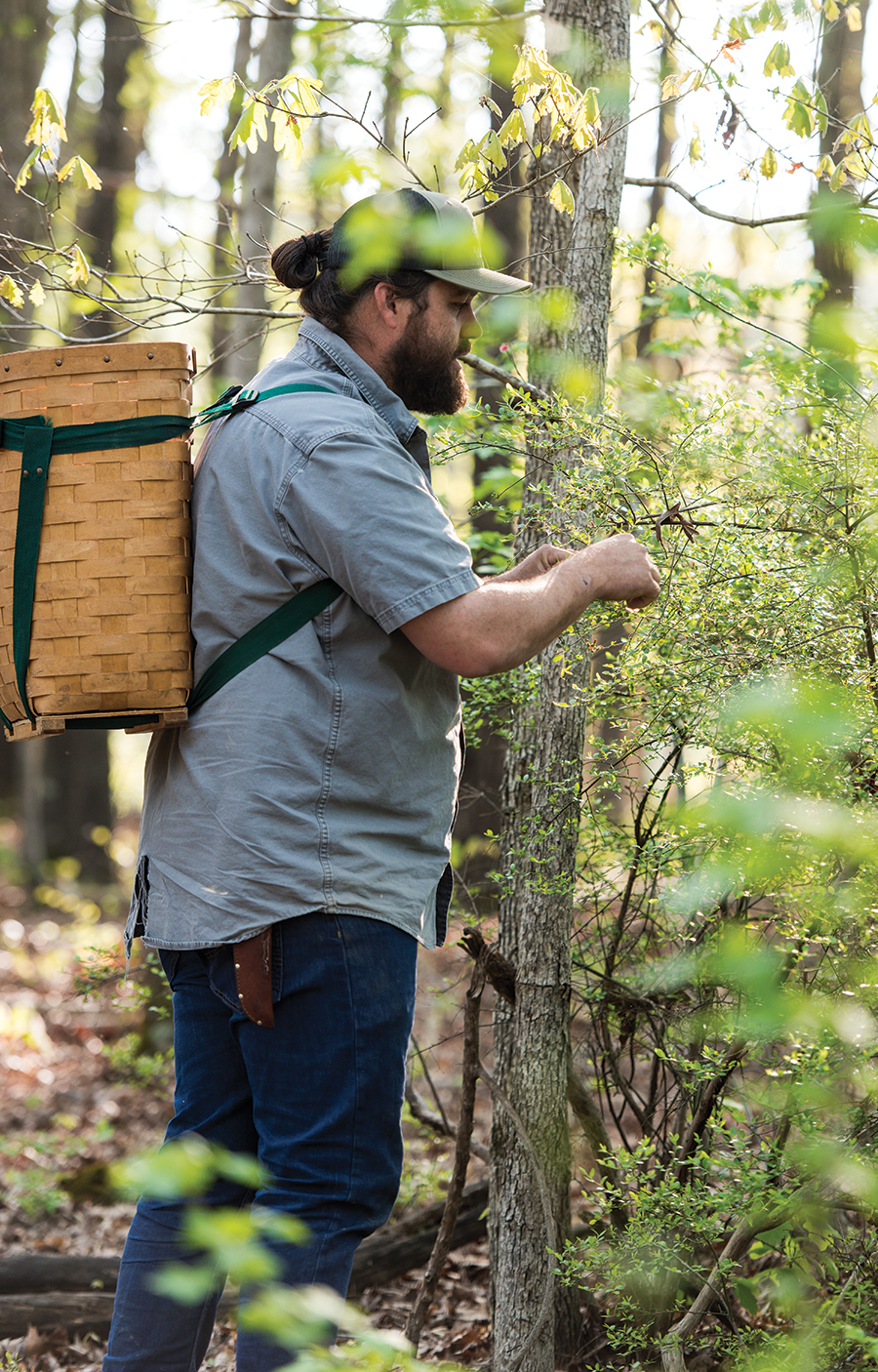 As they point out various sights on the property, including the earthen berms on the drive up to the big greenhouse, their reverence is palpable.

“It’s like a game, seeing how long you can get water to stay in the environment,” Lackey comments. “Any farming system that’s lasted longer than 200 years has intricate water management systems.”

At the massive greenhouse, we’re met by more members of the Juneberry Ridge team. Here’s where the farm’s transformation comes clearly into focus. The engine of change?

“When anybody is talking about an animal that’s good for fertility,” says Justine Carpenter, who runs the farm’s logistics and livestock, “it’s a polite way of saying that the animal produces a lot of poop.”

Nearby, 30 hens wander contentedly in a grassy area defined by an electrified mesh fence. Carpenter tells me they’re heritage birds — Rhode Island Reds and Barred Rocks — long-prized for their egg-laying.

“They’ll give us about 10 dozen eggs a week, not a lot, something we can serve in the kitchen,” says Carpenter.

They’re entertaining. Funky and feathered and scratching about in the grass. About once a week, the fence and hens will be moved to a different area of the farm.

From behind the greenhouse, a sloped field is visible. A year ago, it yielded soybeans and corn. Now it’s planted with grass and rows of trees and bushes that follow the contour of the hill.

Almonds, grapes and blackberries will be added to the rows, and in a year or two, Hinson tells me, livestock will graze in the alleys.

“We’ll use portable fence,” he continues, “so we can keep rotating the animals, spreading manure to have positive impact across the whole farm.”

A flock of white chickens (Cornish Roasters) pick and kick at the earth nearby. Like the laying hens, the Cornish Roasters are inside a portable enclosure.

This is the team’s inaugural set of meat birds. The target is to raise 1,000 Cornish Roasters for processing. They’ll yield upwards of 3,500 pounds of chicken to serve from the Juneberry Ridge kitchens.

“These birds eat locally grown and milled grain produced on a fifth-generation farm,” Carpenter adds. “They’ll be processed at a facility that’s only 15 miles away, so we’re really keeping these birds local.”

I walk inside the expansive greenhouse with Hinson, along with head grower Gabe Calkin and quality and production manager Stephen Hileman.

The original Hardy Creek greenhouse grew herbs, flowers, lettuce and peppers, serving upwards of a dozen local restaurants. The decision was made to scale up and build a commercial aquaponics facility.

“I was hired on as greenhouse tech and salesperson,” Hinson says. He soon realized it was going to take way too many restaurants and a far too cumbersome delivery system to sell what a 45,000-square-foot greenhouse was capable of producing.

“So we got into the wholesale market selling lettuce, basil and chives to Harris Teeter supermarkets,” Hinson continues. “They were a great customer.”

But the profit margins were tight.

Hileman explains that seeding lettuce plants could be difficult. Then there was a philosophical problem. The seed was planted in pads of rock wool — volcanic rock that’s heated and spun like cotton candy.

Calkin points out another significant problem. 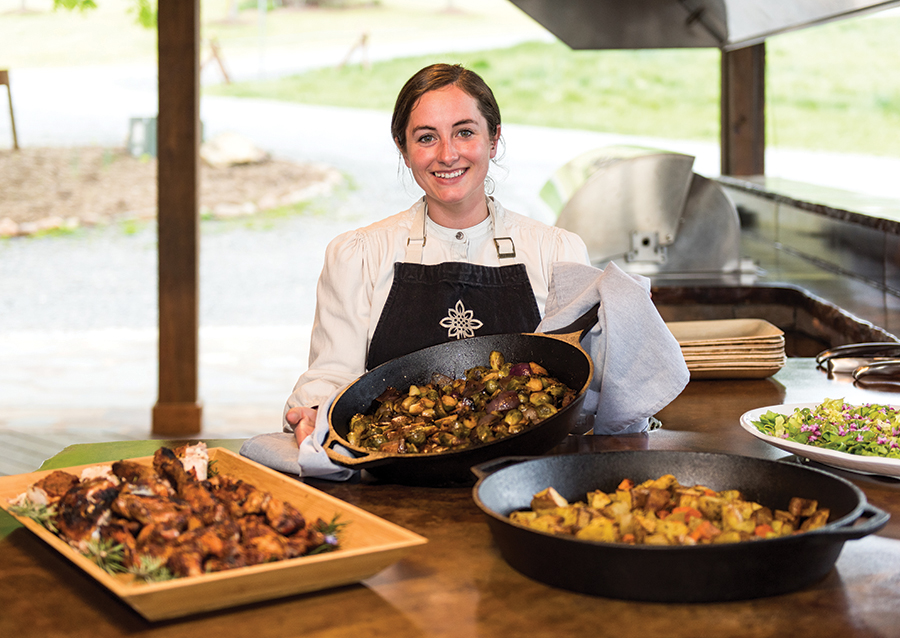 “It was a disaster,” Calkin says.

“Last week was our final delivery to Harris Teeter,” Hinson adds. “So we’re moving into our next phase with more biodiversity.”

When I’m finished at the greenhouse, Boisvert takes me by the Five Stand for some fun.

Taylor Estep, a Charlotte native who’s a shooting instructor, carpenter and metal fabricator at the farm, gives me a quick rundown on gun safety, then hands out protective glasses and ear plugs so the three of us can shoot clays. My youthful days hunting upland birds come back sufficiently for me to avoid humiliation.

Then I’m off to visit Suzanne Durkee. After graduating from the University of New Hampshire and receiving an M.B.A. from Simmons University in Boston, she focused on strategic planning and built a successful consulting business, which she sold. Then she spent 10 years as an executive at General Dynamics in Charlotte before retiring.

“After that I kicked around painting, traveling,” she continues. “I was having a great time.”

But fate intervened, in the form of Miss Judy.

The two women worked out at the same gym. They started talking.

“I loved what Miss Judy was doing, but I didn’t want to go back to work,” Durkee says. “So I told her I’d write her up a business plan.”

That was four years ago. Now Durkee is the CEO at Juneberry Ridge. 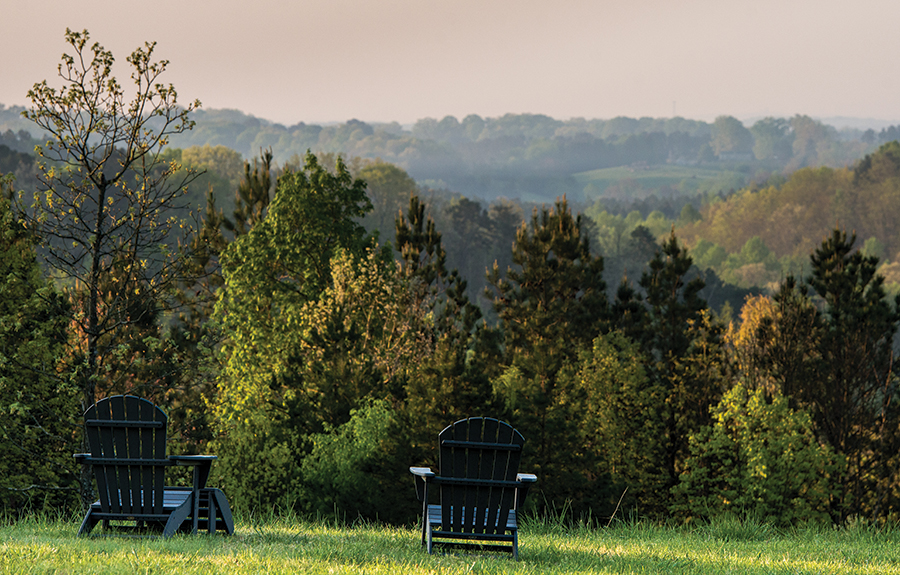 “We’d given ourselves 10 years to transition to regenerative agriculture,” she says. “We’d created a strategic road map with guideposts and benchmarks showing progress and profitability.”

Then the coronavirus hit, slowing the farm’s transition.

“We’ve had time to plan,” Durkee continues, “but not that much time to implement.”

She says even the huge corporate farms in the Midwest are realizing that continued tilling and massive use of fertilizers, herbicides and pesticides are methods that are not sustainable.

Highfalutin? Maybe. But she’s made me a true believer.

Count on Miss Judy to bring us down to Earth. 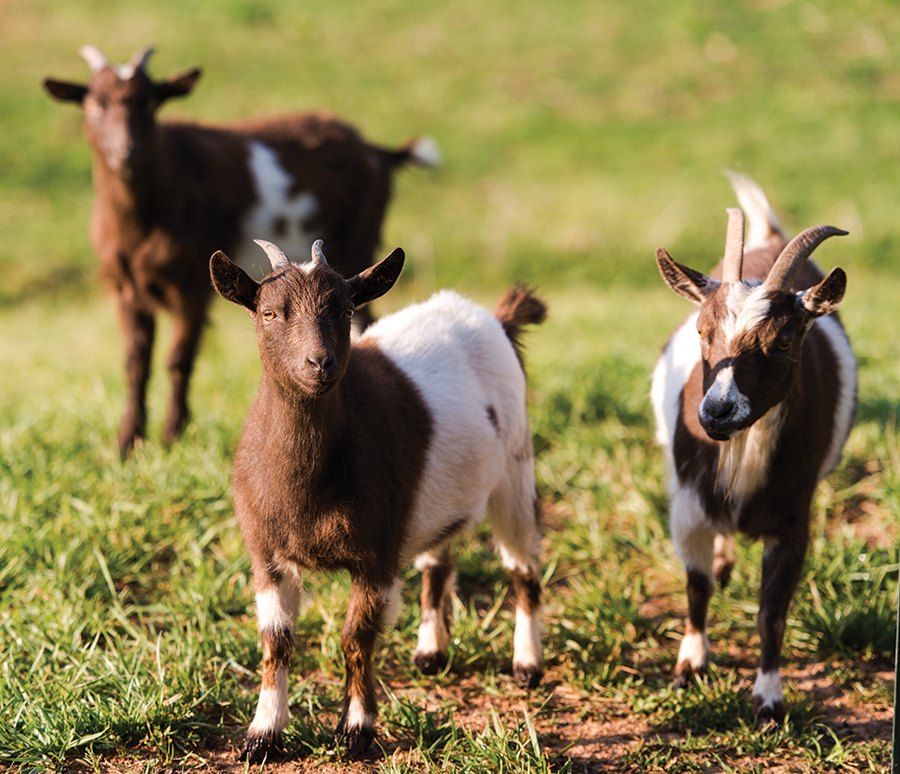 “You know, we didn’t start out to be a regenerative farm,” she says. “We morphed here. But our young farmers can make something out of nothing.”

Tour complete, my packed suitcase is in the car, but I’m reluctant to leave. I walk over to the vista behind Longleaf cottage, where chestnut, persimmon and Juneberry trees have been planted.

Scattered among the young trees are clumps of muhly grass, blueberry bushes and prickly pear cactus along with big stones grubbed up from the land.

I look in the distance at the native forest emerging beyond the recent plantings and imagine coming back to this spot someday to see the chestnut trees loaded with nut burrs and the Juneberry trees shading the bushes below.

Given my advanced years, I may not be around for that.

But from what I’ve seen and heard, I’m certain Juneberry Ridge will.  OH

Ross Howell Jr. is a freelance writer in Greensboro. Contact him at ross.howell1@gmail.com.