If you drove by René Zieg’s home, a cream-colored bungalow distinguished by a heavy brow of evergreen clematis over the front door, you’d never guess that it was a laboratory of sorts, a proving ground of products and ideas.

You can see them — as some 75,000 followers do — on her blog, Cottage and Vine (cottageandvine.net), a digital scroll of her musings about home, garden, food, clothing, travel and other expressions of self. 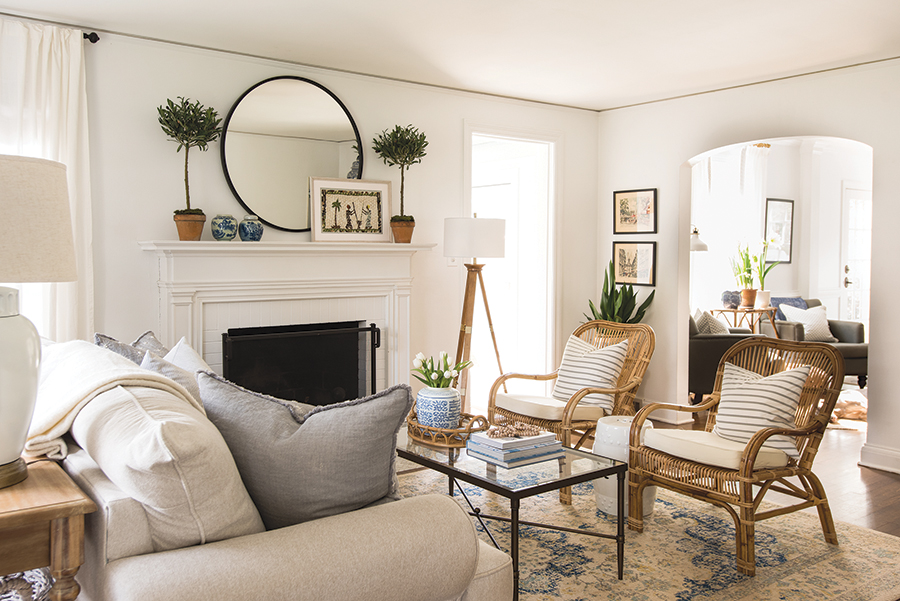 Her posts draw on her own home-improvement projects; seasonal design ditties; meals that she and her husband make (“Sometimes he’ll say, ‘This is blog-worthy,’ and we’ll take a picture.”); her experiences with freebies and invitation-only tours; family gatherings; and morsels vacuumed from websites, magazines and books.

Recently, when her older son, Tyler, was getting married on a February weekend visited by an ice storm (which happened after the ceremony was delayed so the bride could recover from COVID), Zieg pulled out the stops to make the rehearsal dinner memorable. She scripted signs, composed table decorations and assembled a slide show of snapshots. People were surprised when she didn’t cry at the wedding the next day. René explained that she’d spent all of her tears while going through family photos.

Such vulnerable glimpses, she says, are vital to her readers. 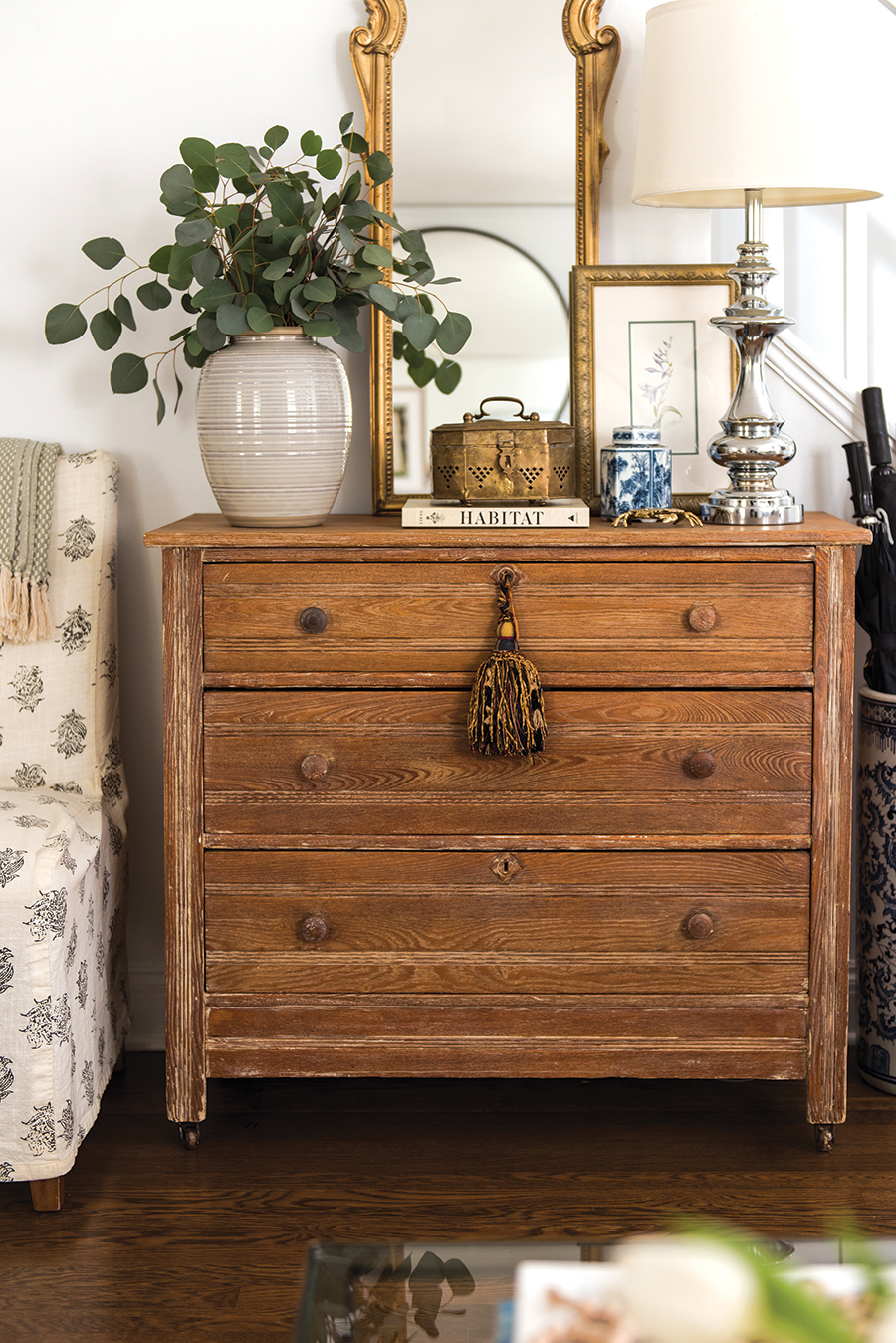 “I would like for people to know me a little bit. I read a lot of blogs, and I enjoy them more when I feel like I know the writer. I feel like they’re more relatable,” says Zieg, who grew up in Asheboro and earned a degree in fashion merchandising from UNCG.

She met husband-to-be Rick, a Maryland native who graduated from UNC Charlotte, through a high school friend. They settled in Greensboro in the early 1990s, nestling into a home in Lindley Park before transplanting to their current home in the old Starmount neighborhood in 1996.

René started blogging in the late aughts, when sons Tyler, now 25, and Parker, 22, were in elementary and middle school. “Back when we still got a newspaper, Rick was reading about blogs,” she recalls. “He said, ‘You really should start a blog as a creative outlet.’” René let the idea simmer for a couple of years before launching her site in 2009. “It started out as family things — parenting strategies, things the kids were doing, family management,” she says. As the boys grew, René, by then a full-time mom, focused on writing about the thoughtful curation of home and garden. “Once they get older, you know, you kinda get back to your roots,” she says.

René leaned on design experience from former jobs, one as a merchandiser in the men’s and boy’s divisions of Girbaud, then a

brand that belonged to Greensboro-based clothing giant VF Corp. “We’d take designs from French designers and adapt them to the American market, with colors and buttons and trims,” she says.

Her last full-time gig was with the Klopman Mills division of Burlington Industries, where she devised mood boards to show potential customers how synthetic fabrics could be used in apparel.

On her way to work one day at the Burlington Industries headquarters — a mid-century “exoskeleton” building that was leveled to make room for the expansion of Friendly Center — she first saw the Starmount home that would be hers.

Like most people who fall in love with a house for sale, she and Rick were blind to the flaws. “It was like, ‘Oh, it’s fine. We can move in!’” René says, laughing. “Then all of a sudden, it was like, ‘Well, we really need to do this.’” 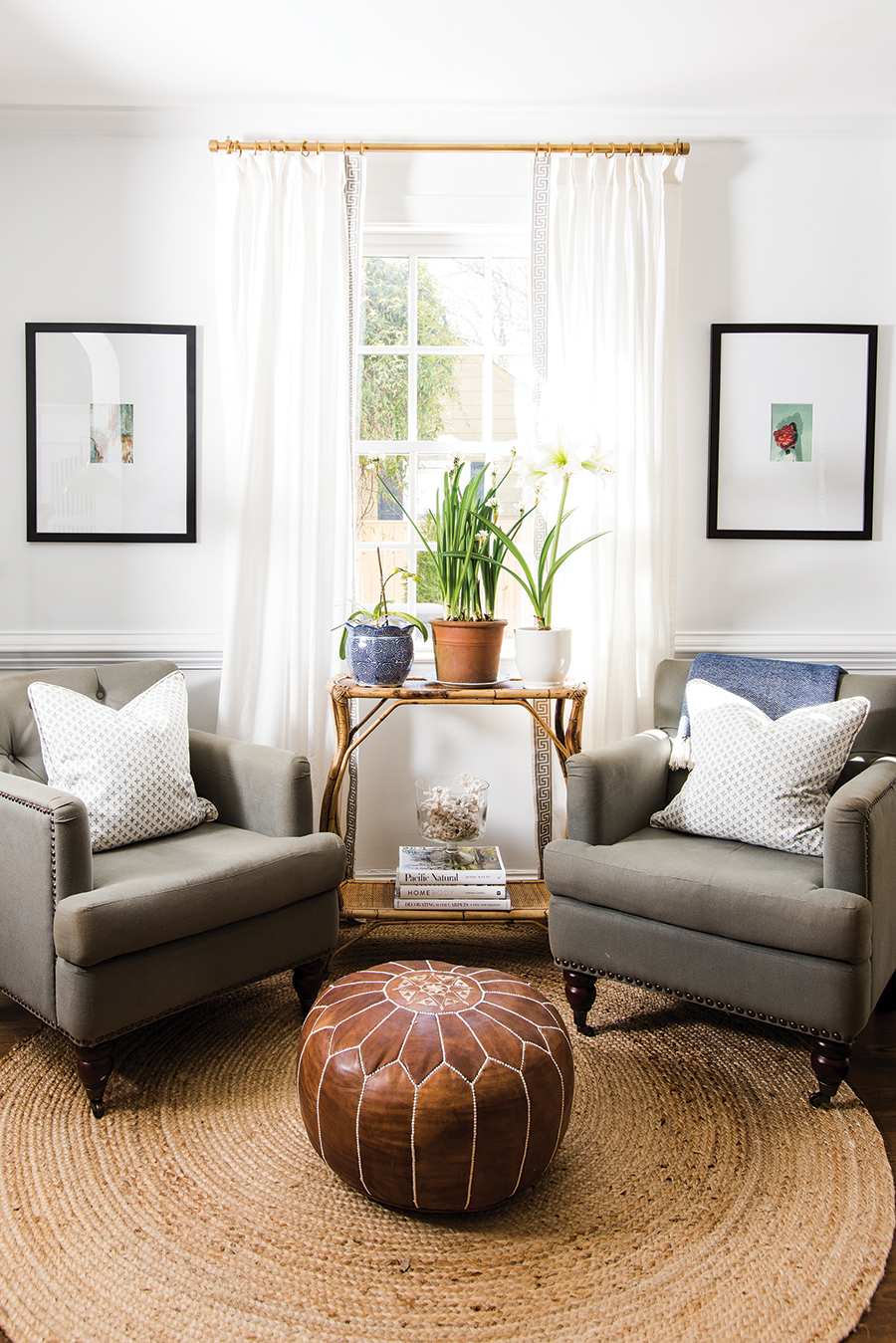 Some fixes — like ripping up the mauve carpet that crawled up the pine stairs leading to the second story of the 1938 home — were easy and cheap. Other improvements took more design and budget planning.

In 2003, the Zieg family (pronounced ZIG, as in zigzag) undertook a major renovation. They bumped out the back of the house, adding about 200 square feet to the dining room and another 200 square feet to what had been a galley kitchen. The construction lent itself to good stories — later. “We had two toddlers, and we were washing dishes in the bathroom,” René says. “When we pulled up the flooring, you could see dirt in the crawl space under the kitchen floor,” chuckles Rick. 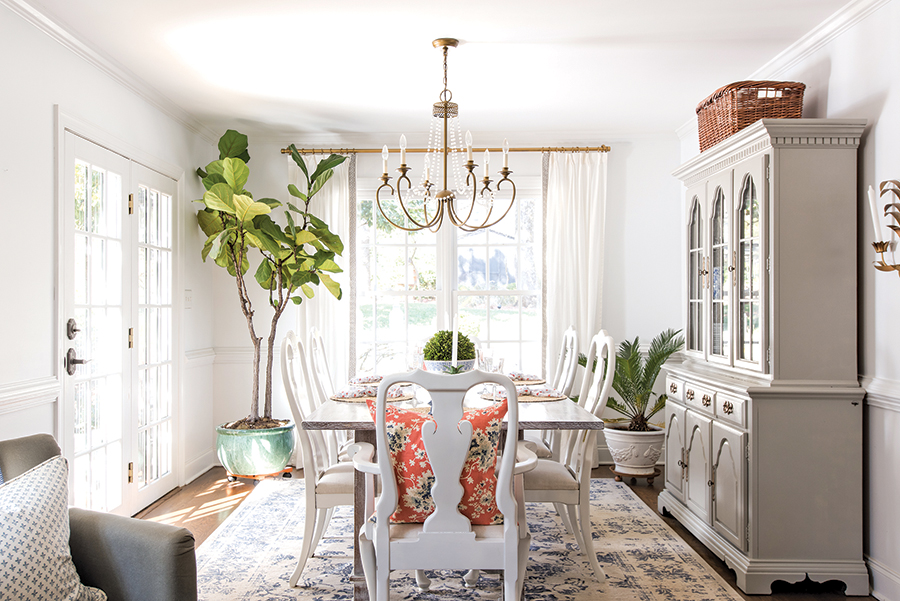 The improvements were pre-blog, but subsequent renovations and tweaks have been a mainstay of Cottage and Vine. There is no shortage of subjects. “When you live in an older home, it’s like the Golden Gate Bridge,” René says. “You finish working on one thing and move on to another.”

“I like having something going on at the house,” adds Rick, a sales director whose company makes liners for shipping containers. “Fixing something, painting something or landscaping in the backyard is fun.”

René’s likes and reflections snare oceans of eyeballs. Fohr, a company that verifies the reach of social media influencers, puts her audience at almost 75,000 between all of her platforms. 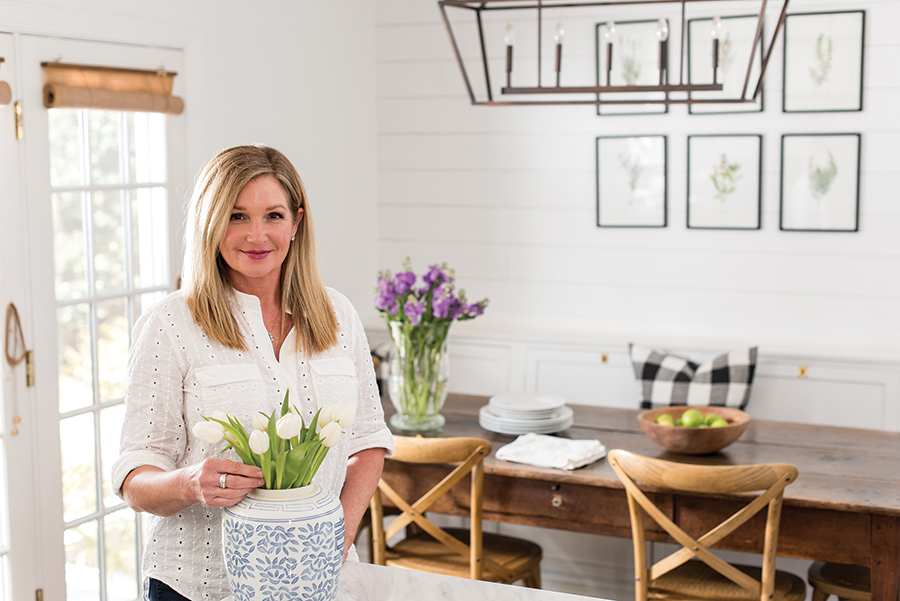 There’s likely some overlap among followers, but René’s numbers still are robust enough to generate a healthy stream of income thanks to dozens of advertisers, including Crate & Barrel, Lexus and Nordstrom. She works with a national agency, AdThrive, that places advertisements on her blog. She also uses rewardStyle, a monetization program. When readers click on her links and tags, and buy the attached items, René gets a commission.

Often, companies pitch products to her, hoping she’ll post a picture and write-up. Walmart, for example, dangled a fee for her to write about their on-line clothing store. So last fall, René bought some jeans, sweaters, boots, dresses and a faux-Sherpa coat, then posted pictures of herself modeling in her home and at locations around Greensboro. She stresses that she only promotes products that appeal to her tastes.

“I’ve turned down more than I’ve accepted,” she says. 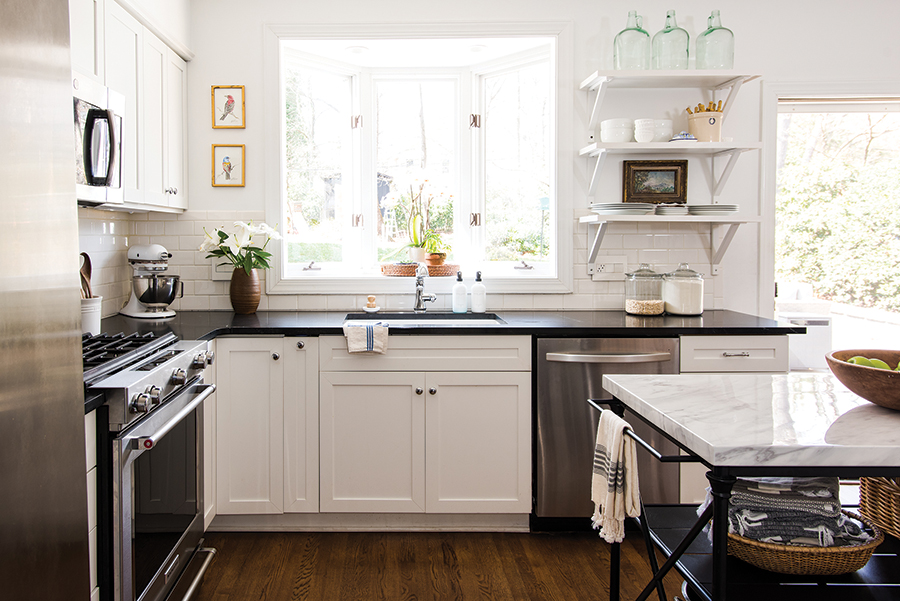 “It’s been people coming to her, not her going to them, which is a high compliment to her,” adds Rick.

The perks of the job can be surprising. Sound Sleep Products, a gel-foam mattress company, sent René a queen size sample compressed into a small box. “We opened it in the dining room, and it sort of exploded,” René says, laughing. “We had to finagle it back to the bedroom. We’re still sleeping on it.”

Even the family’s Weimaraner, Reagan, fits the decor with her soft gray coat. 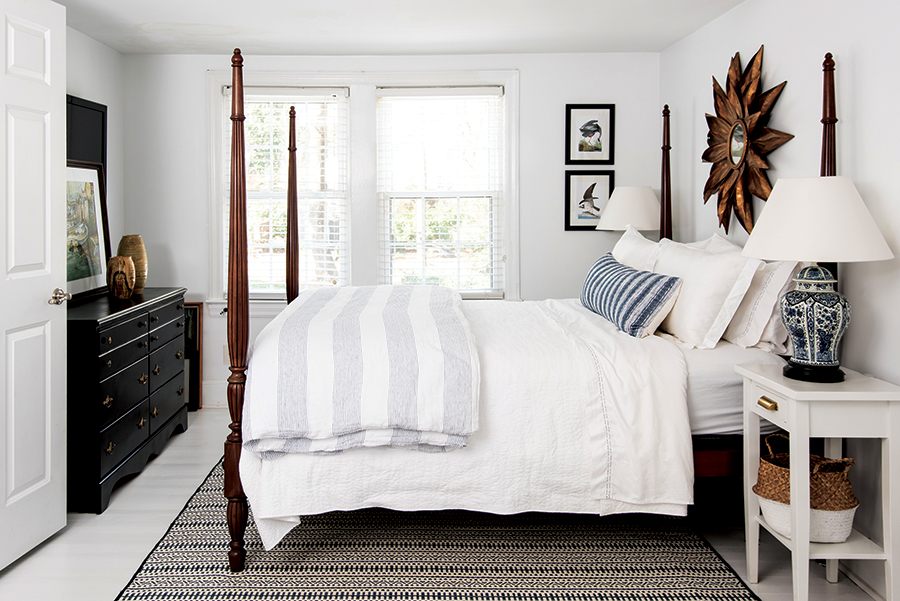 Sometimes, René solicits feedback on interior changes. Last fall, when she trotted out a new kitchen island/prep table made of metal and marble, she pondered what kind of rug should go underneath. “I’m torn between a simple sisal rug or a vintage rug with muted color. What do you think?” She asked. Readers voted for vintage.

In 2010, when she painted the upstairs hardwood floors — a way to brighten the former attic while avoiding the cost and disruption of refinishing floors — readers lauded her courage. “It takes a brave woman to paint the floor white, so kudos to you! Love it, it looks stunning!” exclaimed a reader known as The Hip Hostess.

Followers also endorsed a major project that the Ziegs finished last fall: the construction of a patio that spans the back of the house. Greensboro landscape designer Marguerite Suggs drew plans for hardscape and surrounding plants, some of which were transplanted (boxwoods and limelight hydrangeas) and some of which were bought new (autumn ferns and an oh-so-upright hornbeam tree). Pruning Perfection & Landscape, a local company, laid the patio pavers. They also installed lighting below trees, along walkways and under the ledge of the patio’s knee wall. Buffalo Fence erected sections of privacy fence, dressing up the posts with pyramidal copper caps. The overhaul preserved René’s herb garden, which is outlined by rocks from family homes in Vermont, and West Jefferson, North Carolina. 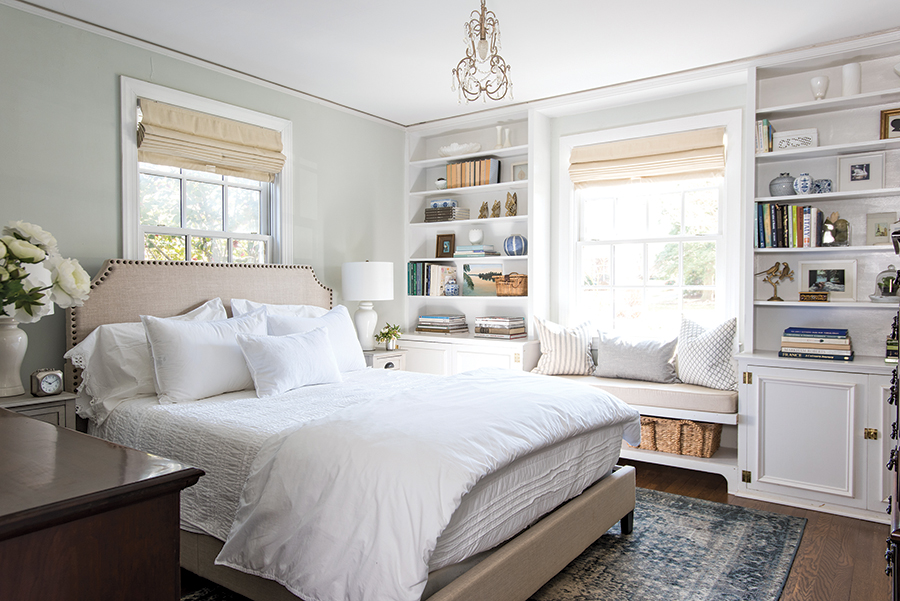 René inherited her green thumb — a kitchen orchid supports 19 white blossoms — from both parents. Her mother, Rita Hunter of Asheboro, specializes in gardening to attract monarch butterflies. Her late father, Norman Hennessee, raised vegetables. René relishes the memory of sitting down with him to watch Crockett’s Victory Garden on PBS.

Norman, who was an avid woodworker, also whispers his presence inside René’s home. The family prizes his Queen Anne and Chippendale reproductions. Another heirloom is the kitchen table that René’s maternal great-great-grandfather fashioned from thick pine planks in the 1800s. Generations have sat around the table, spilling their lives, literally and figuratively, across the love-worn boards.

The Ziegs have added their own chapters to those stories. Years ago, they hired carpenter Doug Mack to build a banquette down the long side of the table. René looks at the nautical-style bench, deep with concealed storage, and sees her sons, exhausted from swim practice and full of a late dinner, lying down and falling asleep on the broad seat.

Soon to be empty nesters, René and Rick plan on staying put. They’re fond of their neighbors and of the neighborhood’s proximity to downtown Greensboro and their favorite haunts at the Four Corners crossroad in Lindley Park. Plus, René is itching to entertain on the new patio and write about it.

And there are more projects on the horizon. Like refreshing the downstairs bathroom. Moving the laundry room from the basement to the first floor. Organizing the basement into a proper storage space. There is no end in sight, which is a bonus for René and her readers.

“It’s an evolution,” says René. “Our needs change, and our house changes with that.”  OH

Maria Johnson is a contributing editor of O.Henry. Contact her at ohenrymaria@gmail.com.