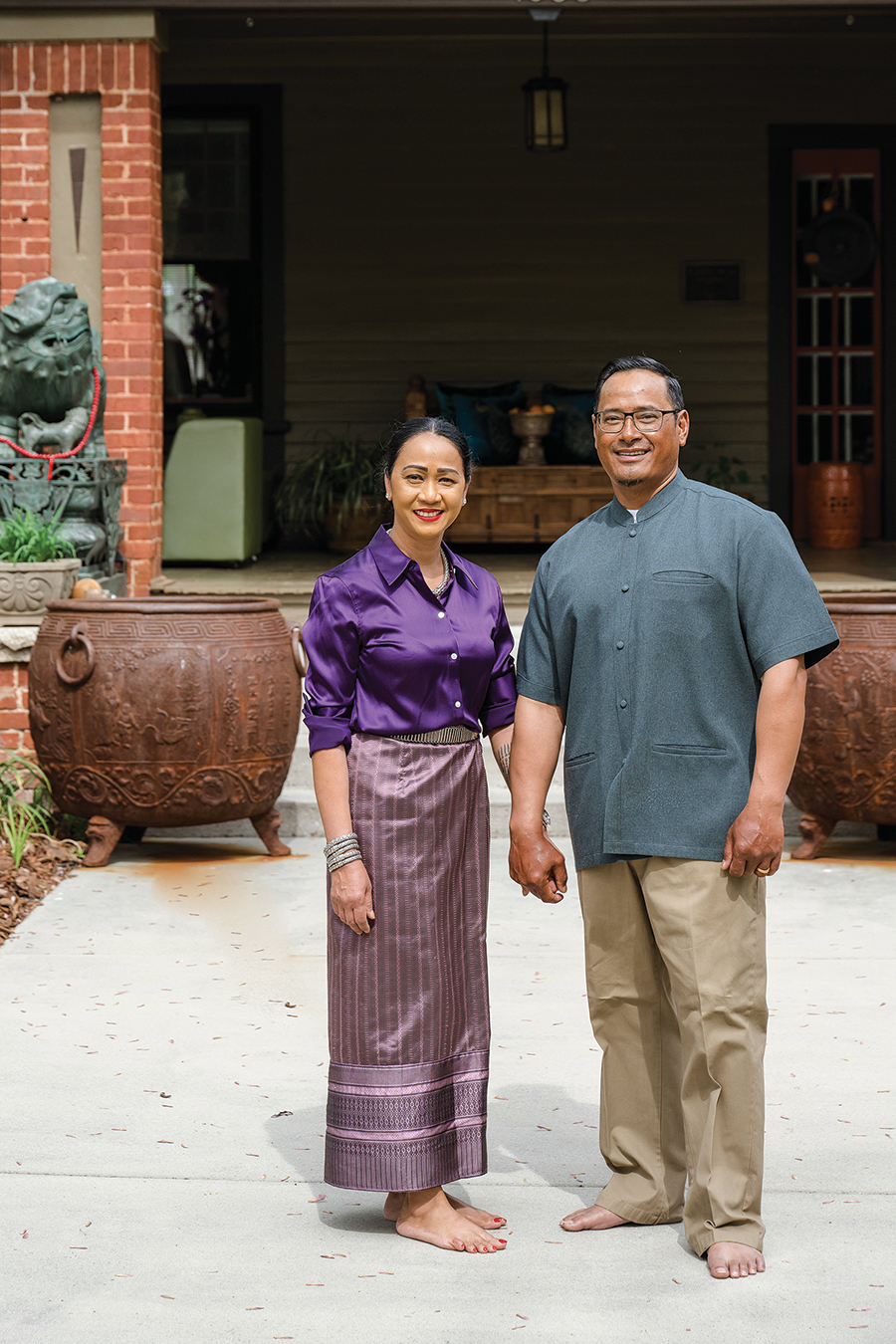 The real estate listing popped up on Tu Sen’s Facebook page around midnight.

She went running to find her husband, Todd, who was minding a backyard fire pit with the couple’s daughter Tiffany Vanhpraseuth and godson Christian Thomas.

The family had just gotten home from working at their restaurant, 98 Asian Bistro in High Point.

A century later, whenever Tu and Todd passed the house at the corner of Johnson Street and East Farriss Avenue, Tu would ask Todd to put on the car’s emergency flashers and stop at the curb so she could get out, jab a couple of incense sticks in the corner of the yard, light them and pray to the house, asking permission to live there and take care of the structure some day.

Todd knew that Tu loved the house because it looked Asian, with its simple horizontal lines and deep front porch.

He knew, too, that she thought it would be a good home for the many Buddha statues that she kept in her prayer room, a shrine she created inside a storage shed at their suburban High Point home.

But even in the face of Tu’s excitement about the historic property, Todd was overcome by worries about money — and by an unspoken feeling that people like him and Tu, who came to this country as child refugees from war-torn Southeast Asia in the 1970s, shouldn’t, and couldn’t, live in a big house like that.

“We can’t afford it,” he told her that night. Undaunted, Tu made an appointment to see the house the next morning. After the showing, she called Todd. “We have to make an offer,” she said.

The house was charming and sophisticated, she reported. It was full of modern furniture and — although the owners weren’t Buddhists — it contained several Buddhas already. “I said, ‘No wonder I liked it,’” she recalls.

Todd knew how determined his wife could be when she wanted something. Usually, he was happy with the outcome. “OK,” he said. “Do it.”

They made an offer. 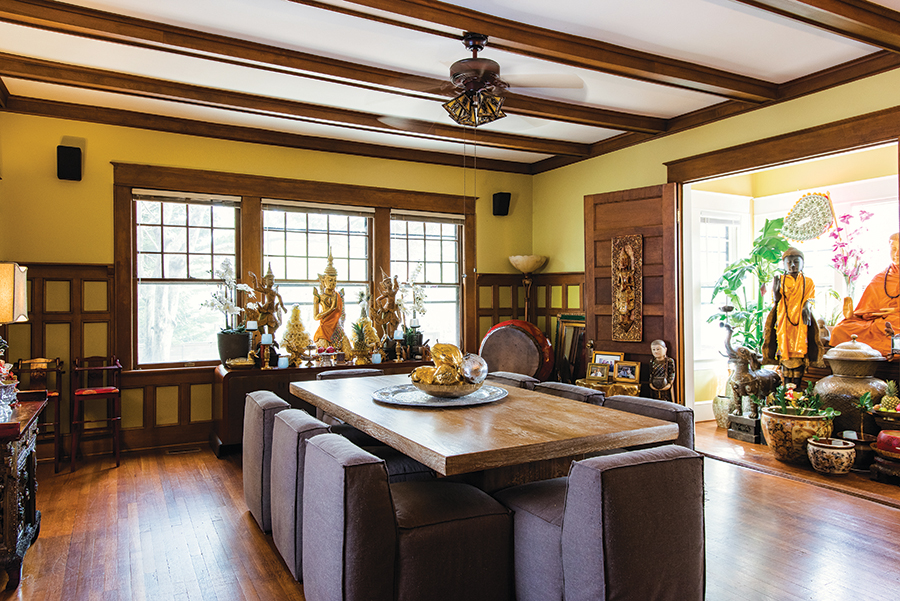 A few days later, Tu toured the house again. This time, she took fresh fruit as an offering, spread it on a white sheet in the foyer, lit 10 white candles and had a chat with the house.

“I said, ‘I’m here. You already know me. If you want me to be your next caretaker, choose me. If you feel I’m not the right person, I will accept it.’” Two weeks later, the agent called. The owners had taken their offer.

The Sens moved into their new-old home in November 2019.

Sitting in the front room, on a plush beige sofa that matches the couple’s blond Yorkshire terriers, Bang and Blue, Tu explains why she believes the former owners accepted their offer.

“I’ve been with my wife 29 years and let me tell you,” he says, “I’ve seen miracles around her when she prays.”

Tu nods, adding that she prays for many things: family, friends, her hometown.

By hometown, she means High Point, not the U.S. military base in Laos where she was born 48 years ago. A lot has happened between then and now. “I pray for healing,” Tu says. “For what I went through.” 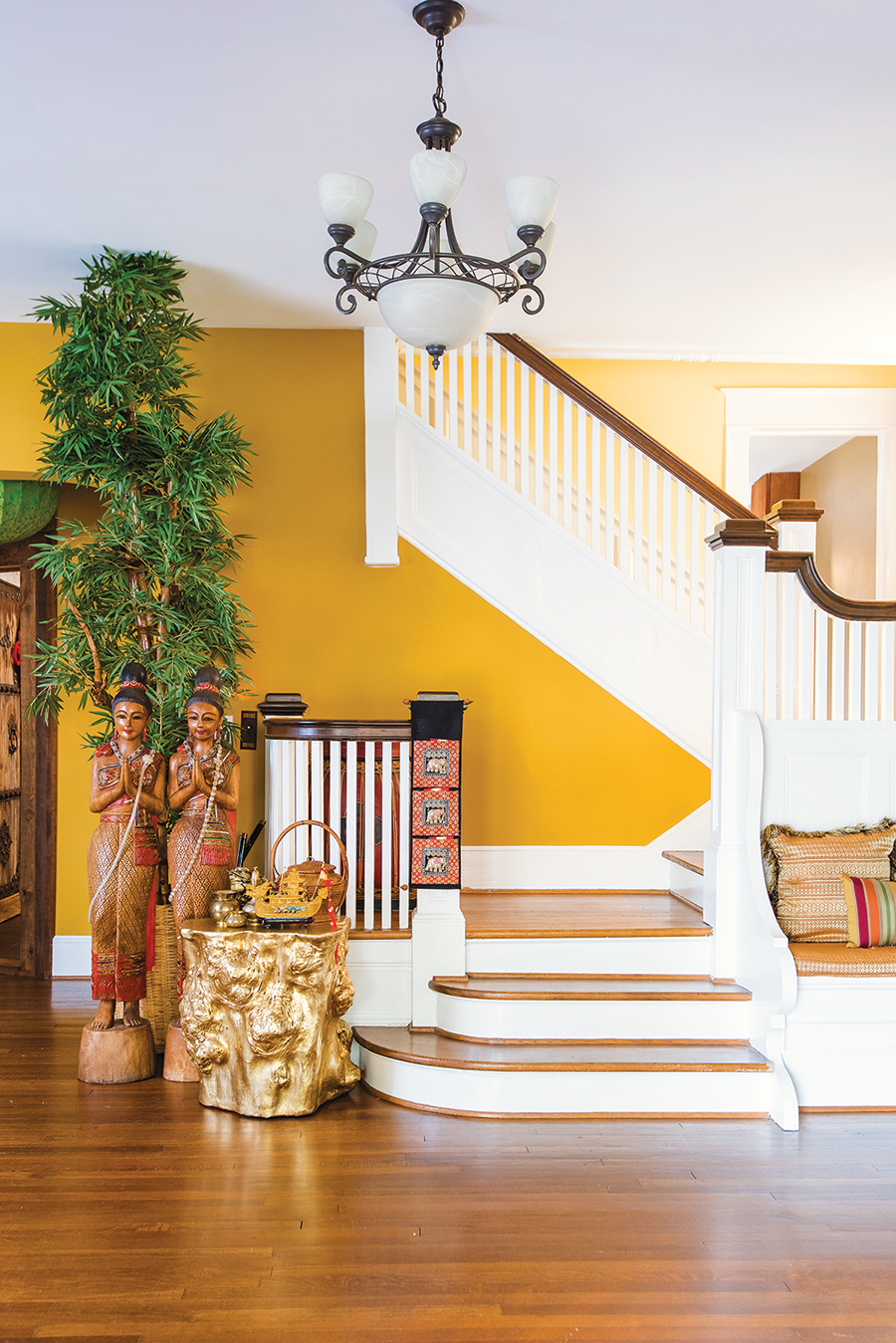 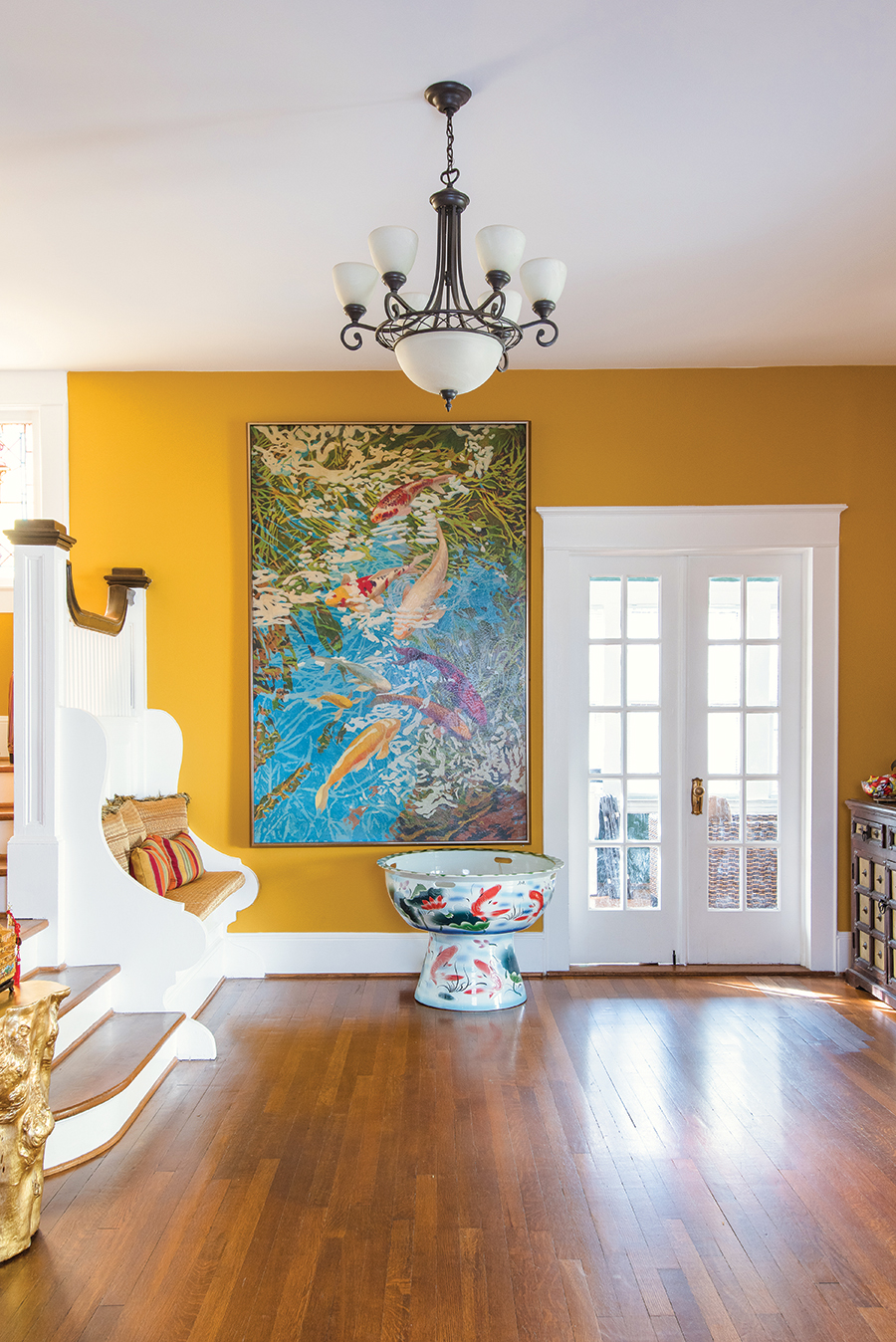 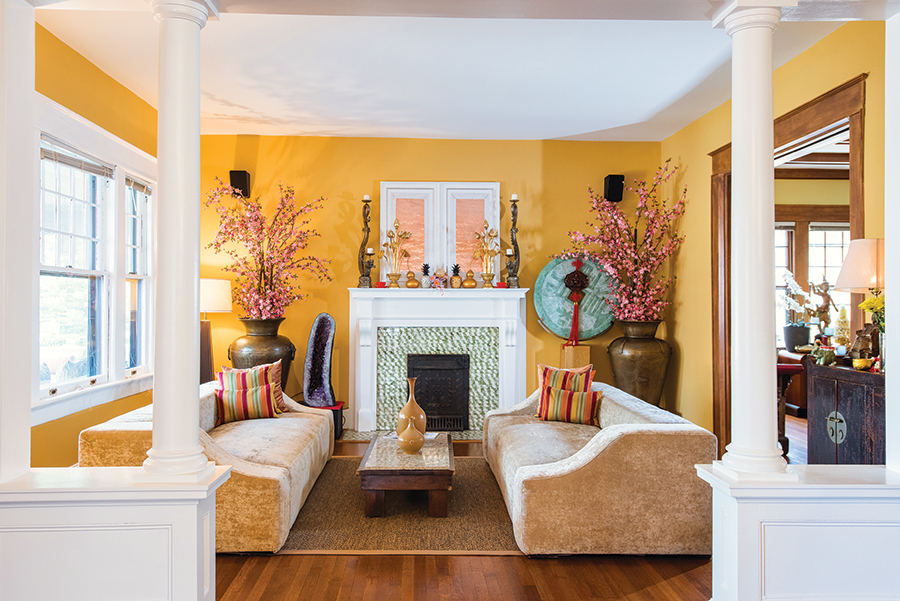 She remembers the sound of helicopter rotors slapping the air. Then a toddler, Tu was strapped to her mother’s chest with a bed sheet. Her mother had one foot in a Black Hawk helicopter and was telling Tu’s father to come on. Because Tu’s father had worked for the U.S. Central Intelligence Agency in Laos during the Vietnam war, the Americans offered to evacuate the family as Vietnam and neighboring Laos fell to Communist forces. If you stay, they will kill you, her mother told her father.

I’ll be fine, he said. Tu’s mother stepped out of the helicopter. Laotian officials arrested her father and threw him in jail, where he was chained in a dark basement. Tu, her mother and two sisters lived nearby. Her mother cooked and kept house for her husband’s captors. Gradually, they trusted her enough to release her husband. But he wasn’t the same when he got home.“He was broken,” says Tu.

Her mother, who was Thai, decided the family should risk an escape to Thailand. One night, when Tu was about 8, her family and a few others boarded canoes to paddle across the Mekong River to Thailand. Rain lashed the canoes. Thunder rattled their already raw nerves. Lightning strobed, exposing their location to Thai soldiers, who shot at them. “My mom told all of us to lie down,” Tu says. They made it.

A couple of days later, Thai police picked up the group, soaked and traveling on foot. Eventually they were taken to a refugee camp. The family stayed in camps for about four years. Tu remembers room dividers made of newspaper and bamboo. She remembers getting one fish, one bowl of rice and a five-gallon bucket of water every day. She remembers Thai vendors selling apples outside a barbed wire fence.

“I wished I could taste that apple,” she says.

Once her family was cleared for green cards because of her father’s service to the U.S., camp officials asked her mother where they wanted to go. Her mother pointed to a post card of the Statue of Liberty in New York Harbor.

“She said it was the land of gold,” Tu says. “My father said the Americans would never leave us. He believed that.”

The family lived in Jersey City, N.J., for several years, then followed their middle daughter, Mary, to Greensboro.

Tu’s parents worked in a mattress factory in Asheboro. Mary worked at a sock factory and grocery store in Greensboro. Tu waited tables in a Chinese restaurant, Empress Garden, in Greensboro.

“I did so well I had people waiting to sit in my section,” she says. “All my customers were elderly. They tipped me really well. They knew I was a single mom.”

Years later, when Mary and her husband, James, opened Thai Chiang Mai, a restaurant in High Point, Tu and her second husband, Todd, joined them in the family business.

Born in Cambodia, Todd also had lived in a Thai refugee camp — though not the same one as Tu — before his family immigrated to South Bend, Indiana. One spring weekend Todd came to a friend’s wedding in Lexington, N.C. 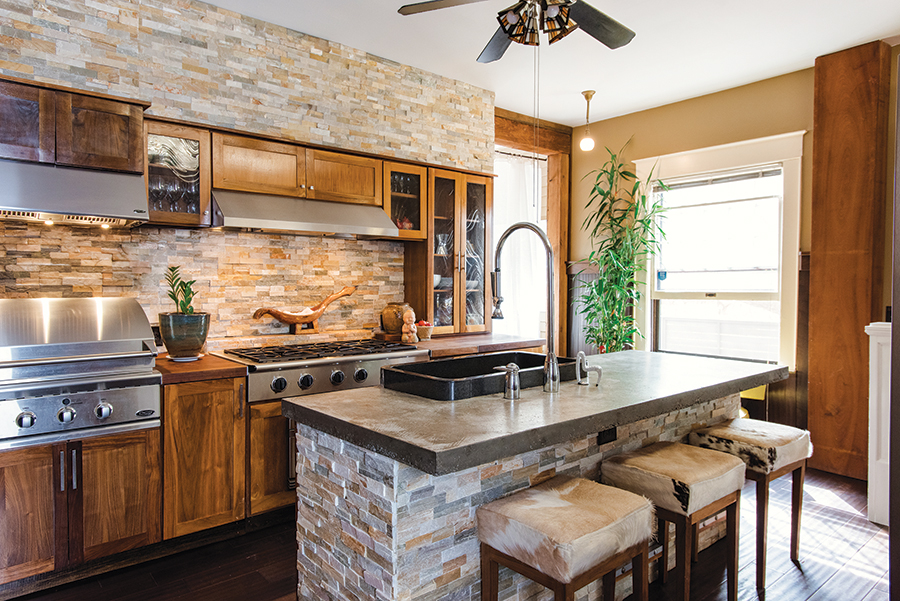 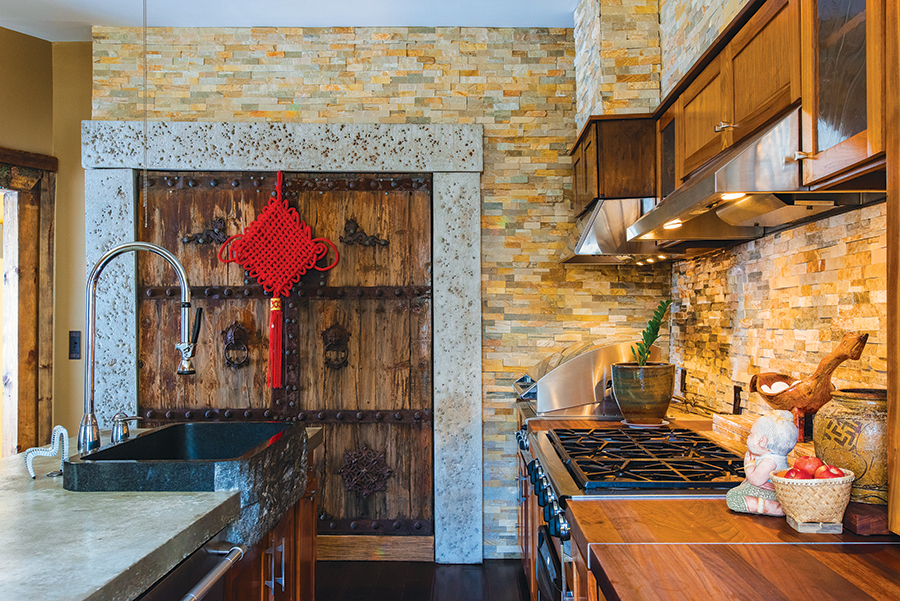 His parents saw photos of him wearing shorts in North Carolina while they still wore coats in Indiana.

They saw the red clay soil, which promised a longer growing season for their garden.

They were sold on the South. The family relocated to the Piedmont, worked in furniture factories, and planted a huge garden.

“I think my mom has never bought a vegetable,” Todd jokes. “For the older generation, they grow stuff to connect them to the old country. Myself, I go fishing because that’s what I did when I was younger, in Cambodia, for food.”

His fish-grilling skills came in handy when he and Tu opened their own place, 98 Asian Bistro, in 2015. The upscale restaurant, which occupies part of a former Chevrolet dealership on Main Street in High Point, memorializes the year Tu’s father died, 1998.

Tu and Todd insist on honoring those who have paved the way for them. 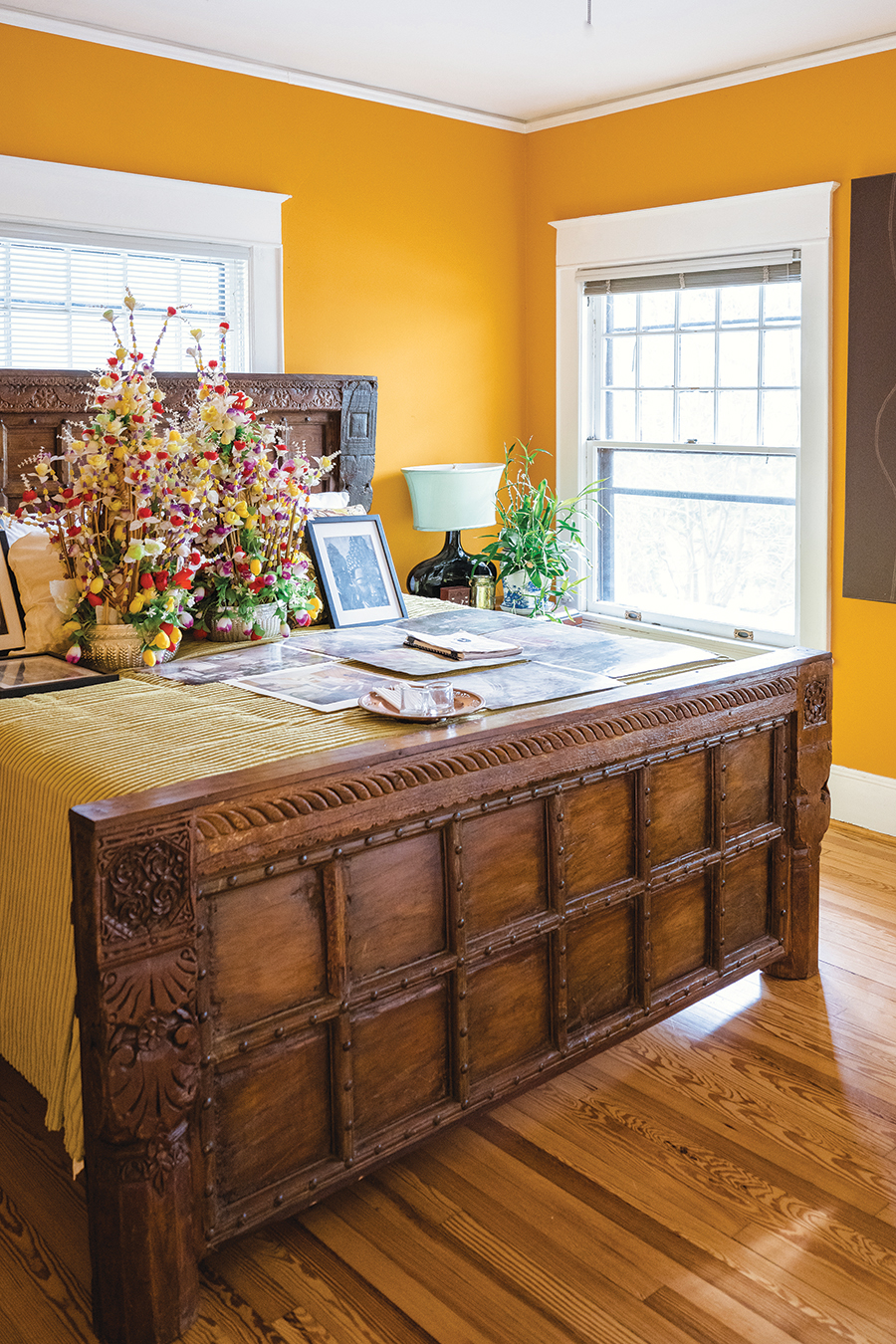 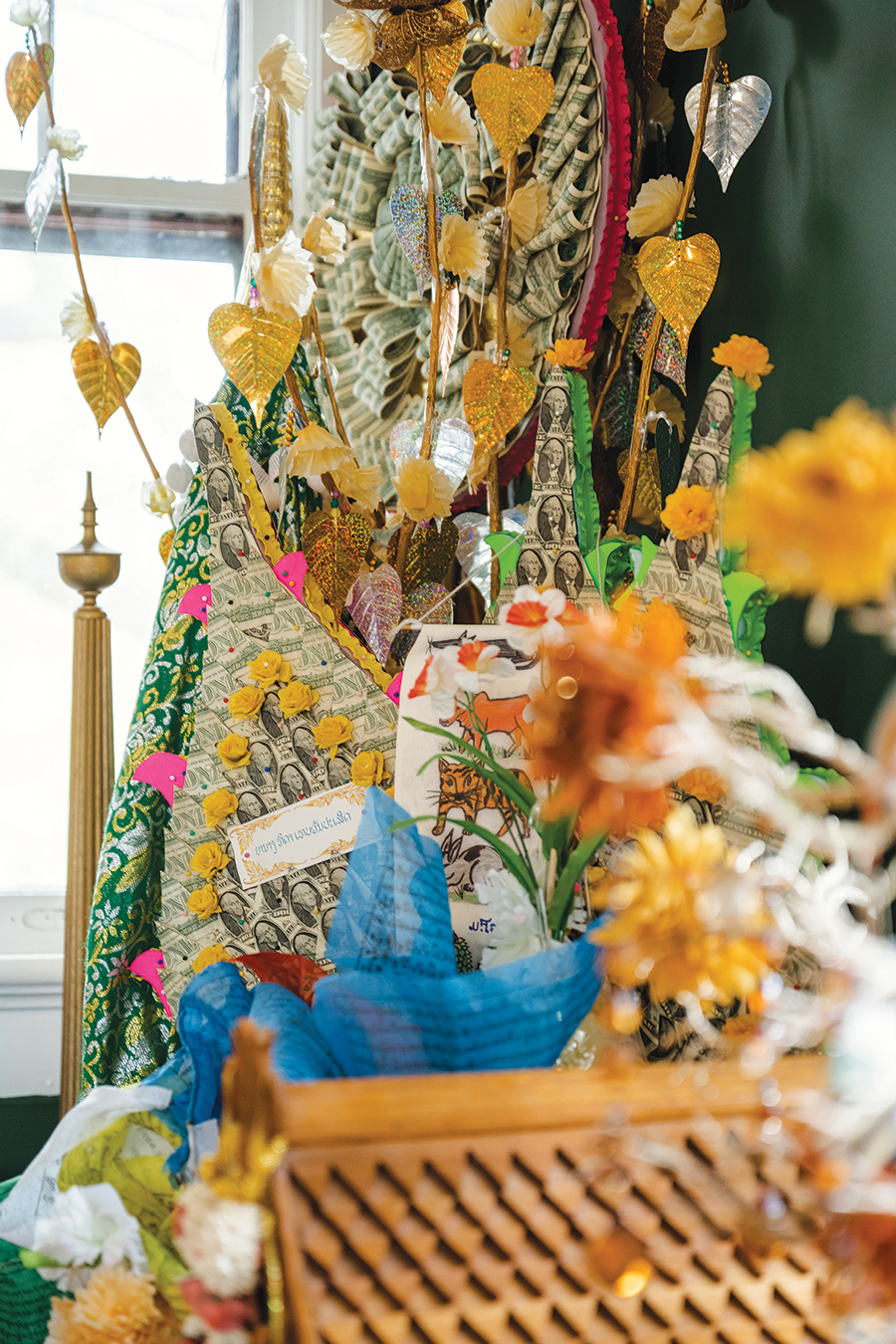 In their home, they have set aside the master bedroom to venerate the home’s second owner, physician H.W. McCain, whose family lived there more than 40 years. No one sleeps in the king-size bed, which is strewn with photos and write-ups about the home.

Another bedroom is Tu’s prayer room, which twinkles with banks of metallic figures representing both sides of her family: Buddhist and Thai cultures for her mother; Hindu and Indian cultures for her father. Fresh flowers, fruit, candy, bottled water and sweet drinks welcome the spirits. Incense perfumes the air.

A third bedroom serves as a closet for Tu and Todd.

The couple sleep in a modest fourth bedroom. It’s the only room that they have furnished themselves. 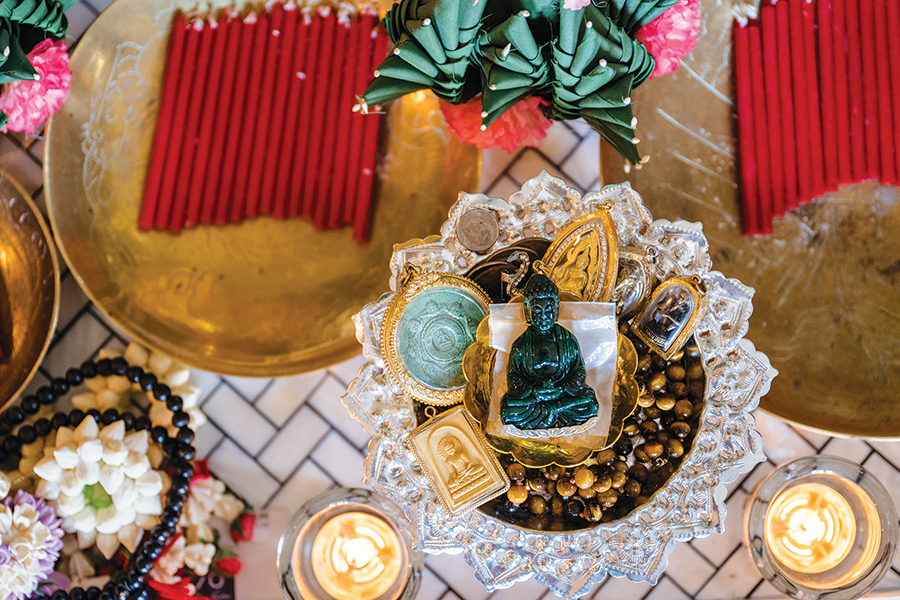 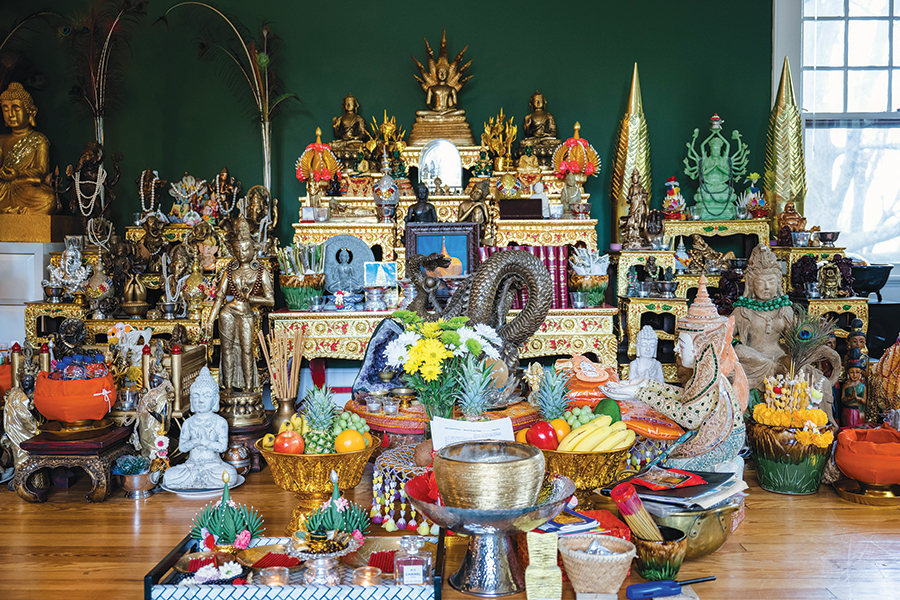 The home’s former owners, Michael and Patricia Bellocchio, who own a furniture manufacturing company, left behind many sleek pieces — the armless sofas in the front room, the minimalist dining room table and chairs — as well as carved Spanish Mission-style chests, sideboards and armoires that harmonize with Eastern flavors.

A pair of decorative wooden doors — supposedly from an Asian temple — are set into the wall of a professional kitchen that sports a six-burner gas stove, a concrete-and-mahogany topped island, an extra-wide refrigerator and freezer, a double oven and walls textured with stacked quartz stone.

Other than painting the home’s interior walls gold and green, the Sens have done very little updating. They’ve filled in the gaps between furnishings with a bevy of treasures, many of which have been given to them or sold at a discount by friends in the furniture industry.

The faux pink cherry blossoms that fill giant metal vases on either side of the fireplace? A customer ordered them for her daughter’s wedding and gave them to Tu afterward.

The bronze Chinese lions in front of the house? Tu saw them in a High Point store more than 10 years ago. “I said, ‘If you stay here, I’ll come back for you,’” she says. When she returned, the big cats were waiting at a fraction of the original price. She took them home and draped them with red strings of Buddhist prayer beads.

The burbling orb fountain with water slipping down the sides? A gift from the owners of the Phillips Collection, who are Tu’s customers.

The house-warming gift that she wanted the most — an American flag — came from the High Point Chamber of Commerce, which named her Businesswoman of the Year in 2016.

“Every once in a while somebody will stop their car in front of this house, get out and take a picture.”  OH

The Pleasures of Life Dept.Department, May 2022