Warning: "continue" targeting switch is equivalent to "break". Did you mean to use "continue 2"? in /var/www/wp-content/themes/jupiter/framework/includes/minify/src/Minifier.php on line 227
 Home, Naturally  – O.Henry Magazine

Lightness of being and a sense of gratitude 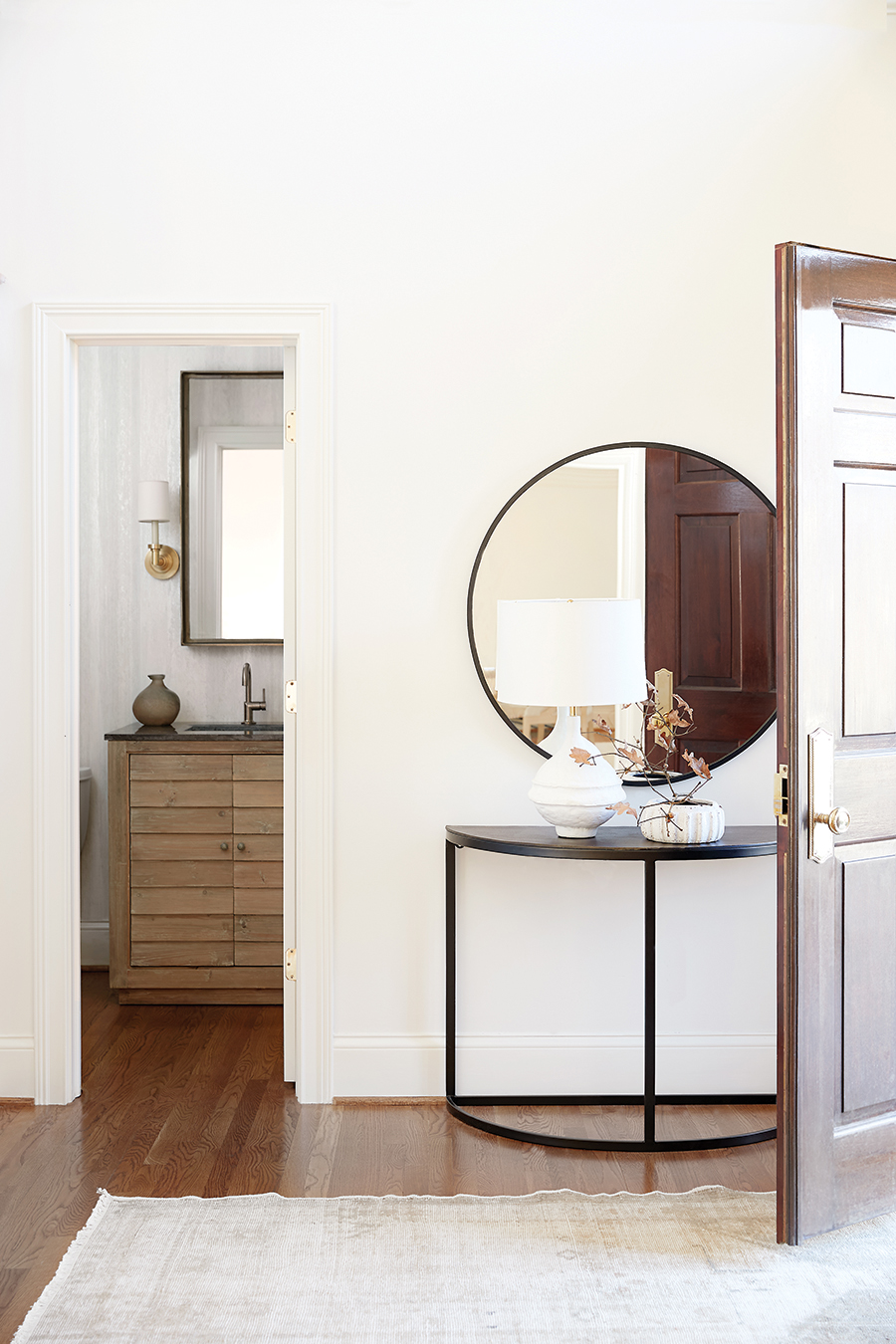 When an apparel executive and his artistic wife first weighed a career move from the Chicago area to Greensboro early in 2019, they made several exploratory trips.

JD and Erinn, who wish to go by first names, optimistically considered Greensboro a fresh slate. Even so, they weighed the unknowns: What would small town life and a new community be like? How would their three children adapt?

As for their eventual home, easygoing Erinn especially welcomed a brand-new lifestyle in a warmer, less hectic locale. Within months, they had sold their Wheaton home, a charming white two-story on a golf course, and were searching for their new home from afar.

JD became the new president at an apparel company. He could still golf, and would be much closer to his Lowcountry roots in Charleston, S.C.

“Honestly, I didn’t know what to imagine about Greensboro — and I didn’t want to have any preconceived ideas of what it would be like,” says Erinn, who studied dance and formerly worked in theater.

Erinn has a fondness for relaxed interiors without too much fuss or saturated color. She studied designers online and identified one who completely captured the family’s style. 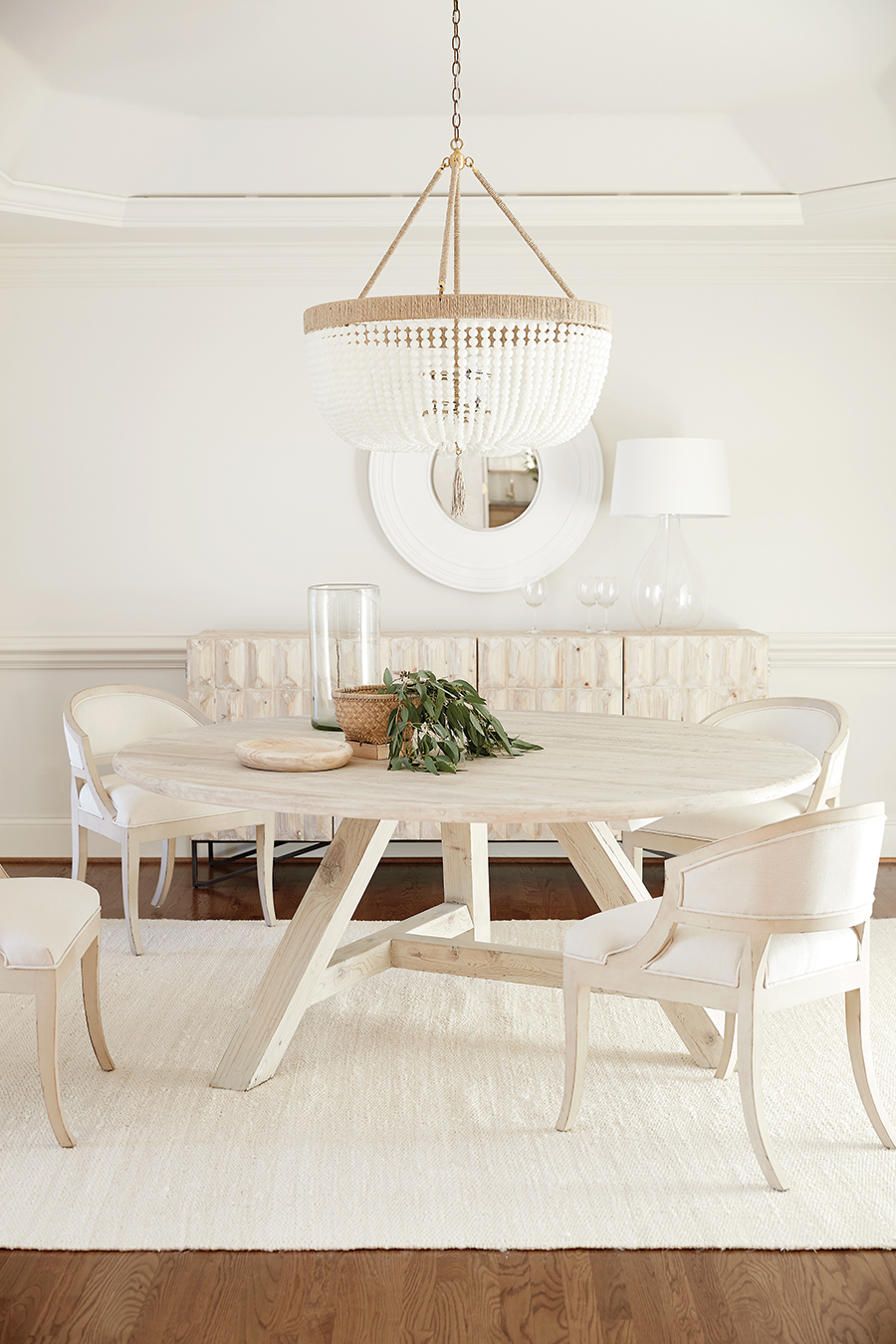 That designer was Lisa Sherry.

The couple tracked down Sherry via Houzz and Instagram — even before they found “the” house. Formerly based in High Point, Sherry still worked in the Triad from her Charlotte offices.

Choosing the interior look for their future home was the easy part, given that Erinn was already sold on Sherry’s serenely organic style.

Favoring jeans and sandals, Erinn was unable to imagine living with a formal, traditional home or being surrounded by splashy colors. She wanted as much of a relaxed sensibility as possible.

“I appreciate color in other people’s homes. But natural color is pleasing to my eye.” While checking out Sherry from afar, she kept hitting pause to study the images. “I loved her style.” 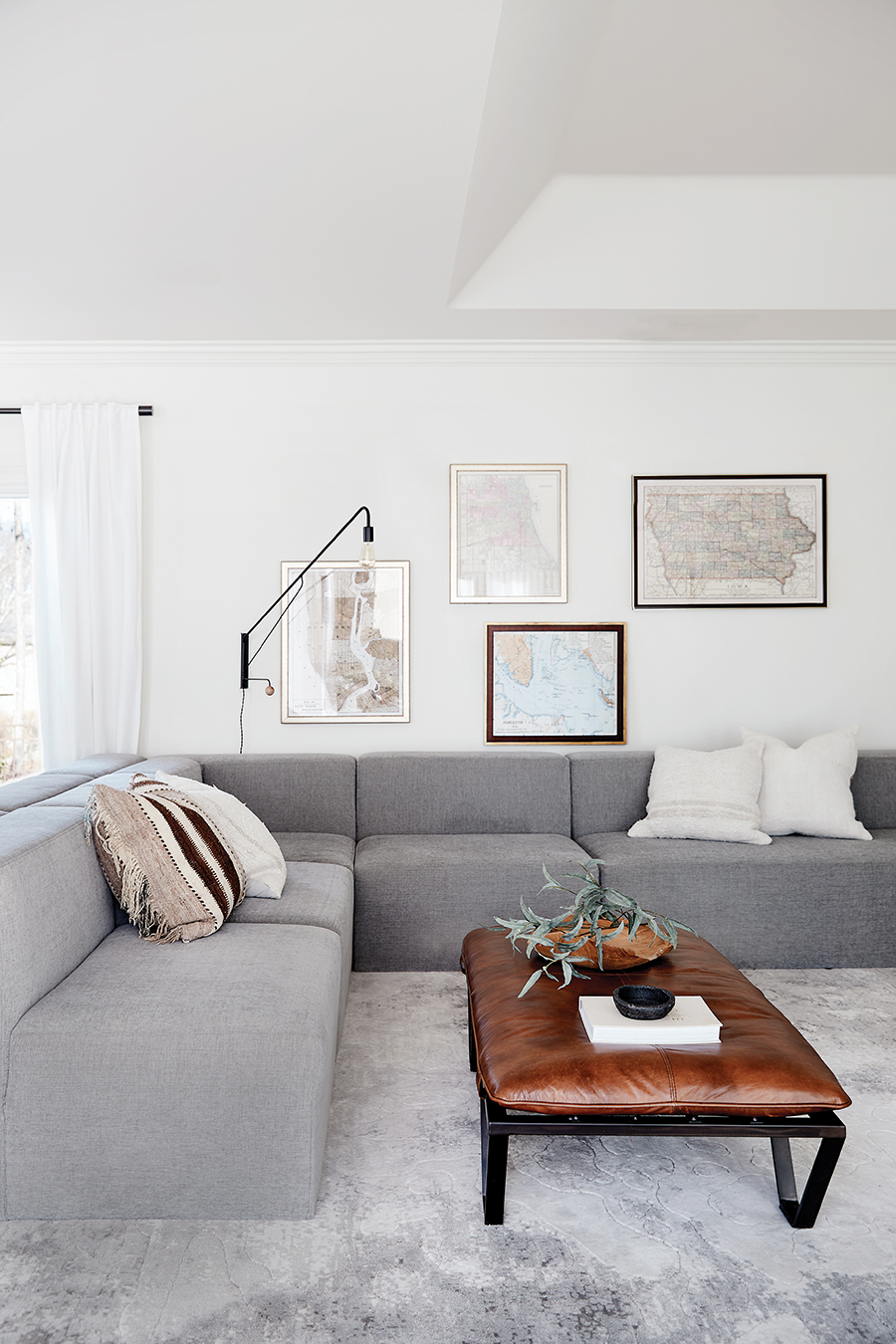 Big moves were something the family had done before, having relocated from New York City to Portland, prior to landing in Illinois. The couple met and got married in NYC, where their first child, Quinn, now 17, was born. Hawkins, 15, and Eliott, 13, complete their family of five.

Having settled on Greensboro, the search for a house began in earnest. “JD was traveling down a ton for work.” That spring, the family visited and toured Grimsley High School. While Erinn had been down a few times with her husband, the trips were short. Still, they were able to get a sense of the place.

Then their agent showed them a large Starmount house within walking distance to a golf course. A perk for JD. It also offered tremendous privacy, and the house wrapped around a stellar pool with a Buddha statue on the deck.

It was the last house among several they saw. 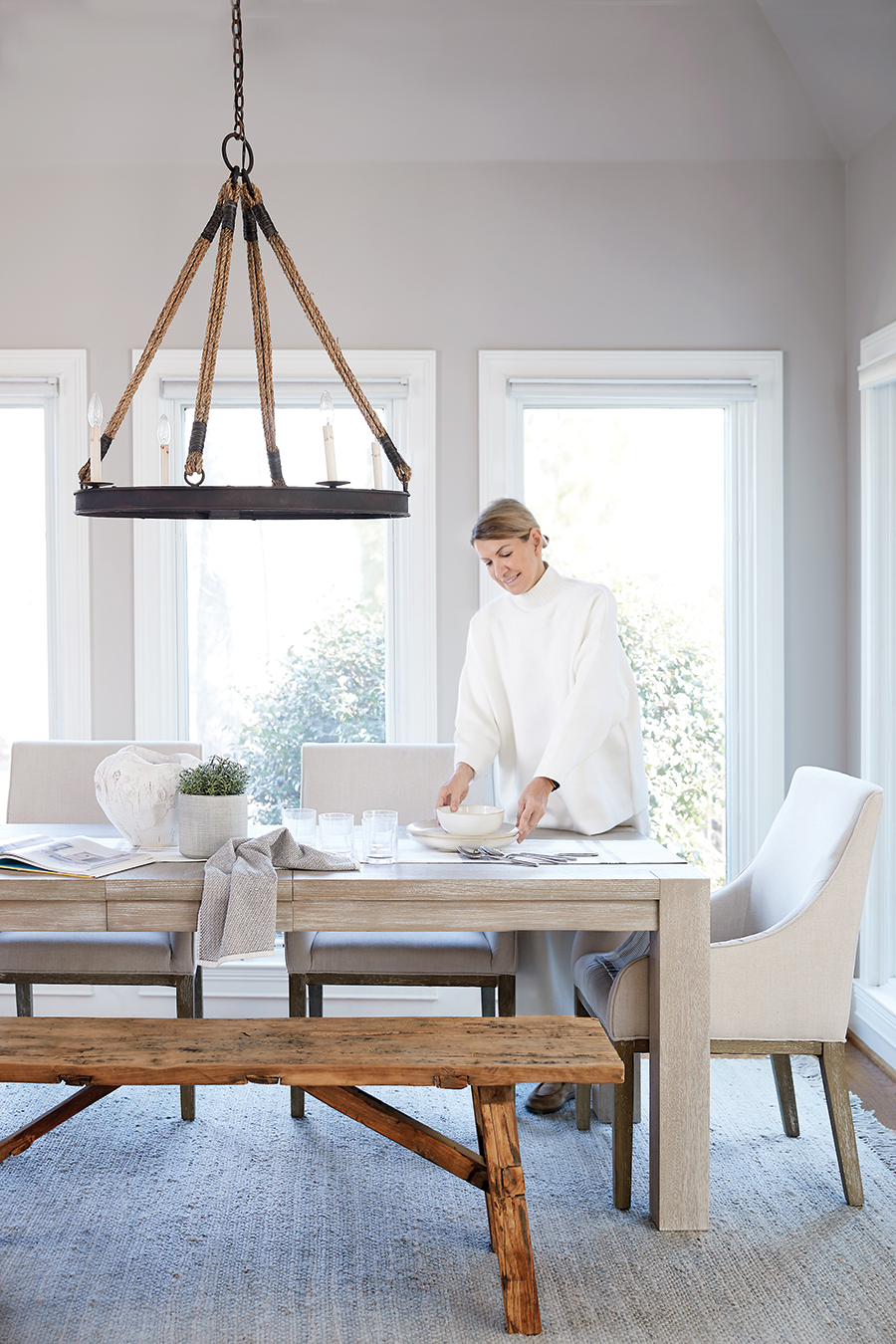 “We didn’t know Starmount was a great neighborhood.”

While it was many of the things they wanted — a spacious house and layout — it was decidedly formal and traditional, completely different than what Erinn sought. And the previous owners preferred saturated color.

Sherry described it as “Romanesque,” possessing several elegant architectural details and, here and there, some “don’t touch” aspects — suboptimal for a younger family. At the same time, she realized that mere cosmetic changes would transform the house without removing a single wall.

As soon as Sherry saw the house for herself, she was able to look past the bold colors and impractical features. She felt like she could “make it work.”

It was decided. The new owners planned to be living in Greensboro within six months. Downplaying the formal décor was key. So down came the expensive drapery, complete with swags and jabots. Sherry recommended airy white curtains — or none. 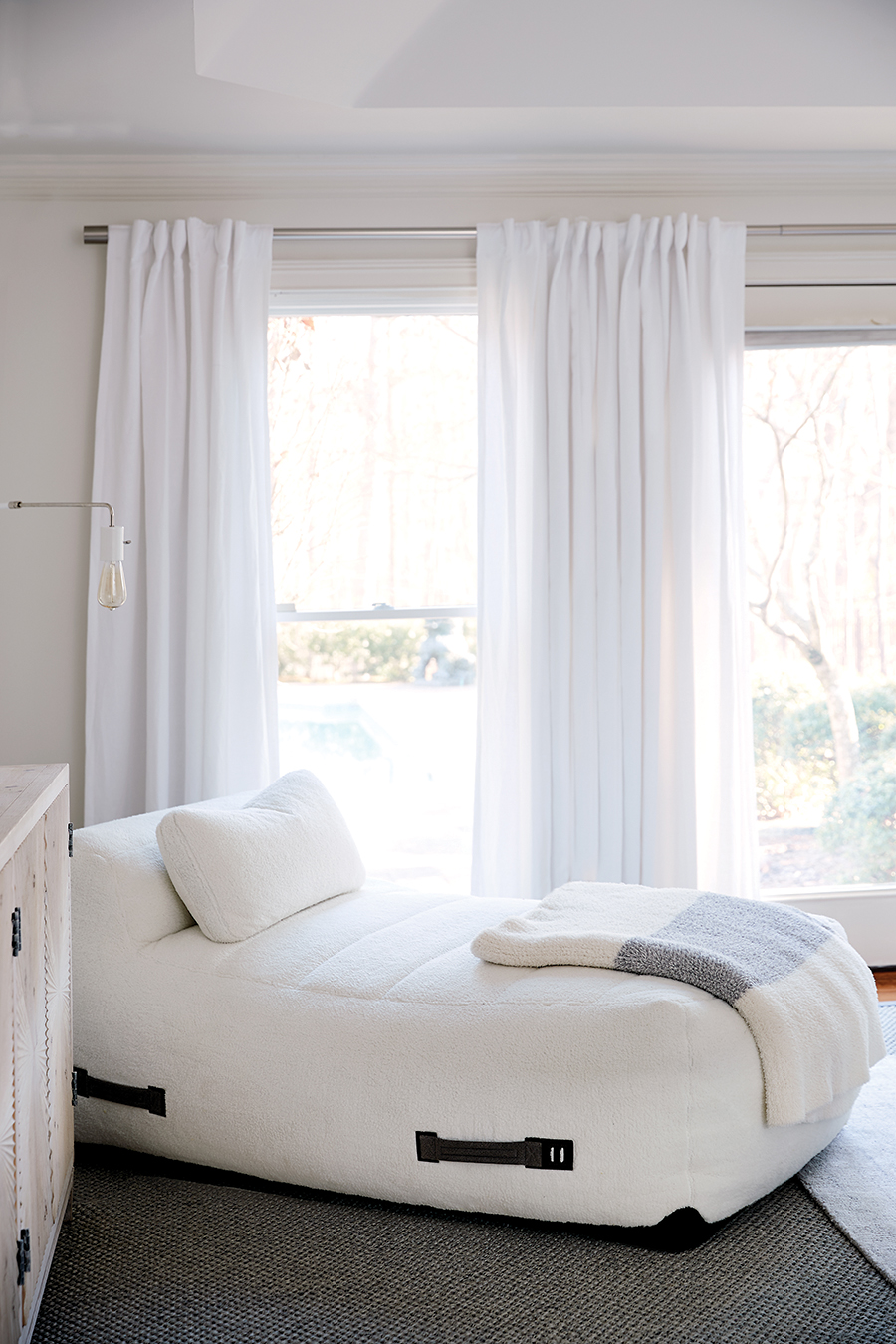 Thick dark molding was painted white, and the rooms also, as Ben Moore moved in and took over. “China White. Lisa was adamant about that. It brought the temperature down,” says Erinn. “Lisa calmed the interiors with neutrals.”

Down came the ornate chandeliers. A new one was chosen from a Charleston designer.

As the house transformed, Erinn grew a bit nervous — perhaps it would seem sterile. “Is it going to be cold?” she fretted privately. “But Lisa — she knew.  ‘Trust me,’ she kept saying. So, we did. But I wanted it to be comfortable.” The couple decided to banish all former furniture from the main floor to upstairs and go with new choices, curated with Sherry’s help. “I worried about the white slipcovers, but Lisa told us they’d be fine.”

For the most part, the owners saw little more than painting, refinishing and fabric samples as Sherry took command.

“We moved in, sleeping [upstairs] on the floor on mattresses,” Erinn recalls, as the downstairs remained off limits.

In September came a big announcement: “Lisa asked us to leave the house for six hours for the reveal.”

It was exactly like something you’d see on TV — a dramatic debut. The family returned later that day to a stunning transformation. Sherry’s team had the furniture situated, window treatments done and accessories in place. “I hadn’t seen the totality,” says Erinn. “I started crying when I went into our bedroom.”

The designer had totally nailed it.

Now, the question that Erinn asks with a too-good-to-be-true smile while sitting in her sun-drenched family room is, “How did I get here?”

Regardless, she is grateful for what she calls a definite “life upgrade.”

“Illinois is tricky,” she explains, referring to the higher cost of living, severe weather and heavy traffic. But Greensboro?

“It’s twelve minutes anywhere you go,” Erinn marvels. “We really felt lucky and blessed to be where we landed.”

By late 2019, the family were assimilating. “We went to a Starmount Christmas party when we first moved here and had such a blast.”

Then, 2020 arrived and socialization ended beyond their new home.

Now, in the time of a pandemic, the family of five has discovered a perfect place and a new way of being together. “We played a lot of Yahtzee,” says Erinn with a smile. “The kids are so happy . . . we all have found amazing friends. At this stage in our lives, its exactly where we wanted to settle.”

Beyond the window as summer approaches, the pool beckons. “As crazy as it sounds,” she says, “it feels like we have been here for a long time. It feels like home.”  OH