“In my dad’s mind, this cabin is a rustic refuge in the woods,” says Triad architect Michael Clapp. But he recalls how his father, Larry Clapp, skeptical about Modern architecture, “was scared I’d drop a glass-clad box in the woods and say, ‘there’s your cabin.’” Larry was adamant: “I don’t want huge walls of glass.”

But in the end, Daddy got exactly what he’d hoped for. An organic place, blending into nature. Understated. Rugged. Handsome. With a simple, wooden and stone-accented exterior in an untouched, heavily-wooded plot on the family farm near Whitsett, the cabin is small — 745 square feet. But it looms large to both father and son as a legacy project that ended up connecting three generations, all the way back to Michael’s grandfather and beyond. The Clapps, after all, settled in this area in the 1700s from Pennsylvania.

Well before he began practicing architecture in 2007, Michael and his father, Larry Clapp, owner of the ad agency Austen, Li & Clapp Inc., had been talking about building a cabin. 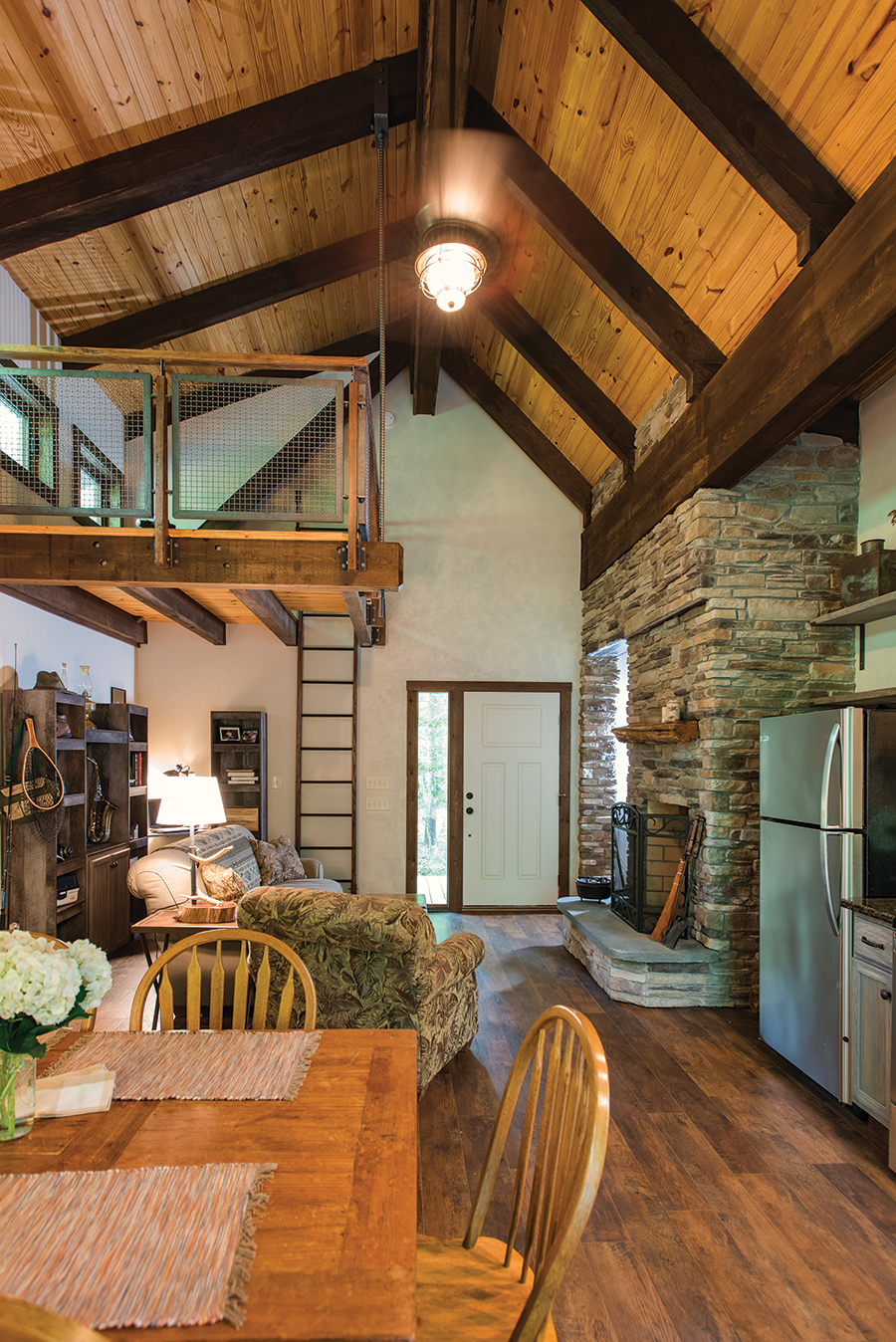 Michael, whose converted barn residence was featured in O.Henry in March of 2019, heard his father’s request about walls of windows. But no architect wants a cabin to seem dark and depressing.  The challenge, of course, was accommodating natural lighting. “Light changes in the winter, when the leaves drop,” says Michael, who has a Bachelor’s in Architecture, summa cum laude, from the University of Tennessee, Knoxville, and a Master’s of Architecture from Harvard Graduate School of Design.  The building, he felt, must respond to the seasons, cool and dark in the heat of summer, and light and bright in the winter.

After the cabin was strategically situated (more about that in a minute), the windows and glass were carefully placed — without creating the stark glass cube Larry Clapp feared. Initially, Michael said his father thought the windows were huge. But over time he realized they were correctly scaled to accommodate the roof’s deep overhang and tree cover. 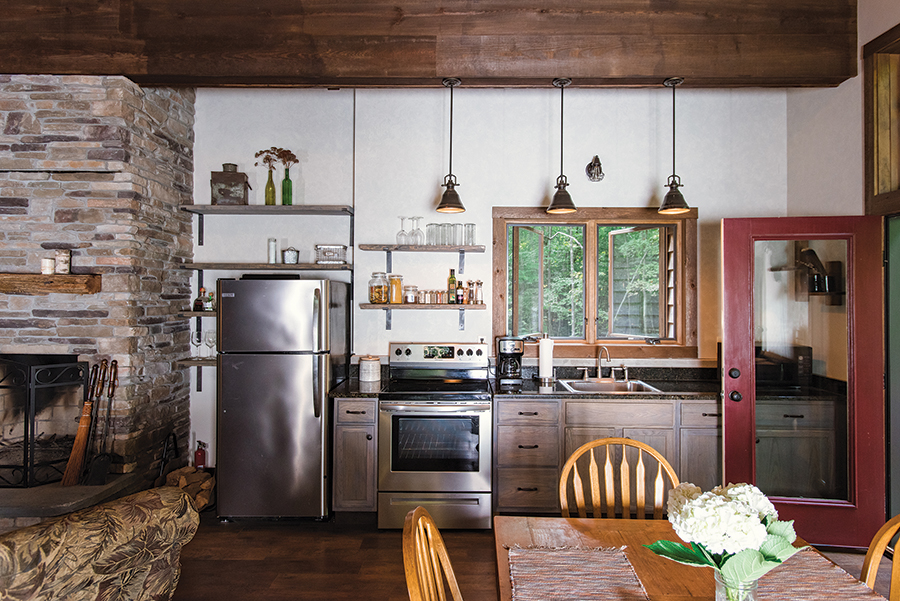 And so it was that father and son engaged in a process involving discussions, drawings, construction plans and, most of all, give-and-take. “It really was collaborative,” Michael says.

A gravel drive winds through the woods to the cabin that slowly emerges into view.  A front porch of stone and timber creates a soaring entranceway. Though small, the cabin is neither a kit house nor a log cabin. The open concept with only one bedroom and bath is done so deftly that the size is misleading. “The intention was to be efficient with space,” he says, “not so much to be small.” It has a cathedral-like expansiveness that pulls the eye straight through from the front door to the view beyond.

Which brings us to another session of back-and-forth. A pond behind the cabin had been built 20 years earlier, where the family has long enjoyed kayaking, swimming and fishing.

“There’s a beautiful stream that runs nearby and feeds the pond,” Michael says. The stream, the pond, the terrain — all needed to be taken into account when siting the cabin.

When it was time to survey the space before breaking ground, Michael studied the space intensely, thinking of the access and path beyond to the pond. He was pleased with what he saw — except for one lone beech tree that, to him, threw things off.

His father said, no way.  That tree has to stay.

“Over the years, my understanding has shifted,” says Michael just a touch ruefully.  “I thought it [the cabin design] didn’t work if it was off its axis.  But it was more successful if it accommodated nature.” 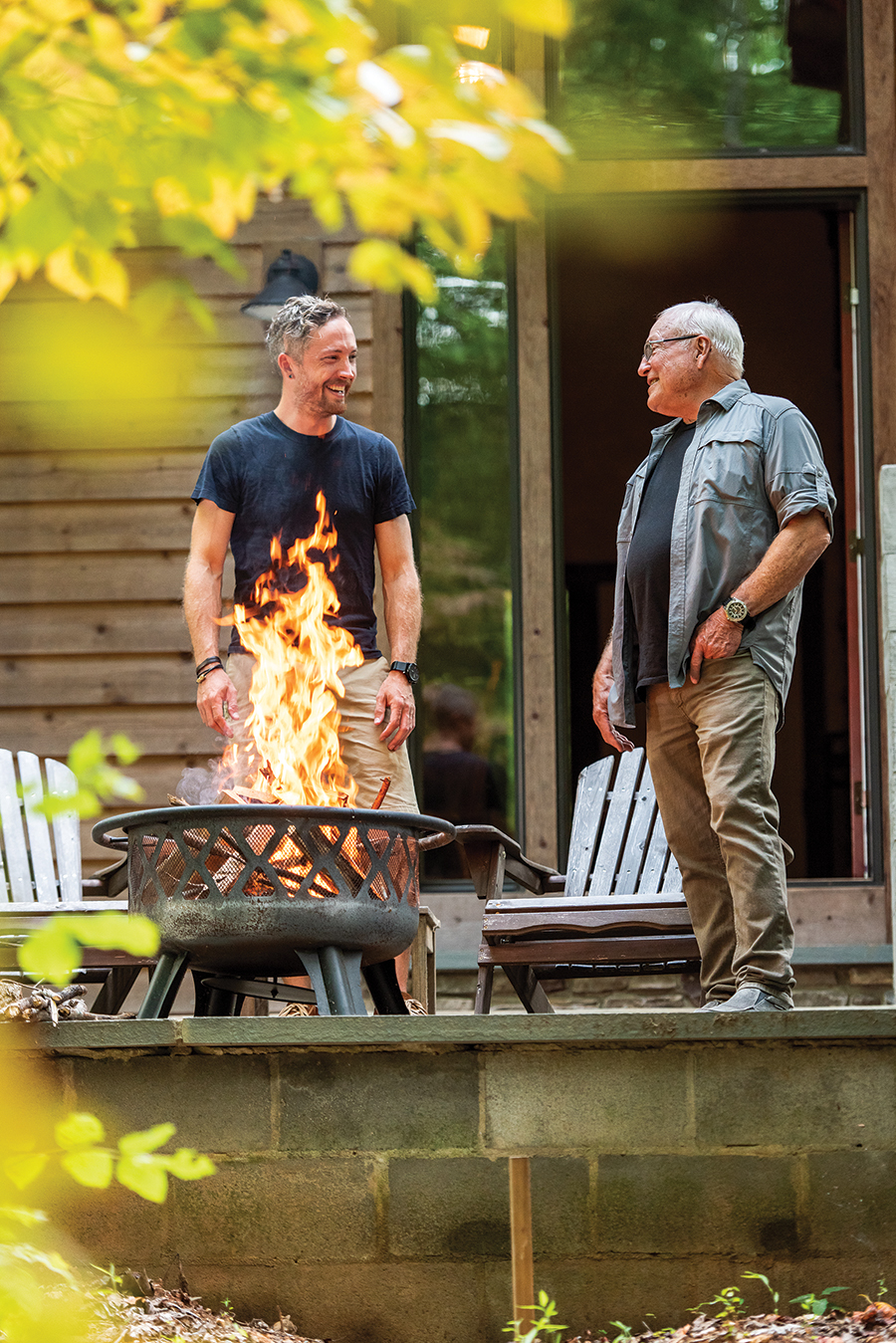 “It is a beautiful beech tree,” he concedes. And the orientation of the cabin is fine: “There’s no denying, when you are in this place, you are in nature.”

Standing outside on the shade-dappled porch at the back of the cabin, Michael excitedly points out the way the cabin is spatially sited on the forest floor, with an axis running through the structure.

The siting of the house, Michael explains, was always vital.  The sight line of what lay beyond the entry of the house was as significant as the cabin itself. His father agrees that the cabin is secondary to its surroundings: “It was always more of a vision of the surroundings than of an actual structure,” Larry Clapp says. “It was a labor of love that slowly started shaping a vision of being one with the environment.” For years, he says, “I would spend every free moment in the middle of 25 heavily wooded acres, clearing underbrush with nothing more than hand tools and a chain saw. It was an escape from the pace and stress of the advertising world.”

His son honored that in his design. All important, he says, is the axis running all the way through the structure, and how the details, including the interior, flowed from that original intention. Trim details, for instance, like a beam and a steel lintel in the fireplace, were designed to reinforce that linear swath, serving like an arrow. This directs the eye through the cabin toward an exterior path that Larry had created that extends down to the pond beyond the cabin.

But does the average person notice these details? Michael gets this question a lot. 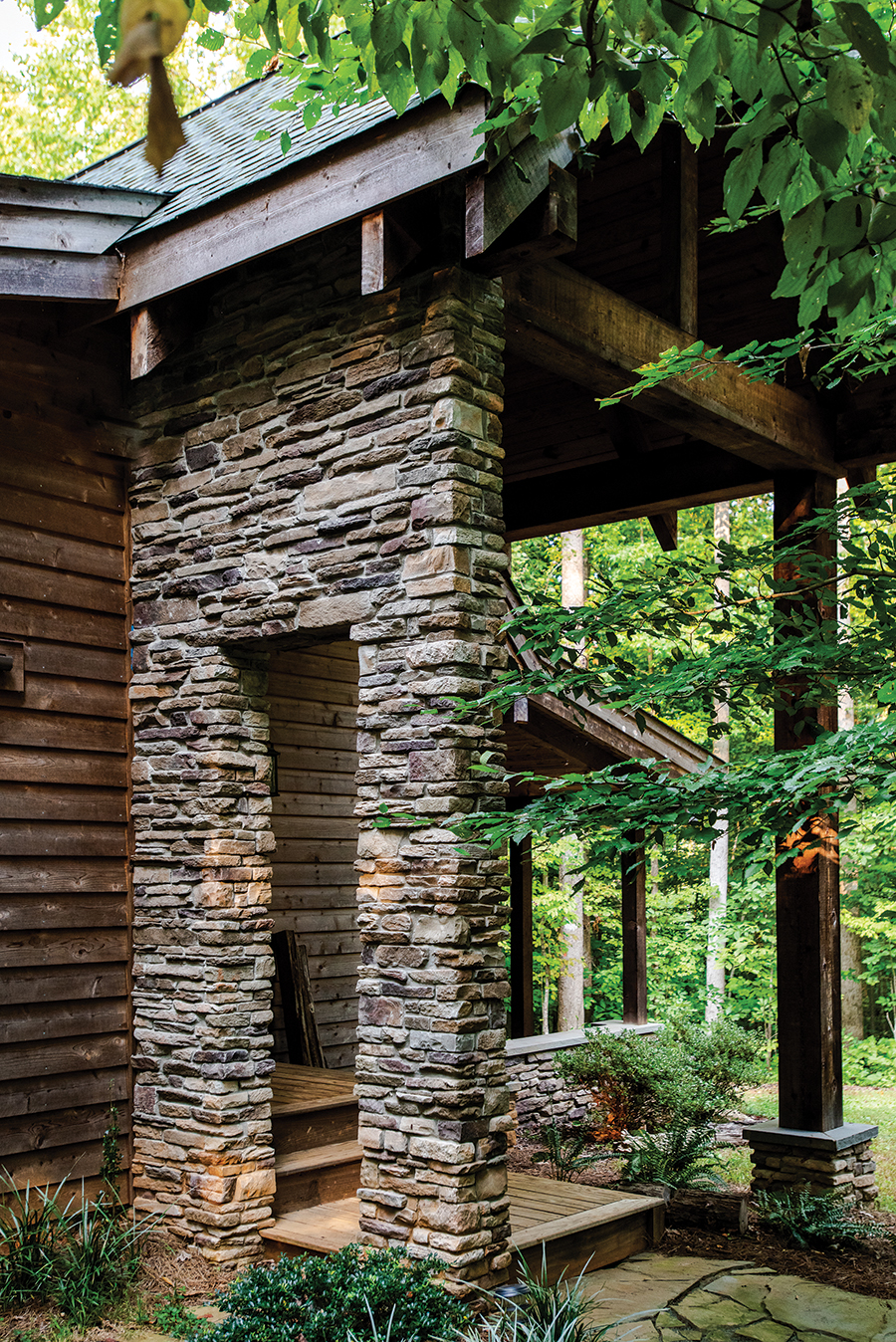 He explains that he envisions architecture as providing layers of meaning. Whether a visitor realizes it or not, they perceive design techniques that help define a space and absorb the space’s proportions. And unconsciously, he says softly, they intuit “This just feels right.”

Michae’s credentials are impressive — “Smee Busby Architects [Knoxville] in ’07/’08, HGA Arhitektuur in Tallinn, Estonia, in 2008 while in school, then PNP Design Group in Greensboro, Duda/Paine Architects in Durham between undergrad and grad.” But what he learned working hand-and-glove with his father were lessons that weren’t taught at Tennessee or at Harvard. Again, that word: “it was collaborative.” Then, “humbling.”

“Conversations were important so my father didn’t feel I was taking the project and running with it,” he recalls. “I had to learn how to listen, and not just to words — but the emotions for the space, and his ambitions for it.” Their conversations were freighted with meaning.  The process provided Michael a valuable tool, a chance to learn the vital give-and-take of client relations.

Father and son communicated long distance after Michael left for Massachusetts. “I started producing the conceptual designs, then construction drawings in 2013 — moving into 2014.  Construction started right when I left for grad school in October 2015. I was 31, older than many in my class. I was the old guy at Harvard College,” Michael grins.

Calls flew back and forth between Whitsett and Cambridge. Larry sent Michael images as the build progressed.

Michael first visited the emerging cabin in 2015 at Thanksgiving — his first trip home from Cambridge in months. “It was so exciting to see it coming out of the ground.”

“With very few adjustments we agreed on the plans for my cabin in the woods,” Larry recalls. All important, says Michael, was that “He had a clear vision of what he wanted it to be.”

Now, Larry says, he’s quite pleased with his rustic cabin, though he adds, “The cabin is much more sophisticated than I ever imagined.”  Still, “it fits into the surrounding environment seamlessly and provides the solitude I desire. It is very comfortable and virtually maintenance free.”

Burlington builder Brian Alcorn was adamant about quality, Larry says. “The cabin was constructed by a superior craftsman very rare these days.”

The place is still evolving six years on. Larry continues to work on the interior and exterior. Standing in the late summer light filtering through the windows that are just the right size, Michael points out the finishes his father recently added to the cabinets and walls. “The walls have a textured, faux-painting technique he felt was appropriate.  The railings for the loft recently went in six months ago.”

There is also a new rolling library ladder that accesses the loft.  Work on the outside fire pit has begun, the footing already poured. A new coffee/beverage station has been created. More cabinetry is underway. A barn door has been added on the front of the house, concealing a utility area.

Michael has come up with a name for the cabin: “My Father’s Son.” Though it’s a tad bit eccentric, he is obviously pleased with it and is quick to point out that the “Son” does NOT refer to him — or the “Father” necessarily to Larry. When he named the cabin, Michael was thinking of his grandfather, Pa Paw, and how Michael’s dad has developed the same sort of gentle personality his own dad possessed, with similar mannerisms — which Michael values and emulates. The cabin and its name have come to personify for him the father/son relationship and how social skills and strengths are passed from one generation to the next, just as he learned through this small cabin enormous lessons in the gentle art of communication and compromise.

“It’s hard not to be married to a point of view,” Michael says, standing outside where the new fire pit is emerging, reflecting on the spared beech tree that he has come to cherish.  In the end, however, the little cabin his father now enjoys has become a metaphor for him about listening — and learning — and fatherly love.   OH