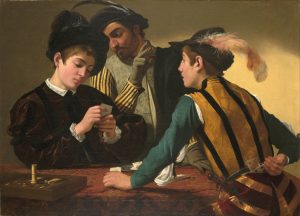 Play the hand you’re dealt, the old saying goes. But sometimes the deck is stacked against you, as Italian Baroque master Caravaggio suggests in his iconic painting, The Cardsharps. Now in the collection of the Kimbell Art Museum in Fort Worth, Texas, the canvas depicts what appears to be three guys just hangin’ out for a round of primero (an early Italian version of poker). Look again. Caravaggio’s dramatic use of light and contrasting shadow — chiaroscuro for all you arty types — and 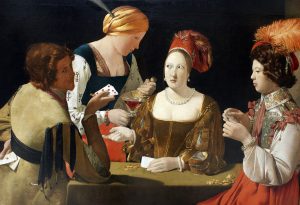 Georges de la Tour, “Cheat with the Ace of Diamonds”

exquisite detail reveal far more. The young lad on the left ponders his hand; if he were a modern-day bloke, the bars of “Luck Be a Lady” would be thrumming through his head. His rosy complexion and velvet-and-lace finery suggest someone not yet wise to the ways of the world, unlike the other two wise guys in the painting. The one opposite sports the traces of a mustache, an insouciant feathered cap and flashy doublet with a dagger hanging from its belt; his left hand is poised to knock over the game board precariously perched on the table’s edge — a convenient distraction affording him the opportunity to slip those cards behind his back into the deck. The older fellow casts an eye on the oblivious young man’s hand, signaling its contents with two fingers, one of which is barely visible through the hole in his glove . . . the easier to mark cards, dontcha know. Something is about to go down, and it ain’t gonna be pretty! 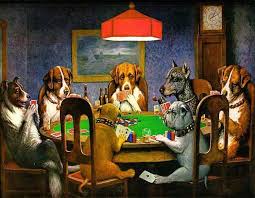 So powerful is Caravaggio’s painting, it has inspired several riffs, from Georges de la Tour’s Cheat with the Ace of Diamonds to Cassius Marcellus Coolidge’s infamously kitschy Friend in Need, featuring a pack of dogs playing — and cheating at — poker. You could even argue the poker scene from The Sting is a live-action variation of the trope, with Lady Luck ever constant to roguish Paul Newman. And who could blame her?