The green thumb of Bill Craft 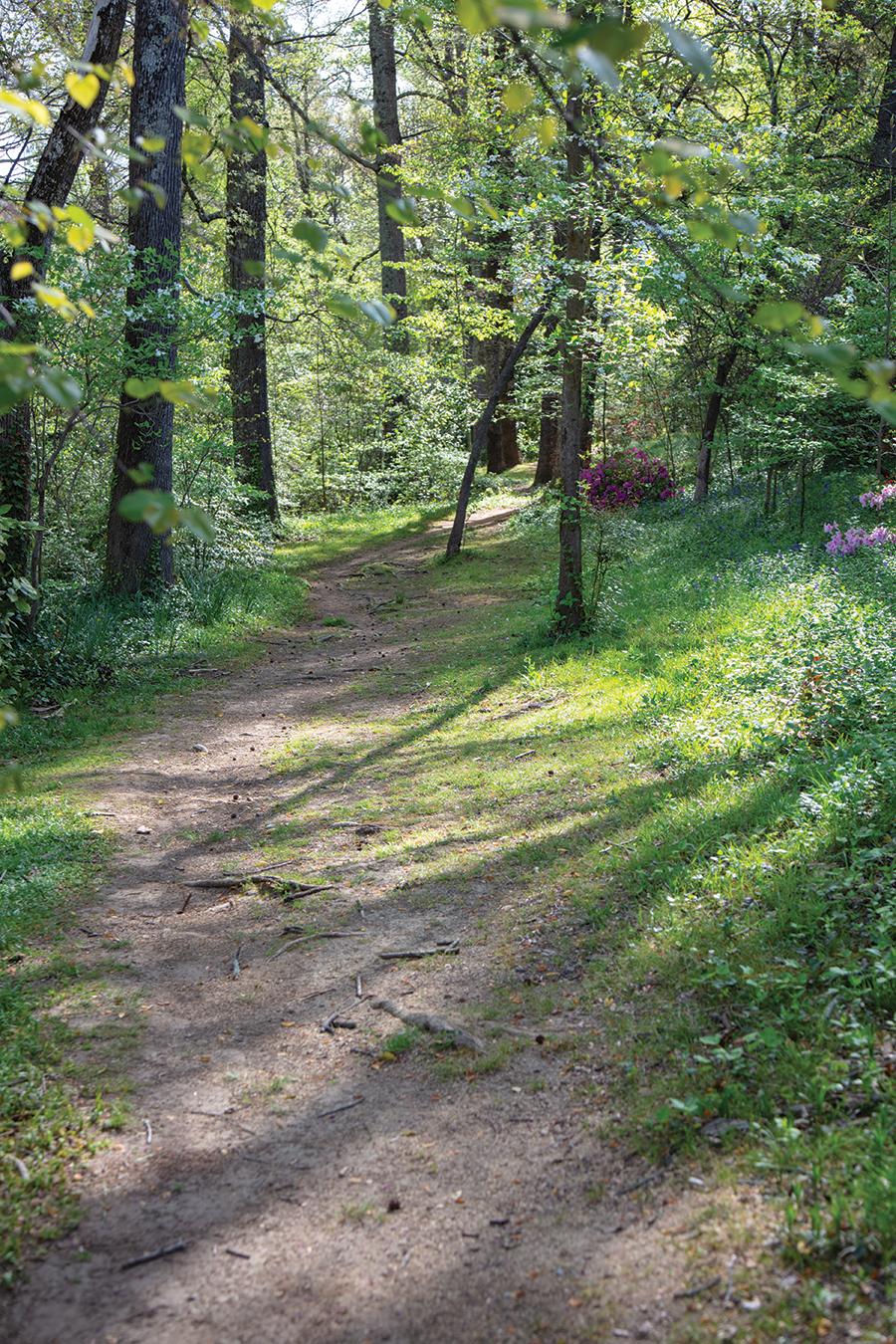 Bill Craft, head of Craft Insurance and self-styled nature lover, could have spent his dollars on self-aggrandizing gestures.

Wearing old shorts and battered sneakers, Craft took to the creek banks near the family home on Dover Road, rousing a few of his nine children to weed and play, creating a naturalized woodland “creek park.”

He toiled there and at other public spaces for 50 years until the end of his life.

Craft’s headstone at Forest Lawn Cemetery simply reads “Greensboro’s Johnny Appleseed.” Yet, according to a horticultural inventory, Craft planted almost everything but apples in the public spaces he beautified.

He singlehandedly planted and maintained more than 100 species of trees, shrubs and rare plantings in his pet project — a namesake park in Old Irving Park just south of Greensboro Country Club — Bill Craft Park. The “creek park” he created was a perfect backdrop for his father’s labors, says Daniel Craft. “He kind of had a blank slate. . . . Nobody [else] looked after them.” Worn, meandering and unpaved paths seemed perfect for walkers and children at play. Nothing overly manicured.

He invited others to fall in love with the great outdoors, as he had. Adding dollops of color through plantings and taming overgrowth was enough; Craft knew when to step back from the canvas.

Resident Ann Robinson says the idea was “to create a walk in the woods.”

Her sons Will and Patrick Robinson spent hours playing there when young, making forts from culled bamboo and splashing in the creek with their dog, Nipper.

Craft was restless, possessing an unusual amount of energy. As an only child, he inherited his father’s business, dutifully leading it from 1954 until 1996 when his children took over. But he bolted outdoors as often as possible on a dizzying mission: beautifying grounds at St. Francis and Holy Trinity Episcopalian churches, as well as at St. Pius and Brightwood Christian Academy.

He also turned his attentions to Fisher Park, the Greensboro Science Center and Irving Park School. 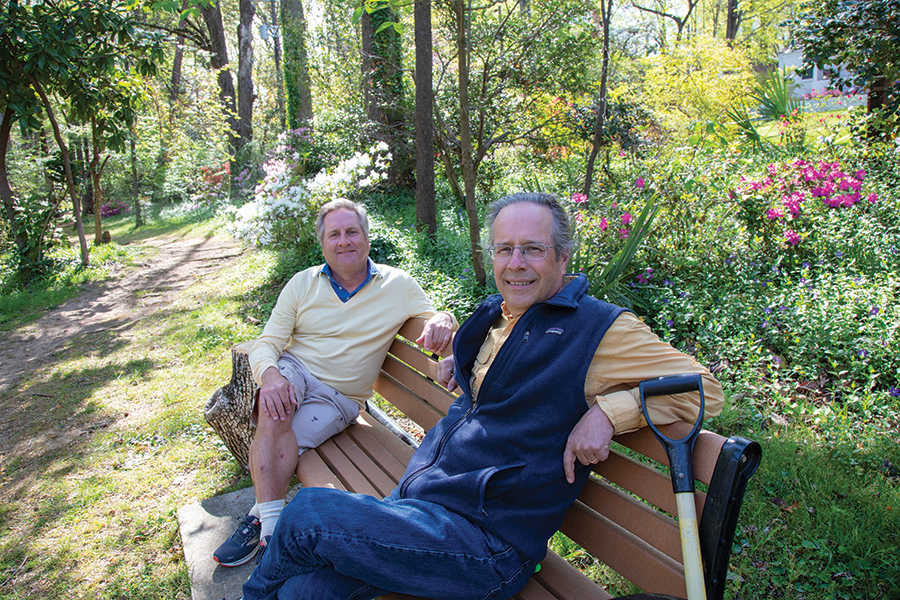 Craft even kept a garden for seniors at Evergreens Nursing Center and took them flowers.

After graduating from Carolina, he served in the Coast Guard before marrying Joanne Brantley. They had six sons and three daughters. Craft’s Chevy S-10 pickup’s tag read: “9Younguns”. David still has it.

Daniel recalls being “dragged to parks, to a playground or Scouts” on Saturdays. Craft led Boy Scout Troop 216 for years; all six sons earned their Eagle badge, like their dad.

David says their colorful father, turbocharged with energy, “didn’t like sitting around talking about things.” An understatement.

His favorite expression was, “Okey-doke.”

Robinson, whose family moved to Blair Street 25 years ago, soon encountered Craft’s energy. Despite his thatch of white hair, he carried buckets and buckets of water, tending plants.

“When we first moved to Blair Street,” Robinson remembers, “I ran into Bill in the park — working, planting as usual . . . and I told him that I had two boys who could help out if needed. He kind of nodded and pointed to our house on the corner to say, ‘Is that where you live?’” That Saturday morning, the doorbell rang, “and there was Bill with buckets and shovels. I opened the door and he said, ‘Where are those boys?’” Robinson woke her sons, and they returned exhausted. 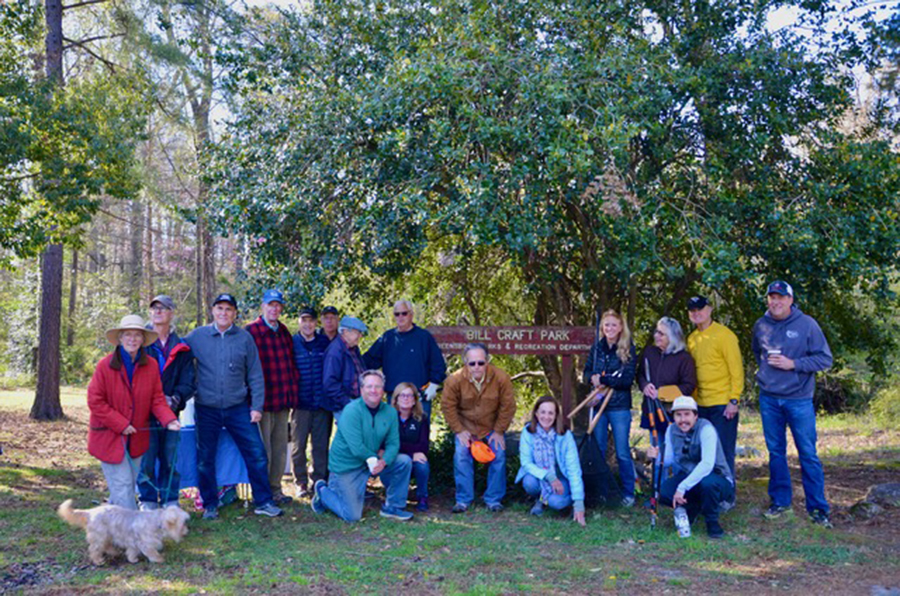 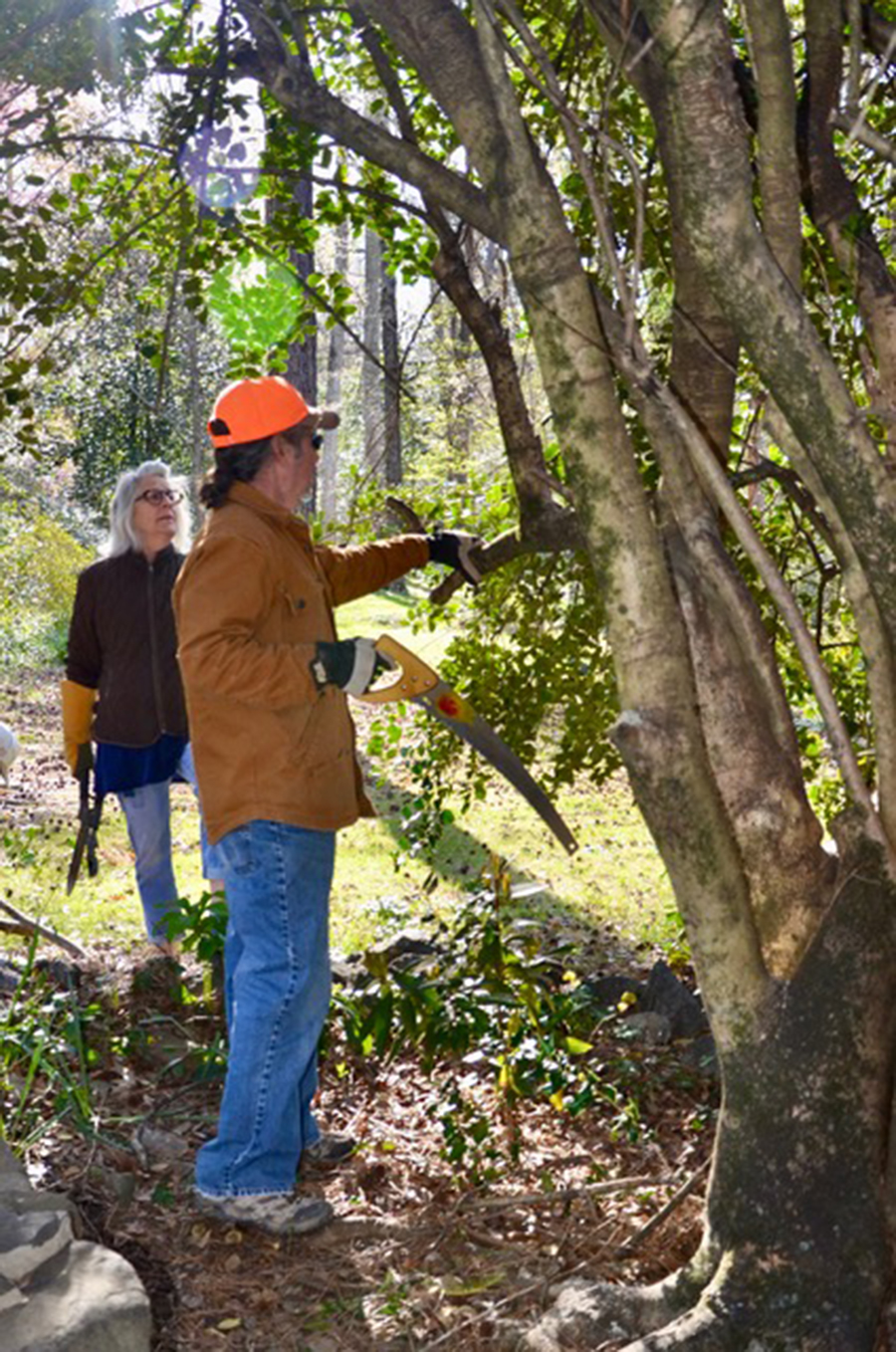 Equally fond of hiking and biking, Craft volunteered on Greensboro’s network of bike trails, which eventually extended through Lake Daniel, Latham Park and Lake Daniel Greenway, on the Benjamin Parkway.

Indefatigable and upbeat, Craft was “kind of a dreamer,” once driving a few of his children to Morehead City in search of Spanish Moss. He stuffed the station wagon, returning home the same day.

“The moss didn’t make it in our climate,” adds Daniel, “but it got us out of the house.”

Stories about Craft tumble out of family and friends.

After years of his beautification endeavors, the Chamber honored him in 1974. A comical exchange with philanthropist Joe Bryan became his favorite story.

“He got the Dolley Madison award the same night Joe Bryan got an award,” Daniel recalls.

“They both lived in Irving Park — knew each other. Dad started talking to him, and said, ‘I’m getting an award for my park.’ Joe says, ‘I’ve got a park named after me, too. But they don’t make me work in it.’”

The Bill Craft Park grew as colorful as its namesake. Craft’s sons estimate there are easily “l00 azaleas and camelias alone — his favorites.” 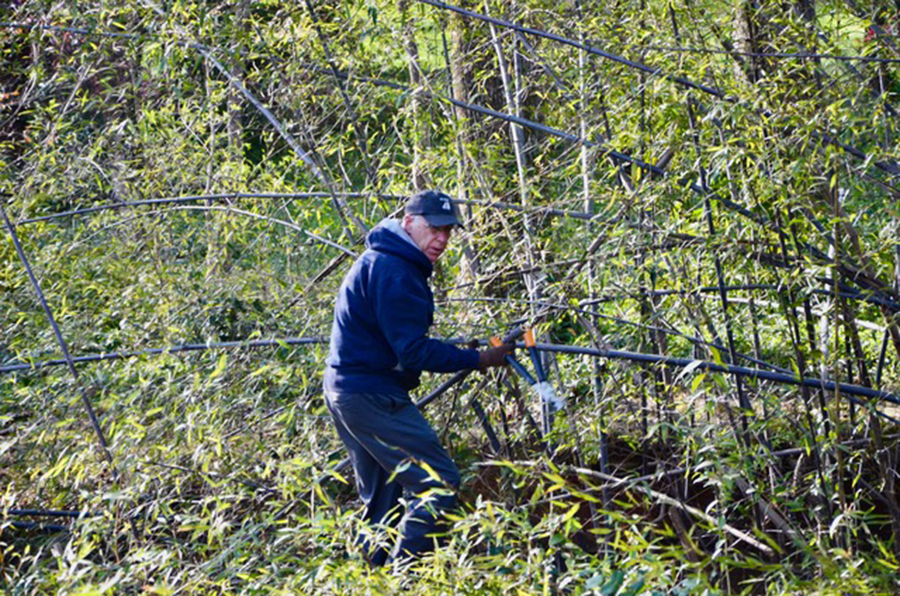 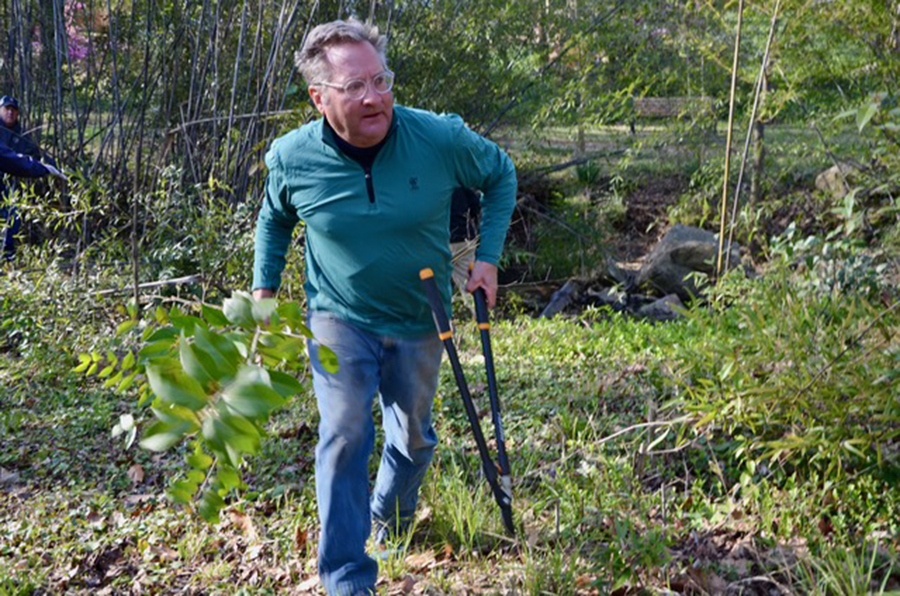 Daniel mentions a 1990 summer date with his later wife, Kathy. They were cycling toward Greenhill Cemetery and spotted a man working. “I think I said, ‘Oh, s—t,’” he spluttered.

“Kathy said, ‘What?’ ’’ Daniel recognized the unmistakably tan, wiry figure of his father.

“There he is, tennis shoes, no shirt, and a black Speedo bathing suit, planting a tree! That’s how she met him.”

David groans at the Speedo story, saying, “Dad was just living. Didn’t care about judgment . . . I thought he was a kind of a nut when I was a teenager.”

But they admired how their father juggled a vocation and fatherhood with many interests, never missing dinners. He watched no television, and read with the same fever that he brought to gardening. His sons say he took pleasure “in very basic things.”

Sons No. 9 (Daniel) and No. 8 (David) remained in Greensboro as adult siblings scattered.

If there is an apple tree, seems the Craft sons did not fall far from it. Daniel also likes to do his own thing. “I don’t need validation for what I do.”

He points out that David has been instrumental in building trails and creating the Haw River State Park. David points out Daniel’s devotion to the Bill Craft Park auxiliary.

Ann and Russ Robinson were also among original members. “The auxiliary started after Mr. Craft passed away . . . We were in the group that got it going with the Crafts and other neighbors — many of whom were friends and contemporaries of Bill’s,” she recalls.

A dozen or so auxiliary members meet twice annually at the Bill Craft Park sign, sharing donuts and coffee the Robinsons bring before weeding, pruning and clearing. 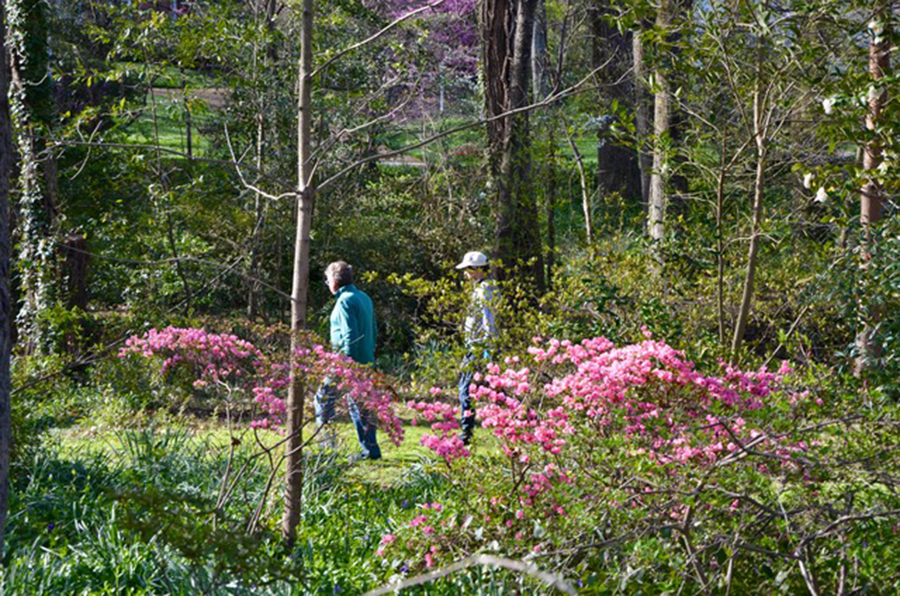 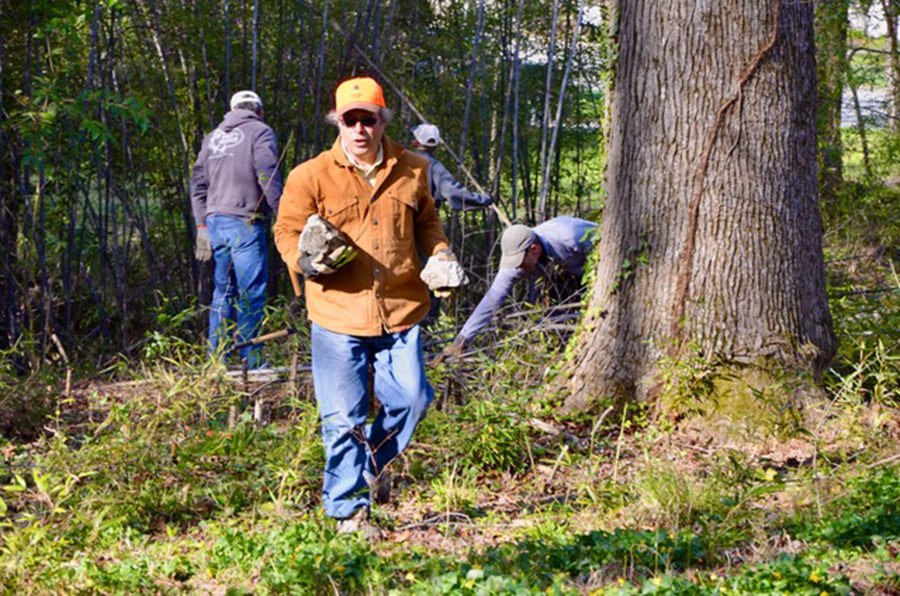 On workdays, stories emerge about the man who inspired it all.

“We control the invasives. Prune some things here and there,” Daniel says. “One of Dad’s biggest regrets was planting bamboo there.” He tackles the dreaded bamboo first.

For the Robinsons, the park became important to their sense of community. “Our most recent park project has been very fun,” says Ann. “There was a really big Ash tree that came down in front of our house in the park. It was during COVID. I’d been involved in a fundraiser in the mountains that involved making wood-turned bowls from a tree that came down and thought we could perhaps do the same for Craft Park.”

Woodworker, Rick Andrews made wooden bowls and ornaments that were sold last year.

“We even had one bowl that we gave to Rip Bernhardt — an old friend of Bill’s who, although he lives at WellSpring now, always tries to come at least for the coffee before the clean-up and visit. He was very touched by the bowl we gave him and to have a ‘piece of the park’ and asked me to take his picture on the stump of the old Ash tree to send to his friends.”

In 1991, the Greensboro Interclub Council recognized Craft’s outstanding civic leadership: a Jaycee, and a Red Cross and Kiwanis member, he served on most all the civic organizations. He joined nearly every outdoor group, including the Piedmont Appalachian Trail Hikers, the Guilford Wildlife Club and more.

David muses. “Dad used to say that being in the insurance business made him a good living and enabled him to do what he wanted to do . . . but if he could have been something else, he would have been a college professor.”

No doubt, a botanist.  OH 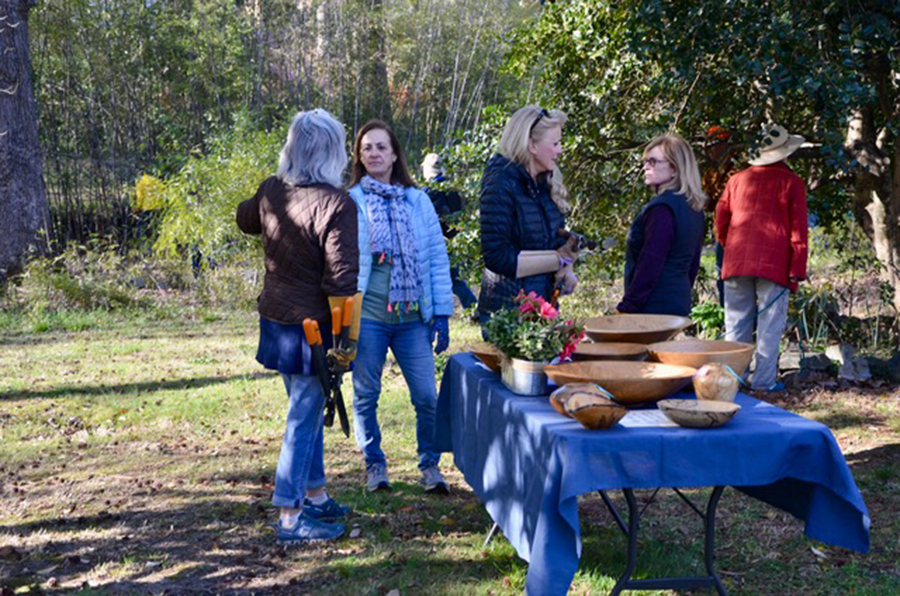 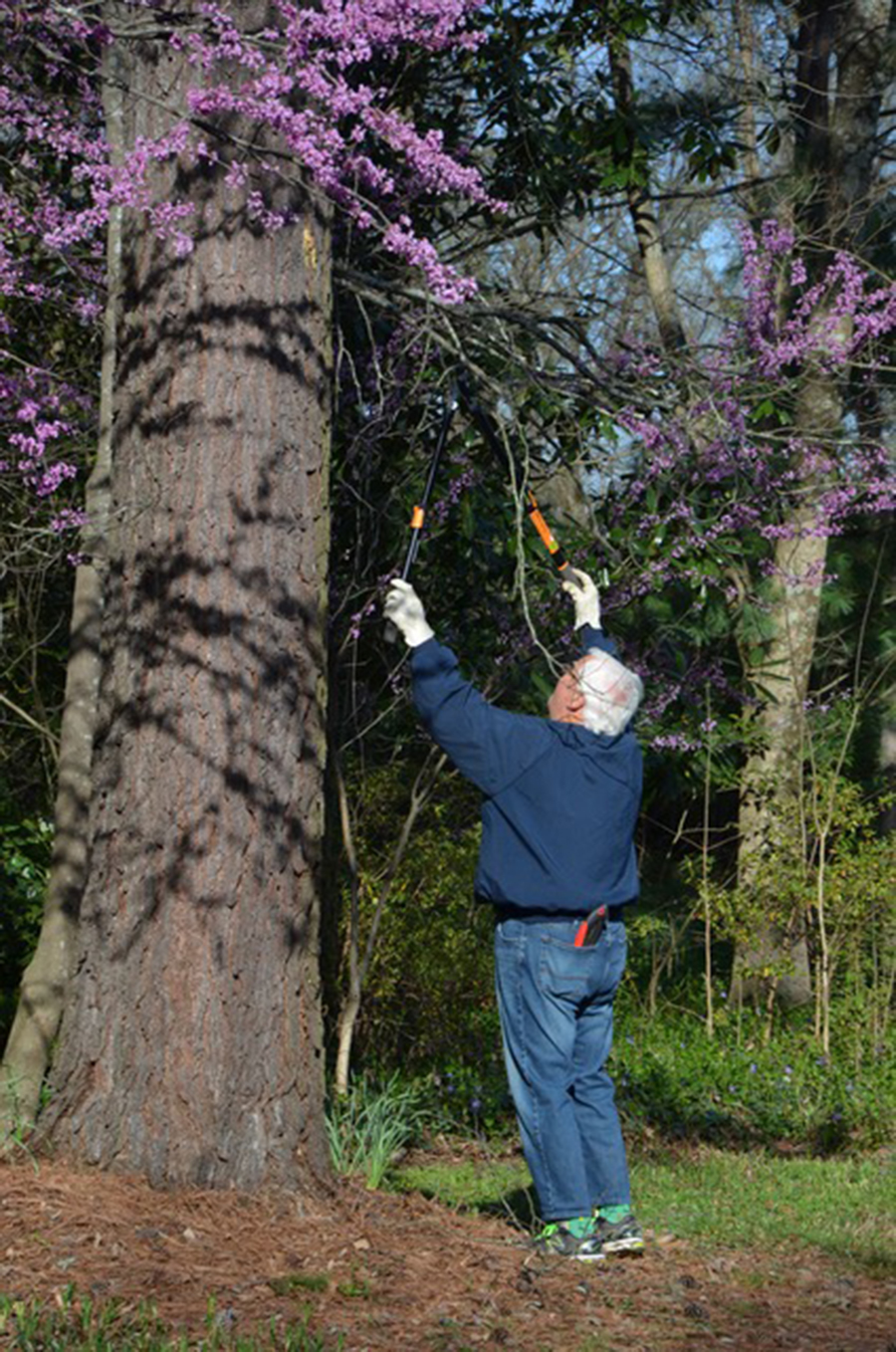 The Pleasures of Life Dept.Department, May 2022