Three women cultivate joy, connection and self-discovery through their work

Creating art is not for the meek. It’s gritty and emotional, filled with trial and tribulation, plus hours upon hours of grueling, behind-the-scenes labor such as stretching canvases, tediously cutting out tiny images from magazines until the hands start cramping or digging into the deepest parts of one’s soul. But as any artist knows, the hunger to create can’t be ignored.

Yet, an artist’s bravest act is being vulnerable enough to share your work with the world. Our city has cultivated a community that welcomes up-and-coming artists with open arms, and new creatives are arriving on the scene regularly, excited to be a part of the artistic and collaborative energy thrumming throughout Greensboro.

After all, the connection and community the Gate City provides are often what the artist seeks through her work — especially in a post-pandemic world.

We’re introducing three local artists who you may not yet know, but won’t soon forget. Each brings something unique to the art world, ranging from vibrant, music-inspired watercolors, to collage that explores transformation, to acrylic paintings that celebrate the wonder of the female body.

Surrealist Salvador Dalí once said, “A true artist is not one who is inspired but one who inspires others.” These “true artists” have brought their work forth as a way to tell their stories while inspiring others to see and feel their own truths. 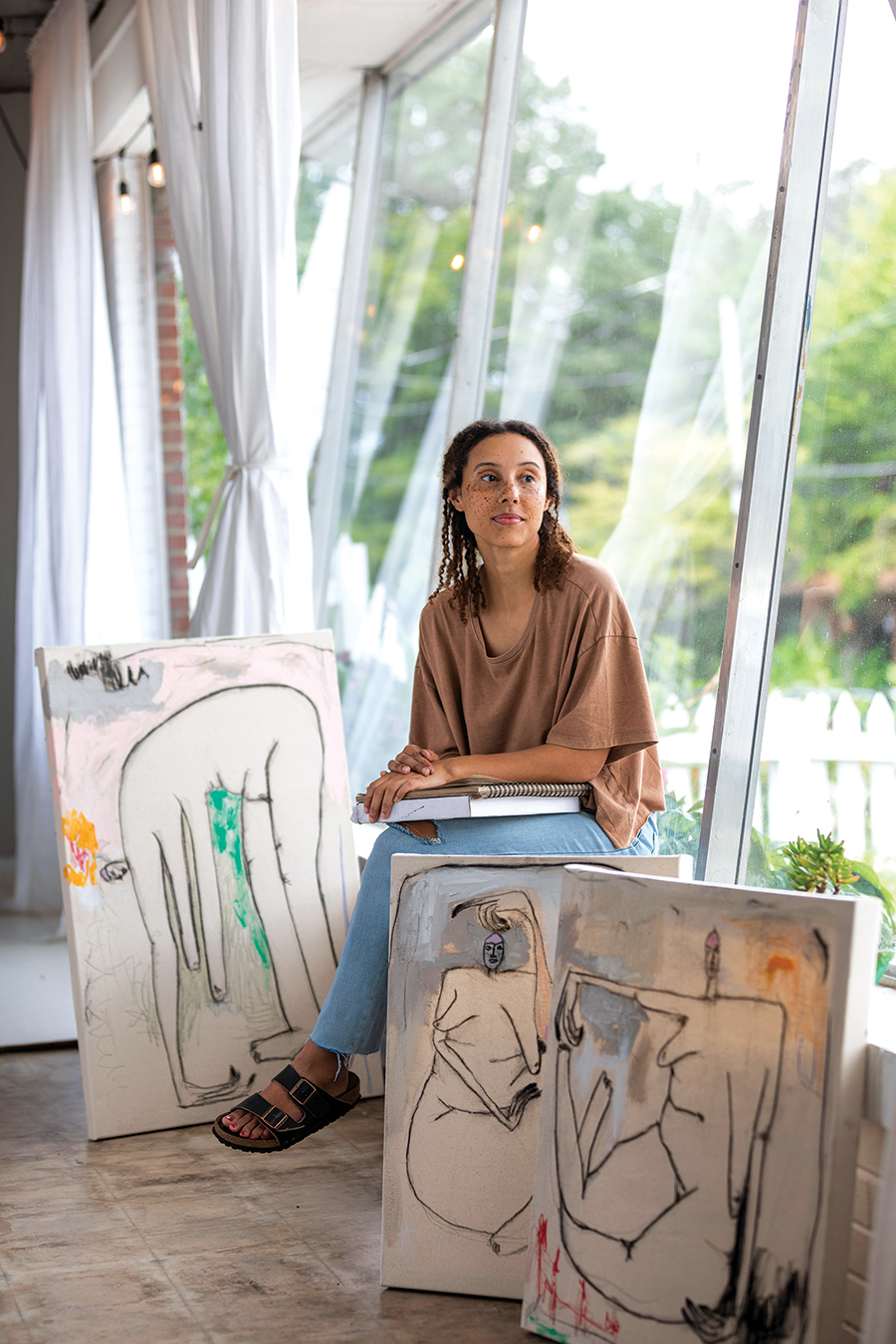 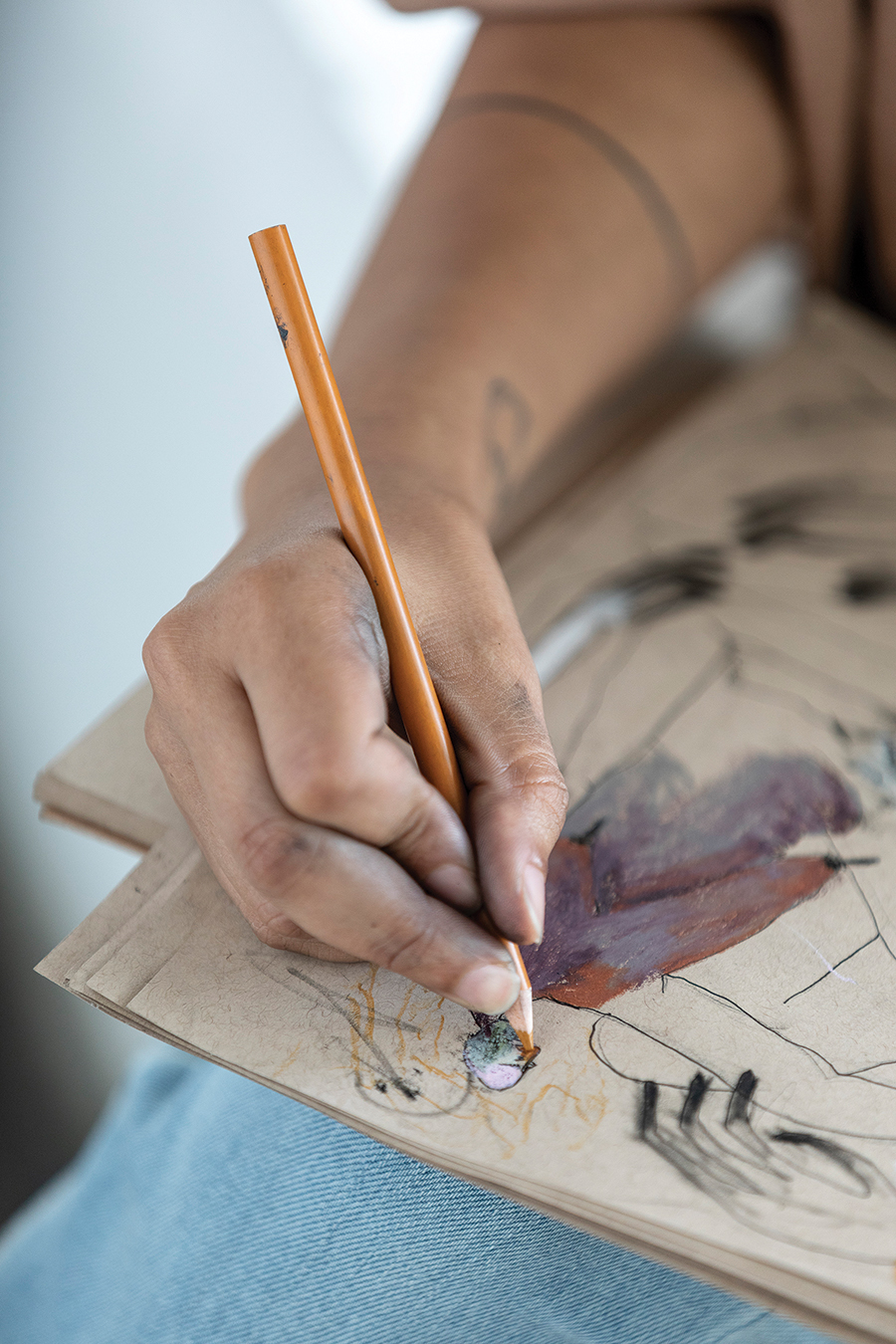 Reneesha McCoy | While the childern sleep

Perfect beauty in imperfection — that is what Reneesha McCoy sees in the world around her.

Whether it’s in her own body, the chaos of life or the so-called blemishes on her artwork, McCoy lives her life in a way that honors the raw state of being human, perfectly — or, rather, imperfectly — all of which is reflected in her paintings.

For several years, McCoy felt something tugging at her to create, but it was the 2019 birth of her son, Phoenix, that gave her the push to heed that call, leaving behind a 10-year retail career. After trying her hand at multiple endeavors, her partner, Scott, also an artist, suggested she consider art.

In 2020, with no professional training, McCoy picked up a paintbrush. “I kept thinking, ‘I have this feeling and I need to express it,’” she says. The 33-year-old mother of two trusted her instincts.

Inspired by the changes her body has undergone through childbirth and breastfeeding, her own raw emotions, and her desire to be inclusive, McCoy’s paintings feature nude female forms with a mix of skin tones, posed in a manner that often expresses insecurity. She uses acrylics, which are quick drying, allowing her to paint while her children sleep. 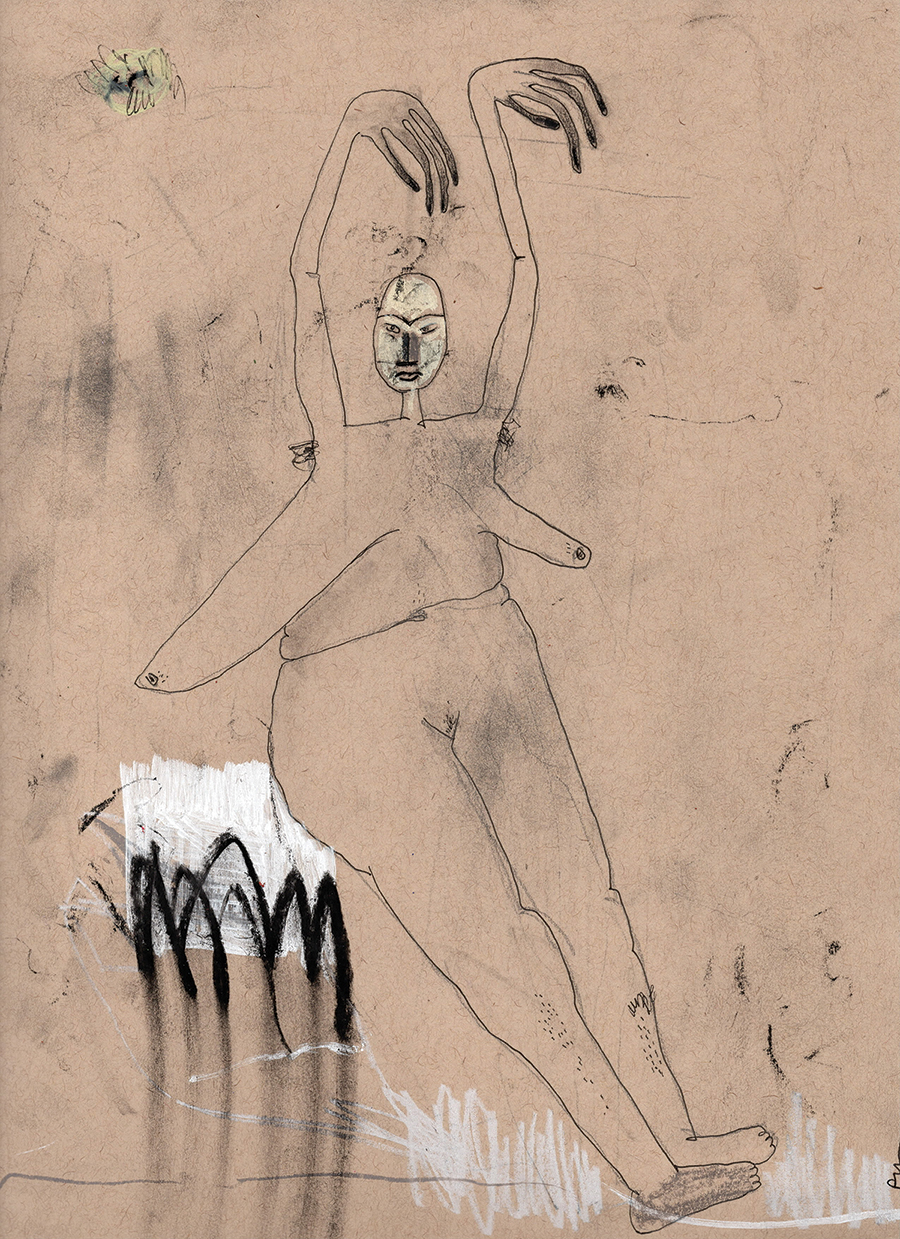 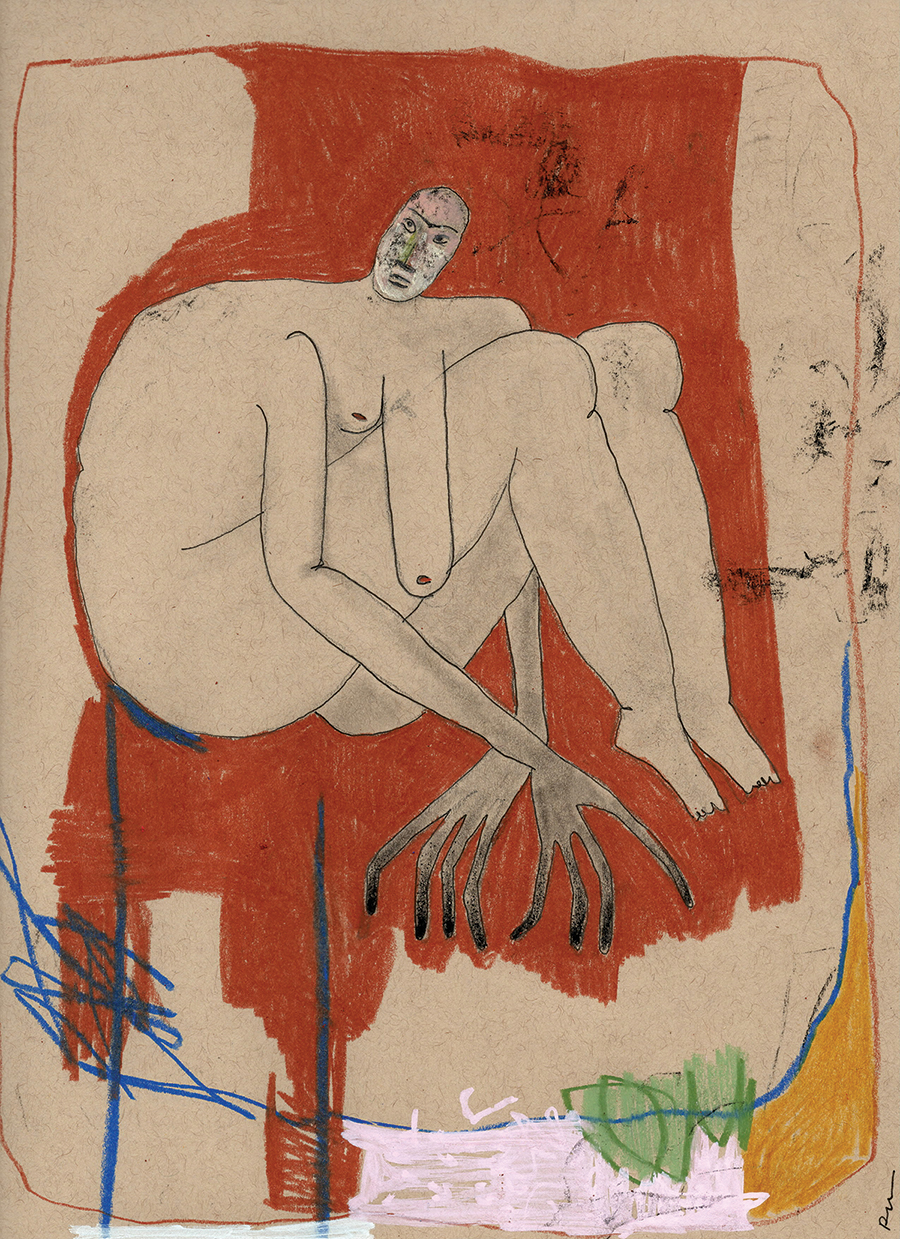 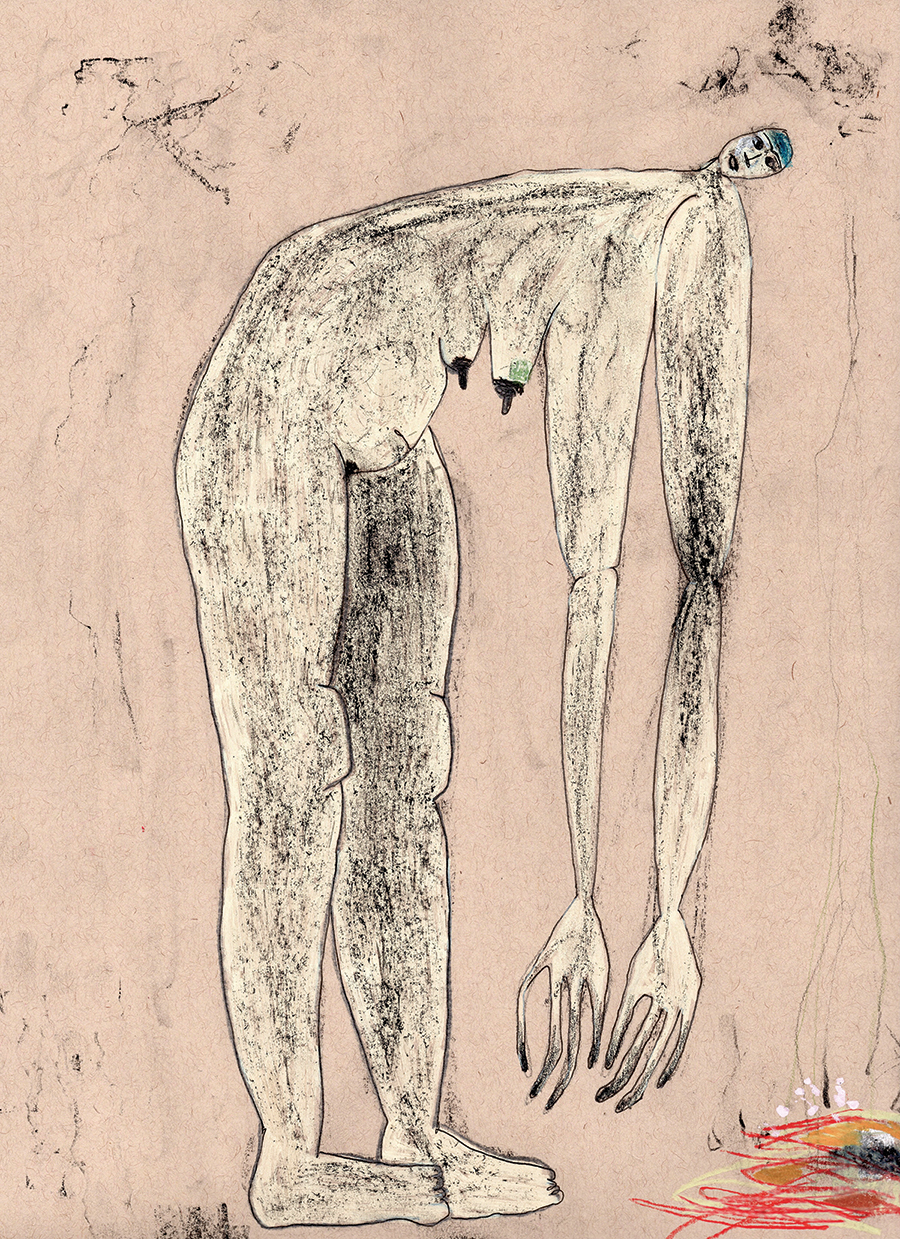 Left:  I Knew I Could Fly

Middle: Everybody Danced and I Sat Still

Right: I Cook Berries on the Fire

Working through her thoughts on her canvases, McCoy notes, “It is not only that I am just releasing everything. It’s also that it means something to someone else.”

McCoy’s paintings have given her back the one thing she was missing from her retail job — human connection. Posting on social media allows her to engage directly with customers and followers. “I’ve had people tell me,” she says, “‘Hey, that’s how I felt.’”

Relatability is at the heart of every canvas she touches. “We all go through things,” she says, adding that her work is “not just about the body — it’s about life.”

While McCoy now paints to support herself and her family, she still feels the tug that started it all, that urge to create. Even as exhausted parents to 3-year-old Phoenix and 1-year-old Penelope, McCoy and Scott reach for their work every day, painting in their living room while the kids nap. “We should probably nap and sleep,” McCoy laughs, “but we don’t do that because [our work] makes us happy and whole.”

She adds, “I would choose this life right now, this journey, over anything.”

As a woman who has struggled with insecurity throughout her life, painting has given McCoy a confidence she never expected.

It seems McCoy has finally found the answer. “If you go back through all my journals, there’s a lot of ‘just be,’ and I didn’t know what that looked like,” says McCoy. “And now I do from my art.”

Leaning into the essence of her being, she has stepped into her true self, an artist.

Learn more about Reneesha McCoy and see her work at rnwulf.com. 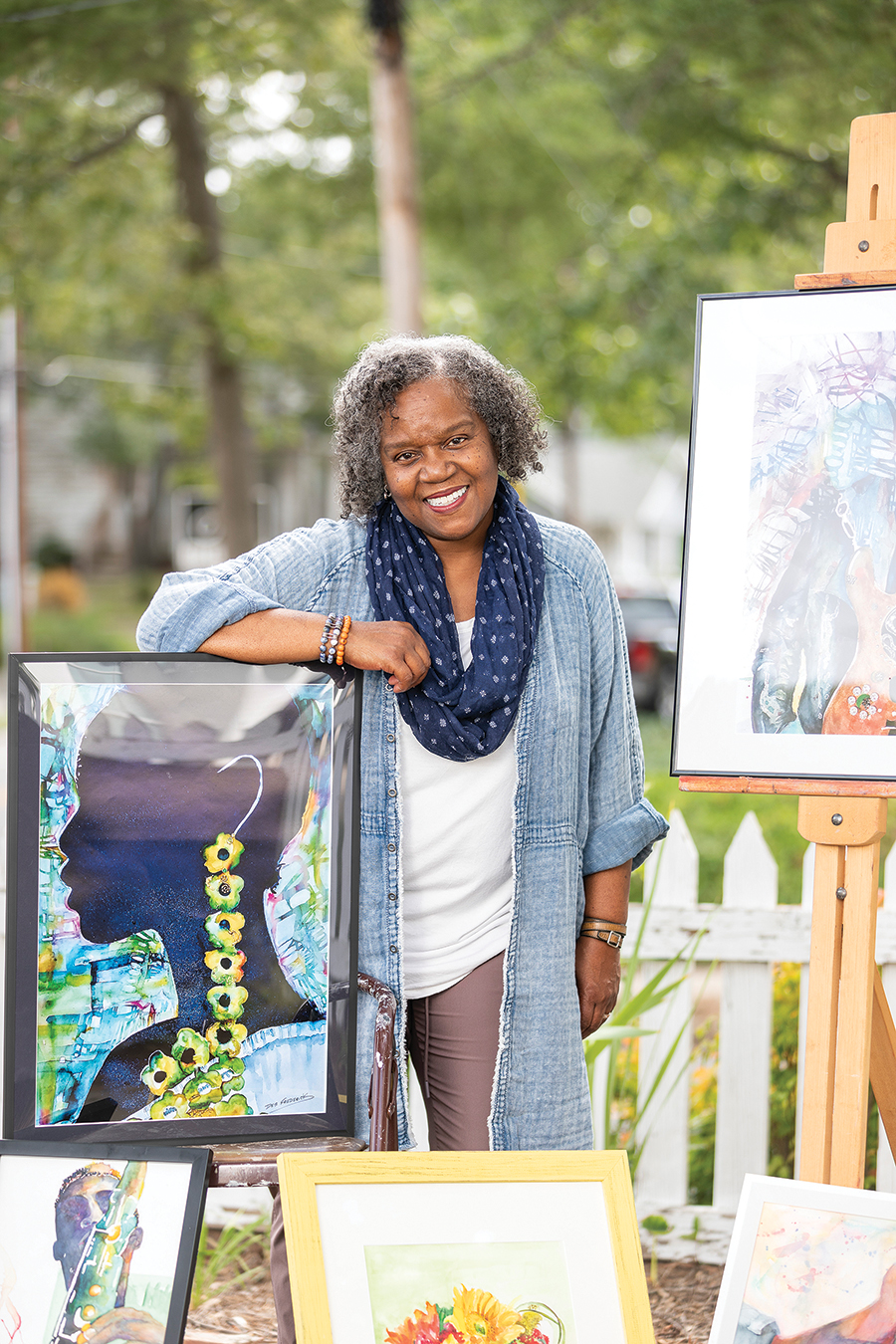 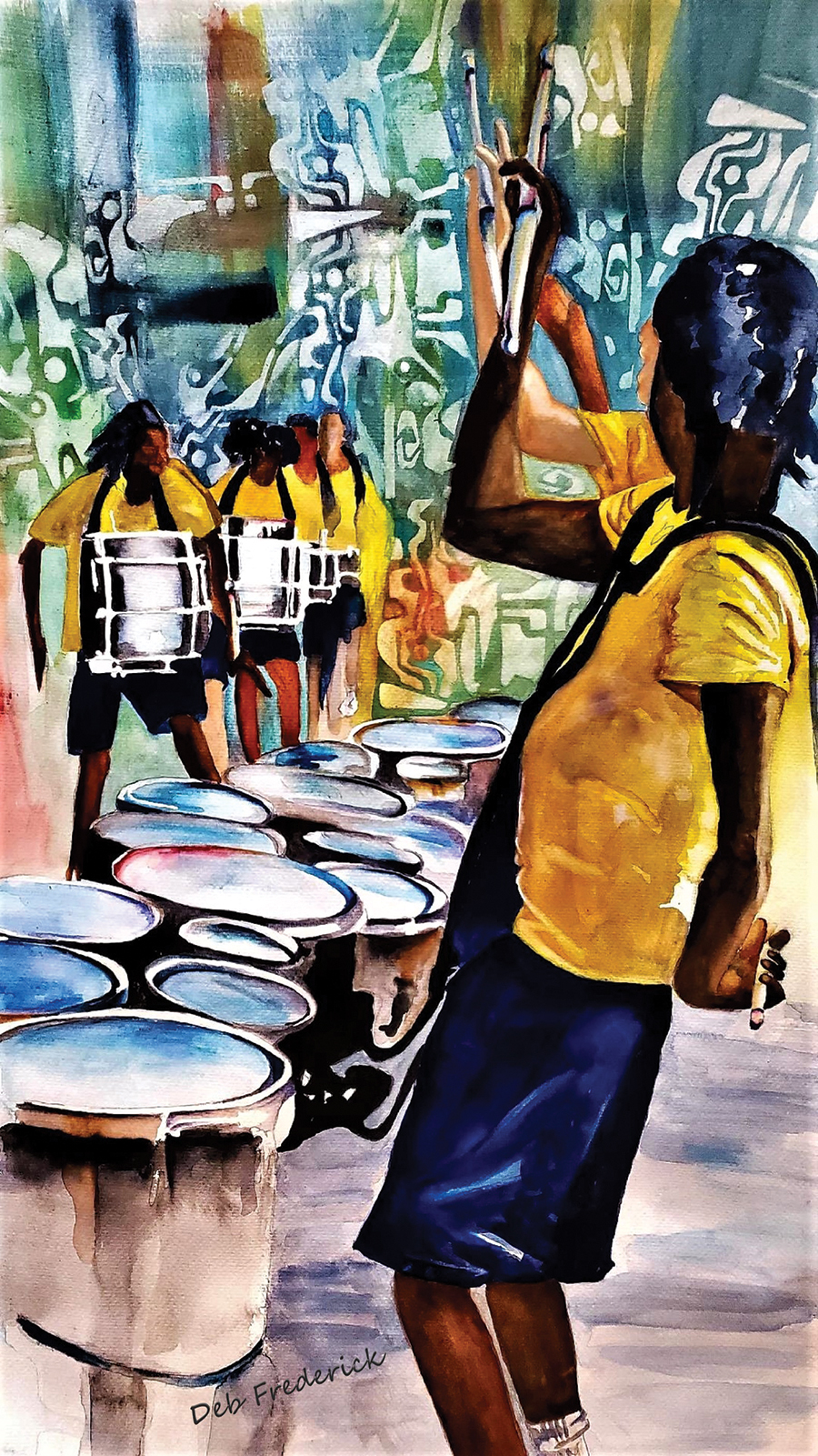 Petite in stature, Deb Frederick is a force when it comes to radiating high-vibe energy, her joy and lust for life obvious to anyone who meets her. It’s no wonder that her bold watercolor paintings reflect her vivacious spirit and love for music and culture.

As a child, Frederick discovered she had natural talent when she tried her hand at drawing “Winky,” a character on the back of a cereal box, for a contest — and won. “From then on,” she says, “my parents supported me and my art.”

Her sketches evolved into paintings and her paintings evolved into an exploration of lifestyle. In 1981, she earned her B.F.A. degree from the University of the Arts in Philadelphia. Marriage and children soon followed. While painting was her passion, Frederick decided to take a lucrative position with a textile company, noting that her “creative skills could be transferred to an industry where creativity is needed.”

Little did she know that her fashion design career would take off, allowing her to travel the world and discover new countries and cultures. Though it meant she wasn’t painting, as she says with a laugh, “I’m not mad about it.” 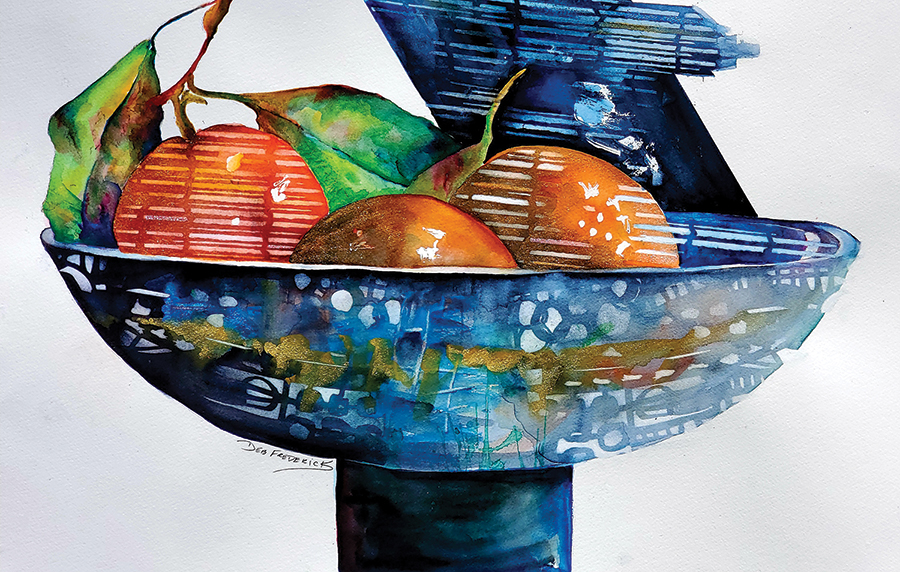 When the COVID pandemic struck in 2020, Frederick wasn’t surprised when she was laid off because, she suspects, of her age and salary. Her 35-plus year apparel design career came to an end, but — in typical Frederick fashion — she found joy in her situation. “It didn’t feel like I fell,” she notes. Shortly after, she picked up her paintbrush again.

“Safe,” a painting that she’ll never sell, was her way “back in” to the world of watercolors. Inspired by a moment caught between American Idol contestant Samantha Diaz and her grandmother, it features a beaming Diaz, locked in her grandmother’s tight embrace. Frederick, who was born in Panama but left the country as a small child, never met her own grandmothers. Imagining that their arms would have comforted her similarly, she painted with a heart full of love, noting that two heart shapes can be subtly made out in forms of the two figures.

Upon finishing “Safe,” she stood back in awe, whispering, “Did I do that? I forgot I could do that.”

Since then, Frederick has taken her brush to several sheets of watercolor paper, receiving praise from friends, family and the community, just as she did from her parents years ago. Recognizing that many children aren’t as fortunate, her hope is to mentor young people who “have the drive and desire,” but are lacking the “110 percent support” she had growing up. 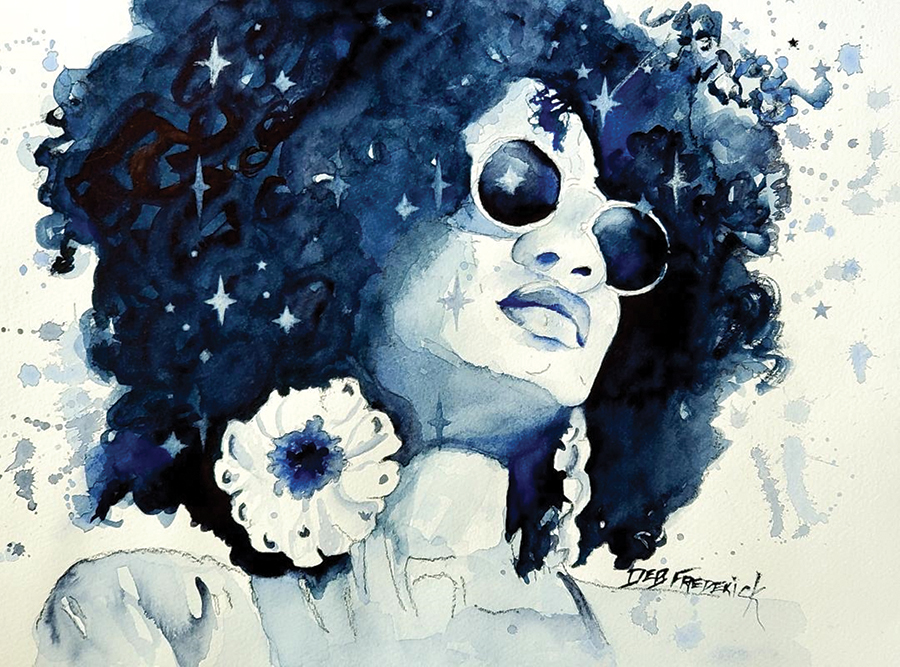 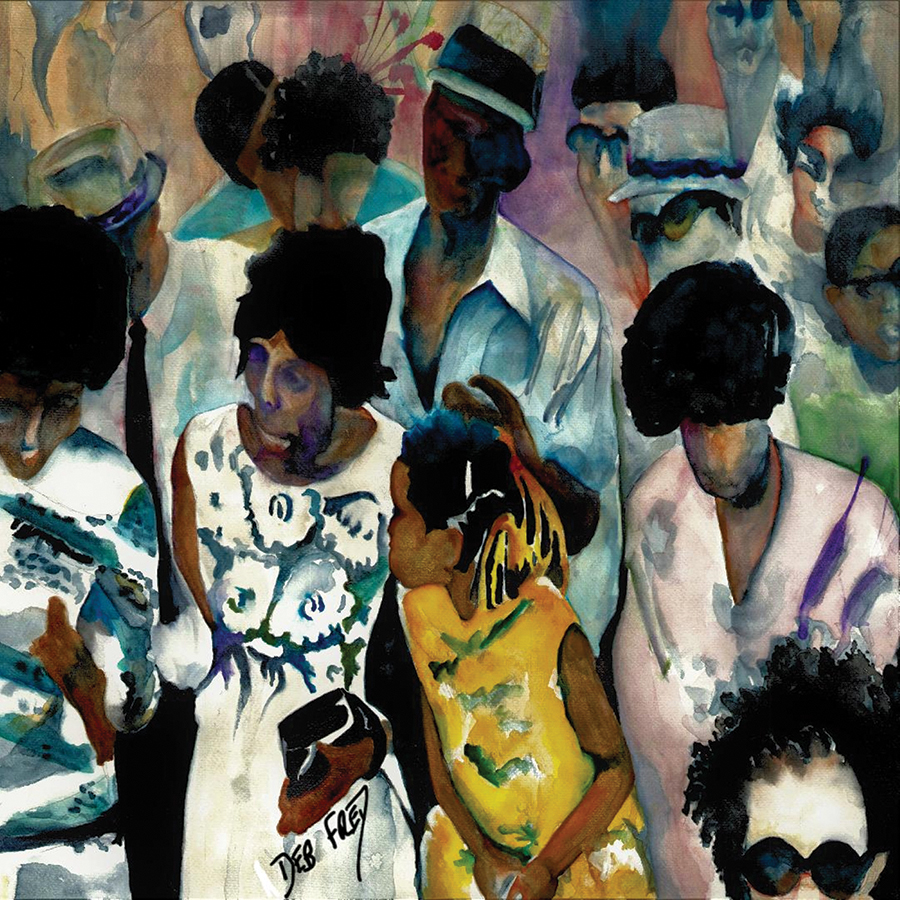 Frederick’s being sizzles with palpable enthusiasm when it comes to sharing her art, whether it’s through her own creations or teaching. “There’s so much more to discover,” she says, “and I’m excited about the journey.”

Learn more about Deb Frederick and see her work at debfredart.com. 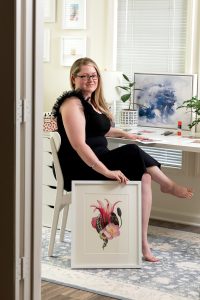 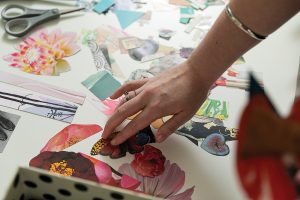 Jessica Dame | The therapy of flight

Nature is full of surprises. Take the wren, for example. A bit of an understated bird. That is, until you hear one sing. The same might be said of Jessica Dame. Shy and unassuming, the longtime librarian expresses herself in bold and surprising ways through her collage work, blending bright floral and avian imagery with the female figure, juxtaposing striking black ink with flirty colors.

In a world that’s dominated by digital collage, Dame, 36, appreciates the nostalgia of an art form that influenced the pop-culture scene throughout her ’90s youth. “Part of what makes [analog collage] therapeutic and great is that you’re getting away from the screen,” she says. “You’re doing something with your hands.” 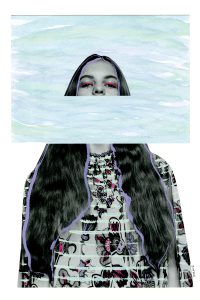 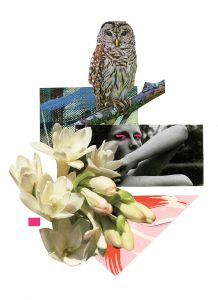 Dame notes with a laugh that from an early age she was collaging, illustrating and publishing her works. “My oldest memories,” she says, “are of making books about whales and unicorns when I was a kid.” Her love of imagery and books led her to earn a B.A. in art history from Christopher Newport University in Newport News, Va., as well as a Master’s in library science and information from the University of South Carolina.

In 2019, Dame uprooted her life, leaving her career behind to move to Greensboro from Columbia, South Carolina, with her partner, who had accepted a position at UNCG. New to the city and out of work when COVID entered the scene, she temporarily lost her mojo, but soon found her footing again. She told herself, “Don’t cover up the desire [to create] with chores,” finding time and space to reconnect to her art.

Like many in 2020, Dame discovered bird-watching, journaling what she saw. She’d always been infatuated by birds because “they’re so free and so elegant, so beautiful.”

Her most recent collages feature birds paired with florals, an underlying theme of blooming, something she seems to be doing herself. While nature has always been prevalent throughout her work, lately she’s been exploring the idea of transformation. “I don’t know why quite yet,” she says. “I’m seeking that through my art.”

A past piece features a female figure clothed in a black slip-dress, whose head is replaced by lotus blooms. “I was reading about the lotus flower and how they grow in mud,” says Dame. “They’re so pristine and beautiful, but can’t grow without that mud. It’s such a Zen metaphor for life.” 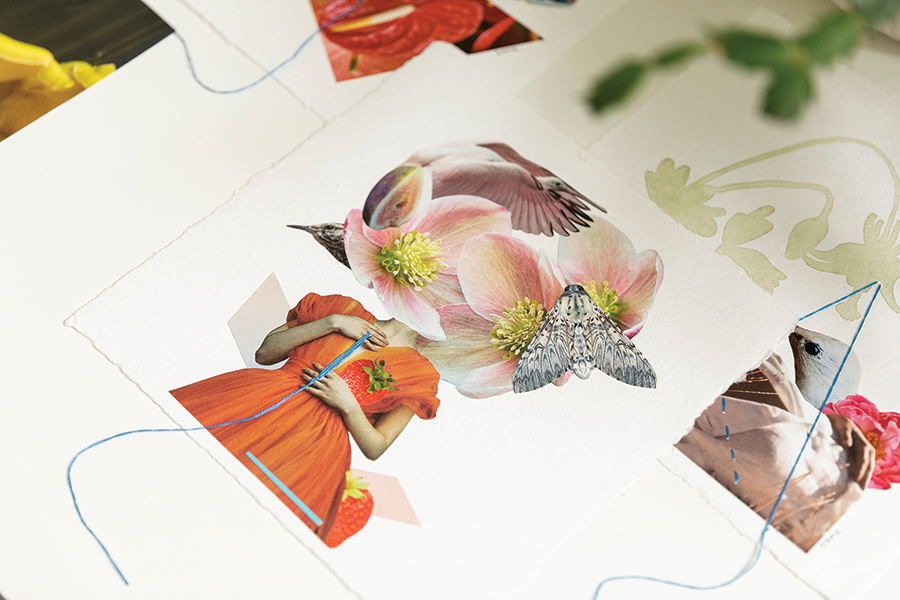 And, it seems, the sacred water lily is a perfect metaphor for Dame, who is flourishing creatively after a challenging stage of life.

What’s next for Dame? “Right now, just keep making stuff.” But it should be no surprise that this librarian-turned-artist’s ultimate dream is to see work on the cover of a book. OH

Learn more about Jessica Dame and see her work at jessicadame.com/collage.