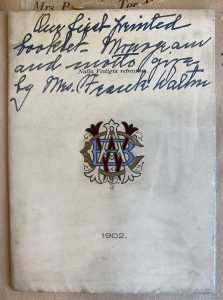 The year 1897 was a pretty big year in America.

Thomas Edison perfected his kinetograph camera, forerunner of the first film projector. William Faulkner and Amelia Earhart were born. Boston opened the first subway system in the nation, and the Library of Congress opened its doors to the public.

Here in Greensboro, a city fast approaching 25,000 in population, a dozen prominent Gate City women with names like Bynum, Mebane, Caldwell and Schenck formed the city’s second “study” club for discussion of literature, history and current events, adopting the practice of circulating timely books among its members with the aim of keeping abreast of the day’s key social issues, including the cause of women’s suffrage.

“Remember ladies,” club founder Mrs. Sterling Jones advised her colleagues, “the club comes first in your lives, and your husbands second, and never the twain shall meet!”

Initially, meeting every fortnight at the home of a member — many of whom, in those fleeting days of the horse and buggy, conveniently resided along North Elm Street — on Wednesday afternoons at 3 p.m., the members soon voted to change its name to the Wednesday Afternoon Book Club.

And so it remains to this day — 125 years after the city’s second book club was born.

“It really has had a remarkable history,” notes longtime club secretary and incoming president, Chris Garton, “attracting women of the city who had a great interest in improving their minds and the quality of life in Greensboro.”

Garton notes that the WABC was one of the early benefactors of the city’s first public library, which opened its doors in 1911, donating research books and other titles from the club’s own library, along with significant funds collected directly from its members.

As the 20th century dawned, membership rose to 16. At that time, member Mrs. Frank Dalton presented the club with a handsome monogram and fitting motto: “Nulla Vestigia Retrorsum” (“No retreat/We never go backwards”). Club members studied in depth the works of Shakespeare and Jonson, and printed their first booklet on the history of North Carolina.

Club members also sponsored popular monthly lectures by prominent speakers at the original downtown O.Henry Hotel and wrote papers on a range of timely subjects — travel, war, literary biography, poetry and local history were major themes — to share with fellow members at their regular Wednesday afternoon gatherings that ran from May to October annually.

“Whatever the topic, these women took a deep dive into their subjects,” says Garton. “It’s amazing what these women lived through. So much was happening in America then — World War I and lots of social change. During the Second World War, club members worked at the Red Cross and presented programs on rationing, a timely subject for everyone.”

Today, the Wednesday Afternoon Book Club presents only four or five programs a year, but the spirit of the organization’s fellowship is very much alive among its 27 active members. During the COVID shutdown, members were forced to meet via Zoom but continued paying dues, which led to a significant donation this past spring to the Greensboro Bound literary festival and a return of in-person readings in honor of the club’s 125th anniversary.

“We like to say that we’re putting the ‘book’ back in book club,” quips Chris Garton. “Because we have refocused on books that speak to the moment and interest of our members. At heart, though, it is really about the friendship we share — along with good books — that matters most.”

“I have belonged to so many organizations in my long lifetime,” early club historian Louise Meyers once wrote. “But none with a sweeter spirit than our club.”  OH