Spring is the most ephemeral time of the year, so it pays to cook completely in the moment

Asparagus season is in full swing, and a good thing, too, for the vegetable is one of the home cook’s greatest allies. It can be steamed, boiled, sautéed, stir-fried, roasted or grilled. It comes elegantly thin or fat and juicy. It’s impressive drizzled with vinaigrette, and served as a first course; as a side to chicken, fish, ham, pork, or beef; or worked into pasta primavera, risotto, or an omelet or frittata. It is delicious hot, chilled or room temperature. It swings from simple, even austere, presentations (salt, pepper, olive oil, lemon zest) to more complex ones (in a stir-fry with other spring vegetables, for instance, or tucked into a creamy lasagne) without losing its presence.

And even though it is now found in the supermarket produce aisle pretty much year-round, most of us greet our local crop as something special, eating it with joyous, unabashed greed for the four to six weeks it is available. That is why it’s a good idea to buy plenty; I usually allot at least a half pound or more per person. On the off chance there are any leftovers, they’re delicious the next morning, warmed through and dipped into a runny soft-boiled egg.

Some people prefer pencil-thin spears, and others like them thick. The difference in circumference is due not to the relative maturity of the spears, but a combination of factors, including the age of the plants from which they were harvested (the thinner the spear, the younger the plant), cultivar and sex. Female plants produce fewer, larger spears; males give a much higher yield of thin to medium spears.

I tend to seek out asparagus that’s on the plump side because of its succulent, almost meaty, texture. I also find it easier to deal with. Skinny asparagus may look sophisticated on the plate, but during cooking, it can turn from tender to mushy in about a millisecond, and attention must be paid.

All that aside, go for whatever asparagus, whether thick or thin, is the freshest, because it doesn’t keep well. Look for firm, tightly closed tips with a beguiling lavender blush, scales (or leaves, botanically speaking) that lie flat against glossy stalks, and woody ends that are freshly cut and moist. The asparagus in our markets is typically green, but purple cultivars are becoming increasingly available; those are especially nice raw in salads, because when cooked they lose their color, which can range from pale mauve to deep purple. The white asparagus that is more common in Europe is simply prevented from turning green: The growing spears are continually banked with soil to keep them in the dark; that way, they don’t produce chlorophyll.

Cooking asparagus is staggeringly simple, and my basic method is as follows. First, rinse the asparagus well to remove any sand or grit (trust me, it’s there) and pat dry. Snap off the tough ends (or cut them if the spears are very thick), and peel the stalks if the skin is fibrous.

In a large skillet, lay the asparagus lengthwise, tips facing in the same direction, in an inch or so of salted water. Bring the water to a gentle boil and cook the asparagus until it is barely tender; the tip of a knife inserted in a spear should meet a very slight resistance, and if you pick it up in the middle with tongs, it should bend slightly. Thin spears take just a few minutes and more robust spears a bit longer. Once you’ve prepared asparagus this way, you can go in any number of directions. Below are two favorites.

A Homey Asparagus Supper for Two

I cobbled together this dish one rainy spring evening a few years ago, and was really proud of myself — until I realized the revered English food writer Nigel Slater had beat me to the punch. “A rubble of cooked, chopped pancetta, and especially its melted fat, makes a gorgeous seasoning for a fat bunch of spears,” he wrote in Tender: A cook and his vegetable patch. And how.

Preheat the oven to 400°F. Using the basic method outlined above, cook a bundle of medium to large asparagus until just barely tender. Meanwhile, melt a generous tablespoon of unsalted butter in an ovenproof skillet or sauté pan over moderately high heat. Add an enjoyable amount of chopped pancetta or bacon and cook until golden. Remove from the heat.

This recipe, which can easily be doubled, is a wonderful way to kick-start a dinner party. The asparagus is delicious warm or at room temperature, and the sieved hard-boiled egg is more than a pretty topping: As it absorbs the vinaigrette, it fluffs up like the yellow mimosa blossoms that punctuate winter in Provence. The richness of the egg yolk also gentles the vinaigrette and gives it body.

Cook about 1 1/2 pounds asparagus as above. Cut 2 hard-boiled eggs in half, then press them through a sieve into a small bowl. Whisk together about 2 tablespoons white wine vinegar, 1 tablespoon minced shallot, and a dab of smooth Dijon mustard. (A little minced fresh tarragon would be nice, too.) Add coarse salt and freshly ground black pepper to taste. Whisk in 1/3 cup extra-virgin olive oil (use a mild oil, not a peppery Tuscan one). Toss the asparagus in a small amount of the vinaigrette, and reserve the rest. Parcel out the asparagus among four plates, spoon the rest of the vinaigrette over it, and sprinkle with the sieved egg. Et voilà!

Asparagus on the Grill

By the time May rolls around, we all want to spend as much time as possible outdoors, not standing over a stove. Luckily for us, the technique of grilling really concentrates the singular sweetness of asparagus and overlays its vegetal purity with a little smokiness. Grilled asparagus is delicious as is or with a garlicky mayonnaise.

“When you put just-picked asparagus on a hot grill, they are so juicy they actually jump as they start to cook,” Andrea Reusing once told me. The acclaimed chef-owner of Lantern, in Chapel Hill, and the restaurant at The Durham hotel, in downtown Durham, is extremely deft with seasonal ingredients, and the below recipe is from her book, Cooking in the Moment.

Prepare a hot fire in a charcoal grill. Count on
8 to 10 asparagus per person as a side dish or as
the focal point of a salad. Keeping all the tips pointing the same direction, toss the asparagus with olive oil, a generous amount of salt, and some freshly ground black pepper. When the flame has died down, the coals are completely covered with ash, and the grill is very hot, grill the asparagus
(in batches if necessary). Cook 2 to 3 minutes per side until fragrant, lightly marked, and vibrant green on the outside, and juicy and tender on the inside.  OH

Jane Lear was the senior articles editor at Gourmet and features director at Martha Stewart Living. 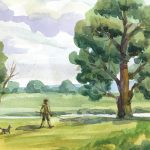 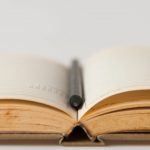