Seventy-five years ago this year, the United States and our Allies emerged victorious in both the Japanese and German theaters of war, marking the end of a senseless conflagration that upended an entire world.

Photo-illustrator Joe Bemis has spent his entire professional career composing meticulously detailed pictorial recreations of scenes from America’s past wars, from the Revolution to Vietnam, with a special emphasis on the Second World War. Authenticity is everything. “Every little detail of the photo has to be period correct,” Bemis insists. “I try my best and ask a lot of living historians and re-enactors for advice.” Between his research and theirs, he usually gets it right. 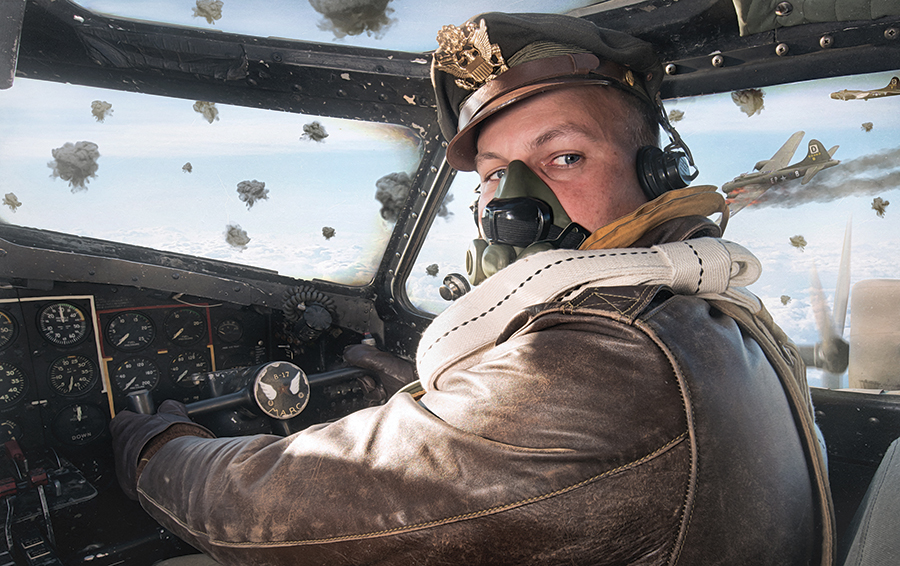 “To preserve and educate,” Bemis replies when asked why he goes to such lengths to capture bygone eras. “We have to preserve the memories of our veterans and the experiences they went through. And we also have to teach new generations about the sacrifices that they were willing to go through to preserve our democracy.”

He travels the world photographing organized re-enactments of famous military campaigns as well as staging his own Victory Weekends where family, friends, war re-enactors, makeup artists and assistants breathe new life into long ago, far-away conflicts. 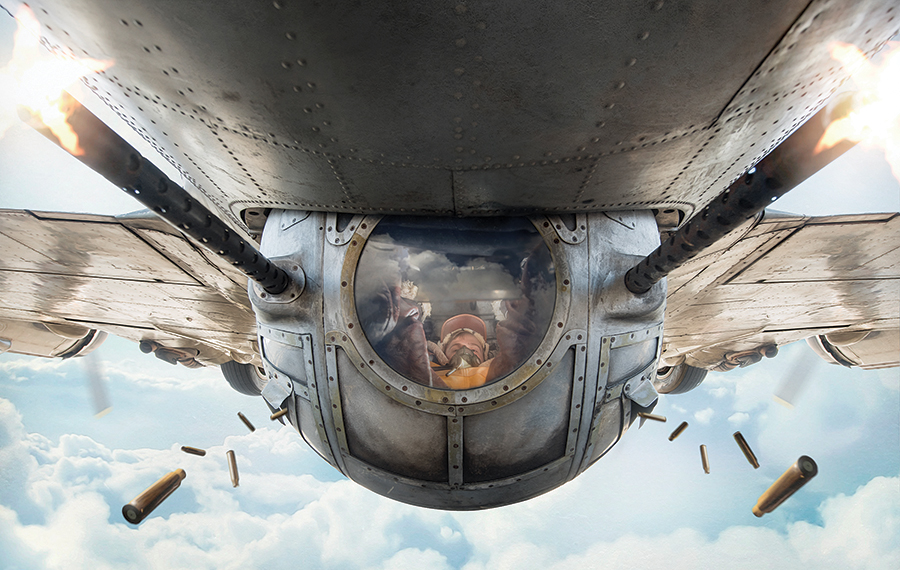 “You have different types of re-enacts,” Bemis explains. “Tactical, which is going through maneuvers, camping, stuff like that. Or you have living history events that the public is allowed to attend, at a historic site or an airshow.” He goes on to say that there are also total immersion re-enactments “where you can’t have anything at all that’s modern.” Those events last for days, no one is allowed to go to their cars or make phone calls. “You’re in character for three or four days. I haven’t even made it to one of those because everyone and everything has to be completely authentic. There are people who shoot with period cameras but I’m not one of them. I’ve gotten used to the modern digital aspect of the art.” 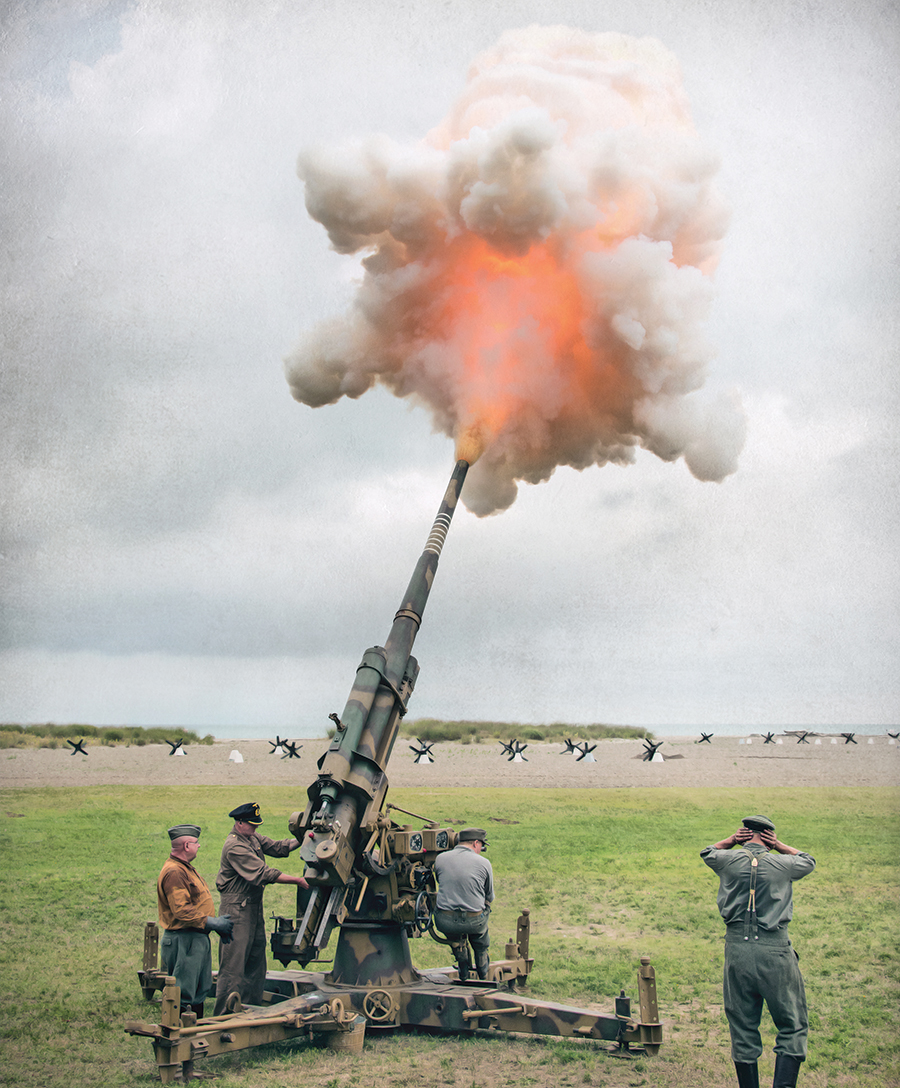 At Toccoa, Ga., he recently photographed a reenactment of 101st Airborne paratroopers training for battle, as depicted in the HBO miniseries Band of Brothers, based on Stephen Ambrose’s book by the same name. “I actually got to meet [Jim] “Pee Wee” Martin, one of the last surviving members of the 504th who trained at Camp Toccoa. Martin was in charge of a training exercise called Currahee, where recruits, among other skills, had to run 3 miles up a mountain and three miles back down. “You had to be able to run that mountain in 55 minutes, full gear,” he recalls. “We ran Currahee and it almost killed me. But I’m not 18 so . . .”

Warbirds Over Monroe Air Show in Monroe, North Carolina, is where the photo of 101st and 82nd Airborne paratroopers getting a lift in a Jeep was shot. “That’s Eric Kalamaja at the wheel,” Bemis explains. “He’s 101st Airborne retired and does that re-enactment every year. That guy is hardcore, he rebuilds military Jeeps in his spare time and sells them.” 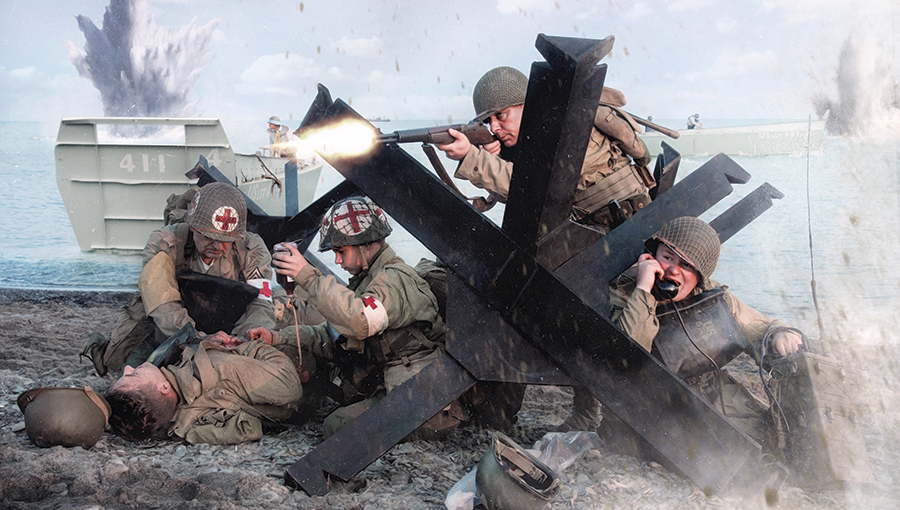 This collection also contains photos taken at “D-Day Conneaut” in Ohio, a yearly, four-day long re-enactment of the Allies landing at Normandy. “I was one of the few photographers that got to shoot the landing craft,” Bemis says. “The Higgins boats in the background and the explosions I added in Photoshop.”

As exciting as these off-site experiences can be, there’s nothing like on-scene re-enactments. Naturally, Bemis and his Victory team were present on June 6, 2019, for the 75th anniversary celebration of D-Day held at Normandy, France, where nearly 160,000 Allied service members embarked in Operation Overlord back in 1944. It was the largest military invasion in history, which, at a great human cost, would prove to be the decisive engagement leading to the end of World War II just one year later. 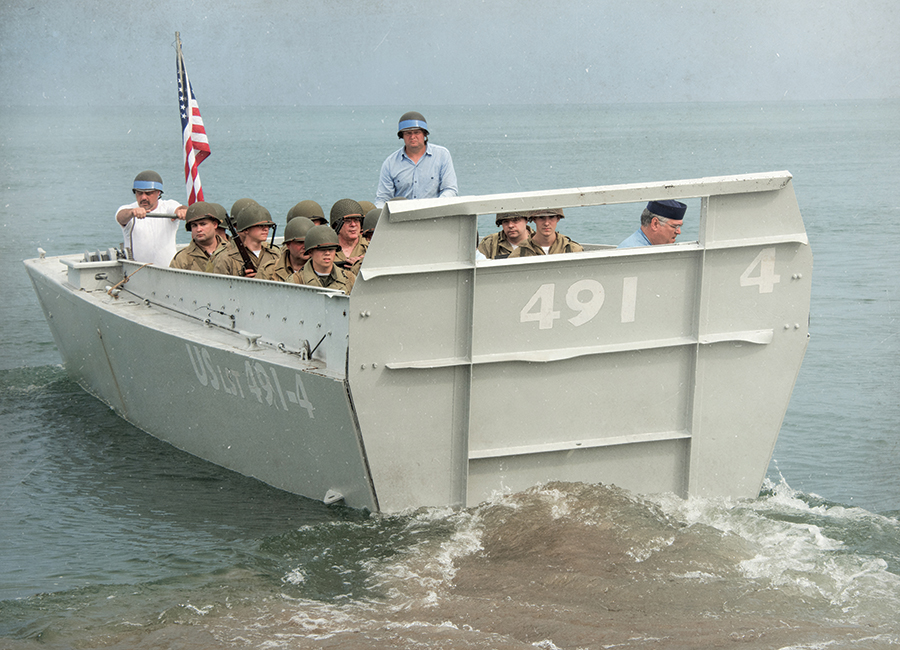 He recalls the morning of June 6, 2019: “I was on Utah Beach when the sun came up at 6 in the morning on the 6th,” Bemis recalls with pride. “The same moment, 75 years prior, those troops were landing on the beach.”

That’s when he took the shot of a GI’s helmet lying on the early morning beach at Normandy, an iconic image seen in the motion picture The Longest Day. “Everybody’s attempted that shot but I did it a little differently just to make it my own. I’d always dreamed of being there and capturing that photograph.” 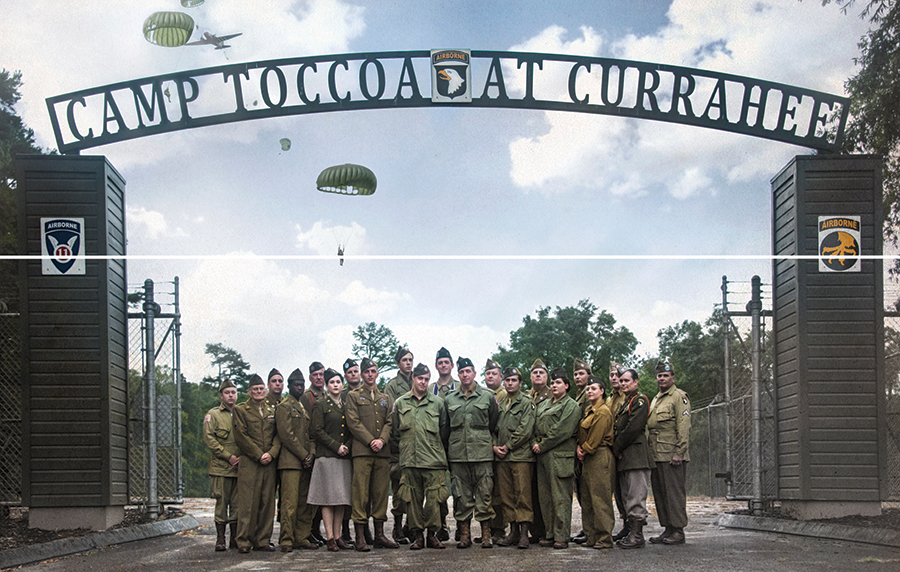 Bemis watched in awe as a dozen Douglas C-47 Skytrains roared overhead, releasing paratroopers over actual D-Day drop zones as they had 75 years ago. “Nobody had parachuted into these historic drop zones since then,” he notes. Heading the formation was the original C-47 that led the assault in 1944, “The entire sky was nothing but paratroopers, there’s no Photoshopping in that picture, that’s the way it looked.”

He staged a shot of Sherman tanks at Normandy, “But none of the Shermans made it to the beach on that first day,” Bemis tells me. “They weren’t counting on rough seas in the channel, so pretty much every tank that came off the delivery ships sank. They’re all still down there in the channel; you can actually go and dive on them.” 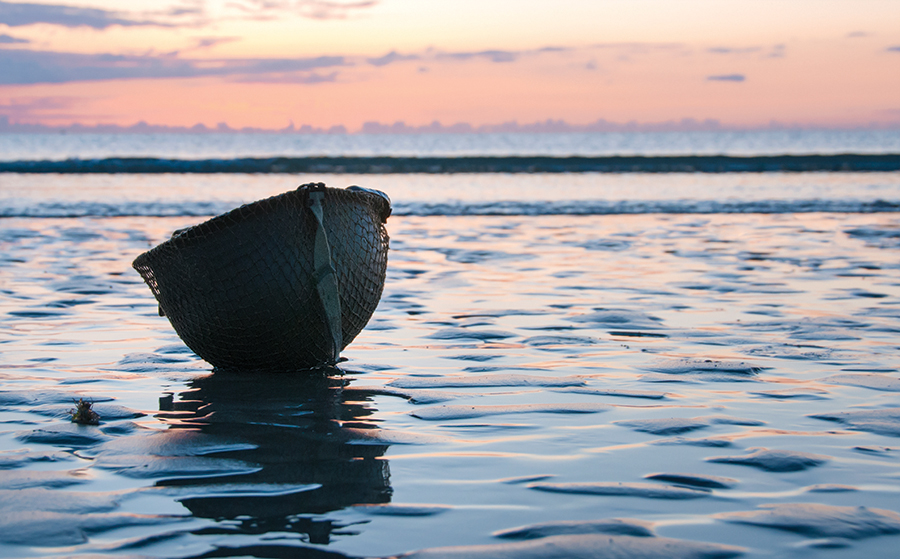 While in the town of Sainte-Mère-Église, Bemis describes one of the most beautiful sounds he’s ever heard: “A column of Sherman tanks, half-tracks and armored vehicles I’d only seen in museums.” The lead tank is the one used in the movie Fury starring Brad Pitt. “I was in shock, I was really excited taking photos, looking, watching, smelling. One of the soldiers pointed me out saying, ‘C’mon up.’ So I got to sit on one of the Sherman tanks while it was moving through town. With crowds of people all around us, it looked like the town was being liberated all over again.” 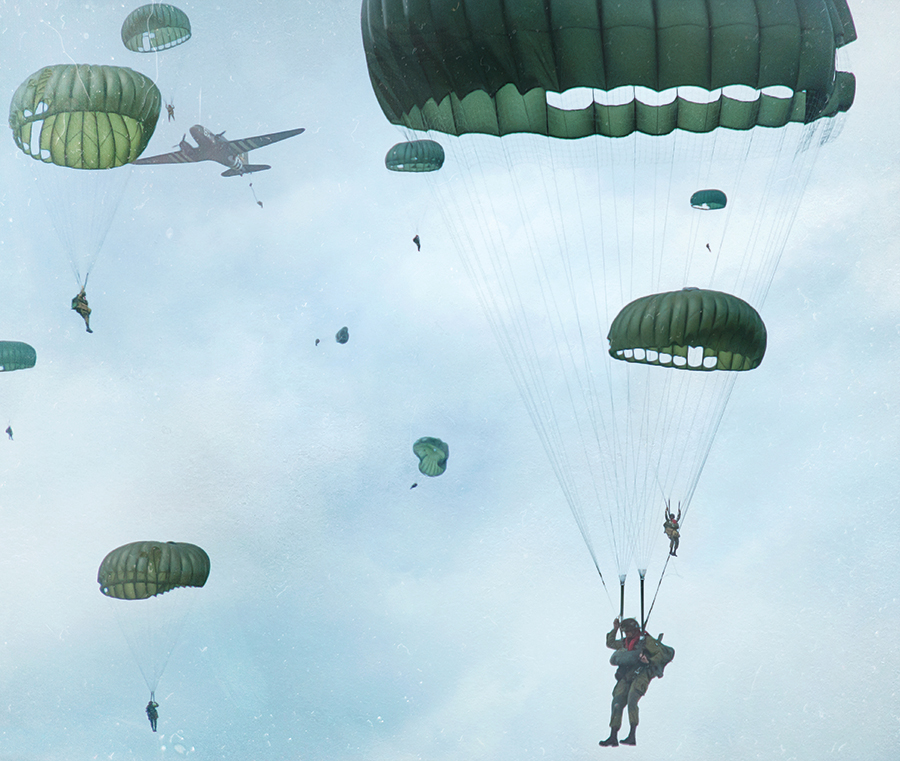 As for the picture taken at Mulberry harbour of an older gentleman staring off into space, reminiscing no doubt about what he witnessed 75 years earlier as part of the first wave to hit Gold Beach on June 6th: “We were leaving when I saw him just sitting there,” Bemis says. “At the time I didn’t know who he was, what got my attention were all the medals hanging on his jacket.” While snapping a few shots, out of nowhere, the former Sapper with the Royal Engineers was surrounded by reporters and TV crews. “This was actually a combination of three shots because those guys ran in front of me while I was shooting.” After returning home, Bemis just happened to see an interview with the fellow, Harry Billinge. “He’s all over the place right now. When he was 94 he was knighted by the Queen, he turned 100 this year so he was 99 in that picture.” 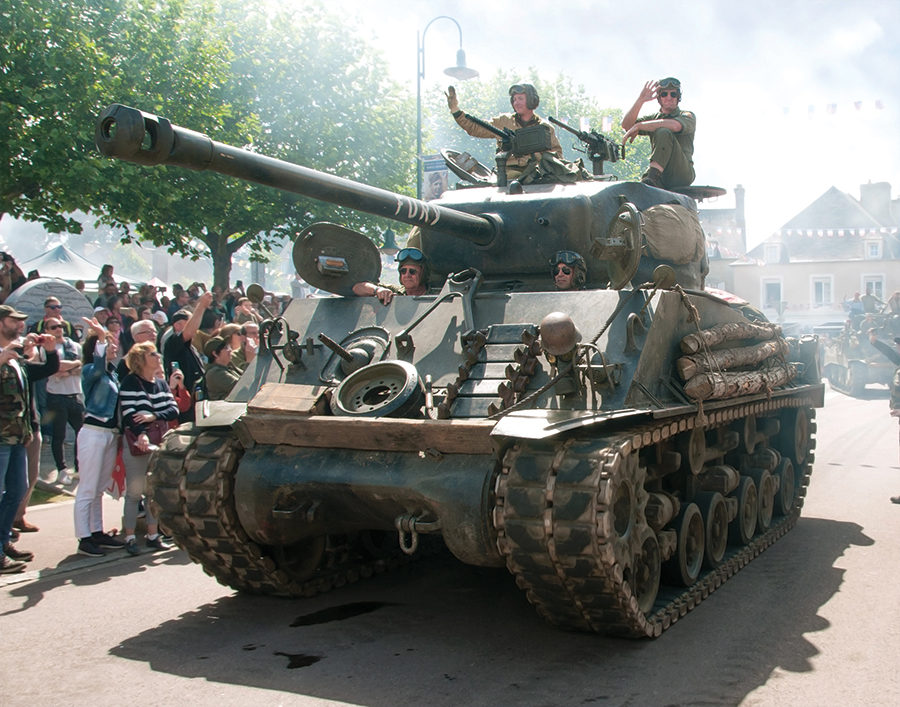 Admittedly somewhat jaded after decades behind the camera documenting life during wartime, Bemis says, “When I first started going to these events I’d show up and say, ‘Oh my God, three Jeeps, a C-47, a P-51!’ Now I’m like, ‘What do you mean you don’t have two tanks?’” 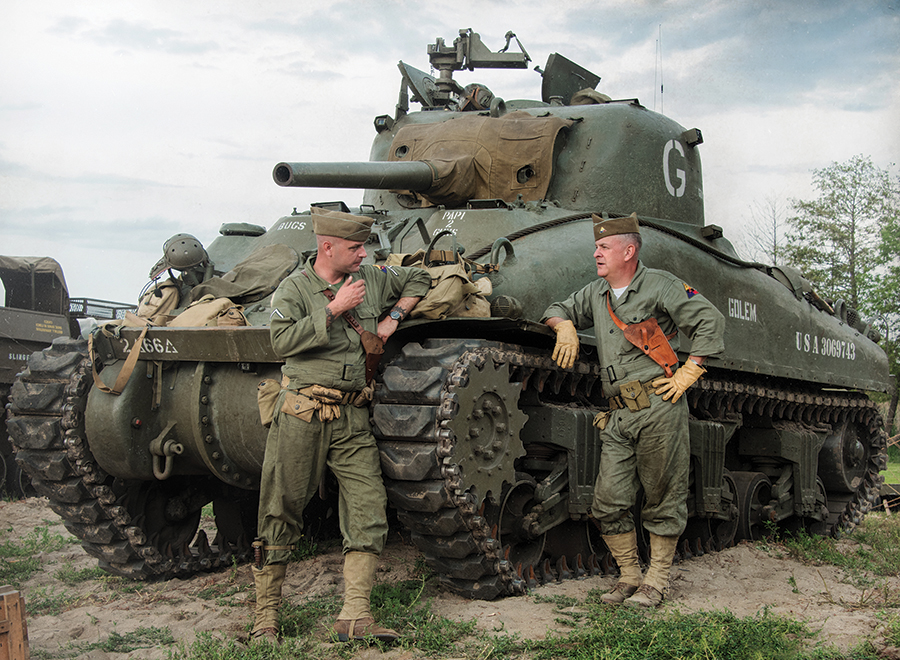 he latest from Joe Bemis and Victory Productions? “There’s a big event in September,” he said last summer. “‘Road to Rome’ will have some 200 participants with tanks, half-tracks and equipment in a reimagining of the Italian campaigns from 1943–1945 staged at Enfield, N.C. The organizers have set up separate Allied and Axis Facebook pages so, if you’re a German re-enactor, for instance, you can’t go to the GI page to see what they’re doing.” 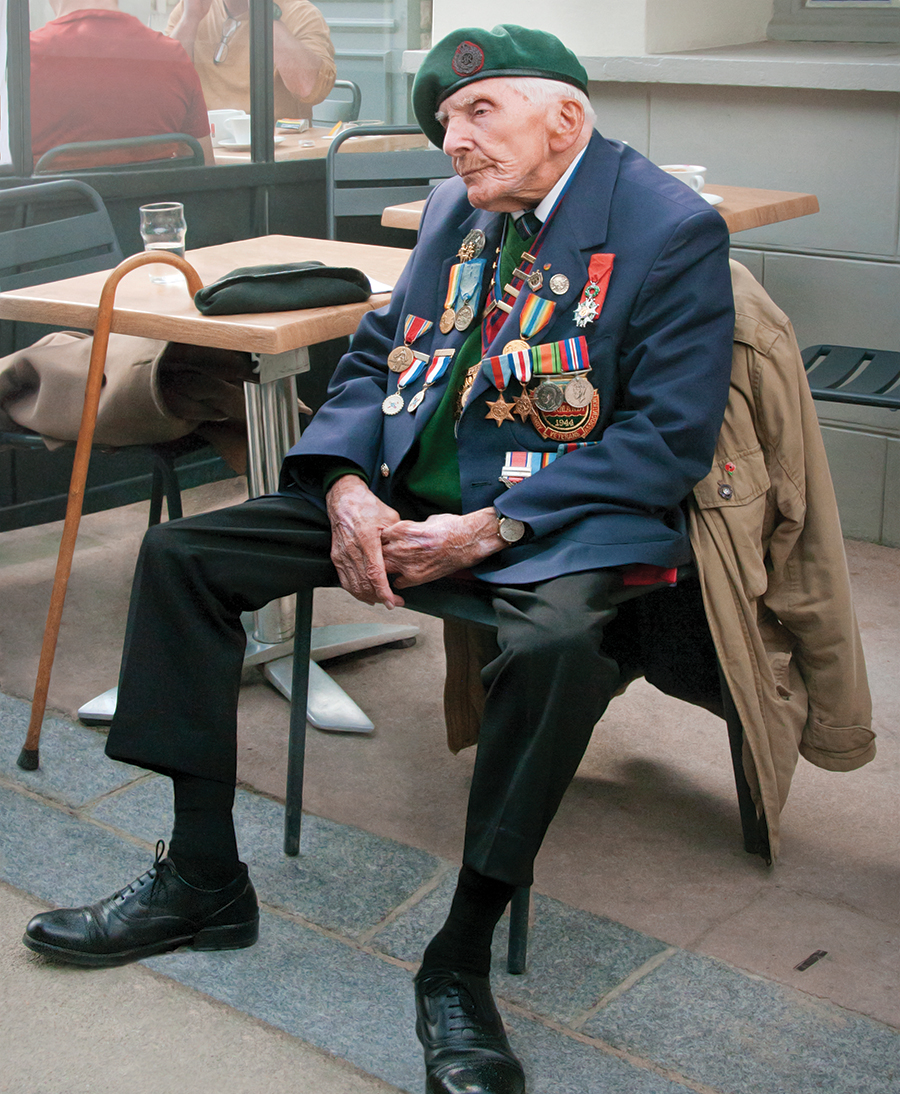 Imagine how much faster the Allies could have won the war if only we could have peeked at Hitler’s Facebook page or intercepted his tweets.  OH

Joe Bemis shot many of these images in collaboration with Patrice Wessling. You can purchase prints of these photos and other American combat depictions at vforvictory.us.