Marie Stone-van Vuuren colors her art with realism and wit 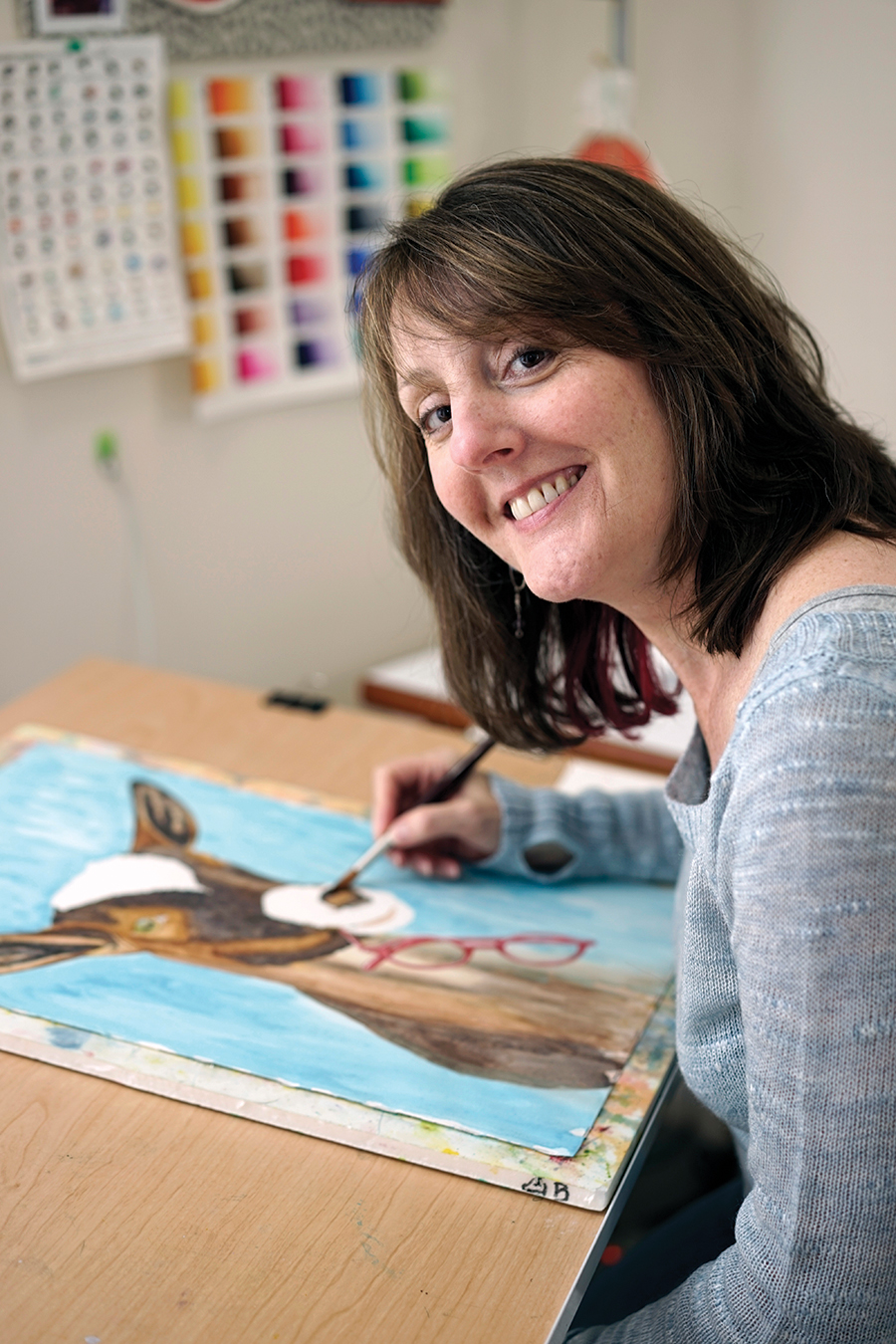 How would a crow hold a cup of tea?

Set aside, for a moment, the larger question of why a crow would hold a cup of tea.

Right now, it’s enough to know that Greensboro artist Marie Stone-van Vuuren was determined to figure out how.

She studied pictures of crows’ feet.

Real crows’ feet, not the kind women are supposed to care about. 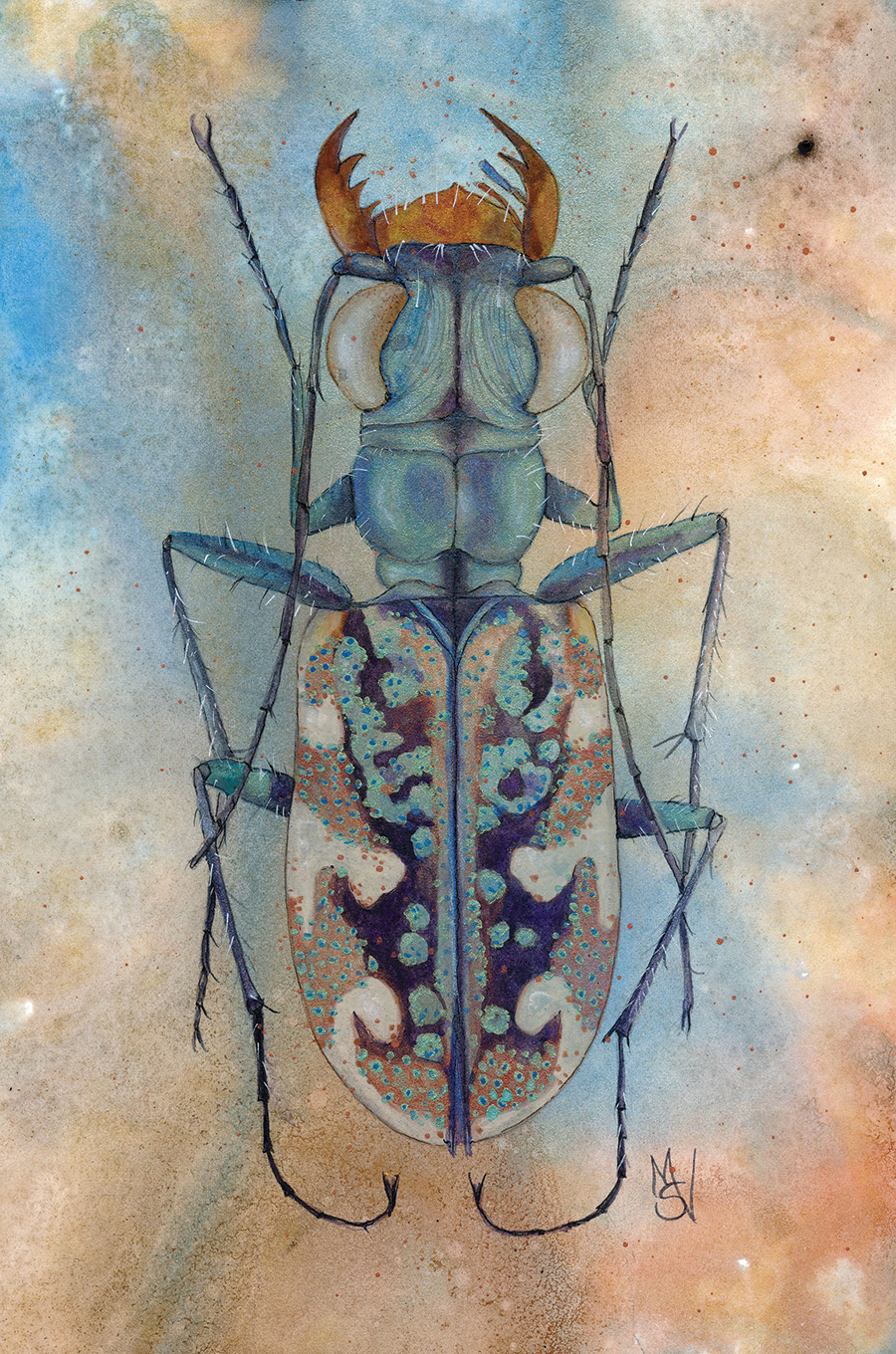 She took modeling clay, rolled out four knobby bird toes — three in front, one aft — and wrapped them around the handle of an earthenware mug until she knew exactly how a crow would latch on.

Which brings us back to the question of why a crow would do such a thing.

Answer: Because Stone-van Vuuren wanted it to.

Because she lives in a neighborhood full of crows, and they’re always in her visual field, pecking and cawing at her imagination.

Because the idea struck her as funny and absurd — a lowly crow taking a spot of tea, just as a distinguished Brit might. 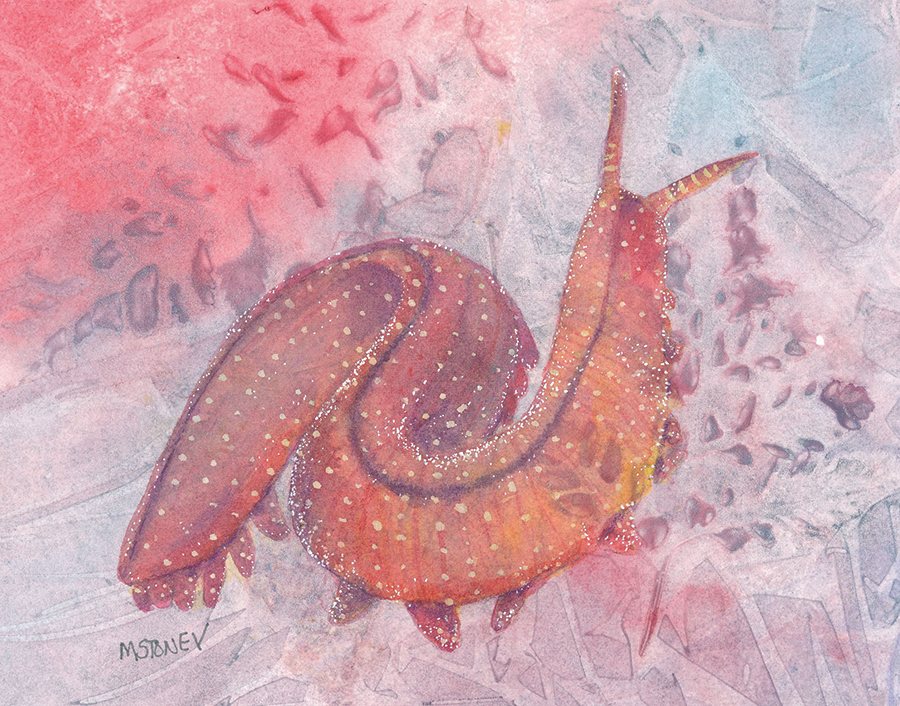 When you look at it that way — and understand that one of Stone-van Vuuren’s favorite books is Young Years: Best Loved Stories and Poems for Little Children, an illustrated volume from 1960 — it seems inevitable that she would take up watercolor and ink to create three crows standing shoulder to shoulder, thinking crow-ish thoughts, while one pauses for refreshment.

Crow Takes Tea is one of her most popular pieces, in terms of affection and sales.

Which is nice, but not necessary.

What’s necessary is for Stone-van Vuuren to be delighted by her work.

“I’m not the kind of artist who likes edgy, dark, crude subjects,” she says, brushing off the notion that heavyweight art rests on heavy subjects. 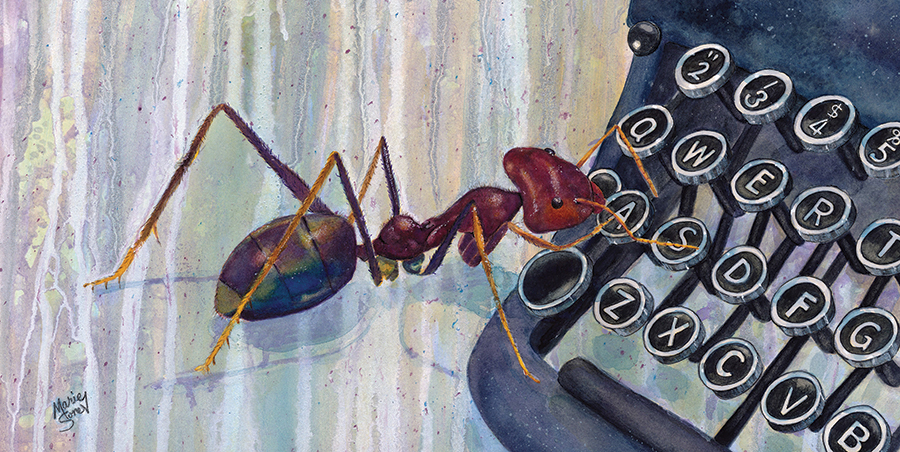 “Maybe it’s academia that puts that idea out there. I don’t know. But it doesn’t leave room for the silly, the delightful, the fanciful,” she says. “I just want to be a lighter person.”

Growing up in Detroit in the 1960s and 1970s, Stone-van Vuuren endured enough trauma to last a lifetime.

Her home was burglarized. Two friends were shot. She lived with domestic violence and alcoholism. Her congenital hip dysplasia required five surgeries.

“I was bullied and teased because I walked funny,” she says.

Art was a refuge. In high school, she drew portraits of musician Frank Zappa and taped them inside her locker. She decorated the chalkware lamps and statuary that her parents fabricated in their shop in Hamtramck, a blue-collar appendage of the Motor City. Her father showed her how to create faux surfaces, a skill that shows up in her work today.

“He taught me how to marble and do some weird effects,” she says.

When Stone-van Vuuren was 19, her parents moved to High Point to be near the furniture industry. She followed later, typing and organizing her way through administrative jobs at United Guaranty, the Greensboro Jaycees and the Center for Creative Leadership.

She crossed departmental lines at CCL.

“I went from administrative work to IT because I was really good with computers. I was on the help desk for a while, then I got into project management, and they were like, ‘Ooo, you can do graphic design,’ so I did more and more of that,” she says.

When a career counselor suggested that she get a bachelor’s degree, Stone-van Vuuren became a contractor to CCL and enrolled at Guilford College, at age 35, to study music. 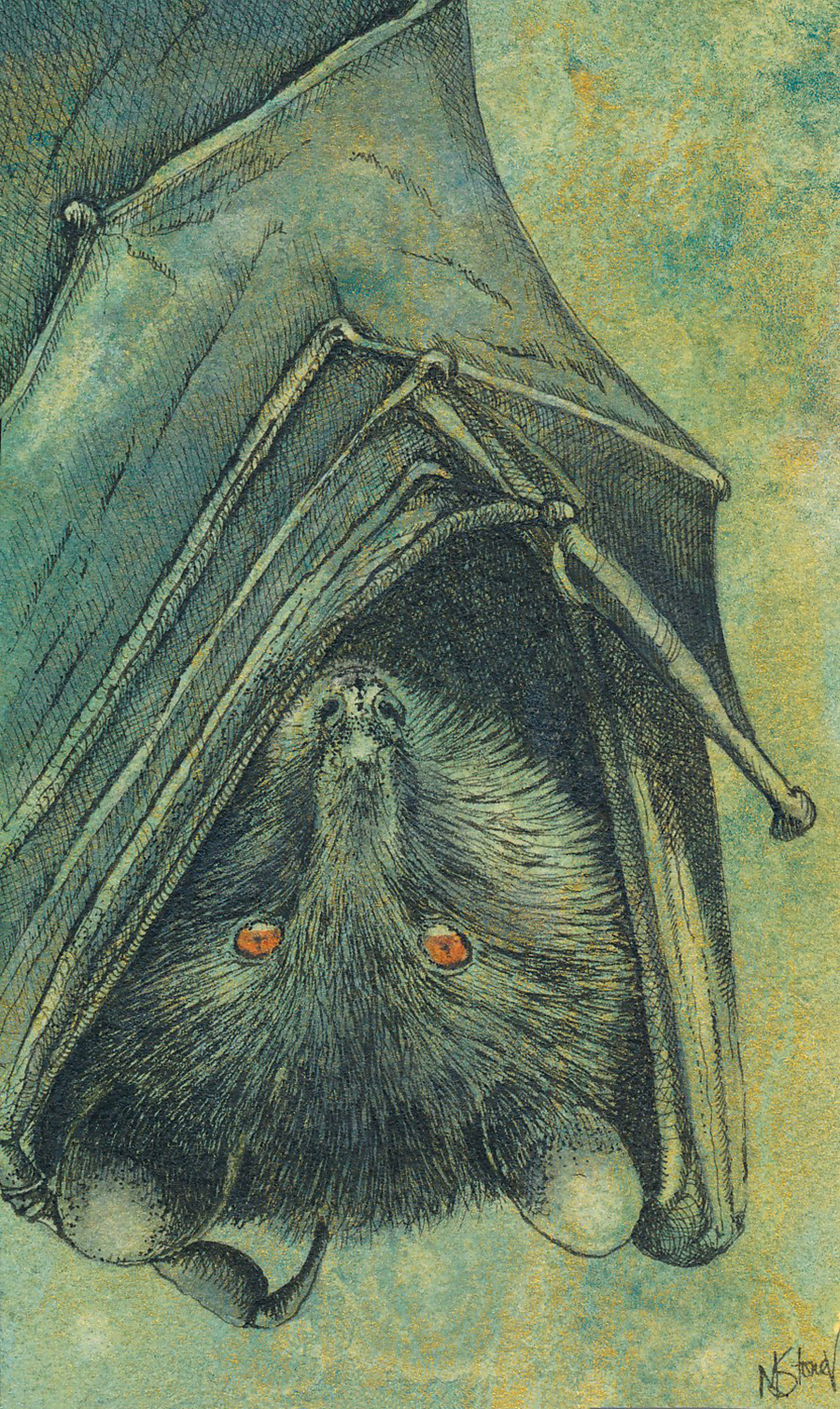 But even with a degree — she taught classical guitar for a few years after graduating — music never came as easily as graphic design.

Visual art became her mainstay. She set two tracks for herself: a practical path for money and a whimsical path for joy.

As a freelance designer and project manager, she took — and continues to take — jobs from a variety of clients. She draws business logos, devises fundraising campaigns, illustrates books, paints pet portraits and renders site plans and buildings for developers.

“I married my love of art with my business savvy,” she says. “I found a way to join those two things. It’s like a Reese’s Cup, you know?”

For pleasure, she picks up a brush and turns her imagination loose — a practice she considers vital to her growth.

“When you get into the people-pleasing stuff, your art is on a slippery slope,” she says.

Stone-van Vuuren spends many happy hours in her home studio, spilling watercolors, ink and mica onto paper to create dreamy backgrounds. She might add reactive agents, such as salt or alcohol. Sometimes, she prints her abstract broths with leaves, grasses or other textured material.

To reveal pockets of chromatic energy, she snips the dried paper into card-size pieces. If a foreground figure suggests itself, she coaxes it out with ink or watercolor.

Other times, starting with a subject in mind, she sketches an image on paper, paints the shape with a rubberized masking fluid then drizzles color over the resist. When the background dries, she peels off the coating and fills in the blanks with her characters.

She favors outcasts — bugs, crows, squirrels, cats and the like.

“I like to shine a light on things people don’t like. I will make you like them. They might not be pretty, but if you look deeply, the beauty is there. Maybe if I draw it big enough, I can help you see it,” she says.

She can go textbook on her subjects, zooming in to reveal subtle patterns, hues and symmetry. Goliath beetles never looked so charming.

She can go storybook, too, bestowing her critters with human behaviors and accessories.

A wolf wears a red scarf.

A goat mouths a pair of eyeglasses by one temple.

A praying mantis answers a knock at its door. 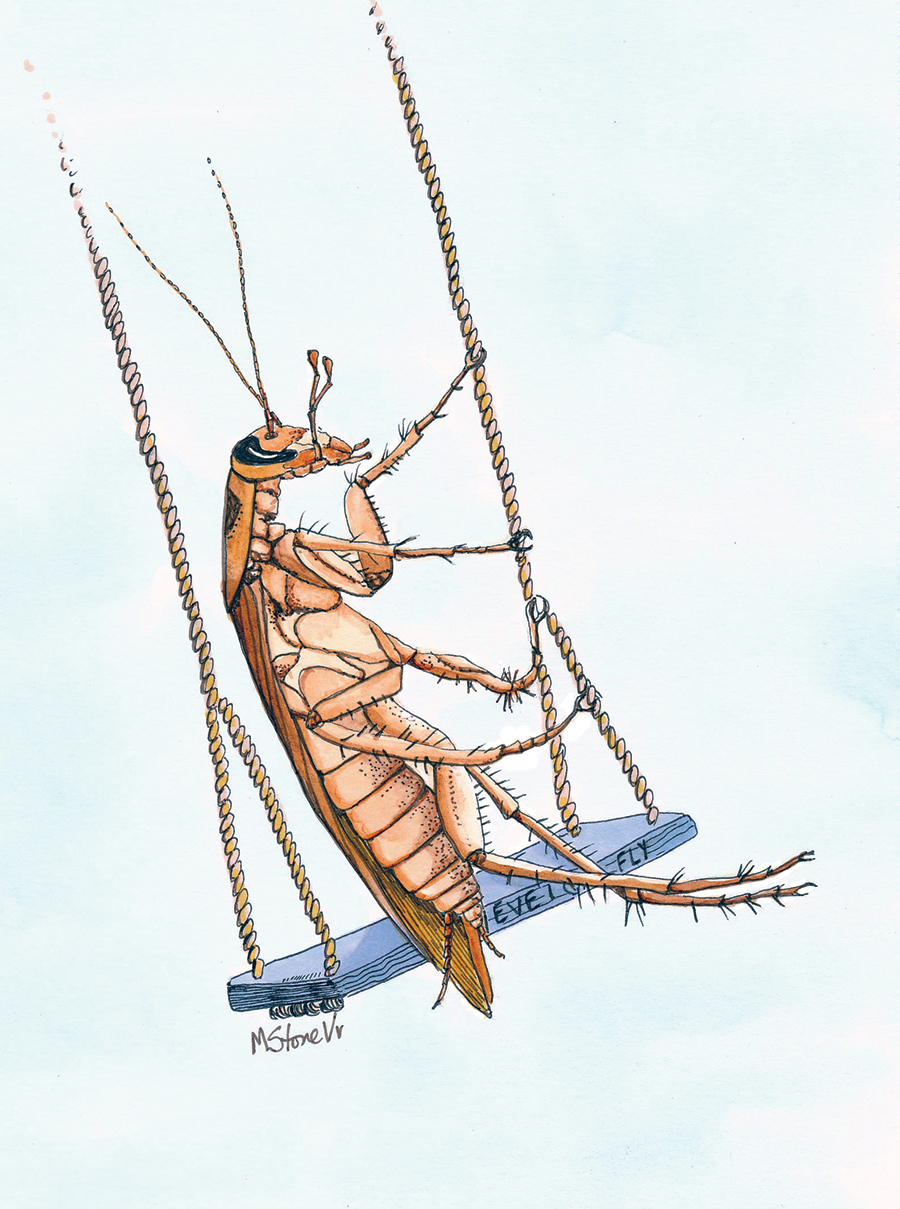 A cockroach known as Mr. Scuttles lies on his back, spiny arms linked behind his head as he meditates.

Mr. Scuttles is a stock character in Stone-van Vuuren’s menagerie. She first drew him in the fall of 2019 as a part of Inktober, an online challenge that feeds artists daily prompts.

For the prompt “ring,” she drew Mr. Scuttles tapping a desk bell for service.

For “wild,” she put him astride a chopper-style motorcycle.

For “ancient,” she wrapped him like a mummy in toilet paper.

She points to a February 2020 group exhibit at The Artery Gallery in Greensboro, her last show before COVID hit. The works depicting Mr. Scuttles scurried out of the shop quickly. The gallery asked her to bring whatever cockroach art she had left.

“I think we sold almost all of it,” says Esia Ackley, co-owner of the gallery. “In fact, I purchased one. It’s Mr. Scuttles drinking tea. He’s in my kitchen. Other people might be like, ‘Why would you put that in your kitchen?’ but I like it. It looks like Mr. Scuttles could have a wonderful conversation with you. There’s a whole story you can imagine about it.”

Clark Whittington is another fan of Stone-van Vuuren’s work. He owns Art-o-mat, a Winston-Salem–based company that converts old cigarette vending machines into art dispensers and leases them to high-traffic businesses. AOM stocks the machines with $5 works from an international pool of creators, most of whom view the pocket-size art as a calling card that could lead to bigger projects.

Her works for AOM — she confirms they’ve sparked lots of commissions — include 50-piece runs of bugs, robots, big-screen monsters and famous film directors.

Her love of cinema, especially costume and set design, extends to collaborations with her husband, filmmaker Stephen van Vuuren, whose best-known work is In Saturn’s Rings, a 2018 theater-released documentary narrated by LeVar Burton. (Read more in the June 2015 issue of O.Henry: https://issuu.com/ohenrymag/docs/june_2015_oh_ad_list/42)

The couple’s company, SV2 Studios, embraces the creative output of both.

“We’re not following a conventional approach to life,” Marie Stone-van Vuuren says. “But any other way, and we would kind of be dead inside.”

She has stayed busy since the pandemic began. She continues to sell through fineartamerica.com and pixels.com, which reproduce her images on prints, pillows, tote bags, cards, yoga mats, and face masks among other items.

At 62, Stone-van Vuuren will resume gallery shows when she feels safe asking people to assemble indoors. She’s tinkering with the idea of virtual shows. She’s also reflecting on the nature of her work

“I kind of wanted to pause anyway, to take a step back and think about what I want to do in this next chapter. Moving forward, what does my art look like? I like to explore and do different things. We’re multifaceted people, and I think art should reflect that. I just want to see what else is in there and what will emerge if I give it room.”

If the kitty tickles other people, that’s a bonus.

“It’s good to know my art is making people laugh in a good way,” she says. “Finding delight is a righteous goal.”  OH