Architect Peter Freeman had a problem. While he was pleased with his ambitious design for a light fixture for a medical facility, he wasn’t sure how to build it. He wasn’t even sure it could be built.

So Freeman did what many architects, designers, museums, corporations, nonprofits and private individuals are doing these days. He reached out to Stabb Designs in High Point.

Yet the mechanical engineering — what Stabb calls the “function” side — of his creativity had always been driven by a love for artistic creation. 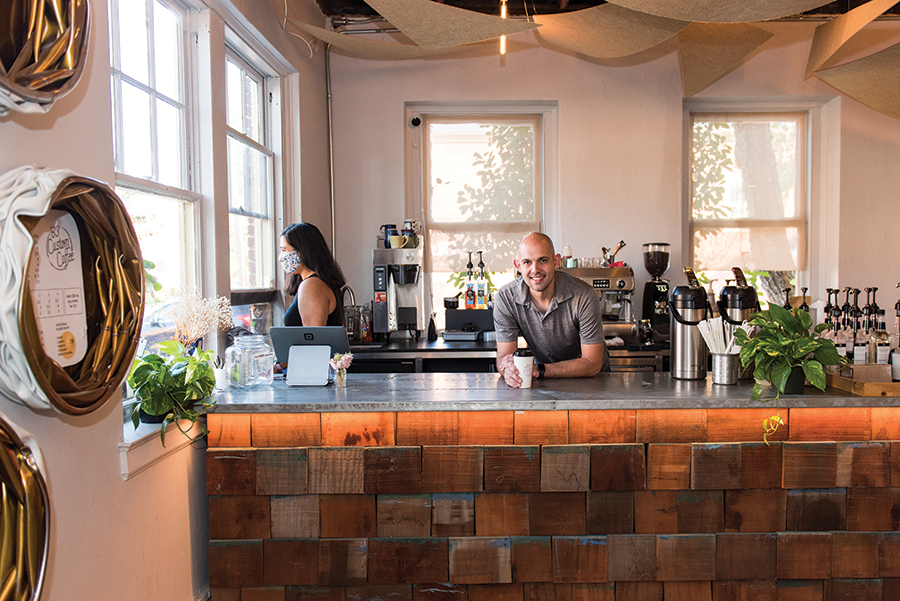 I was determined to learn more. So here I am, opening the door to a low-slung building on West Green Drive. I’m greeted by a tall man with a shaved head, short-clipped beard and dark brown eyes. In this age of Covid, I’m wearing a surgical mask, and we keep our distance, nodding greetings. Though we don’t shake hands, I see his are big, the hands of a man who makes things.

Stabb introduces me to Brittany Rankin, the office manager, his first employee. He hired her as a barista for ’83 Custom Coffee, originated in 2018, another Stabb enterprise.

His “coffee house” is a black pickup painted with the ’83 Custom Coffee logo and modified truck bed — I walked by it on West Green Drive as I entered the building. It provides fresh-brewed gourmet coffee and a pleasant place to gather to share ideas. While the truck café left some High Pointers scratching their heads, it’s now a fixture in town.

“I come from an unconventional background,” Stabb says. “My grandmother was a professional oil painter. My grandfather was a patent attorney.” So from the time he was a boy, Stabb’s imagination was shaped by both creation and construction.

Stabb tells me his father was a contractor in Oakland, California, who built and set up a small work bench in the back yard, where his son could glue together model airplanes and car kits while he worked on building projects.

“I remember sitting in that golden California sunshine, watching my Dad,” Stabb says. “It was great, getting to see the things he made.” 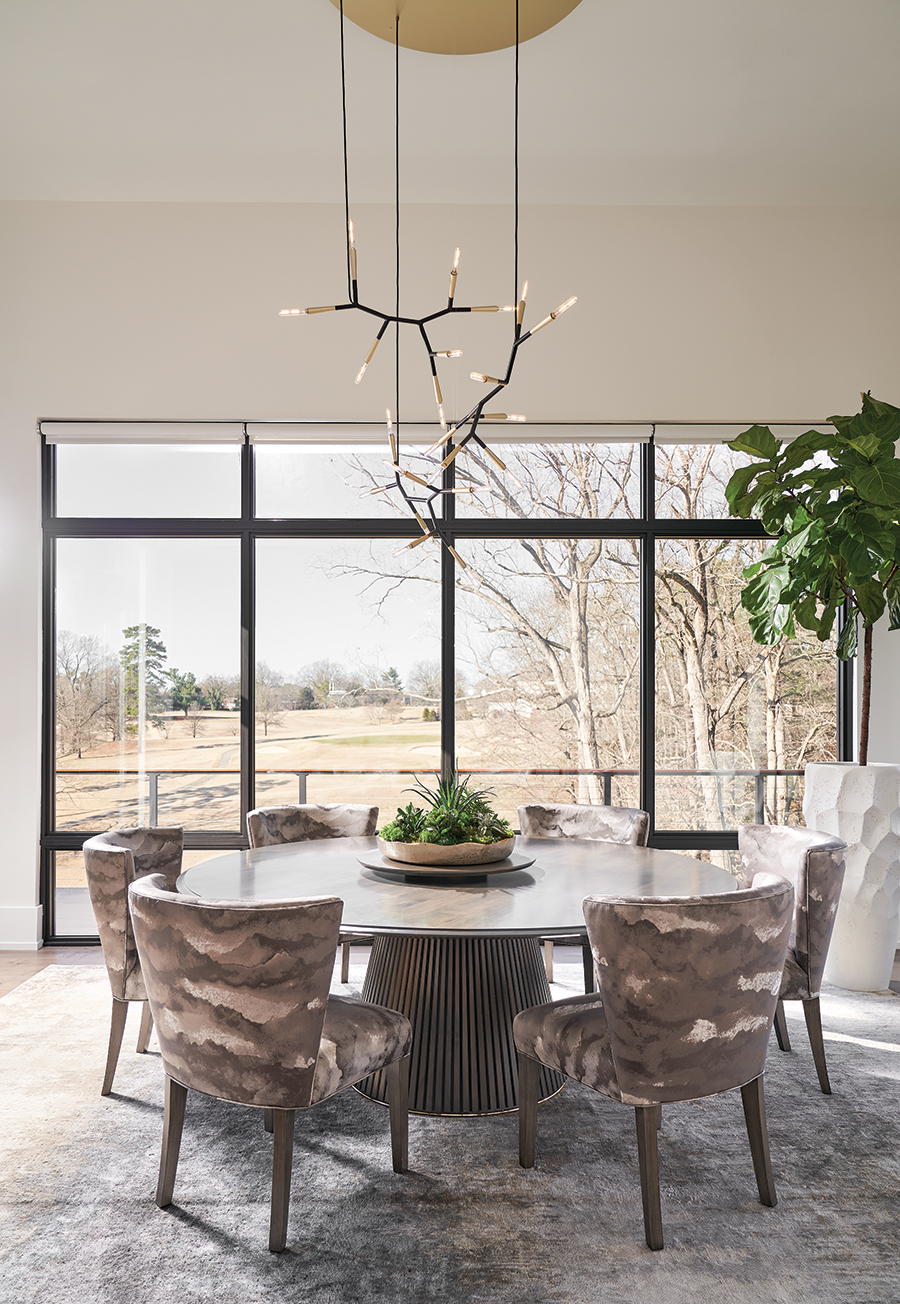 Later Stabb moved to Rochester, New York, and would study at the Rochester Institute of Technology, one of the leading universities in the nation for training in technology, the arts and design.

Along the way, Stabb started working at the age of 15 for Mahany Welding Supply, a company founded in Rochester in 1946. He continued for seven years, gaining more responsibility for larger projects as he proved his abilities and his experience grew.

There, Stabb learned welding and blacksmithing from Michael Krupnicki, the owner of the business. In 2001, Krupnicki had decided to start offering welder training classes not only for professional tradesmen, but also for the general public, through day clinics, night courses, collegiate and vocational classes, plus professional welder qualification programs.

His programs were so successful that in 2012 Krupnicki formed Rochester Arc + Flame Center, where experienced professionals and world-class artists now offer classes in welding, smithing, glasswork and jewelry. 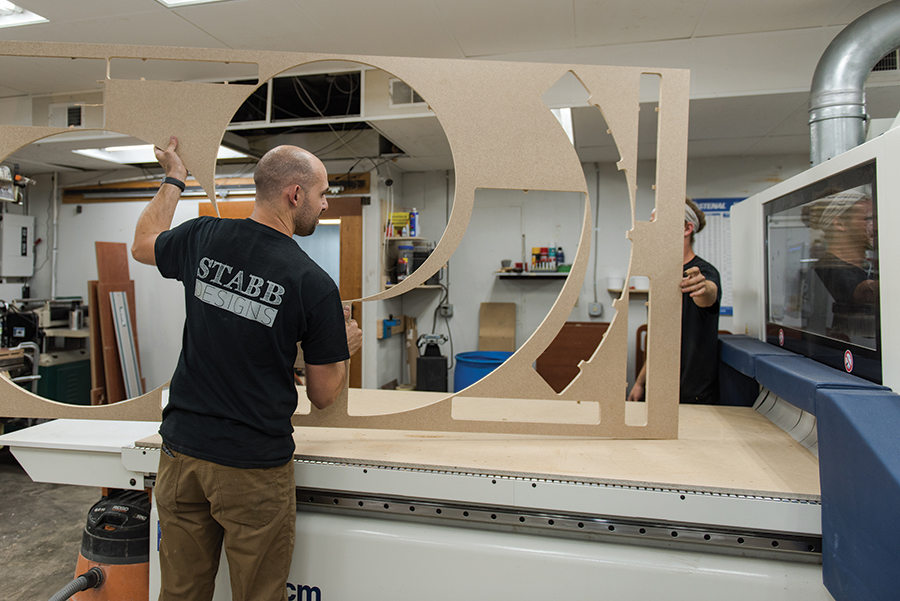 He walks me to the area of the shop where he finished the Freeman lighting piece.

“First we had to come up with the parts that would be assembled for the light,” Stabb says. “We needed to design something that would be strong, but relatively lightweight.”

Using his 3D printer, Stabb designed and made a prototype for the element, which could then be precisely reproduced in quantity.

Next was the colored glass for the light. Following Freeman’s design, an intricate shape had to be carved out of the centers of the small glass panes.

“One of our suppliers used water-jet technology to cut the holes,” Stabb says. “We didn’t know for sure that the water jet would work, but it did.” Stabb adds that he likes projects that test the limits of fabrication technology.

The problem with the etched-out panes was that the edges of cuts were sharp and brittle-looking.

“So we fired them again in the kiln,” he says, handing me one of the leftover panes to inspect. The edges are smooth to the touch, elegant-looking.

“Firing the glass again smoothed the edges, made them organic-looking,” Stabb says. “That’s what we were looking for.” 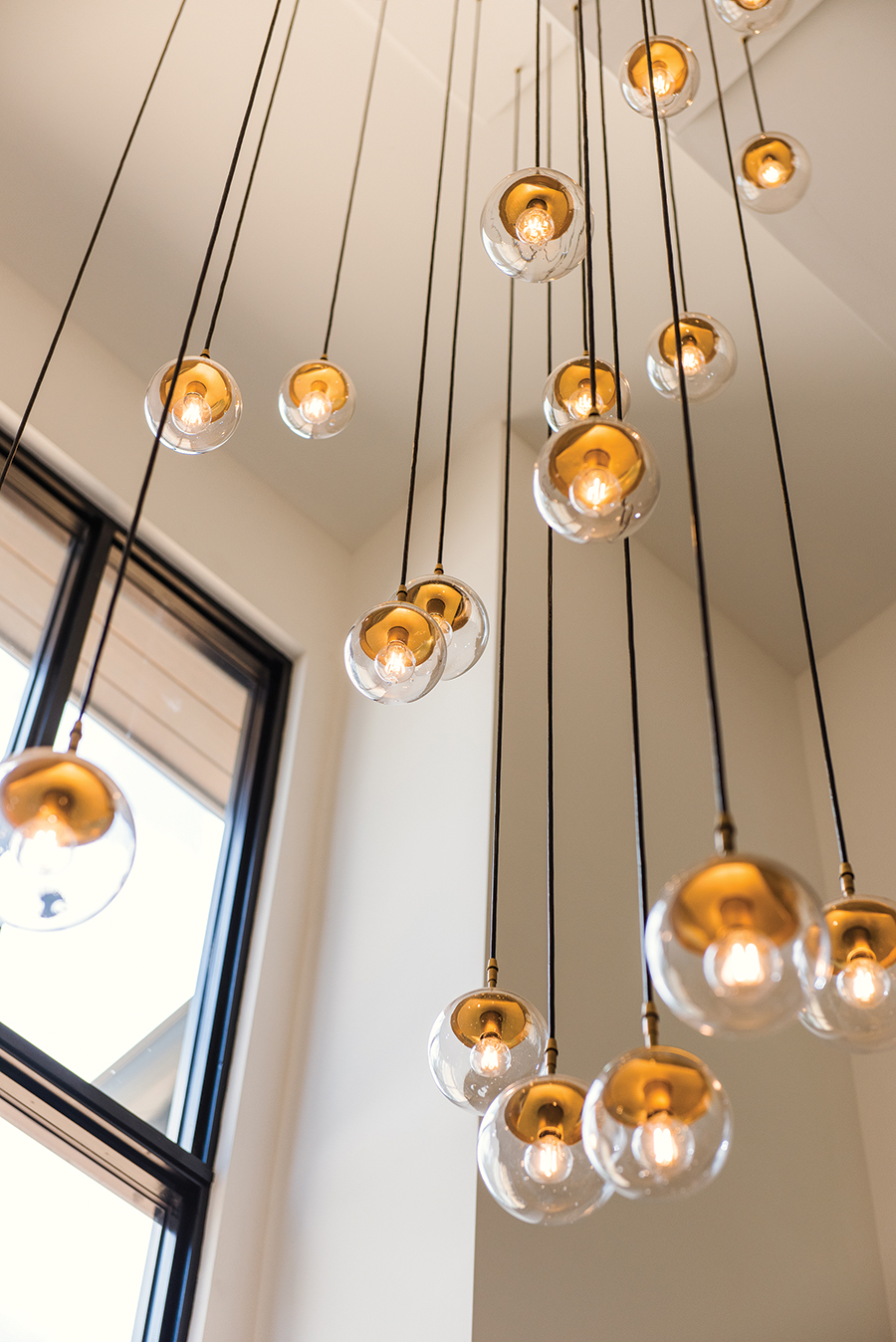 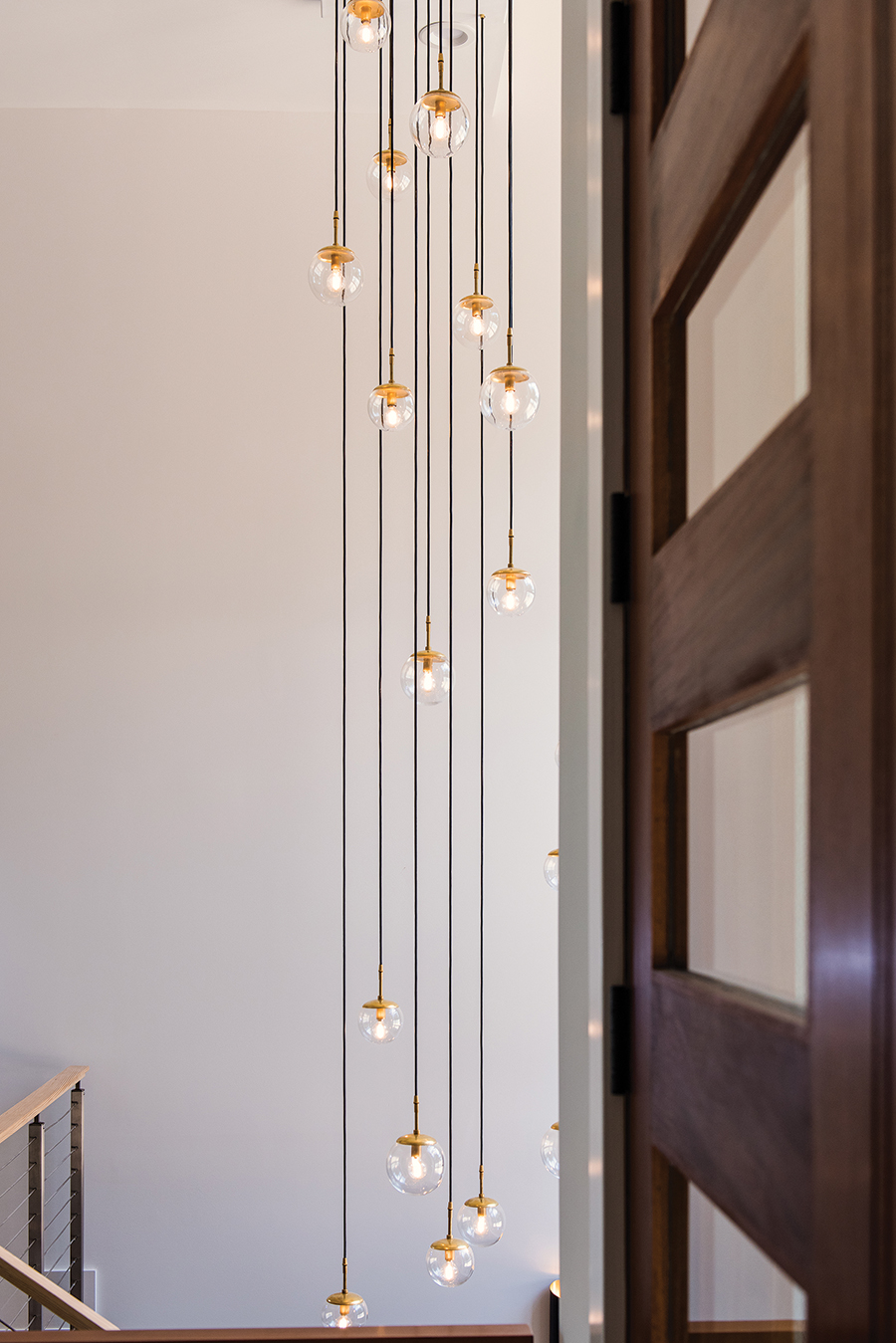 Stabb explains that pieces like Peter Freeman’s light fixture give him the opportunity to excel.

“I describe what I do as ‘dream-making,’” he says. “Give me a problem. Let me mix from a palette of materials to solve it.”

We move on to an element from a different lighting project. It’s bigger than a hollowed-out bass drum. Encircling its center is a ring of LEDs. Next Stabb shows me one of the fins that will be attached to the drum.

“Each one of these fixtures, when finished, will be about 12 feet in diameter,” he says.

“That’s way more than we need to suspend it,” Stabb continues. “But we’re using wire, and we wanted an industrial look.”

He opens a door and we move into a back area of the shop. Here the other drum light fixtures are stored, awaiting assembly, along with other projects.

He points to an impressive air-cleaning system that reaches from floor to ceiling. Calling on his machine design experience, Stabb reverse-engineered the system from diagrams and other systems he’d seen, making it himself and saving thousands of dollars from what he would’ve paid had he purchased one.

As we talk, another of Stabb’s employees walks in. He’s lanky, with blue eyes and sandy blond hair and looks to be college age. His name is Clayton Brewer. Stabb tells me his specialties are fabrication and installation of big displays.

“His grandmother wants him to go to college,” Stabb says. He explains that Brewer isn’t really interested, so they’re developing a special curriculum that will cover fabrication and design and art, along with management and accounting courses from different institutions so Brewer can one day run his own business.

Stabb tells me his other employee, craftsman Brad Grubb, is out of the office working on location.

Looking at the air cleaner, I ask Stabb if he’s ever considered going back to the industrial sector.

“Designing machines for manufacturing is something I used to do full-time,” he responds. “It’s lucrative, but it’s all function and no art.” He explains that the work he’s done for manufacturers will only be experienced by the employees who work in their facilities.

“I want to make things my kids will get to see,” Stabb adds. For that reason he’s keeping his focus on some artistic projects that can be viewed in commercial and public settings.

“But I like making big things,” he says. “That way I can leverage my industrial experience.”

Stabb Designs built a life-size wooden train locomotive that was installed at the Cincinnati Museum Center at Union Terminal. They’ve fabricated custom lighting fixtures made from wooden bats and made beer taps from old repurposed tools for a baseball stadium.

The magnificent light designed by Freeman? It’s ready for installation at Bethany Medical.

So what dreams does dream-maker Justin Stabb envision for himself?

Right now his company is designing a section of Plant 7 at Congdon Yards in High Point. The downtown facility will provide access for fabricators and designers to expensive, state-of-the-art equipment inaccessible to the budgets of small companies, especially start-ups.

“In November Stabb Designs will be moving into a 14,000-square-foot facility,” he says. That’s a big step up from the modest building I’m visiting now.

“And someday I want to have a product line,” Stabb continues. “Maybe I’ll downscale some of our big projects. I like repurposing. And I want to find ways to repurpose what I’ve learned.”

As I’m about to leave, I notice a little work bench made of wood near Stabb’s computer. The low bench has a vise, screwdrivers, child-size braces with auger bits and other tools scattered over its surface.

“For my kids,” Stabb says. He smiles.

As I leave, I think of that young boy sitting in the California sun, watching his father make something. I expect Stabb Designs will be making a world of dreams in the years ahead.  OH

Ross Howell Jr. is a novelist and freelance magazine writer in Greensboro.