It all started with a newspaper column yours truly wrote a year ago. The story involved a couple of guys from Toronto who were organizing mass singalongs in acoustic-friendly buildings and posting them on YouTube. So intrigued was I that I wondered whether this could be a worthwhile endeavor for Greensboro.

The response was virtually unanimous that, indeed, we possessed the talent and wherewithal locally to replicate it here. So, I took the idea to my musician friend, Jessica Mashburn, who sits on the board of the Carolina Theatre, and she, in turn, took it to director Brian Gray, who gave it an enthusiastic thumbs-up.

Next we organized an all-star committee, who agreed that we had been afforded a chance to do something far more meaningful than a fun afternoon harmonizing among 1,100 of our closest friends. At a time of societal divisiveness and polarization, we had been handed an opportunity to bring the community together, in all its mosaic beauty. So, to make the point, we capitalized on the “U” in community when we named the event, resulting in This CommUnity Sings.

We set the date for Sunday, February 18, from 2–5 p.m. (carolinatheatre.com/event/community-sings) In a nutshell, here’s what’s in store:

The event is free. Anyone can come. Once there, everyone will divide up into one of four vocal ranges and be taught their parts by musical directors Bill Young and Ron Jones, department heads at UNCG and N.C. A&T, respectively. We will learn three songs: “Carolina on my Mind,” “Bohemian Rhapsody” and “What a Wonderful World.” We will have stationary and roving cameras videotaping the performance, to be posted on YouTube streamed live.

Eric Chilton, weatherman and host at WFMY-TV, and a noted singer and bandleader in his own right, will be our emcee.

Getting us in the festive spirit, the drum lines from Grimsley High and A&T will perform outside, and no fewer than four eclectic bands will serenade inside the theatre. The bar and concession stand will be open. There is no admission charge.

Most important, do not be deterred if you can’t carry a tune in a bucket. We will have enough trained vocalists there to put on a stunning show. All you need is a smile on your face and a song in your heart.

Oh, and if this goes as well as we anticipate, it may become an annual event.  OH 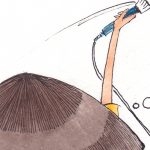