Warning: "continue" targeting switch is equivalent to "break". Did you mean to use "continue 2"? in /var/www/wp-content/themes/jupiter/framework/includes/minify/src/Minifier.php on line 227
 Don’t Try It ’til You’ve Nocced It – O.Henry Magazine

Don’t Try It ’til You’ve Nocced It

Growing your own mushrooms gets a boost in Saxapahaw

Wearing the knit headband and sun-kissed cheeks of an avid outdoorswoman, Jeanne Verrecchio traces her mushroom obsession to the COVID pandemic.

Last summer, she spent some of her down time watching the Netflix documentary Fantastic Fungi.

“I said, ‘This is what I want to do. I want to learn about mushrooms,’” says Verrecchio, her Brooklyn accent underlining her earnestness.

She slipped down the fungal slope quickly. She read up on edible mushrooms. A friend up the street gave her a growing kit for Christmas.

In January, when Verrecchio retired from her job as an oncology nurse at Duke University Medical Center, her colleagues threw her a going-away party in a conference room. They hung paper mushrooms from the ceiling. They gave her an accent pillow covered with a charming mushroom print. They decorated her cake with little plastic mushrooms. They presented her with gold-plated mushroom earrings.

In February, Verrecchio took a mushroom foraging class led by an expert in Durham.

And now, on a nippy Saturday morning, Verrecchio and 15 others stand in a semicircle in a barnyard at Haw River Mushrooms, in the Alamance County community of Saxapahaw, using battery-powered drills to poke holes in logs perched on sawhorses in front of them.

In a few minutes, the students will begin noccing — short for inoculating and pronounced “knocking” — their logs with cultures that will grow into mushrooms. 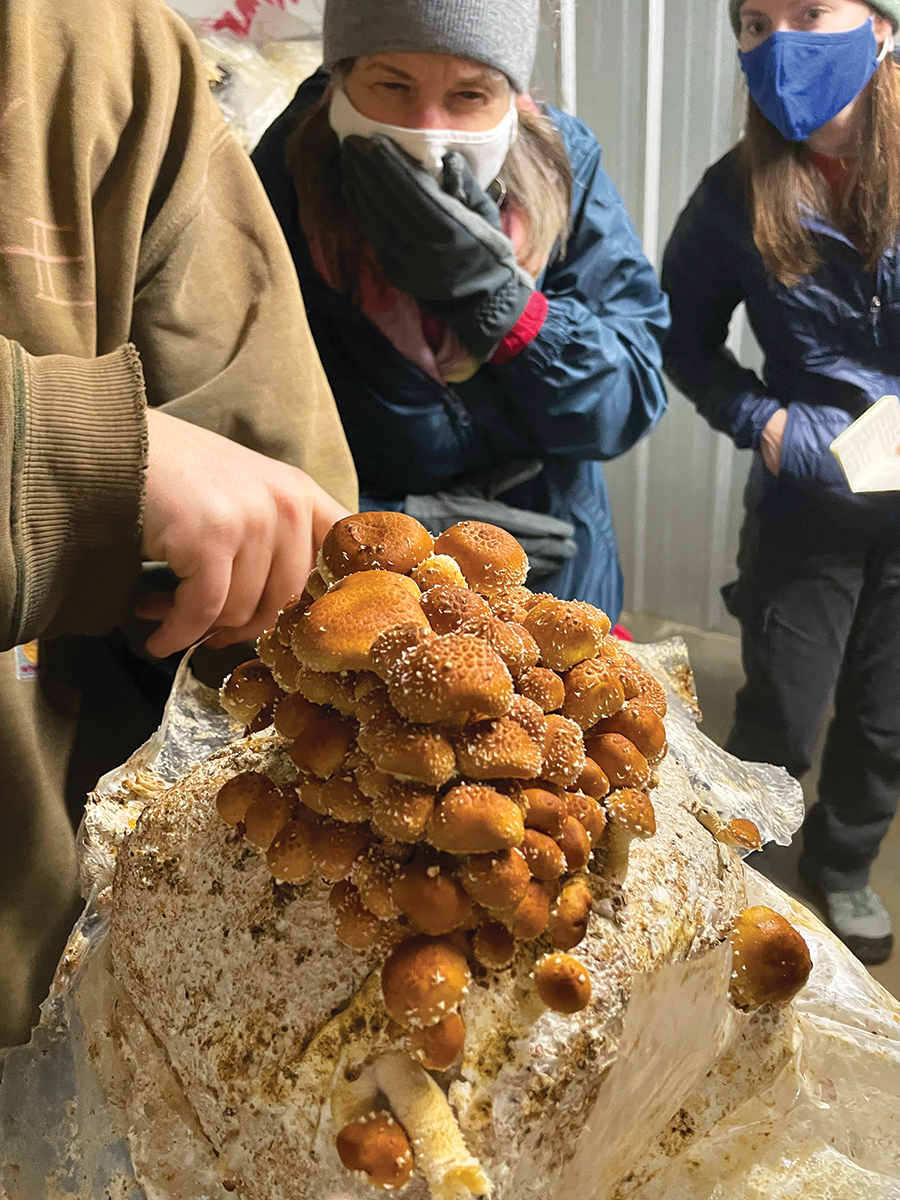 Prepandemic, more than 200 people a year signed up for Haw River’s noccing classes, which were designed to make participants more fungi friendly.

“We want mushroom gardening to be as common as tomato gardening in North Carolina,” says Laura Stewart, who owns the farm with husband Ches. “Mushrooms grown on logs are about the most laid-back product you can add to your garden. They’re very resilient.”

COVID halted the noccing classes in 2020 and 2021, and the term inoculation took on a different meaning. But earlier this year, as the pandemic subsided in this country, the Stewarts and their employees resumed their noccing events, as well as mushroom foraging on the property.

A concern about the environment and a push for sustainable agriculture. A growing number of vegetarians in this country. An interest in the medicinal qualities of mushrooms, especially as anticancer agents.

The pandemic helped the fungal cause too.

Fantastic Fungi, the Netflix doc, sparked a wave of interest, she says. And some people started growing mushrooms as a socially distanced hobby. Count 14-year-old Alex McPherson in their number.

“I looked it up during quarantine,” she says. “I was bored, so I thought, ‘Mushrooms. Sure, why not?’”

Her father, Heath, followed her lead. They ordered a growing kit and marveled at the fungi that sprouted in Heath’s office in their north Raleigh home.

“It’s kind of like growing flowers,” says Heath. “There’s an aesthetic to it. The colors, the textures. It helps us to try different foods, too.”

Alex enjoys mushrooms with pasta. “Anything pasta,” she says.

For noccer Adam Dovenitz, who lives in Durham, pizza is a powerful motivator. He once grew blue oyster mushrooms and put them on a pie.

“They were amazing,” says Dovenitz, long a devotee of edible fungi. When he was 10, he experimented with inoculating logs and nearly caught his parents’ home on fire while melting wax to plug the nocc holes.

“I learned you don’t put out a wax fire with water,” Dovenitz says, throwing his hands apart with an explosive “PSHHHH!” to communicate the idea of “wax fire.”

“Now, I actually have good instruction.” 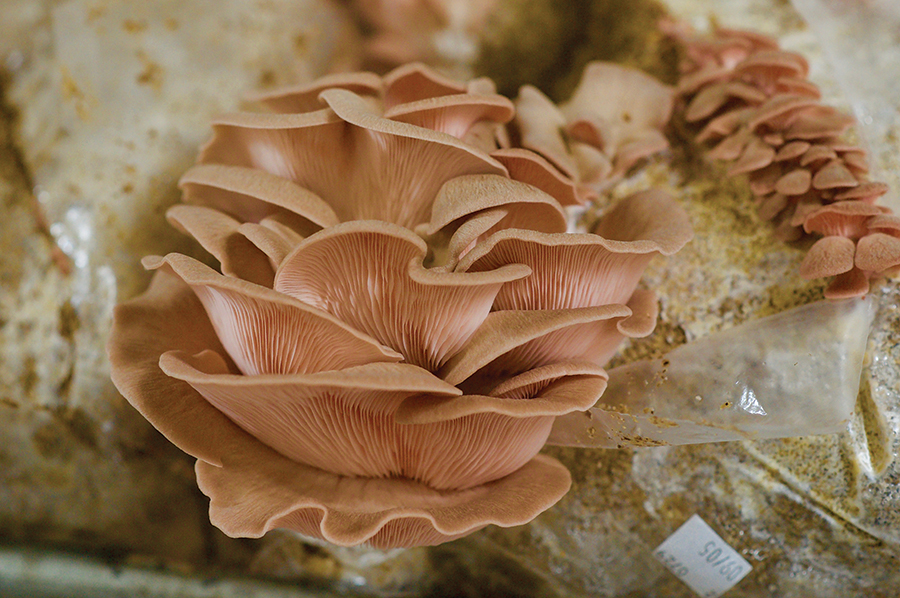 And how. The Stewarts have been full-time mushroom farmers for five years.

In March 2020, they moved to a 17-acre spread where they expanded their operation to several outbuildings, including an old railroad shipping container, two repurposed truck trailers and a new barn.

Their yield: 30 tons of mushrooms a year.

More than half the haul goes to 10 farmers markets in the Triangle and Triad.

Restaurants get the next biggest slice, about six tons.

The rest goes to subscribers of Community Supported Agriculture.

Eric Dragone and Susan Pizzuti of Carrboro buy the Stewarts’ mushrooms at their local farmers’ market. They’re fond of the lion’s mane variety, which has a flavor similar to crab meat.

“She’s replaced most of the meat in our diets with mushrooms.” says Dragone, nodding proudly to Pizzuti.

Hoping to grow their own fungi, the young couple have signed up for the noccing class, which begins with a tour of the farm.

They see how the Stewarts make their own growing medium from locally sourced oak sawdust and soybean hulls. They hear how the Stewarts pasteurize and inoculate the medium with a rainbow of oyster mushrooms, cinnamon caps, black pearls, lion’s mane, shittake and the medicinal reishi.

They step into the earthy air of a trailer and witness how the cultures colonize — in plastic bags on racks made from metal pipes — into masses of white mycelium, the brainlike motherships of mushrooms.

Students then dip their feet into an anti-fungal bath and enter misty grow rooms, where scores of plastic bags have been slit open to reveal the fruit of the mycelium— plump buttons, domes, ruffles and fingers of mushrooms in luscious shades of blue, gray, rust, gold and cream.

Outside, after breaking for a cup of soup made from lemon grass, lion’s mane and coconut milk — “Do you have, like, six more gallons of this soup? It’s incredible,” says Dragone — Laura Stewart preps her charges with a couple of nocc talks. 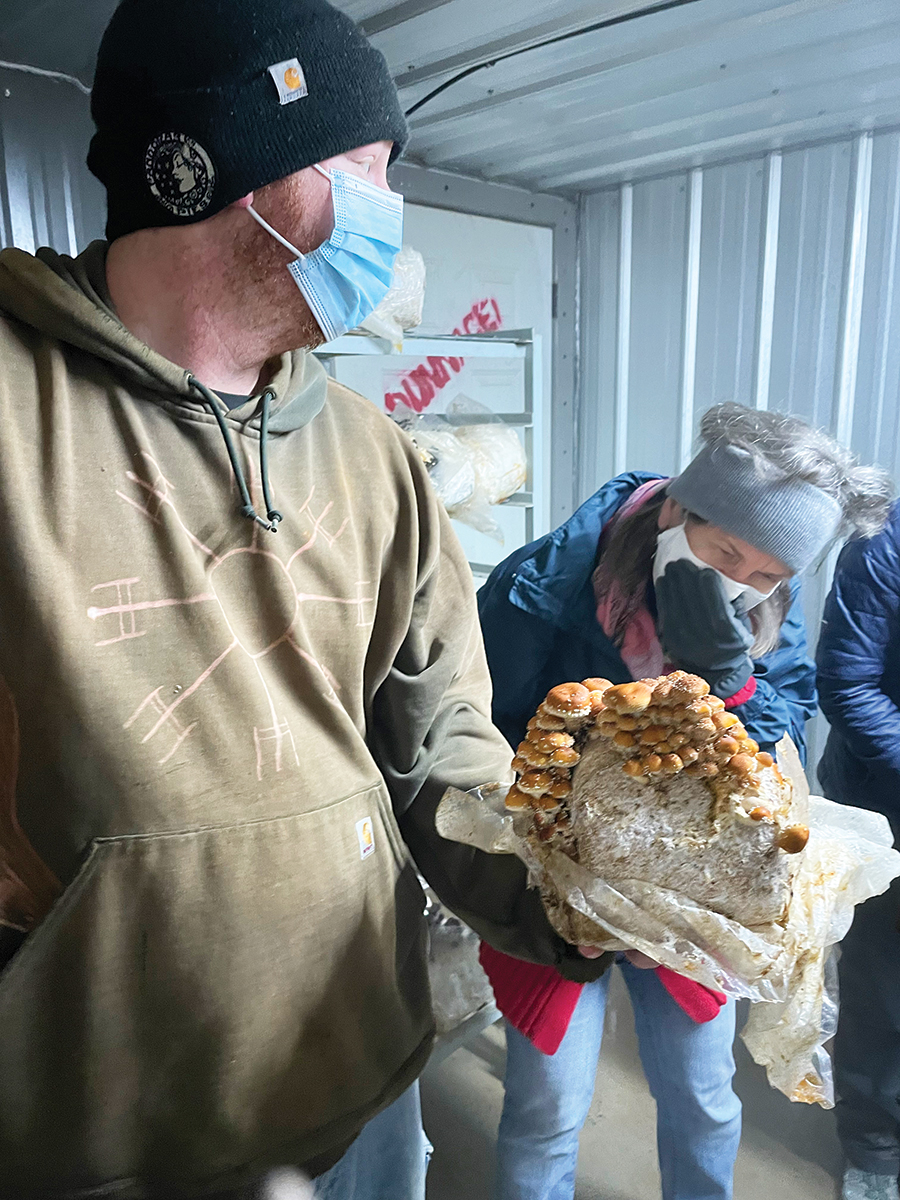 The Log Talk: You will select four logs of freshly cut oak, which is the best host for mushrooms. Other types of logs will work, but don’t use dead wood because it’s already growing stuff.

The Spawn Talk: You will receive cups of cultures — mashed mycelium — and an inoculator resembling a big brass syringe to inject the cultures into the log holes. You will have a choice of blue oyster, shiitake and lion’s mane mushrooms, but jab each log with only one variety of mushroom. More than one culture guarantees fungal war.

The pupils get to noccing.

Amber Brothers who runs Elijah’s Farm in the Rougement, hopes to add more mushrooms to the produce she sells at the Black Farmers’ Market in Durham, at another market in Henderson, and — one day, she hopes — at a market-on-wheels that she will drive into poor communities.

“I want to teach low-income kids about sustainability,” she says.

Already, she has converted part of her home into a mushroom growing center.

“My living room is covered in plastic, with vents out the windows,” she says.

Lori and Dan Seiler of Burlington are interested in the marketability of mushrooms as well.

Prepandemic, they enjoyed a special all-mushroom dinner prepared by a chef in Raleigh. When COVID dinged their janitorial business, they warmed to the idea of growing mushrooms as a side hustle on their five-acre place.

To that end, they’re inoculating their logs with shiitake, lion’s mane and blue oyster cultures and daubing the holes with paraffin, while gently shooing a tabby cat who keeps jumping aboard to investigate.

Laura wraps up the class with a final address.

The Care Talk: Don’t let your logs get dirty. Don’t let them dry out. Set them in a shady spot out of the wind. Don’t worry if the paraffin peels off your nocc holes. And don’t worry about the myth that you should seal the ends of the logs, too.

“I think that’s a conspiracy spread by Big Wax,” Laura says with a grin, her blond ponytail protruding from the backside of her trucker hat.

Within a year, she advises, you should see mushrooms growing from your logs. Check them frequently.

“It’s a good experience to go out after a rainy day and realize, ‘Oh, I just made myself a meal,’” she says.

“I want you to be successful,” says Laura, who, like her crop, is pretty laid back.

“Anything with farming pushes you into more systems thinking,” she says. “You realize, ‘OK, everything is related,’ and if that’s your thinking from the get-go, it makes you a little more empathetic.”  OH