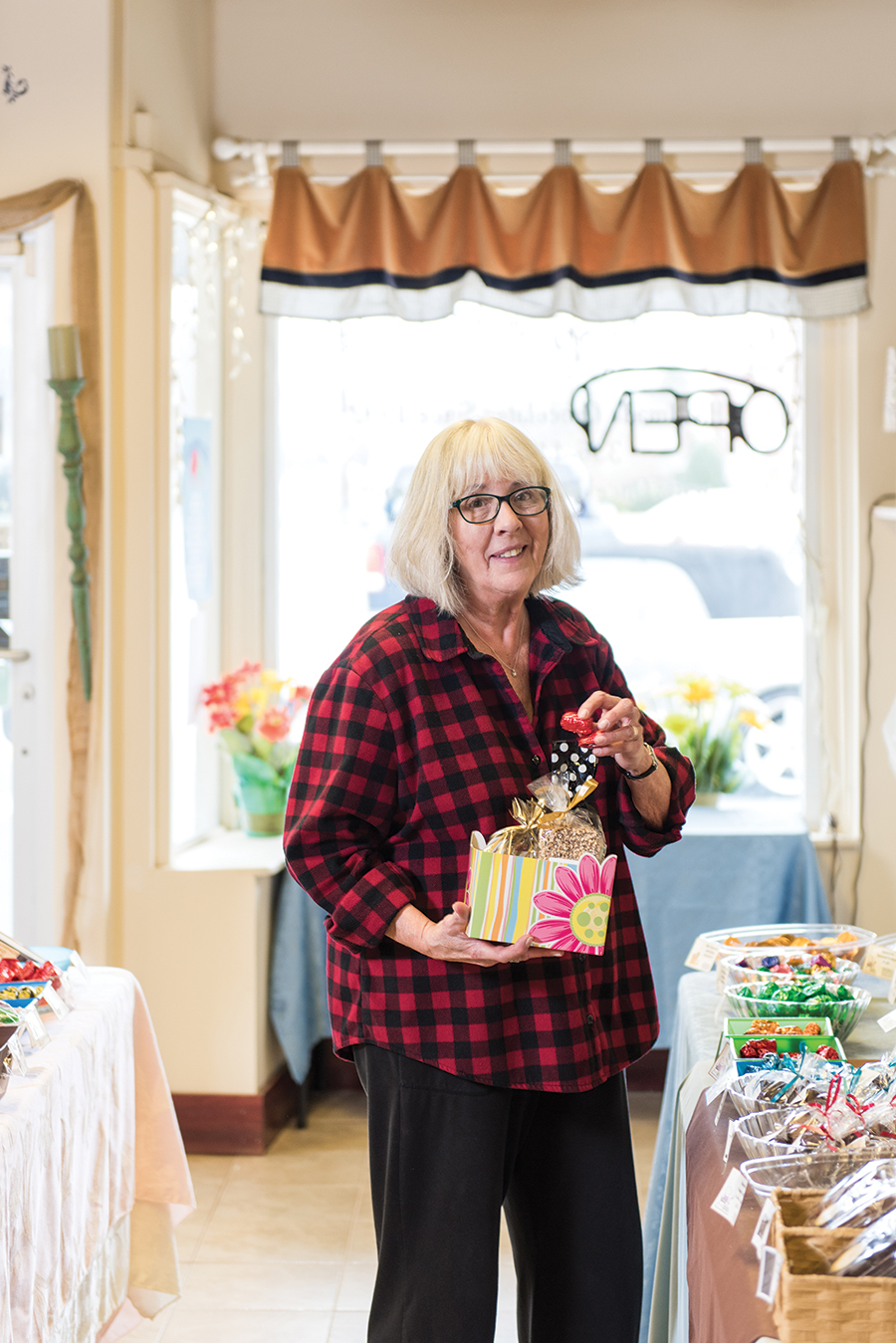 Relax, last-minute lovers. Debbie Stephens, the owner of Once Upon a Chocolate in Gibsonville, has your back at Valentine’s Day.

After nearly 30 years in the chocolate business, she knows what to expect.

You’ll saunter into her corner store on V-Day — or the day before, if you’re the plan-ahead sort — looking for confections to express your affection. Some of you will appear to be rather desperate.

You might ask Stephens what kind of chocolate she thinks your beloved would like — an indication that you might have issues that chocolate alone can’t fix.

But, being an experienced businesswoman, the type with a soft-centered heart, Stephens will be kind. She’ll ask what sorts of sweets your sweetie savors, then she’ll guide you through a vast selection of velvety truffles and crunchy nut clusters arranged, in regimented rows, inside a gleaming glass case. 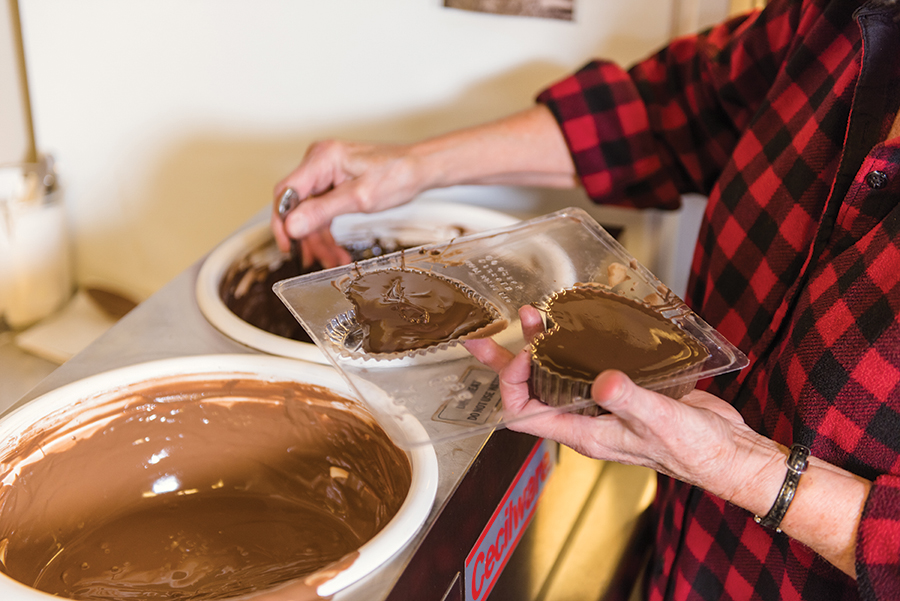 If you’re looking for a more direct statement of purpose, she can show you hearts, Cupids, roses and lips wrapped in bright foil skins and glossy cellophane bags.

She will have stocked up for the holiday, having hand-poured more candies than usual. Her small-batch method — along with her ability to mold custom chocolates in almost any shape you can imagine — sets her apart from most retail chocolatiers, who buy their wares from wholesalers.

“It’s what enables my website to thrive,” she says.

Her success embodies a sort of Forrest Gump Paradox. Gump, the movie character, famously quoted his mother as saying, “Life is like a box of chocolates. You never know what you’re going to get.” Stephens didn’t realize, until she was in her 30s, that she could make a second career of allowing people to know exactly what kind of chocolate they were going to get. 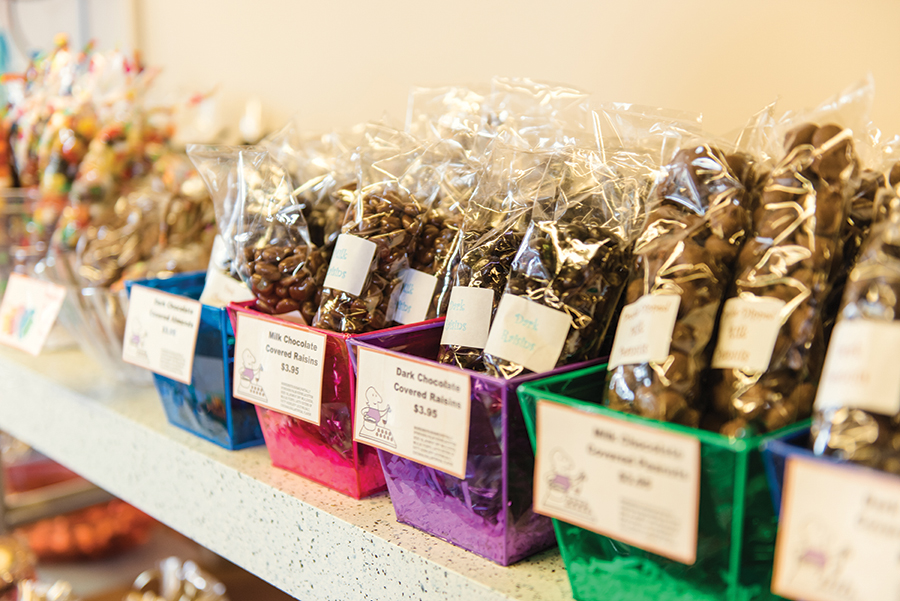 Back in the 1990s, she was living in Florida, working as an office manager for a home improvement chain, and looking for an exit ramp from corporate life. Her mother, a small business expert with the state of Mississippi, suggested that she buy a chocolate shop franchise.

Stephens had no experience making candy, but she liked crafting, and she figured she could learn to get creative with cocoa.

Debbie Boggs, the wife of All-Star baseball player Wade Boggs, used to order hundreds of candy bars, with a family photo printed on the wrapper, for a Christmas party they hosted every year. 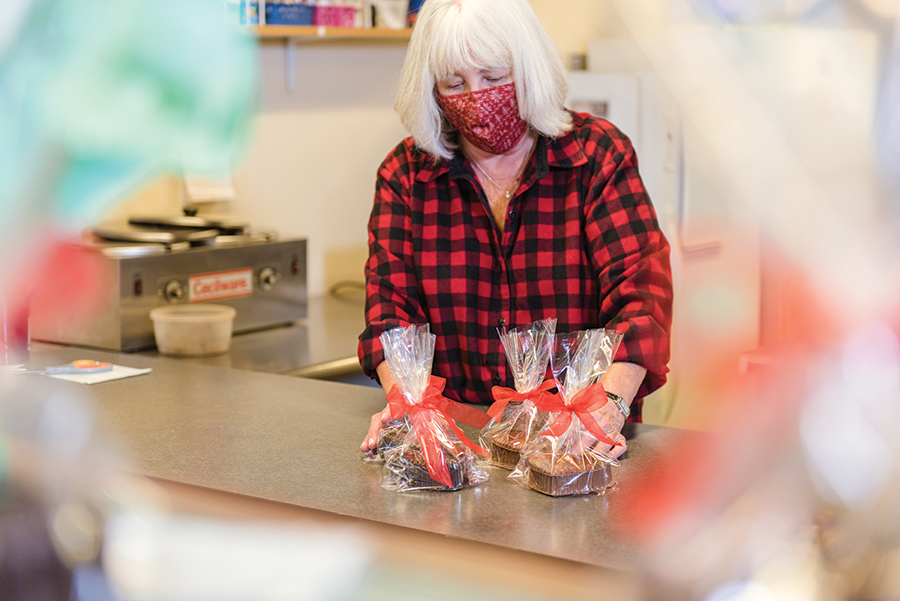 Within a couple of years, Stephens bought the store from the franchiser. Personalized chocolate was a good fit for her. Local customers kept her busy, and as online shopping took off in the early 2000s, people started locating the hard-to-find shapes on her website.

One year, a helicopter-related company in the Netherlands ordered a fleet of chocolate choppers.

“I was thinking, ‘Is there no one closer to you that has chocolates? You’re in a candy country,’” says Stephens, who happily obliged the company nevertheless.

Another memorable order came from a mall management company in the U.S. For a grand opening, they wanted custom-wrapped chocolate bars, some containing golden tickets for prizes, like the candy bars in Willy Wonka and the Chocolate Factory.

The biggest order ever — 2,000 boxes, each containing five custom chocolates — came from a marketing company that was handling swag for a funeral home company headed to an industry convention in Las Vegas.

The boxes — which included a chocolate bar with the company logo, a chocolate golf ball and a grand truffle with a money sign on top — went into the hotel rooms of company guests.

In 2010, Stephens sold the Tampa business — including the name and molds — and she and her husband moved to Burlington to be closer to family.

“I started over from scratch,” says Stephens. “I didn’t have anything but a little bit of knowledge about things that worked and things that didn’t work.”

She set up shop in Gibsonville at the corner of Piedmont and Burlington avenues, a short hop from Main Street.

“The small downtown setting appealed to me,” she says. “We have a wonderful merchants’ association, and the town is always striving to be better. There’s a sense of community that isn’t found in a big city.”

The railroad-flavored business district, with its signature red caboose and garden train, draws a steady trickle of visitors, many with children. For them and other youngsters, Stephens keeps a ready supply of chocolates resembling the superhero Falcon, the folksy Thomas the Tank Engine and the robotic Transformers.

Area businesses — including The Inn at Elon, Cone Health and Duke University — count on her for candies bearing their logos.

But the majority of her business — in non-COVID times anyway — comes from out-of-staters who find her shop online and call in their orders. Stephens handles the details by phone to ensure accuracy.

“I have customers telling me all the time that it is refreshing to talk directly to an owner,” she says.

Her top seller is the gold foil-wrapped figure that’s billed on her website as a “chocolate Oscar-style statue.”

The stand-up figure is a winner with people who host Hollywood-themed gatherings and watch parties for the annual Academy Awards show, which has been moved to April 25 this year because of COVID.

Six years ago, Parade magazine mentioned Stephens’ chocolate statues in a story about Oscar parties. She was inundated with calls the next day.

“It was so bad that Monday morning, we had to take the phone off the hook,” she says. “That was a case where too much publicity was a bad thing.”

Stephens has shipped the statues as far away as Paris, France and Azerbaijan.

She also helps customers who want to celebrate specific films.

“I enjoyed an order the year the movie Titanic came out,” she says. “The client was having a party, and I made cruise ships for each person, as well as a large block of white chocolate that looked like an iceberg. She placed it on a mirror on her table.”

Stephens’ bank of about 5,000 molds made from food-safe plastic makes it highly likely that she can turn out whatever shape her customers might want:

“I have an artillery regiment in Kansas City that orders chocolate cannons for their event every year,” she says. “The (chocolate) handguns have been ordered by a group in Atlanta who holds a concealed-carry convention every year.”

Business gatherings have plunged in the past year because of COVID, and that has taken a huge bite out of Stephens’ sales. Her business is down 75 percent, but the remaining 25 percent is enough to keep her melting and pouring.

The raw material is a chocolate base that comes from a supplier in 50-pound cases. She liquifies the tear-shaped, chocolate discs in melters that hold the molten mixture at a steady temperature while she dips and pours.

The chocolate takes 10 to 20 minutes to set up, and it keeps for three to four months. Stephens uses no preservatives.

There’s not much need; her creations disappear quickly, though not by her own hand, which answers one of the most common questions she hears: Aren’t you tempted to eat your work?

“At work, I’m thinking of food like chicken, burgers; nothing sweet,” she says. “I have a tendency to want chocolate at home, but I just don’t take it home. It’s rich, and you can’t eat tons, plus if I’m sitting around eating it, I just have to make more.”  OH