Originally serviceable but small and confining — as in minimal counterspace and outdated appliances — the kitchen was hardly ideal for Casey’s vision.

You see, as a passionate cook and food blogger, Casey documents her culinary adventures on Instagram, drawing inspiration from the Italian dishes made with love and real butter by her grandmother, Nonnie. Because she shares her gourmet creations with followers, she needed a picture-perfect workspace.

Though she didn’t design it as a true test kitchen, Casey visualized how white, veined quartz counters (a resilient stand-in for Carrara marble) would look when staging food photos. She would need ample natural light, ample space and a fabulous gas stove — all of which now define the kitchen. 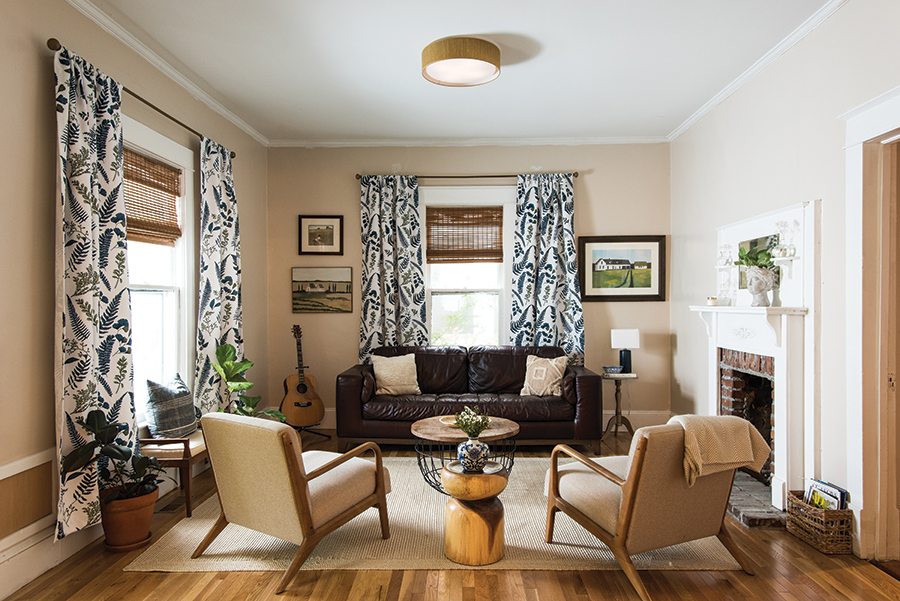 Brian? All he asked for was a bar sink, wine fridge and a stretch of counter reserved for entertaining.

“I have no power in this relationship,” Brian jokes, “but I held out for this,” he says, patting the bar sink. “I get to use this sink.”

The couple dissolves into laughter.

“You have power in the relationship,” Casey retorts, “it just does not extend to the kitchen.”

But for the time being, the bar sink has mostly served as a station for washing out paintbrushes. Brian and Casey have devoted much of their free time over the past year to painting and refinishing the home’s interior. They have done much of it alone.

Theirs is a compressed, impressive saga.

But it didn’t begin in the kitchen — it began in Nashville, where the couple cooked up a dream of relocating to North Carolina, where Brian had grown up. Less than two years ago, after interviewing with Freeman Kennett Architects, they found a two-story in need of all their talents and within walking distance of the firm. 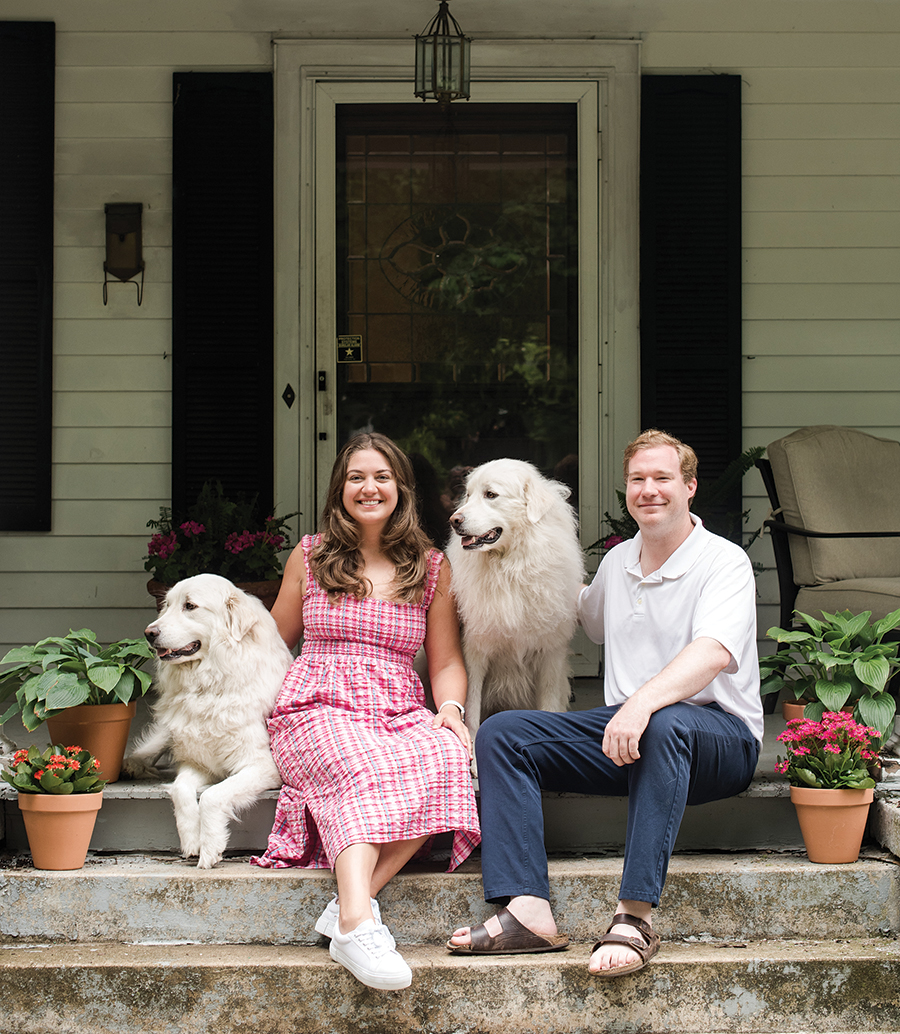 Three leafy blocks of this residential corridor offer all the classic elements of Americana: generous, shaded porches; wide sidewalks; a variety of architectural styles; plus easy access to restaurants and bars. In other words: eye candy for architects.

It also felt like a lifestyle upgrade, going from “seven miles, but a 45-minute commute in Nashville to walking to work in a snap,” Brian says. (He does admit that he wouldn’t cross Main Street from his Emerywood family home as a kid. “It seemed too busy,” he says with a laugh.)

Brian’s father is a Triad surgeon, and his mother a lawyer and educator.  Casey’s father is in technology and her mother is a chemical engineer.

As anyone who has ever loved and restored an old house can understand, the biggest reach for the Cheeks was knowing that this was the house. Once decided, they had to figure out how to a) nab a historic house from “on the edge of foreclosure” that had languished in an estate for two years, b) plan a wedding and honeymoon, and c) reinvigorate an old house with new life.

With the help of friends, family and sheer good fortune, “We got the house a little over a year ago,” says a still smiling Casey.

But preceding that, a dizzying timeline unspooled. 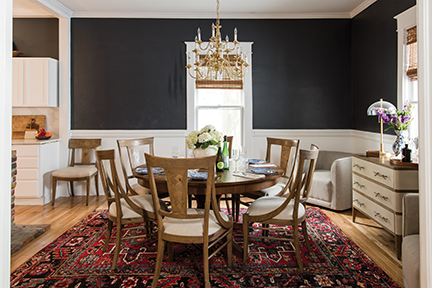 The Cheeks were married on September 29, 2019, then sealed the deal on their new historic home while returning to the U.S. from a trip to Mexico. Or rather, Brian’s mother did.

“I got a text as we were in the airport in Atlanta,” Casey recalls.

She marvels at the cascade of events. “Brian turned 30, we got married, and we closed on a house all within two weeks.” With a grin, she adds, “It was so cool!” 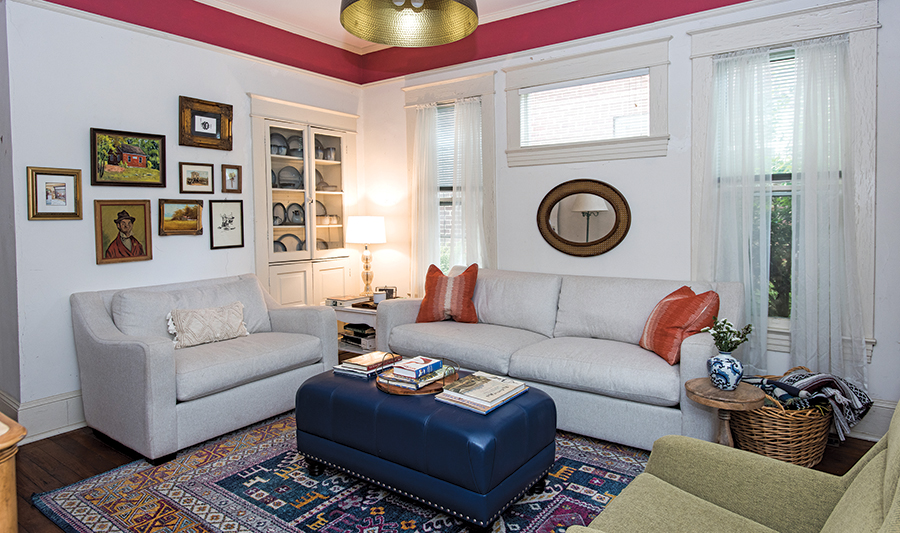 In December, the Cheeks left Nashville, where they had worked for four years following graduation from architectural school at the University of Tennessee, which is where they met. After unloading their belongings at their new home, they took off for New York, where they would spend the next two weeks enjoying a culinary holiday with Casey’s family. There, Casey further mastered Italian dishes with her grandmother, Nonnie, an accomplished cook.

Next, they flew from New York to Prague for what they call their “big honeymoon.”

The newly married architects drank in the city’s splendor and enjoyed cocktails that were cheaper than bottled water.

They returned to High Point in January 2020, eager to begin new jobs and tackle a renovation.

Given their architectural training, they had the remodel and design concepts in mind in no time. But as the crew began a partial gutting of the kitchen, and walls fell away between the kitchen and dining rooms, a revelation. The couple noted the “beautiful, organic look” of a fireplace and chimney that had been previously slated for demolition.

Brianagreed, they couldn’t destroy it.

They feverishly revised plans and set to work out how to make the most of what they unearthed while removing a minimum of walls.

The dining room retained a built-in hutch and was reconfigured as a den/dining room, where Brian’s sketches hang on the wall.

The house had good bones.

“I love me some symmetry,” Casey playfully adds, which is one reason why she and Brian were drawn to the foursquare from the start. But to find just the right house, she began her search before leaving Nashville.

She noted one had been sitting on the market. The house had gone to auction and didn’t sell. Then a friend in town helped them navigate the issues with a house in an estate. They put an offer in before they were married, says Brian.

After their three-part honeymoon and moving into their historic home last January, they didn’t really delve into the renovation until March 2020, as COVID hit hardest. In sequestration, they worked at Kennett Freeman remotely. After the workday ended, they began remodeling.

“We have ‘before’ shots of the overgrown azaleas,” says Brian.

They hired a backhoe, and “went crazy” ripping out the front then backyards, which were choking in overgrowth. Suddenly, the house emerged from a wild tangle of greenery, thrilling them.

Initially, they tackled cosmetic things that were easier to do solo. Most of the rooms were a garish white, though the stairwell and one room were red. They focused on the three main rooms downstairs, and softened them with the most cost-effective, unifying change to come: a coat of Natural Linen by Sherwin Williams. 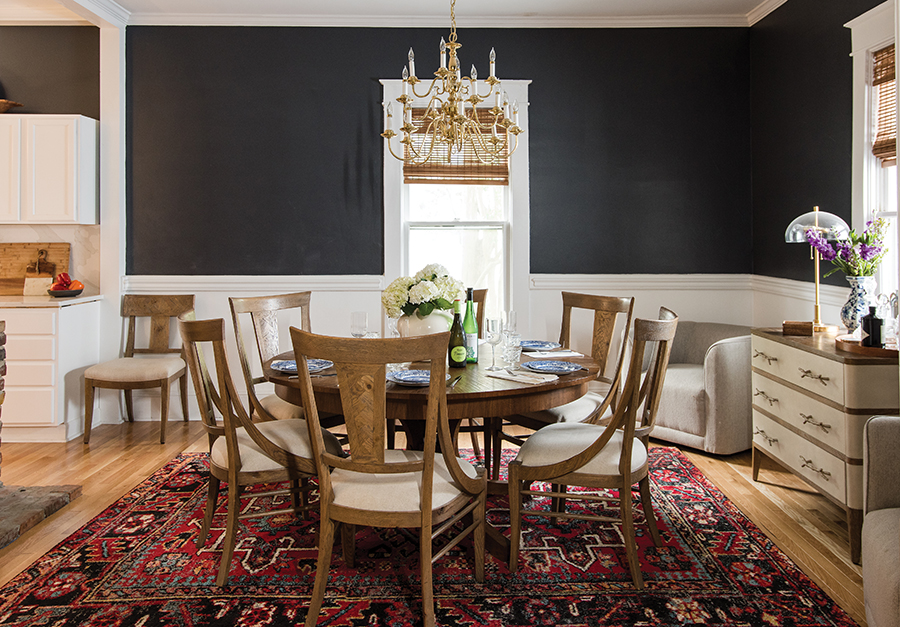 Then they installed new kitchen cabinets. By using standard cabinet sizes, they were able to configure wood cabinetry at a hefty saving.

The kitchen gained natural light, enhanced by being opened up. For the walls in the kitchen and dining room, they chose Benjamin Moore’s dramatic Bleeding Heart “to make things fade away a bit,” says Brian.  The color was forgiving, especially with areas where the plaster was irregular or repaired.

The trim and cabinetry were painted white.

“It gets so much light,” says Casey of the kitchen. They installed the long dreamed-of quartz surfaces.

“We were so proud of it, we were inviting all our friends,” Brian says, even as things were in flux. “Having a front porch! It was a different vibe.”

The house was ideal, too, for two large dogs.

“We saw them on Craigslist while living in Nashville,” explains Brian of their Great Pyrenees dogs, Dolly Parton and Del McCoury. “They were small enough to fit in my hand,” says Casey, but in two weeks they quadrupled in size.

In the Nashville house, the couple and dogs “were all on top of each other,” says Brian. There was no space, and therefore, sleep was challenging. Brian imitates Del’s heavy breathing, snuffling and laughing. 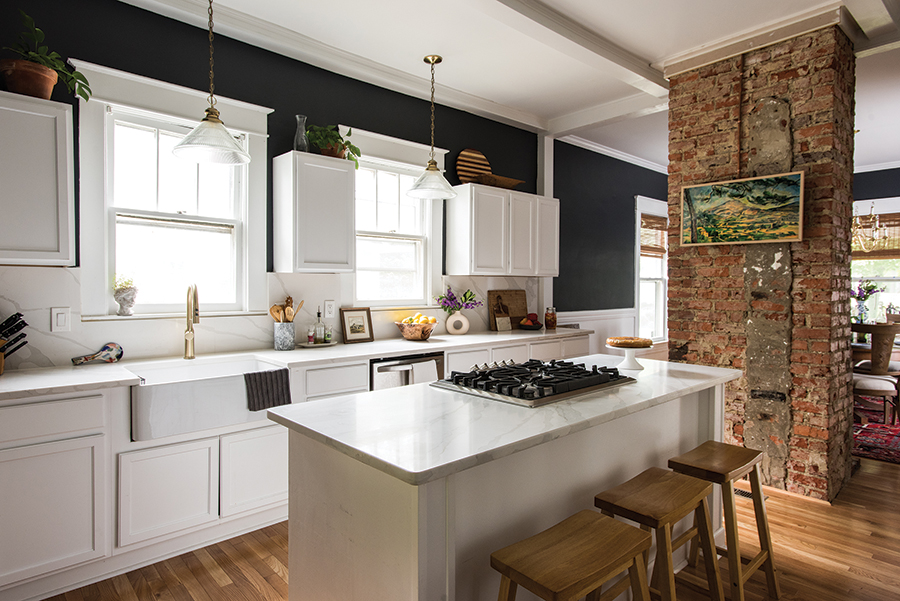 Now, one dog sleeps on the stair landing, and the other sleeps on a downstairs sofa. “It’s wonderful,” says Brian.

But the happier fact was that Brian had long felt the tug of home and a desire to return to High Point.

“A lot of us are moving back,” says Brian.

“Everyone’s leaving the big cities because of COVID,” adds Casey.

Commuting in a large city was crushing.

“Now we come home and let the dogs out and feed them,” he adds, without the stress of trying to get home yet being stuck in traffic.

At the end of the workday, the Cheeks rolled up their sleeves. They tackled a large patio area and paved it, using bricks found at the rear of the house, likely the remnants of a Charleston style garden. They reused both old bricks and pavers and other pieces excavated as they worked to create additional terracing, with a new seating/entertaining area. 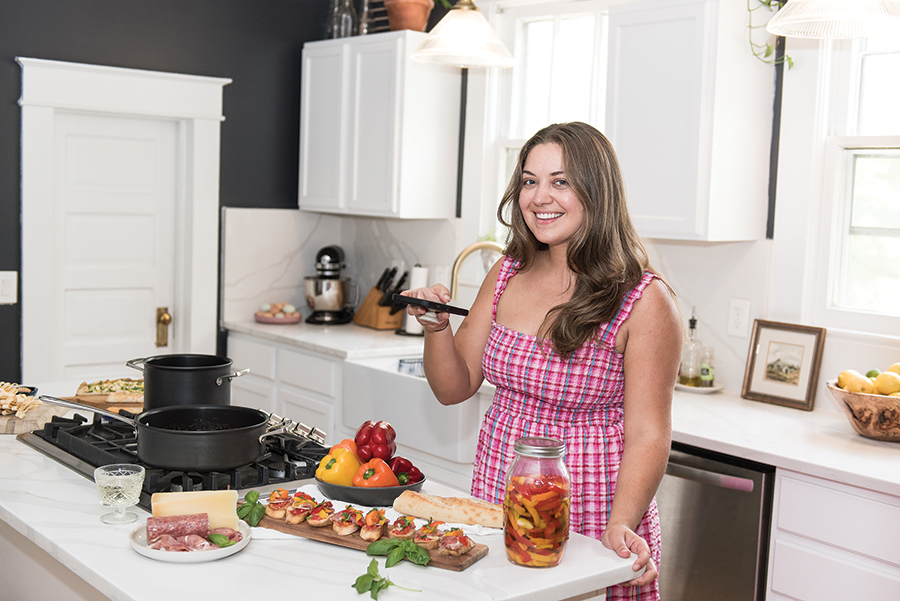 “It was a rush to get all this done — the retaining wall and knee wall,” says Brian, pointing out their outdoor project.

“We were worn out,” adds Casey. A major holiday approached.

By Easter this year, they hosted family, and also held a best friend’s wedding after completing the patio. (The friend’s venue had been cancelled due to COVID. They invited them to have a small gathering in their newly re-done back garden.) 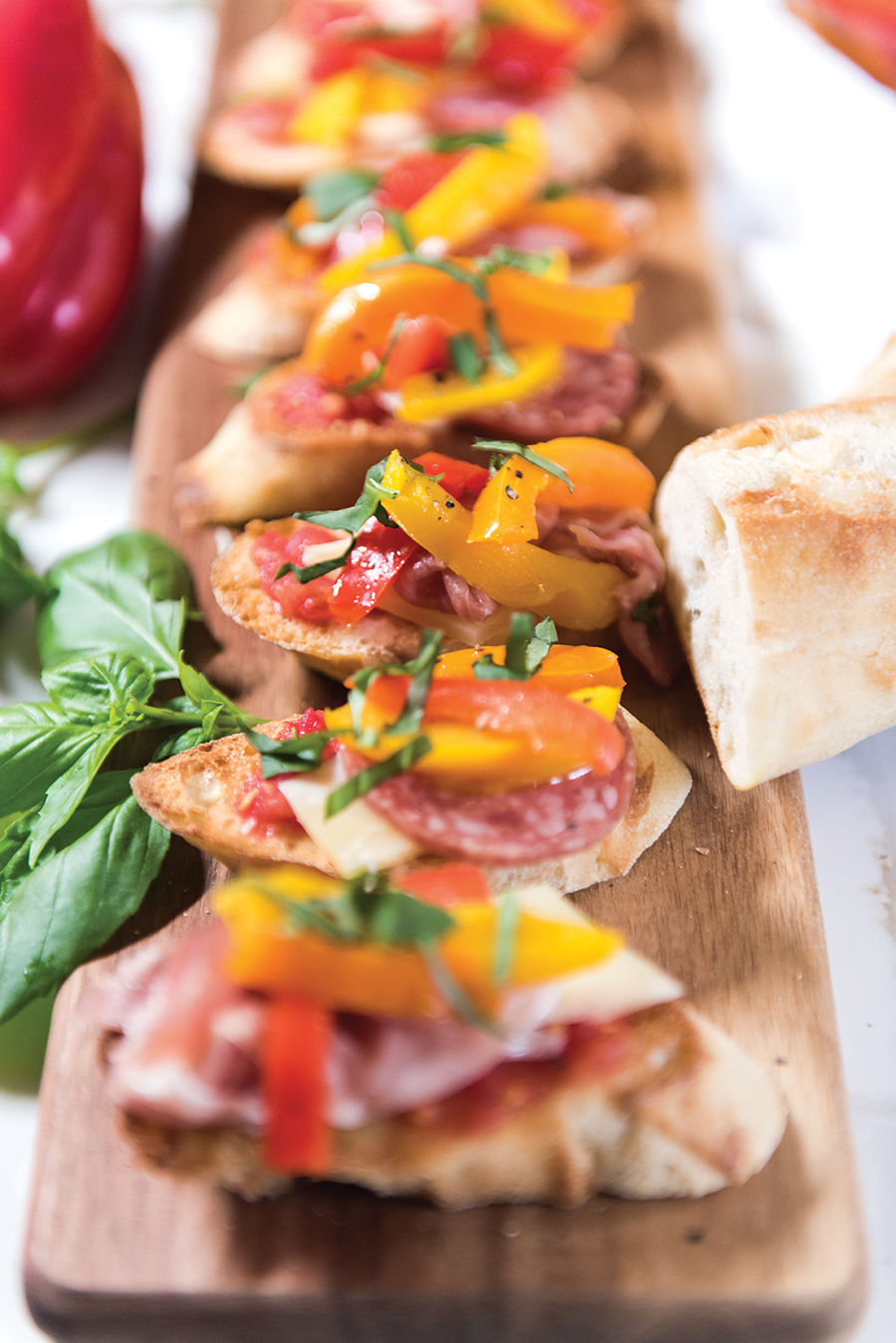 Easter was the first test of their new kitchen and layout.

“We had 20-plus people,” Casey exclaims. Nonnie’s arrival completed the joy for her. “I think my grandma cooked on this stove the first time.”

They continued feasting and prepping food. Casey made mushroom risotto and chicken cutlets with Nonnie. “Pickled pepper, roasted eggplant and tomato pasta. The food was flowing that weekend.”

Casey immersed herself in the joy of Italian cooking and their newly blended families.

Casey shows a picture of Nonnie grating an enormous wedge of parmesan. It thrills Casey that her grandmother has now cooked in this very kitchen, a good glass of red on hand.

“My grandmother was the one to pick us up after school. Dinner was ready. Our parents worked. She was at the house, cooking classic Italian, every single day,” Casey says, marveling.

“Instead of candy, we got chicken cutlets.”

Away from her grandmother at college, Casey would experiment in the kitchen on her own.  “She doesn’t cook with measurements,” she says of her Nonnie. “Everyone in our family gets so frustrated [trying to replicate her recipes]. So, I started recording her, making reels on Instagram.  Hers always tastes different.”

When Casey presses Nonnie, one thing is predictable. “Her answer is always, ‘you’ve got to use more salt.’ She’s from northern Italy, so she uses butter, versus olive oil.”

Cooking ace Casey has summed up exactly why her segue from the North to the South was so seamless: Salt and butter, fundamental culinary staples of her adopted home.

“I thought I’d love the South,” she adds happily. And she does.

Cynthia Adams is a contributing editor of O.Henry.