A cure for grumpy old men

This time of year in Blowing Rock, when visitors jam sidewalks, hiking trails and trout streams, a grumpy old regular like myself can start to nurse a grievance.

Midst the bustle, I resent the tourists’ mutts all sporting better haircuts than mine.

Then, like the Balm of Gilead, rhododendrons turn grievance to delight.

The rhododendrons paint neighborhood streets, parks, escarpments and hollows with purple, pink or orange hues. Listen, and you hear the drone of pollinators. Lean close, and you savor the delicate fragrance.

“I shall never forget so long as I live the day we discovered that plant,” John Fraser Jr. commented to the biographer of his father, John Sr., the Scottish botanist credited with finding and cataloging hundreds of North American native species.

In 1799 young Fraser accompanied his father on his sixth voyage across the Atlantic, another expedition in search of plants that could be taken back to England, propagated and sold through the family business.

“We had been for a long time traveling among the mountains,” Fraser said, in “a fog so dense that we could not see further than a yard before us.”

As the Frasers reached what was likely the peak of Big Bald Mountain, “the fog began to clear away, and the sun to shine out brightly,” Fraser continued. “The first object that attracted our eye … was a large quantity of Rhododendron catawbiense in full bloom.”

In natural areas the extent of the rhododendron thickets — sometimes called “hells,” a term that quickly feels apt if you’ve ever tried to make your way through one — can be surprising, especially given the dizzying slopes the thickets often cover.

Rhododendrons are especially effective at colonizing places that are — well, between a rock and a hard place. After a rockslide, for example, they will be among the first plants to take root in the rubble and debris.

Each year Grandfather Mountain hosts an event called “The Remarkable Rhododendron Ramble,” a celebration of summer, when guides lead guests on 20-minute hikes to observe the splendid array of blooms and learn about the history, characteristics and importance of rhododendrons in the mountain’s varied ecological domains.

This year the daily Rambles are scheduled for 2 p.m. from May 28 through June 4. The culminating event, according to Landis Taylor, assistant vice president of marketing and communications with the Grandfather Mountain Stewardship Foundation, is an “All-Day Rhodo Ramble on June 5.”

Activities that day include 20-minute Rambles on the hour starting at noon through 3 p.m., along with kids’ crafts, information tables and “a special presentation given by a staff naturalist who specializes in botany,” Taylor adds. All these programs are included in the regular price of park admission.

Since there is nearly a 1,000-foot change in elevation from Grandfather Mountain’s base to its peak, visitors have a wide window of opportunity to see rhododendrons in bloom in different park locations.

Most plentiful on the mountain is the same one first noted by the Frasers more than 200 years ago, the -(R. catawbiense). Its deep purple blossoms appear from early to mid-June — depending upon the elevation — and can be found all along Grandfather Mountain’s trails and main road.

But there are other native species that can also be seen. 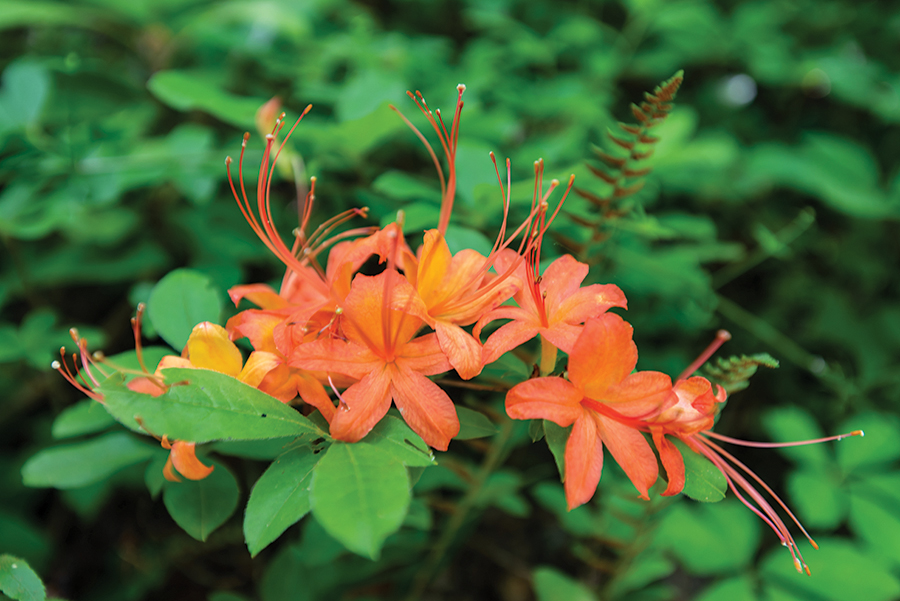 The pink-shell azalea (R. vaseyi) has a delicate pink blossom and can be found growing on the mountain in late April or early May, just before the Rhododendron Ramble. It can be seen at the Half Moon overlook, as well as at the Forrest Gump Curve picnic area.

Rosebay rhododendron (R. maximum) displays very light pink flowers and typically blooms in late June, though usually a few show blossoms during the Rhododendron Ramble. Linville Bluffs, across the park’s main road from the Wilson Center for Nature Discovery, is a prime spot to take them in.

But to my mind, the most spectacular of the rhododenrons is the flame azalea (R. calendulaceum), ranging in color from yellow to orange to peach or red. You can see it at Grandfather Mountain’s entrance gate and at Split Rock in late May through July.