In spite of its name, the nimble American redstart usually
appears as a flash of orange

Whatís in a name? For one, misleading descriptors, especially where bird names are concerned. Take, for instance, the American redstart. Although it is indeed found in the Americas, it is hardly red. Nor is it related to redstarts found in other places across the globe. The adult male is mostly black with splashes of orange on its breast, wings and tail. Females and young birds have corresponding yellow patches but are a more muted olive and gray. Both males and females blend in well against the foliage of the hardwoods they frequent in spite of their striking plumage, it can be quite tricky to spot the males. Their rapid movement, as they flit to and fro after insects, certainly adds to the challenge.

American redstarts have an unusual strategy for finding food. These tiny insectivores display what appears to be nervous fanning of their tail and wings. But the flash of color is apparently an effective means of startling prey, which they will then swiftly lunge at and consume with incredible speed and precision.

Redstarts are common migrants through the Piedmont and Sandhills of our state. The rare redstart that breeds in North Carolina can be found as early as the first week of August. Migrants on their long way to Central America will still be trickling through in late October.

You can spot them clustering in small groups or mixed with migrant vireos, tanagers or other species of warblers. As with so many of our songbirds that winter in the tropics, these birds follow the southern coast of the United States down into Mexico in the fall. However, come spring, they head out and cross the Gulf of Mexico on their journey back north. They need to almost double their weight to survive the trip. Twelve or more hours of nonstop flying over open water is certainly a grueling test. Although they may alight briefly on ships or oil rigs along the way, it is a long haul.

Interestingly, some American redstarts breed as far south as in the bottomlands of the Sandhills. But they are more likely to be found in open woodlands north of the clay line. In the United States, they prefer larger wooded tracts, which are increasingly harder to find. So it is no surprise that the bulk of pairs nest well to the north nowadays, across much of Canada. Another noteworthy detail: Some males of this species are polygamous, which means a lot of extra work since they may fly as much as a quarter mile between families during spring and early summer.

This species is one of a handful in which males do not attain adult plumage until the end of their second summer. Although they do sing prolifically their first spring, it is unlikely they will succeed at attracting a mate until they acquire the distinctive black and orange feathers of maturity.

So should you hear a high, squeaky chip note or catch sight of a tiny flash of color high in the trees this fall, take a closer look. It just might be an American redstart.   OH 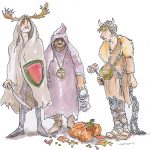 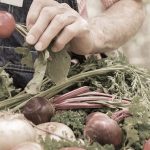