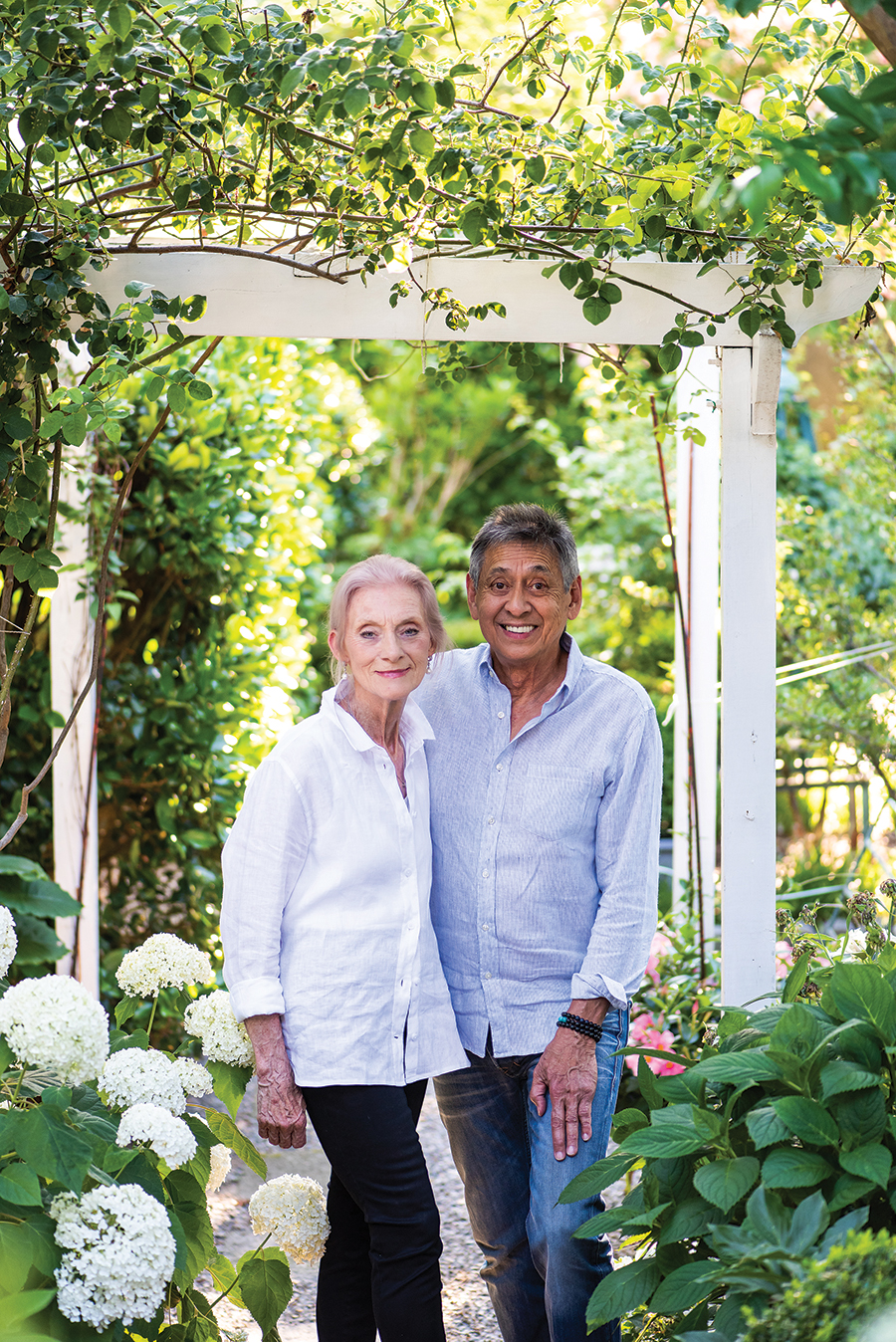 Certain houses, even sadly neglected ones, possess a transcendent something or other.

And some people can sense when a house possesses good bones and can be coaxed back from an insidious decline to a miraculous resurrection.

Billy and Lynn Lee are like that, visionaries who are equal parts artist and restorationist. Billy is a renowned sculptor and UNCG professor emeritus of art, while Lynne is a former textile designer. Together, this formidable duo possess the eye and the dogged tenacity to take on the seven deadly sins of ailing houses — dropped ceilings, peeling walls and moldering floors just for starters — plus issues beyond the visible.

Having spent years in Britain immersed in art and architecture, the Lees acquired a weakness for ailing houses, particularly charming older ones. 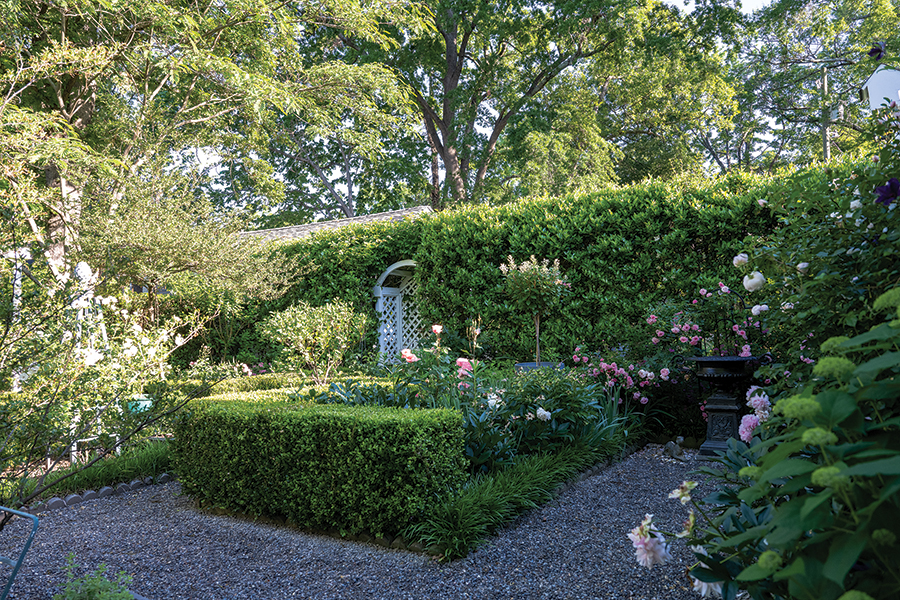 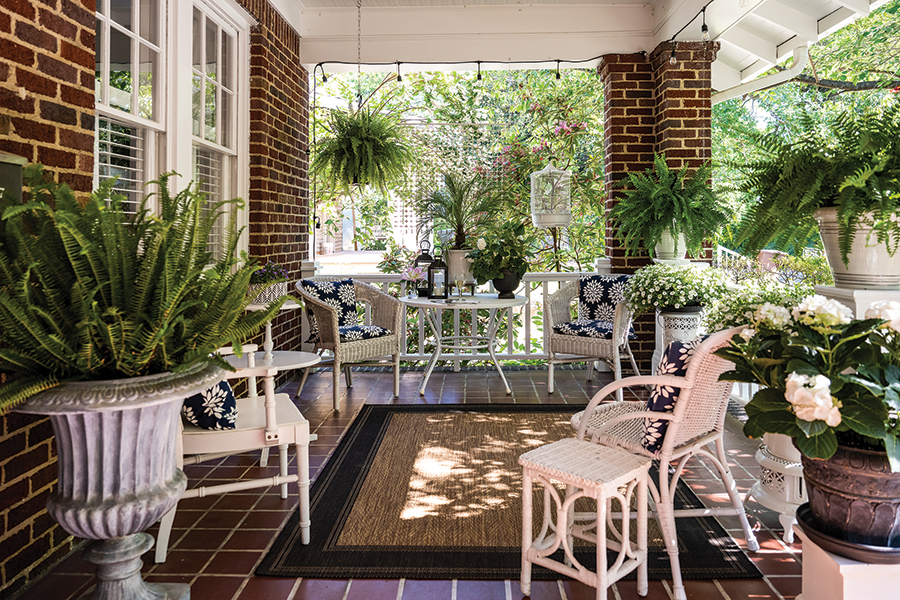 Across town from the Lee’s former home, a languishing Fisher Park bungalow awaited restoration. House rehab, even CPR. Having suffered a serious drubbing from neglect, it somehow, despite all, conveyed possibilities.

The red brick house with, of course, an inviting front porch sat close to the street, one defined by the district’s signature granite curbing.

Yet the bungalow’s best qualities were hidden. For most potential buyers in 1994, the listing sent off-putting distress signals. (I know, having seen the house while house hunting that year.) Not for Lynne.

“I like the feeling of the house,” Lynne says. “From the outside, it looks like a modest, unassuming house. People walk by and don’t even notice it. Inside, it’s a surprise. The rooms are lovely, big.”

Nonetheless, it was besieged with a host of challenges, but none beyond the Lees’ combined talents. 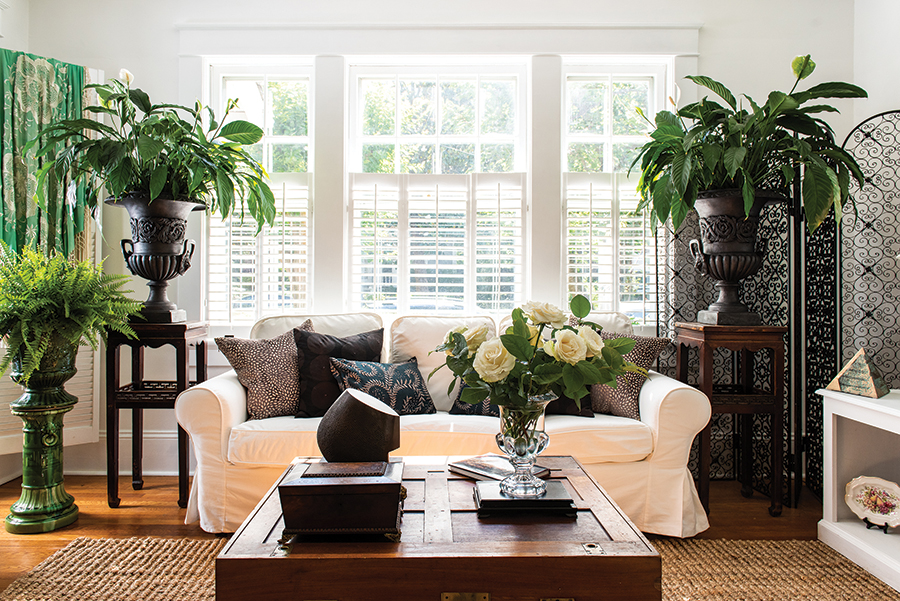 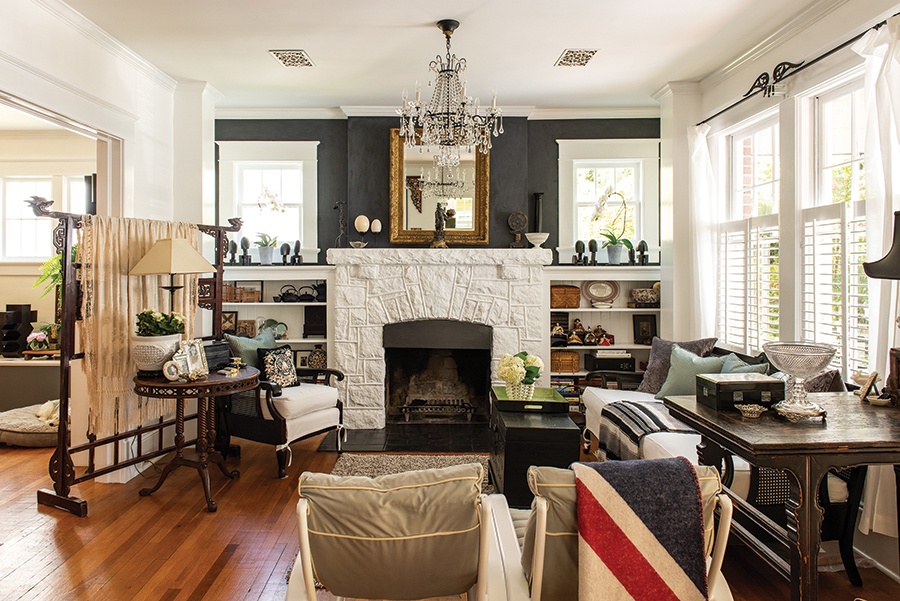 Inside were layers of paint, unsightly sprayed ceilings and the remnants of its student rental past. Clunky dead bolt locks defaced interior doors, and some of the original interior French doors had been removed. Like a lot of bungalows, it had only two bedrooms, one full-sized bathroom in need of repair and another half bath — stranded all the way out on the back porch. The kitchen was woefully dreary and, like everything else, needed attention.

Yet when Lynne was shown the house by her real estate agent, she picked up on something ineffable.

She loved the location. Even as an avid gardener, Lynne was not put off by the tiny front garden, nor by the rear garden, lacking privacy, which had a ramshackle garage and old iron swing. And yet . . . this was a place she could love.

The bungalow was everything their former house was not.

It had possibilities and history.

According to the National Register nomination and city directories, the house was originally built between 1920–24.  Additionally, records shared by Mike Cowhig, a neighbor of the Lees who works in historic preservation, indicate the original occupant was Harry Marks, a merchant who owned the Fashion Hat Store and O.Henry Shirt Company. (In 1939, Marks got into hot water, facing the Federal Trade Commission over accusations his shirts were not preshrunk as advertised.)

Also, the nomination noted that bungalows were the most popular and prevalent house style in Fisher Park, where 145 were built. The half-mile-square district also featured 60 foursquares, the next most popular style — but bungalows dominated.

The Lees were ready to ditch their home — “A new build. A small house,” according to Lynn — and go. 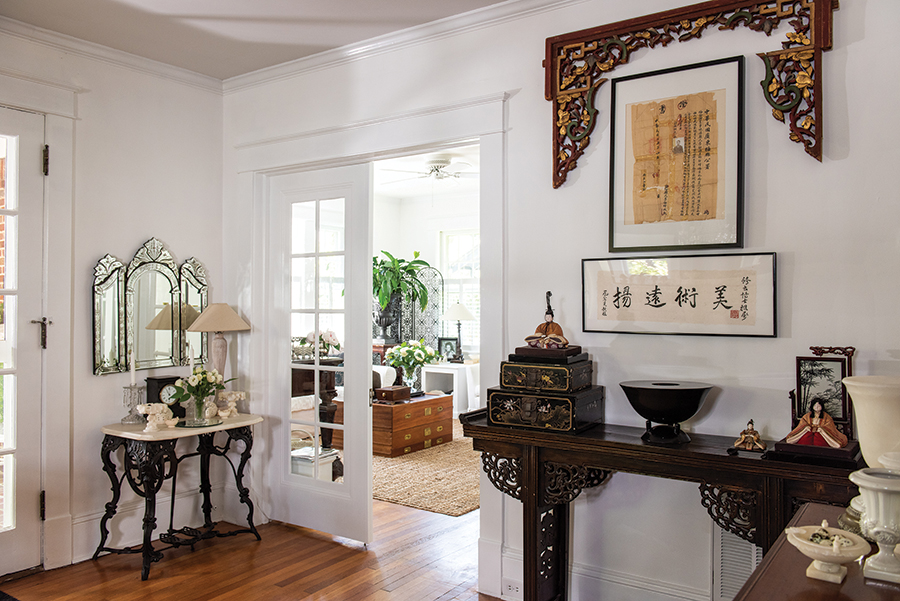 That “new” home, convenient to daughter Chloe’s school, was too new.

Worse, the deck had revealed a disconcerting problem — rot! The Lees were disillusioned that such a new house was sprouting old house problems.

With Chloe soon to finish school, there was no reason not to look elsewhere, preferably in established neighborhoods.

Lynne recalls beginning their search in earnest. “Our real estate agent took us to four or five houses that day.”

Finally, their agent showed Lynne the bungalow. “When she showed me this house, I said, ‘This is it!’  I knew that, even though it was in a horrible state,” she says.

When she later returned with Billy, he agreed with her assessment.

They saw the same underlying potential: a good interior layout, good light and good bones, in an ideal location.

Where anyone else might have bolted, seeing only problems, they felt a pull. This house needed them.

Born on opposite sides of the world, they both arrived as undergraduate art students at Birmingham College of Art and Design in Great Britain with ambitions to excel in the arts. Billy was from Uitenhage, South Africa, while Lynne was born in the U.K.

Billy completed graduate school at the Royal College of Art in London.

“We got married in London before we came over,” says Lynne with a still perceptible, plummy British accent. Billy earned a prestigious Kennedy scholarship to MIT, bringing the couple to the United States.

The Lees formed a creative and artful lifelong partnership. When Billy joined the art faculty at UNCG, they got to know the Gate City.

“Chloe was a little girl, age 7, when we came here to Greensboro,” says Lynne. “We used to go to Fisher Park, taking a picnic, and she would play in a stream.” The fixer-upper was within walking distance of that stream. 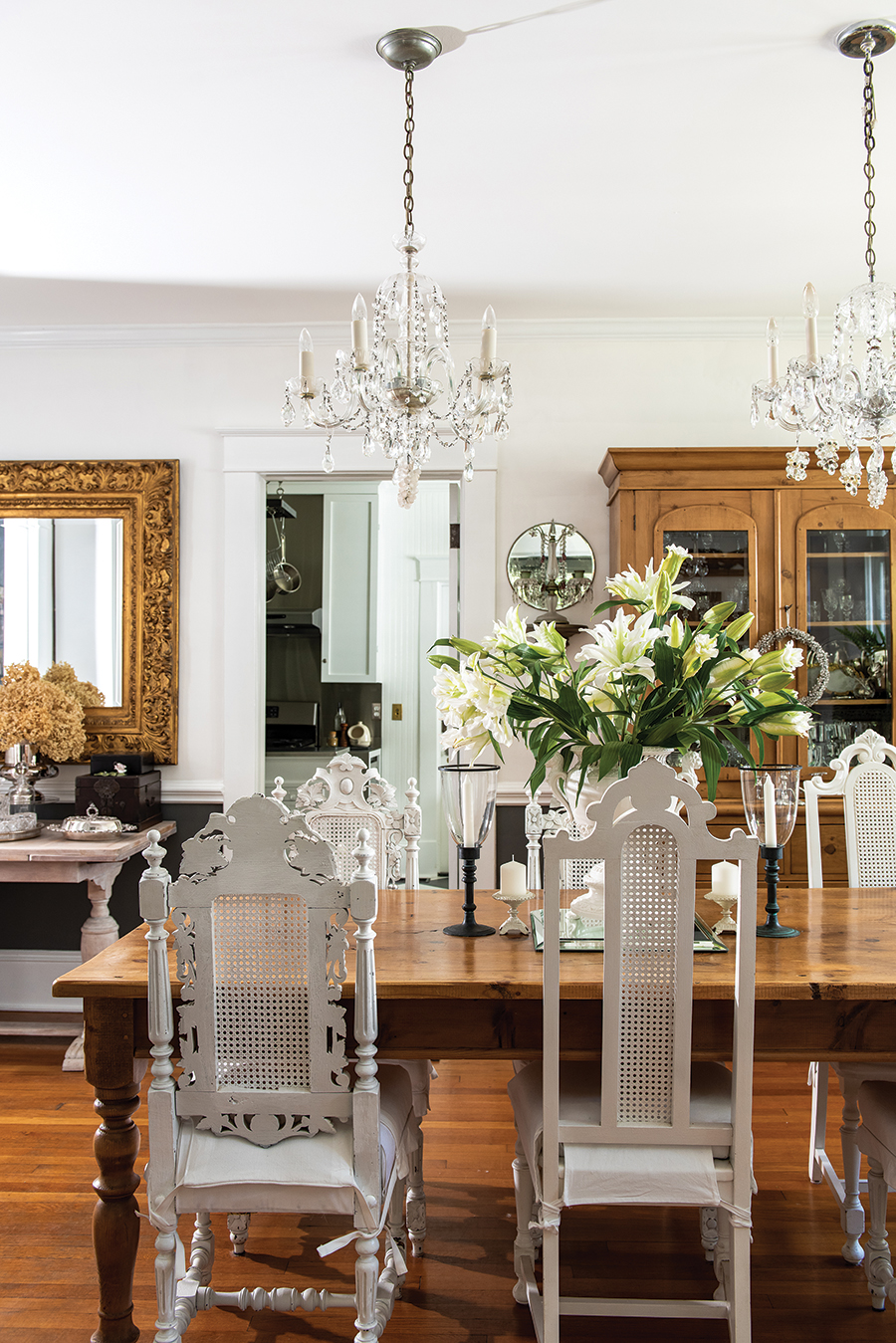 “We moved in, redoing downstairs first.” Chloe, now a teen, had the upstairs floor.

Lynne recalls redoing the full bathroom as an early project: “There were only one-and-a-half baths,” she recalls. “It was awful!”

Give-and-take ensued. Initially, Lynne wanted to paint over the exterior red brick, but Billy disagreed. Lynne disliked the living room fireplace, but removal would have cost thousands. So, they whitewashed it.

Stonemason Andrew Leopold Schlosser probably did the stonework, Lynne confides.  (And, yes, that was the great-grandfather of O.Henry’s former contributing editor Jim Schlosser.)

Whereas Lynne originally wanted it banished, she’s now glad it stayed.  “There were other things we needed.  And I like it now.”

She enumerates stages of renovation. “We started work on it, putting in four new ceilings downstairs because somebody had done that textured stuff,” says Lynne, cringing.

“We replaced all the ceiling moldings. We did it all ourselves.”

“We wanted to make changes but in keeping with the original house,” says Lynne. Once you start major changes such as knocking out multiple walls, she says, it’s easy to “lose the original feeling of the house. And that’s a shame.”

Scraping, planing, priming, even plugging holes left by the many dead bolts, a vestige of the rental years. 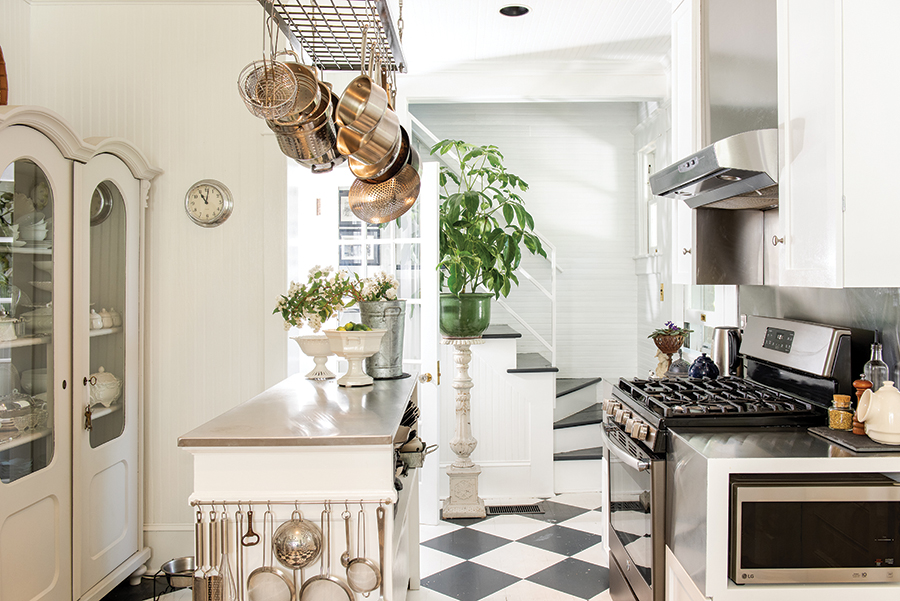 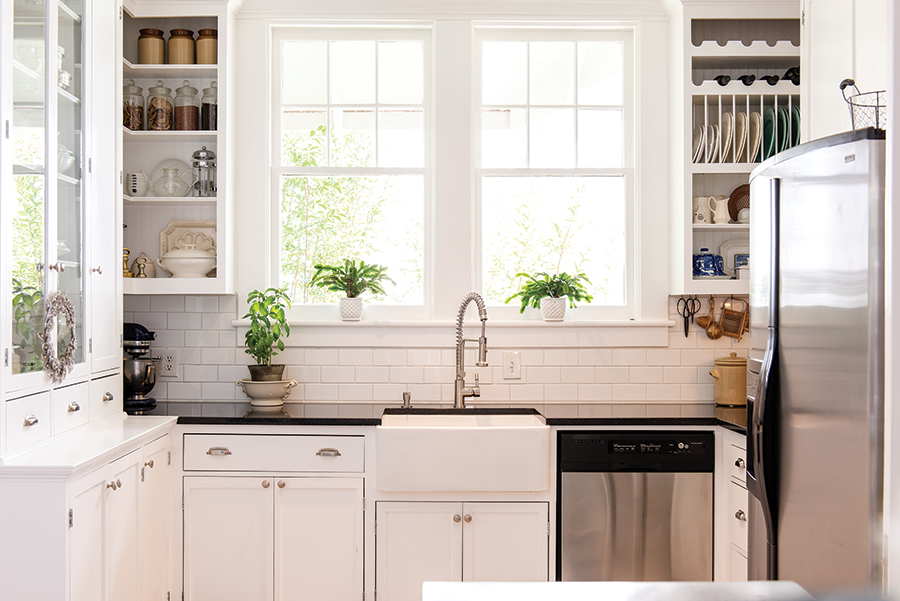 “The woodwork in this house had about 12 layers of paint on it.  We did it room-by-room.”

“Billy even took out the window frames and planed them down to restore them.” Every cabinet and feature in the course of renovation was the duo’s design and handiwork.

They kept the footprint. Originally, “the kitchen was formerly a pantry, small dining nook and a small kitchen.”  It didn’t make sense, says Lynne, to have three separate, very small places.

“Billy couldn’t work during school time,” says Lynne. He worked during summers when he had a block of time. “So, we did the kitchen in two parts,” says Lynne.

“The first year, we knocked the wall down. The second year, we redid the other half of the kitchen.”

Billy built new kitchen cabinets that extend to the ceiling. He poured concrete countertops, which emulated stone.  Despite really liking them, “Eventually, though, they broke down — perhaps because they required sealing.” They replaced them with quartz.

She would sketch out her ideas, and Billy would execute them. As a sculptor, he was adept at creating and building structures, including custom cabinets in the dining room.

“We redid the utility room, raising the porch roof,” Lynne says.  A downstairs half bath beyond the kitchen received a makeover.

They never regretted buying their little bungalow, even as the projects expanded and demanded Billy’s summers and free time.  Step by step, the Lees redid everything themselves, “except the electrical wiring and plumbing.”

Was there a moment when they thought, We can’t do this?

“No. I don’t think so. Never,” says Lynne firmly.  Their home and garden became their canvas.

And there was enough affection and excitement to see it through.

As time allowed, they planned an en suite bath for Chloe’s upstairs’ aerie, which ran the width of the house. 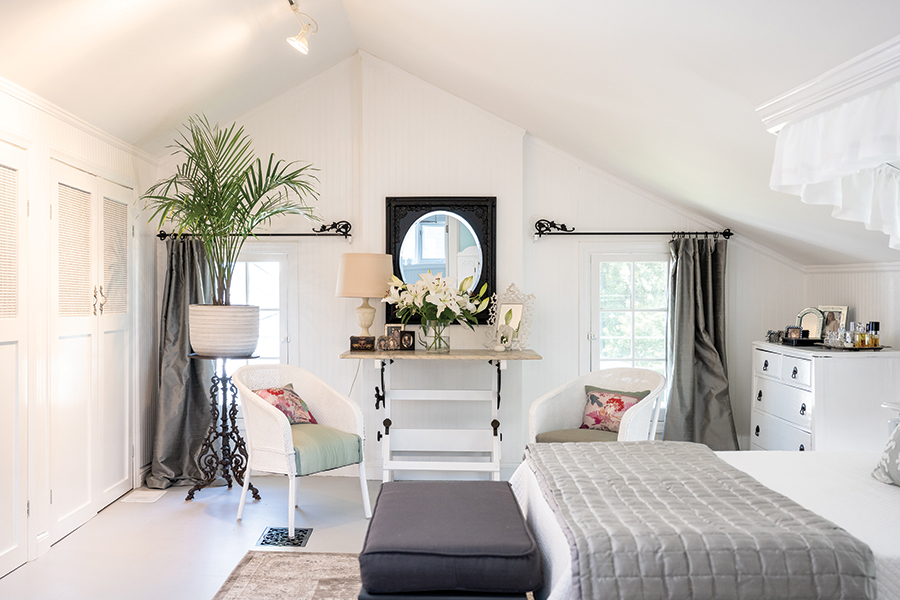 They had taken care to orient the bed and canopy on the slanting ceiling in such a way that light could still flood the room. Building a standard wall and door for the new bath might block incoming light, which Lynne considered to be the space’s best feature.

“Billy sandblasted the glass in the door to allow for light,” Lynne says.

They “already had a clawfoot tub we had found in Raleigh,” says Lynne, who sometimes goes upstairs to read, now that Chloe is married and living in the Triangle.

The radiant home of two artists, its magic has been completely revealed.

The interiors, replete with custom built-ins, cabinetry, radiator covers and even original crystal door knobs, are like an art installation.

Unable to resist them when Lynne goes to the grocery, there are always fresh-cut white flowers out, lilies or roses, in creamware or crystal.

Then there are the garden’s outdoor rooms. Billy created a unifying structure of elevations, pathways and beds. A decade later, he added impressive hardscaping: fencing, trellises, arbors, a pergola and table, even steel tuteurs for the roses, all made by Billy’s two hands. 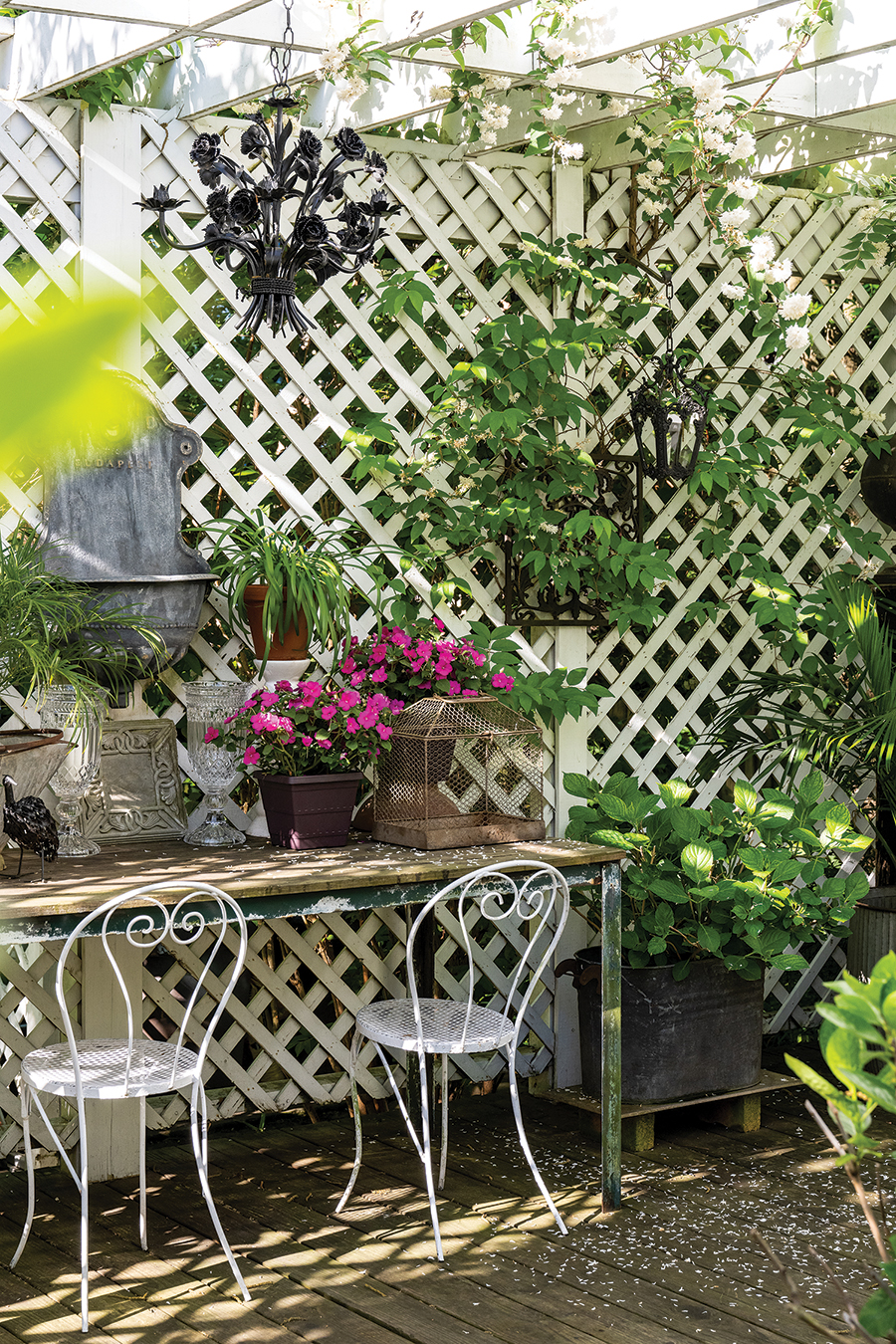 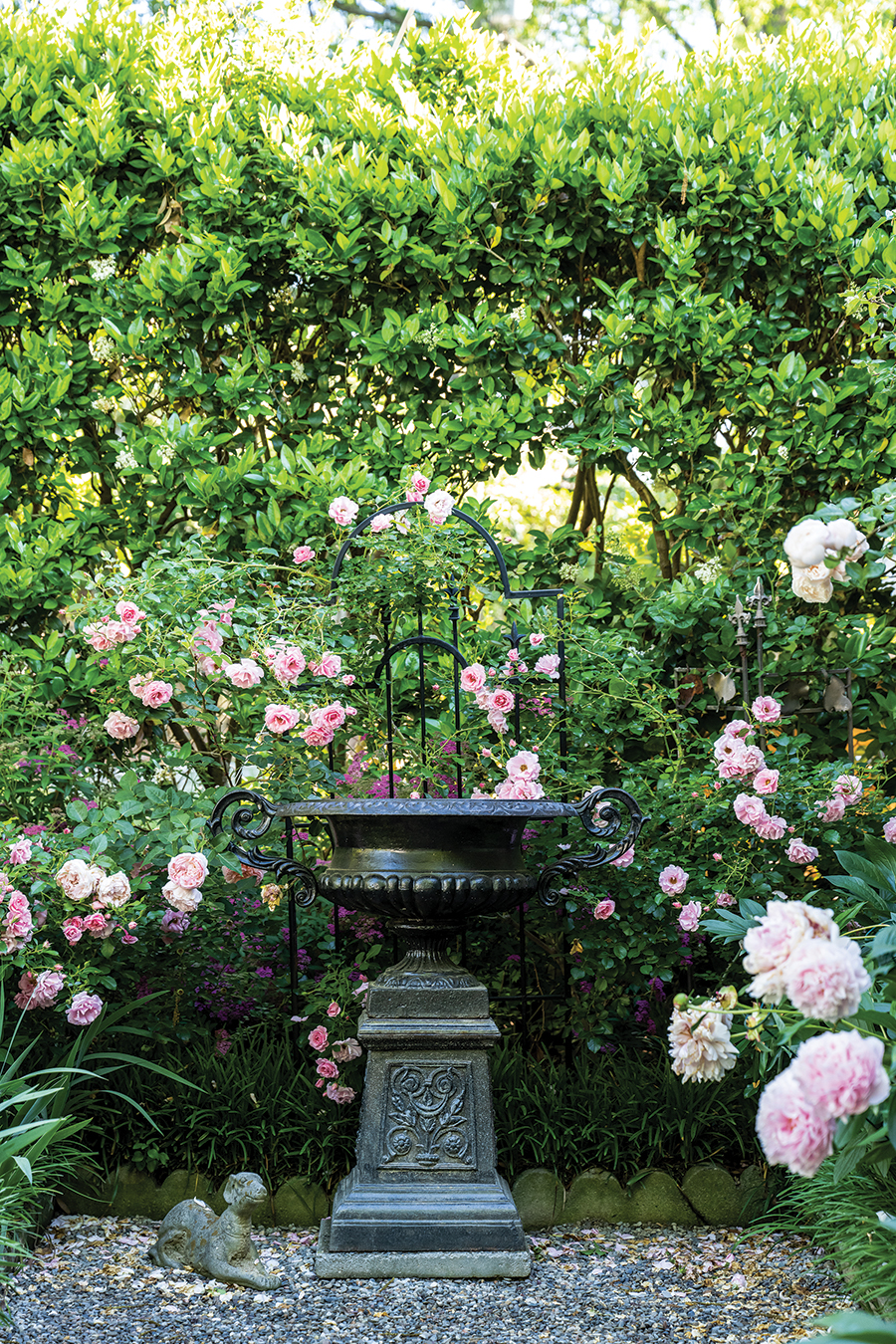 The plantings mean a constant blooming palate, from roses and tree peonies in spring giving way to plumbago, hydrangea and annuals in the summer. Lynne masses plantings of bearded irises, garden phlox and lilies. Potted citrus trees — which winter indoors — grow lush outside over summer.

In 2004, their garden was featured in Garden Homes and Outdoor Living. “By placing tall plants and structures strategically, it became a three-dimensional space — like a home without a ceiling,” the writer enthused. “Billy’s forte is structure with the garden; Lynne is the planter.”

For all her gardening devotion, Lynne isn’t a purist. She doesn’t care about the Latin names for flowers. Instead, she cares about the flowers’ colors, favoring whites and pastels, scent and blooming season. (“Nothing lasts long here,” she says ruefully.)

The Lees have “before” pictures, before the present-day vision was realized, when the back garden was neither private nor lovely.

In time, Billy placed three of his own sculptures outdoors, where they can enjoy them while having coffee or drinks. Greensboro’s Public Art Endowment’s first work is his Guardian II, a large sculpture at 201 South Eugene St., donated by Jane and Richard Levy. One of his pieces was recently acquired by Bill Sherrill for his art collection at Red Oak Brewery.

With an international following, Billy recently published a book of his works, entitled simply Billy Lee. Trevor Richardson, director of Herter Art Gallery at the University of Amherst, brings Billy’s astonishing body of work into focus, commenting that, “Billy Lee’s work could be said to be part of our experience . . . His tenacious way of dealing with it through his art offers — at the very least — a profound source of encouragement to us all.””

Now the house and garden to which Lynne and Billy Lee have given so much of their time and effort is reciprocating. When peonies bloomed in May, Lynne frequently found Billy in the garden with his camera. He was shooting the peonies for their figurative qualities, she explained. And they will inspire new work: sculpture he is considering. OH

Cynthia Adams is a contributing editor to O.Henry Magazine.