A storied Fisher Park bungalow awaits its next caretakers 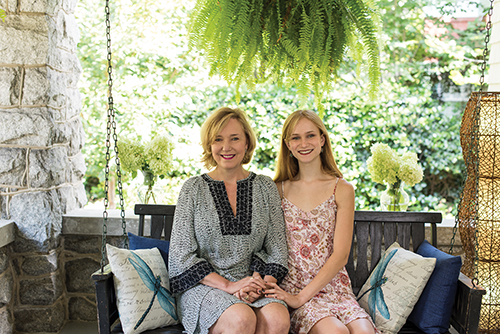 They’re caretakers, one pair in a series.

That’s the way Beth Nilsson and her husband, Carl, look at their 6-year ownership of the C.D. Benbow Jr. House, a broad-shouldered bungalow that perches on a rise overlooking historic Fisher Park.

“We have the best view in the park,” Beth says unequivocally. “You don’t know how many weddings and family pictures we see.” 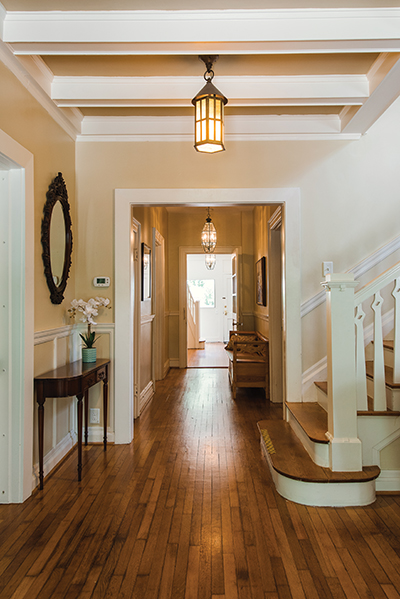 The couple bought the stone-and-shake home in 2013, a hundred years after it was built, and moved in with their blended family of five children — “the Nilsson Olson Brady Bunch” as Beth calls them.

Now that the leading edge of their brood is maturing into adulthood — the kids are 21, 20, 19, 18 and 12 — the Nilssons have decided to sell the 3,400-square-foot Craftsman showplace and downsize to a smaller home. They’re not sure where they’ll end up, but they plan to stick with the eclectic neighborhood on the northern skirt of downtown Greensboro.

“Cookie cutter house? Forget it. We would never leave Fisher Park,” says Beth, who serves on both the neighborhood association board and on the committee that governs the leafy park. 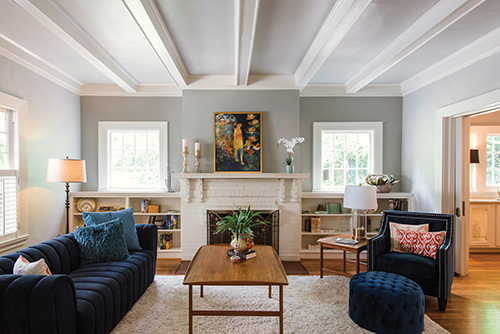 The neighborhood, which took root at the turn of the 20th century, is a platter of architectural styles and contains a National Historic District. Clashes — such as the fray about whether the owners of Hillside, the recently renovated Julian Price House, should be able to operate a bed-and-breakfast with event space — are not surprising, Beth says. “People are passionate about living here.”

Like many homes in the area, the Nilssons’ place comes with a built-in backstory, one reason it landed on Preservation Greensboro’s Tour of Historic Homes & Gardens in 2017.

Beth flips the pages of a scrapbook. A snapshot shows a line of people standing from threshold-to-curb to get a peek inside. As with many old houses, there’s a pool of local people with connections to the house. 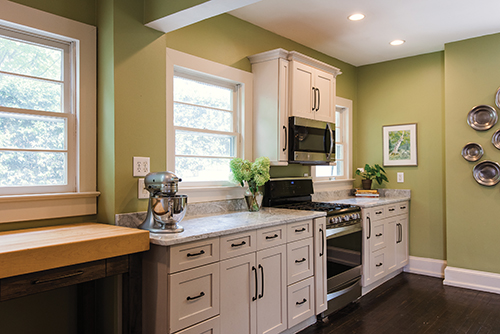 Beth has hosted nostalgic visits from a past owner and the granddaughter of another former owner. A herd of Greensboro folk have been friends and schoolmates of the children who’ve lived there over the years.

“Fairly frequently, someone will say, ‘Oh, I know so-and-so who used to play there,’ “Beth says.

The home was first populated by C.D. Benbow Jr. and Marjorie Long Benbow, who moved in soon after marrying. 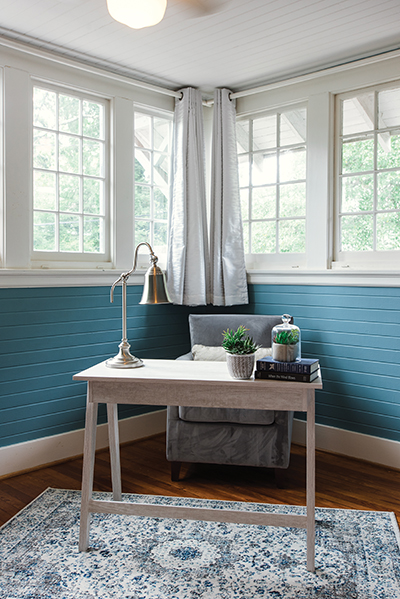 Benbow was a grandson of De Witt Clinton Benbow, a major mover and shaker in Greensboro in the late 1800s. Born a Quaker near the community of Oak Ridge, D.W.C. Benbow was a dentist by training, but he left the tooth-pulling profession for real estate development and civic activism.

He was instrumental in establishing the forerunners of UNCG and N.C. A&T State University, and he saved the precursor of Greensboro College from financial ruin.

He attended the birth of the New Garden Friends Meeting, a Quaker congregation, and the incorporation of the Guilford Battleground Company, which preserved the Revolutionary War battle site, now a national military park.

He also built Benbow House, a four-story hotel at the corner of South Elm Street and what is now February One Place, the site of the International Civil Rights Museum.

When it opened 1871, Benbow House, with its tall, thin French-inspired windows, was lauded as a premium hotel. It hosted a band of northern newspaper editors on a tour of the “upper South” after the Civil War. The first person to sign the guest register was former governor Zebulon Vance.

The hotel burned in 1899. New owners replaced it with The Guilford Benbow Hotel, which was run by Benbow’s son, C.D.

A generation later, C.D.’s son, C.D. Jr., shunned the hotel business — he sold real estate and cars — but knew what fine accommodations looked like. He incorporated a taste for solid construction into his new Fisher Park home.

Schlosser’s handiwork distinguishes several Fisher Park homes, as well as the hardscape inside the park. Just across the street from the Nilssons’ home lies the so-called King’s Chair, a fanciful stone throne that was built in the 1930s and relocated to the park in 2014. Schlosser also wrought several of the stone bridges that span a creek in the park.

The Nilssons have spent many hours on their deep front porch gazing into the park and entertaining friends. When they married at Holy Trinity Church, wedding guests had only to walk a couple of blocks to a reception at their home.

When the couple celebrated Carl’s 50th birthday with a James Bond–themed bash, the front porch was given over to casino-style gaming tables.

Day-to-day, the family literally chills on the cool, concrete-floored porch, eating meals there and swinging in a wooden swing that they speculate was original to the house.

Inside, the home is expansive as well, with a wide central hallway flanked by living room, dining room, kitchen, and — a rarity for a Craftsman bungalow of that era — a first-floor master bedroom.

The Nilssons have renovated sparingly to preserve the home’s character.

“You couldn’t build a home like this today,” says Beth. “The amount  of labor involved — it’s just not done.”

The Nilssons have left untouched coffered ceilings and pocket doors on the first floor, as well as the hand-sawn balusters  that march up the stairs.

They didn’t dare touch the mural on the landing.

Depicting a seaside villa — perhaps on the Mediterranean — the undated mural is painted directly onto the plaster and framed with molding.

“Isn’t it fantastic?” says Beth. “I hope no one ever gets rid of that.”

To spotlight more original features, the Nilssons pulled up flooring that concealed hardwoods. In the kitchen, they patched and darkened the boards  to conceal an incision across several planks.

Beth shrugs when asked the reason for the line. She doesn’t know or care.

“No one lives in a house like this unless they can stand a little quirkiness,” she says.

In the dining room, the Nilssons converted built-in bookshelves under a triple window to a marble-topped buffet with glass-front doors and glass shelves. Lights inside the cabinet show off a collection of Swiss glass and German porcelain.

Other upgrades include new kitchen cabinets, countertops and appliances, including two dishwashers; a glass-walled shower and fresh cabinetry in the master bath; and a powder room in what was previously a laundry room.

Geared for many inhabitants, the home has three-and-a-half bathrooms and up to seven bedrooms.

Many people would count four bedrooms, but Beth counts up to seven because the upstairs sleeping porch could be used as a bedroom and two of the upstairs bedrooms have walk-in closets big enough to turn into bedrooms, as the family has done.

“It’s really quite an interchangeable house,” she says.

The yard is flexible, too.

The Nilssons refreshed the sloping front yard, leveling and planting a second terrace between porch and street.

The downing of three oaks in the side and backyard in recent years has left room for whatever landscaping the next owners envision.

Ditto for the one-car garage and storage room — formerly a servants’ quarters — accessible by a drive-through port cochère on the right side of the home.

The tall steps leading from side porch to the port cochère speak of another time, when carriages might have wheeled up beside the house and needed a step that was level with a carriage.

Beth took a tumble off that step a few years ago, breaking her back — an injury that required rods and pins to fix — but even that did not dampen her love of the Benbow bungalow.

“I still love this house,” she says. “It brings a strong bond.”  OH