When I teach creative writing, whether to undergraduates or master’s students or community workshop participants, I always tell my class three things. First, I say that the knowledge I will share with them has been accumulated over my years of sitting at the desk and working very hard to get what is in my mind onto the page. This is my way of going about the task of writing, but it is by no means the way of going about it. Other writers and teachers may give different or altogether conflicting advice. It is the student’s job to wade through that advice to discover what works. Second, writing is difficult, and there are no guarantees that what you are working on will ever see print. I tell them that my first publication came when I was a 20-year-old college sophomore. My second publication came when I was a 30-year-old graduate student, which means that for 10 years I was writing and submitting stories for publication without any success. Third, I tell them that their own lives are worth writing about.

This semester I am teaching creative writing at the University of North Carolina-Asheville, which is my alma mater and the campus on which I was living when I wrote and published that first short story 20 years ago. On the first day of class, I told my students the above-mentioned three things that I always tell my classes. When I talked about their lives being worth literature, a student raised his hand and said that he was “just a hick from Mount Airy,” and that we could tell by his thick accent. I told him that he did not sound like a hick. He sounded like someone who was from somewhere and that he should rely on his knowledge of the place he is from when writing because you never know what you will come to understand about yourself when you scour your past and investigate the places you call home and the people you knew there.

With this in mind, our first assignment was to write a personal essay that portrays the places students called home and to consider the ways in which their views of these places and the people they knew there have changed over time. Part of the assignment required them to draw a map of their neighborhood and label the places that meant something to them: Where did their friends live? Where did they play? Where were the places that scared them? Where were the places where they were injured or did something brave or had their hearts broken?

Early in the semester I made a promise to my students that I would write with them, which means I would keep an up-to-date writing journal that responds to the same prompts I gave them. It also meant that I would do things like draw a map of the neighborhood from my childhood and write an essay in response to it. Because I have given this assignment before and spent time drawing maps of my old neighborhood in my hometown of Gastonia, North Carolina, I decided to draw a map of my paternal grandparents’ neighborhood in Shelby, North Carolina, where we spent just about every Sunday afternoon of my childhood.

When I began sketching my map I drew my grandparents’ house, and then I drew the houses around it. An elderly man named Roscoe lived on one side of my grandparents. In my memory he wore spectacles and a cowboy hat and looked a little like Grandpa Jones from Hee Haw. Surely I am filling in someone I cannot remember with someone I can, but if I were to write about Roscoe, then I would have to rely on the image in my mind to do it. On the other side of my grandparents’ house a couple named Narse and Linda lived with their daughter Suzie, who was about eight years older than me. I say that Narse’s name was Narse, but it was probably Norris and my grandparents and my father pronounced it with only one syllable. I cannot remember what Narse or Linda did for a living, but I remember that Narse had a garage behind his house where he worked on cars, and sometimes he would invite my father and me over to check out his work.

I drew the garage behind Narse’s house on my map, and seeing it reminded me of something that I had not thought of in years. Behind my grandparents’ house was a huge, dusty patch of garden where they would grow vegetables in long rows. Behind the garden was a stand of trees of some kind. I have a very foggy memory of my father taking my younger brother and me on a walk behind this stand of trees to a shaded area where goats munched on grass. In this memory I am about 4 years old, and my brother, who is in my father’s arms, is about 2. I can remember picking up some kind of fruit off the ground, perhaps apples, and feeding it to the goats. I can remember the feel of them eating the fruit from my hand, the roughness of their horns against my palms, the clangs of the bells around their necks as they moved around us.

Where had this memory been for so many years? Would I have recalled it had I not done this exercise, had the image of Narse’s garage not led to my grandparents’ patch of garden?

I talked about my memory of the goats during our next class. I asked the students to consider how they would use voice to tell their stories. For example, would they limit their perspectives to the moment of their experience when they were 4 or 10 or 15 years old, or would they move beyond it and tell their stories from the contemporary moment of being college freshmen and sophomores? I asked them to ponder this because a 4-year-old’s powers of observation are not as sharp as a 10-year-old’s, and as authors they have to think about what their characters perceive and how these perceptions will be shared with the reader.

I used an exercise to illustrate my point. On the chalkboard I wrote “memory of feeding the goats.” I drew a line on the left and wrote “four years old” above the line. I explained to the class that if I were going to recall this memory from the perspective of my 4-year-old self, then I would only be able to draw on the information I possessed at that time. On the other side of the memory I drew a longer line, and I marked it at several points. If I were to narrate this memory from the perspective of my 15-year-old self, then my voice would probably have an edge of boredom to it: What were we doing out in the backyard feeding goats when I could have been playing video games or shooting basketball or talking on the phone to girls? How would I narrate this memory at 19 after I had lost both my grandparents? Would my recollection of this place that had recently been sold contain an air of nostalgia? Continuing down the line headed away from the memory, I stopped and wrote “thirty-eight,” which is how old I was when I lost my father. If I were to narrate this memory from this vantage point, how would I portray the man I had lost as he held my brother in his arms and told me not to be afraid of the small black goats that milled around us?

The line continued a little farther, stopping at 40, the age I am now. There, my back turned to my class, chalk held to the board, I remembered something else that I had forgotten. My grandfather died just before I turned 5. I have memories of knowing he was dying in the bedroom at my grandparents’ house, and I have memories of adults — my parents and aunts and uncles — shushing my brother and me while we played. We were too young to play outside alone, so my father took a break from sitting by his own father’s bedside and carried my brother and me outside to the backyard. Wanting us away from the house, he decided to show us the goats on the other side of the trees, where our voices could not be heard inside my grandparents’ bedroom.

In that moment, standing in front of my students, I realized that my memory of feeding the goats was not the story I would write based on the map of my grandparents’ neighborhood and the memories it conjured. No, I would write about another memory, a memory much more recent, but a memory that involved my father just the same.

I am not 4, but 38. It is not my grandfather who is dying, but my father. We are not at my grandparents’ house in Shelby, but at my parents’ house in Oak Island, and it is not my brother and me whose voices are being shushed by the adults tending my grandfather, but the voices of my two daughters in the hallway outside my parents’ bedroom door. In this memory I pick up my youngest, who is barely 2 months old and having trouble settling down for a nap, and I take the hand of my oldest, who is almost 2. We walk out into my parents’ backyard so that my oldest can play and the baby can cry and settle without anyone worrying about her disturbing my father, who we all know is long past being able to hear us.

I look up at the windows of my parents’ bedroom, knowing that my father may be gone when I go back inside. Now, as I write this, I wonder if my own father thought the same thing on that day long ago as he held my brother and watched a small black goat eat an apple from my hand. What else could he have been thinking? How good it feels to have the warm spring sun on your face, to feel the heft of a baby in your arms, to hear the sounds of a child laughing outside in the light.

These memories have been locked inside me from anywhere from two to 36 years, and they are layered and resonant and difficult to describe. I would struggle to explain how to get them on the page, and doing so would not guarantee anything at all aside from the work it would take. But I do believe these memories are worth writing about, and I do believe that I will stay in that moment, a goat nibbling at an apple in my hand, my newborn daughter asleep in my arms, my father and my grandfather on the cusp of leaving this world, for as long as I can. OH

Wiley Cash lives in Wilmington with his wife and their two daughters. His new novel, The Last Ballad, is available wherever books are sold. 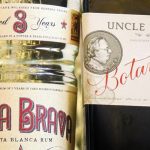