A Slip of the Chisel.

And a Whole New Life

Paul Nixon, an Irishman by way of McLeansville, could be a character from a Celtic fairy tale.

He’s spry and compact with a workingman’s handshake, playful eyes, a flourish of salt and pepper hair, and sloping eyebrows that mimic the tilt of his mustache.

A brogue twines around his words, which he knits into long stories. His laugh tumbles out often because he’s fond of telling jokes, like this one:

Back when he was a car mechanic, he was used to seeing people cry — when he handed them a bill for repairs. 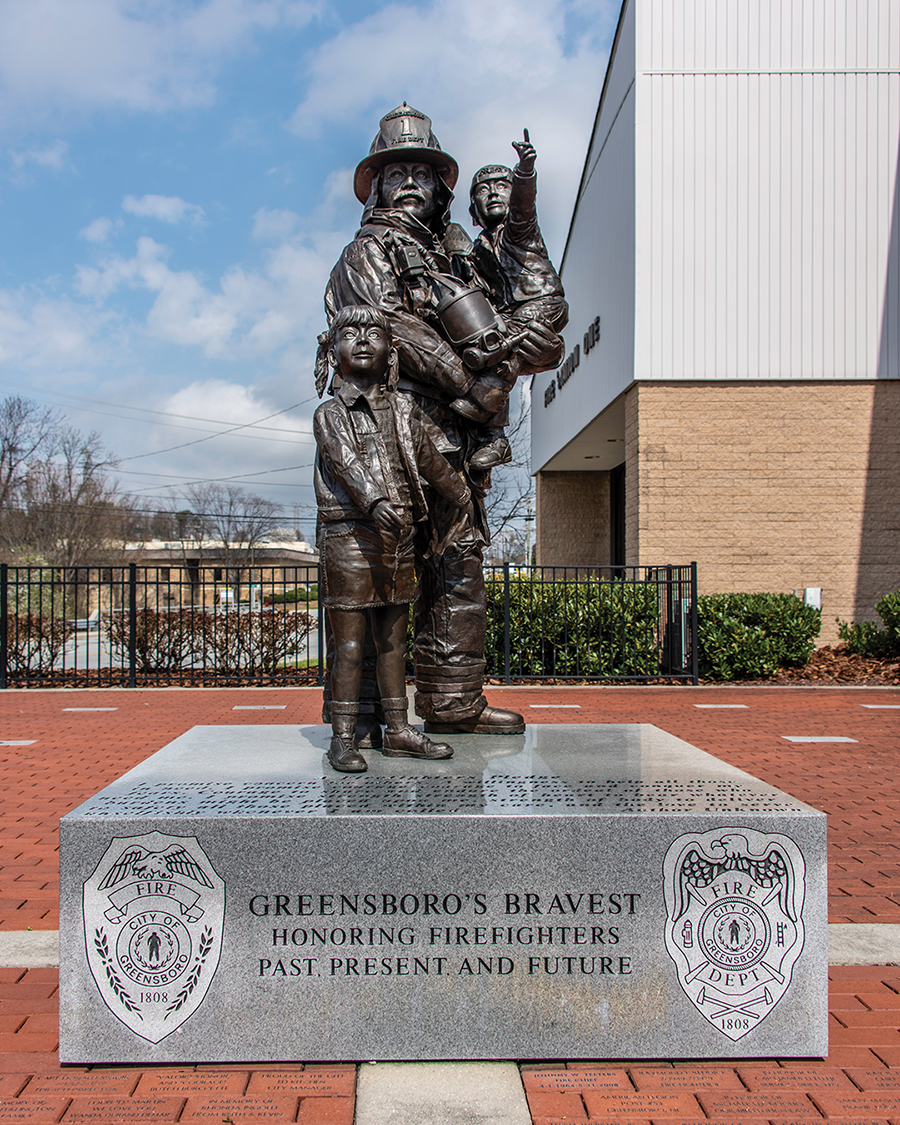 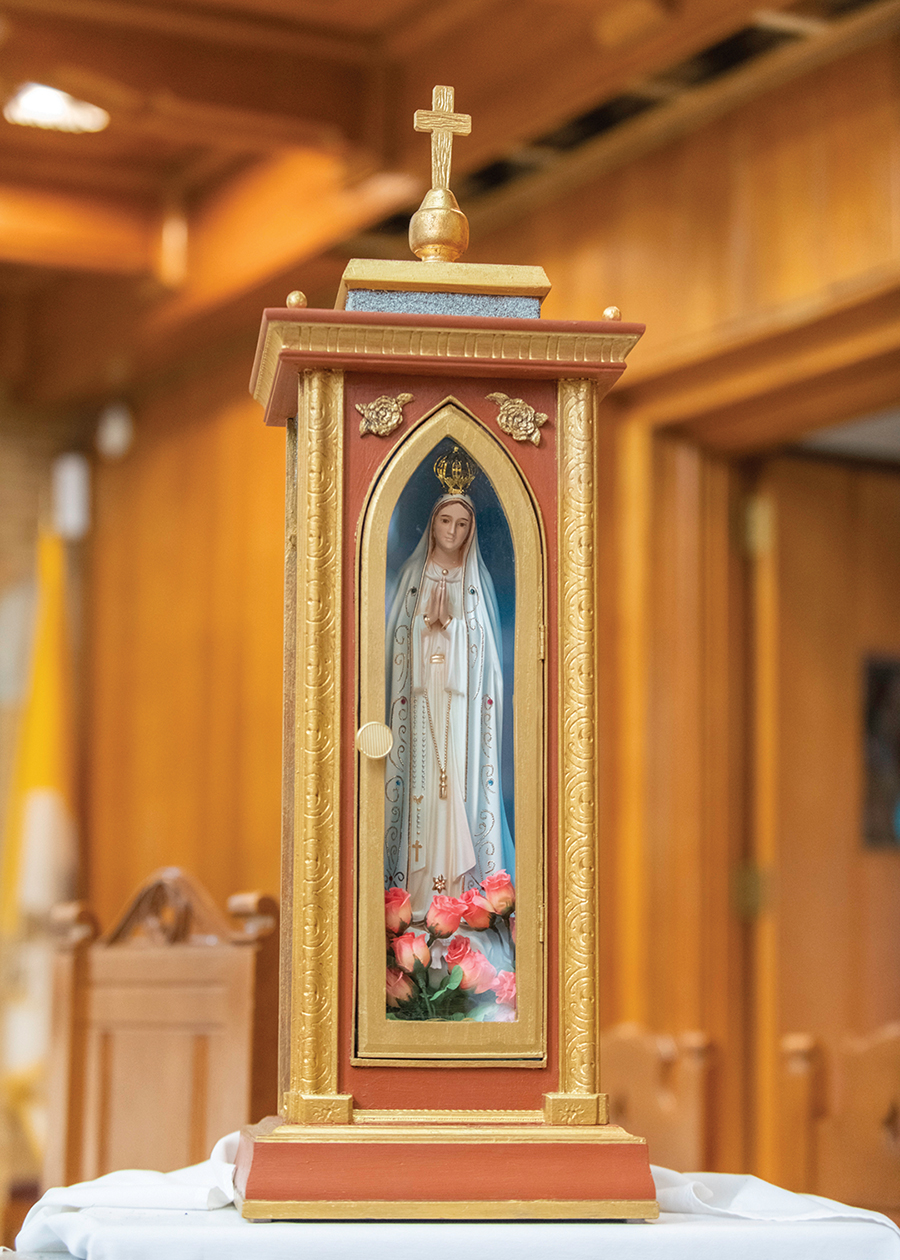 Then he adds a kicker: When he became an artist, at age 45, his clients’ tears were real, flowing from the heart.

“It changed my life in a profound way, he says. “I realized, ‘Oh my gosh, I think I have something that’s worth exploring.’”

In a month when Greensboro focuses on folk art — much of it on display downtown at the North Carolina Folk Festival — it’s worth hearing the story of a local guy who, for decades, was more folk than artist, a grease-under-the-fingernails sort who harbored a sensitivity to beauty and a yearning to express his feelings in a way that others could recognize and appreciate — the essence of an artist.

“If this happened to me, it could happen to other people, but it does take patience,” says the 67-year-old Nixon, who traded carburetors and transmissions for a creative portfolio that includes sculpture, carving, painting, stained glass and digitally-composed photography, along with art and antiques repair.

He’s best known for his bronze works in this area:

The figures of a firefighter and two children in front the Greensboro Fire Department headquarters on Church Street; a sculpture, installed at the local hospice, honoring Patrick, a therapy dog who attended many people in their final hours; a bust of a World War II soldier — whose multi-ethnic facial features represent the vast fabric of American fighters  — at a VFW post in Summerfield; and a pair of winged lions at the entrance of the Grandover Resort.

He just finished another commission for Our Lady of Grace Catholic Church, a series of ornate wood-and-glass boxes for the congregation’s Mary of Fatima statues, portable shrines that parishioners can take home as focal points of prayer.

Churches are good customers, and Nixon has shipped many pieces to out-of-town flocks.

He has carved elaborate croziers — a fancy word for wooden staffs — for an assortment of clergy. He also made an intricate staff — a tribute to St. Patrick — that’s on permanent display at the Sligo County Museum in Ireland, his childhood stomping ground.

He spent summers there with his maternal grandmother in a 300-year-old thatched roof cottage at the foot of Tievebaun Mountain, aka White Mountain, believed to be the home of a faerie door in Irish folklore.

Fellow Dubliner William Butler Yeats, an early 20th century star of Irish poetry and drama, spent boyhood holidays there, too, and was inspired by the place’s supernatural aura. Some of Yeats’ writing and personal effects are preserved in the same museum that houses Nixon’s staff.

Nixon donated the walnut staff — and a bust of Celtic warrior Queen Maeve — as a nod to the place that molded him. He confesses that his gifts doubled as a tweak to a high school art teacher whose words he remembers exactly: “Your subject matter is too small, and I don’t think you can make it as an artist.”

Her words pressed a thumb on the scale of Nixon’s already low self-worth, and they added to Nixon’s fear of making mistakes, which was reinforced by teachers who lashed the tops of fingers with bamboo canes when students goofed.

Shy and unsure of himself, young Nixon threw himself into a multitude of physically demanding jobs after school— construction worker, alongside his cabinetmaker father; TV stuntman; and mechanic for a caravan on an African safari.

In 1985, at age 29, he embarked on a personal expedition, leaving Ireland for America. 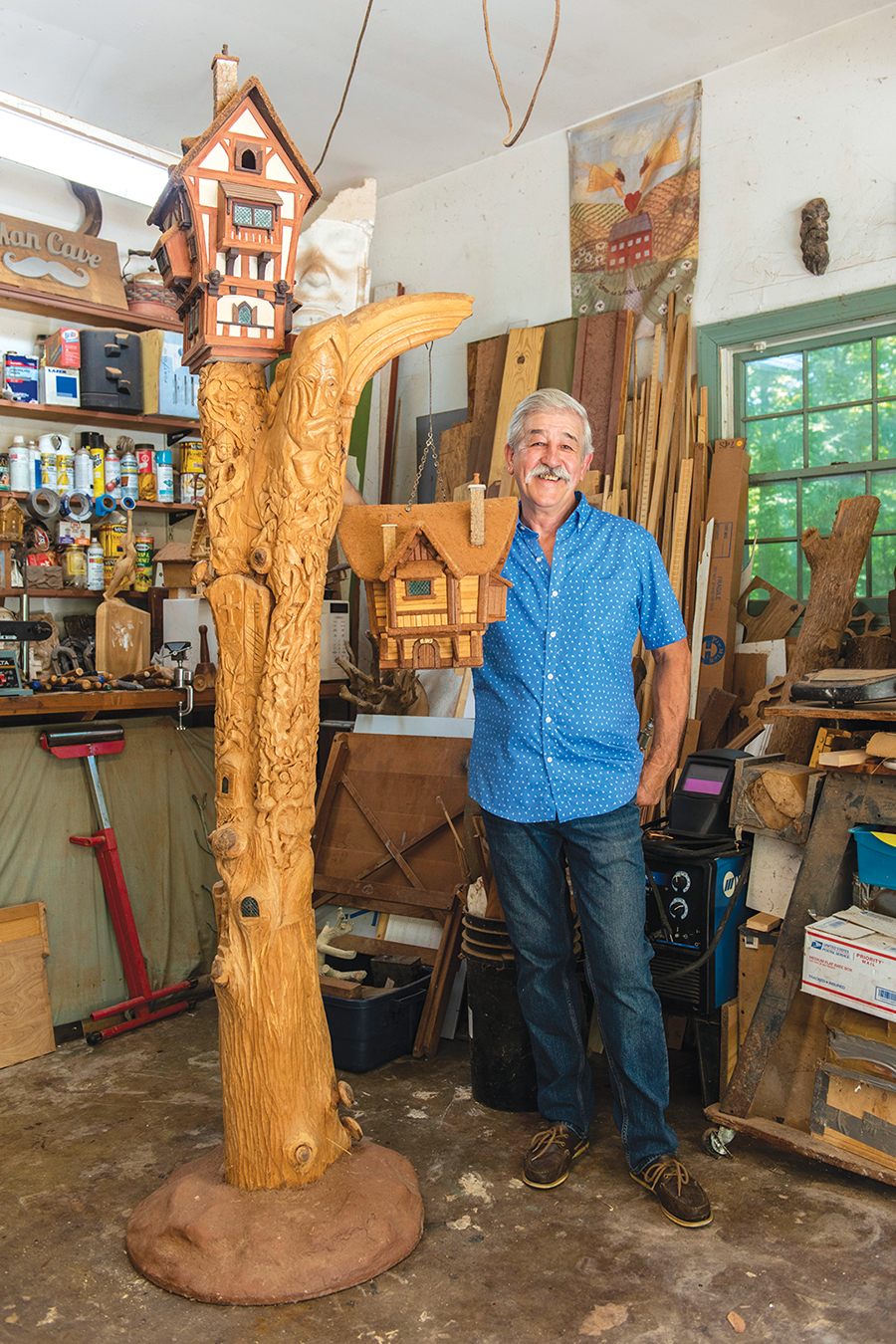 “I knew I had to lose myself to find myself,” he says.

He unearthed part of himself in White Plains, N.Y., where he bought part ownership of an auto garage and pursued ballroom dancing as a way to meet women.

“It was putting myself in the public lights — and being afraid of it — yet it was an adrenaline rush for me. It became a passion,” he recalls.

He met his wife, Francesca, a physical therapist, when she brought her car to the shop. He took her ballroom dancing on their first date.

“That was it,” he says. “We only dated three months when I proposed.”

They moved to the Piedmont in 1999 to be closer to Francesca’s family, and Nixon continued his work under the hood in a Greensboro garage.

Nixon turned a block of walnut into a plain shaft and handle.

“It didn’t have much luster,” he says. “I wanted it to be special.”

He picked up a knife knowing he could make it better, or worse, by carving a design on the cane. He took a chance. He cut away the wood to reveal one leaf and called his wife, who admired his work.

“What are you going to do now?” she said. 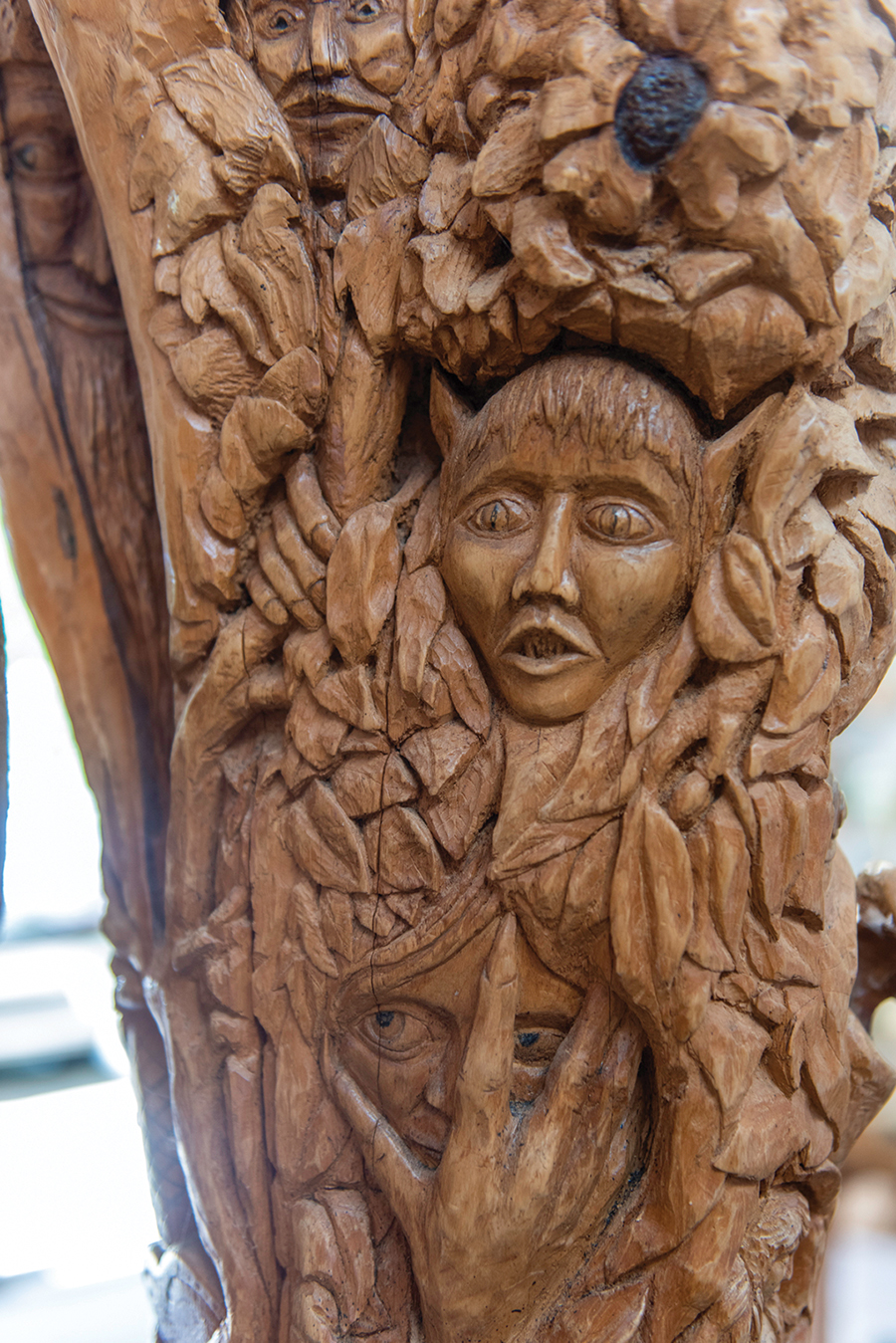 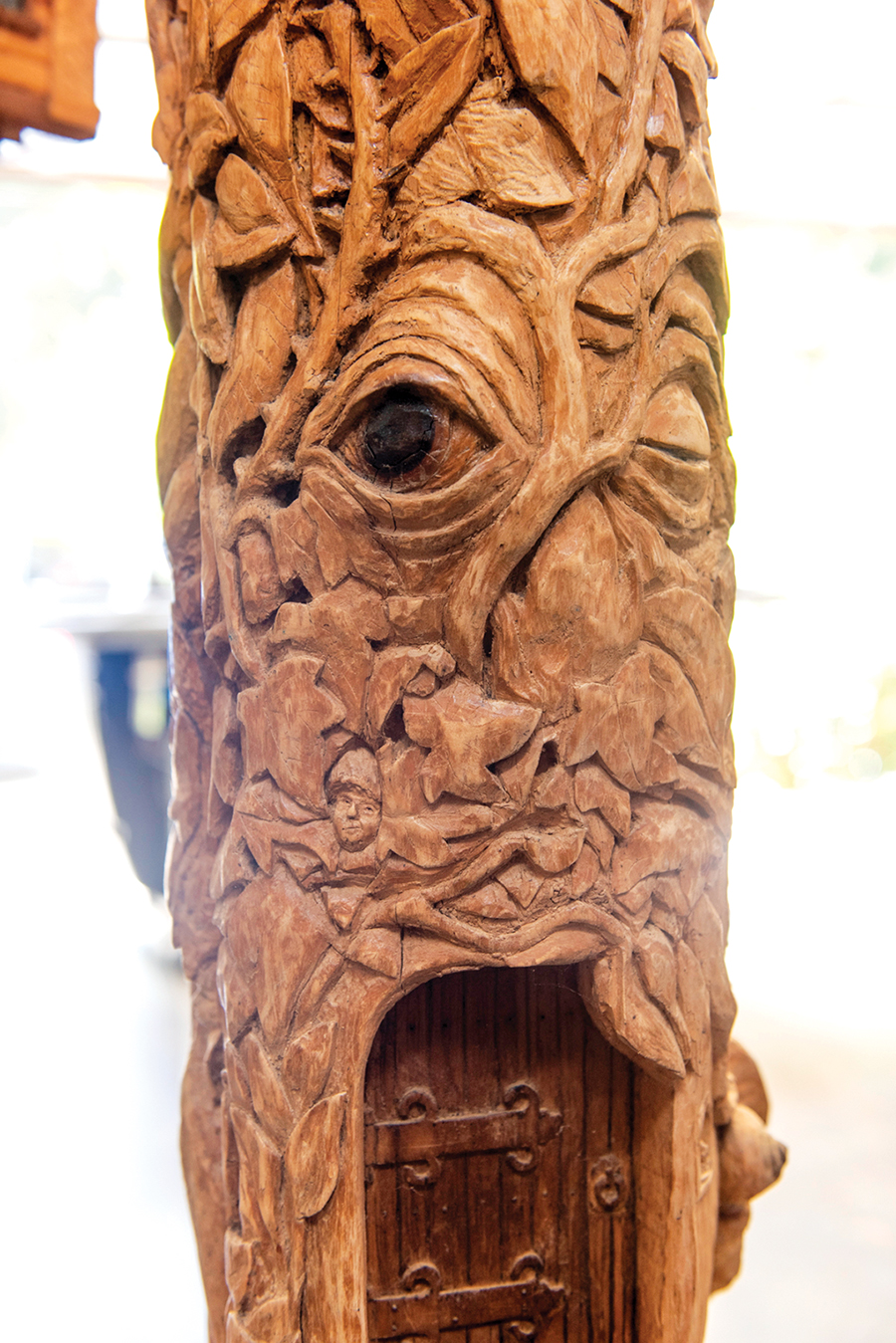 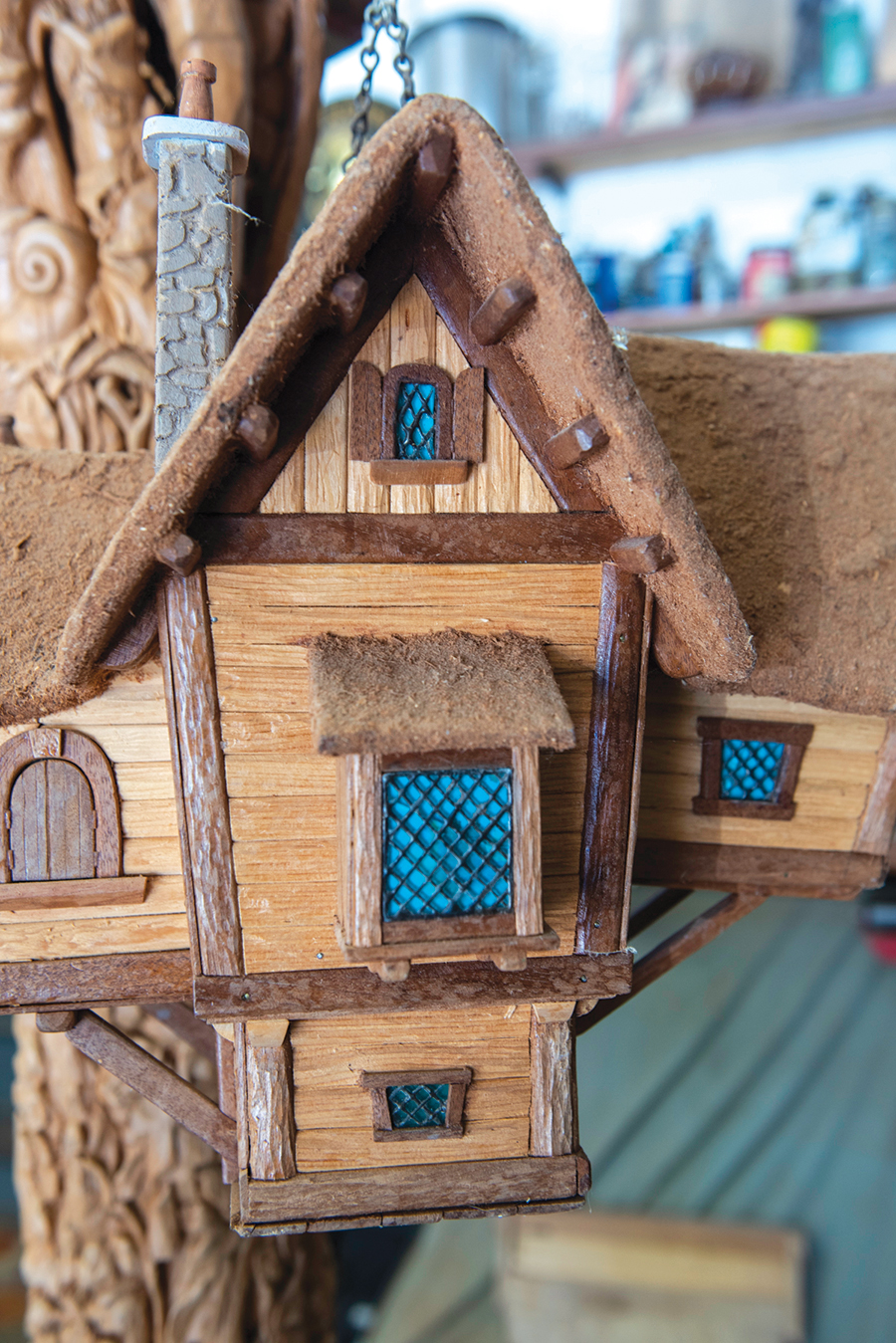 “I think I’m going to do a vine coming around the handle,” he said.

Forty hours later, he threw the stick under his work bench, disgusted.

A slip of the chisel had sliced off the tip of a leaf.

A week later, Francesca noticed that he’d stopped working on the stick. She asked about it.

Francesca replied that Aunt Mary was expecting something unique, so he’d better resume the project.

“My wife has always seen more in me than I’ve seen in myself,” he notes.

He found the cane and studied his mistake. He thought about leaves he’d seen in nature. What if he made the clipped leaf look like it was folded back on itself?

He picked up a knife and kept going.

Aunt Mary burst into tears when Nixon and his wife presented her with the vine-wrapped cane one Sunday after church.

“I’d never experienced that before,” he says.

This is his cue to tell the joke about the car repair bills.

But you can tell he’s not kidding when he talks about the impact that Aunt Mary’s emotional response had on him. He left the car repair business about five years later, after he finished the Greensboro Fire Department bronze and partnered with a local art gallery.

“Thankfully, Francesca believed in me and supported me. Eventually, my income improved considerably, to where I have a happy wife and a happy life,” he says.

Twenty years after his chisel skidded through a spot of soft wood, he’s no longer afraid of making mistakes, an inherent part of creating.

“For the most part, taking risks always seems to take me to the next level, in that my confidence and art skills continuously improve,” he says.

His practice also pays off beyond the bottom line.

“It’s given me a sense of purpose to know I’m affecting people in a positive way,” he says. “It’s a rich reward for me.”  OH

Maria Johnson is a contributing editor of O.Henry. Email her at
ohenrymaria@gmail.com. See some of Paul Nixon’s work at
paulnixonart.com.

Story of a HouseFeature, September 2022