Warning: "continue" targeting switch is equivalent to "break". Did you mean to use "continue 2"? in /var/www/wp-content/themes/jupiter/framework/includes/minify/src/Minifier.php on line 227
 A Case of Holiday Kismet – O.Henry Magazine

A Case of Holiday Kismet

For Marc and Mary Powell Young DeLille, High Point’s historic Wilson House was nearly theirs before they saw it 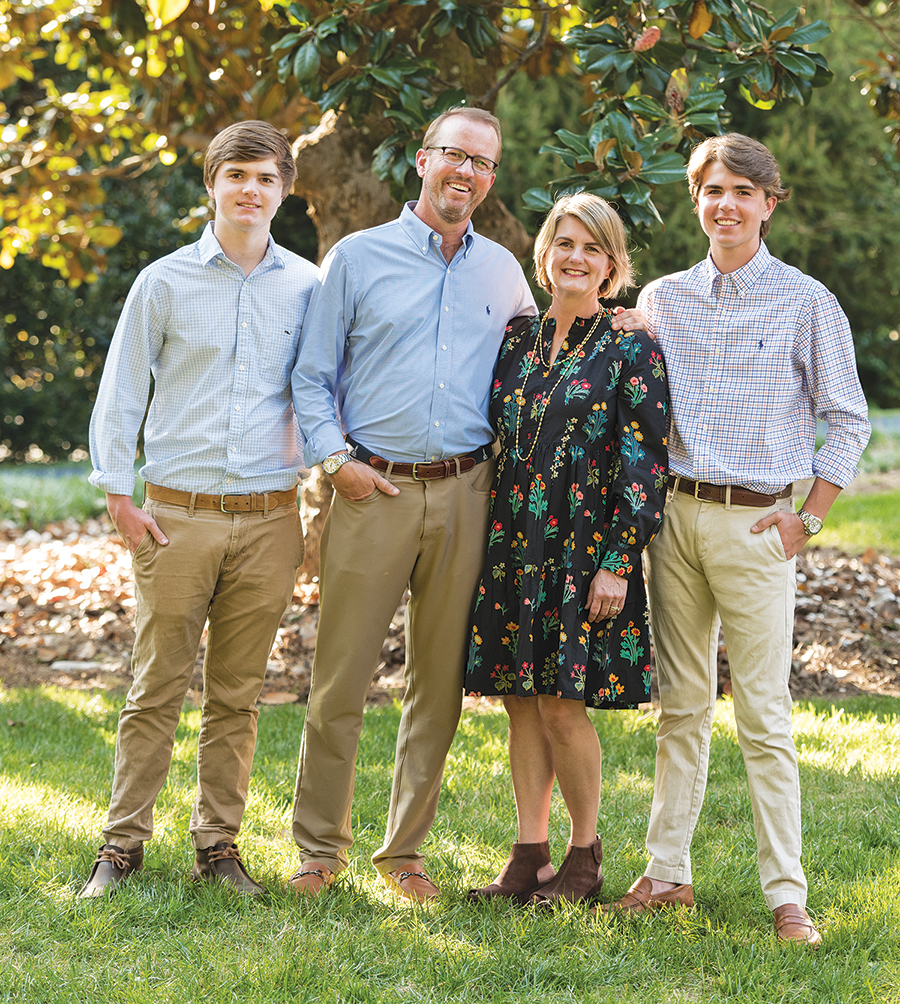 Twelve years ago, Marc and Mary Powell Young DeLille had completed a renovation on Hillcrest Drive in High Point’s Emerywood neighborhood, and the resulting improvements (including a brand new kitchen) were just as they hoped. The DeLilles, experienced renovators themselves, were contented.

That is, until a remarkable property known as the Lucy and J. Vassie Wilson house, one listed on the National Register of Historic Places, lured them inside for just a peek at its Federal Revival style.

The unforgettable date was December 24, 2008. Mary Powell Young DeLille — whom everyone in High Point knows as Mary Powell — says what happened next was not exactly expected. (Was it simply a stroke of good fortune, or a bit of holiday kismet?) 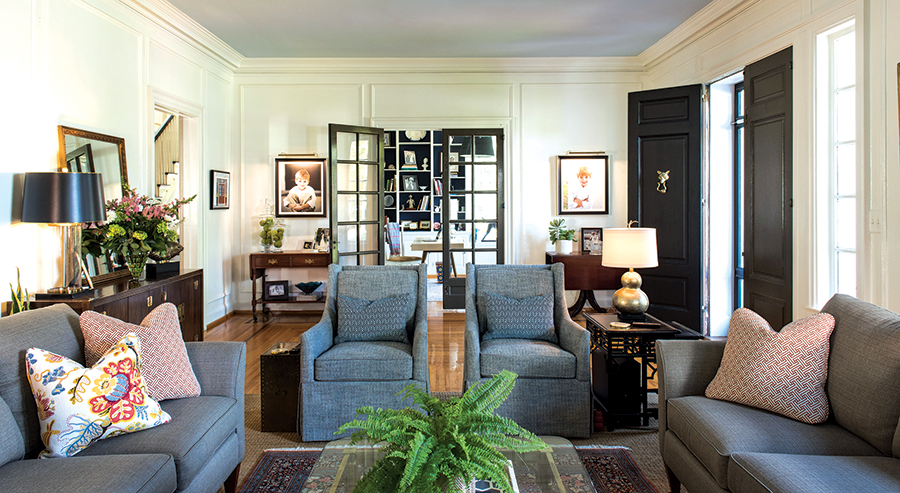 “It was Christmas Eve. We were at my mom’s for dinner. She mentioned the house.”

Mary Powell and Marc exchanged looks and her Realtor mother, Carol Young, didn’t hesitate a minute. After all, the occupants were no longer there.

Carol said knowingly, “Let me go and get my key to the lock box.” 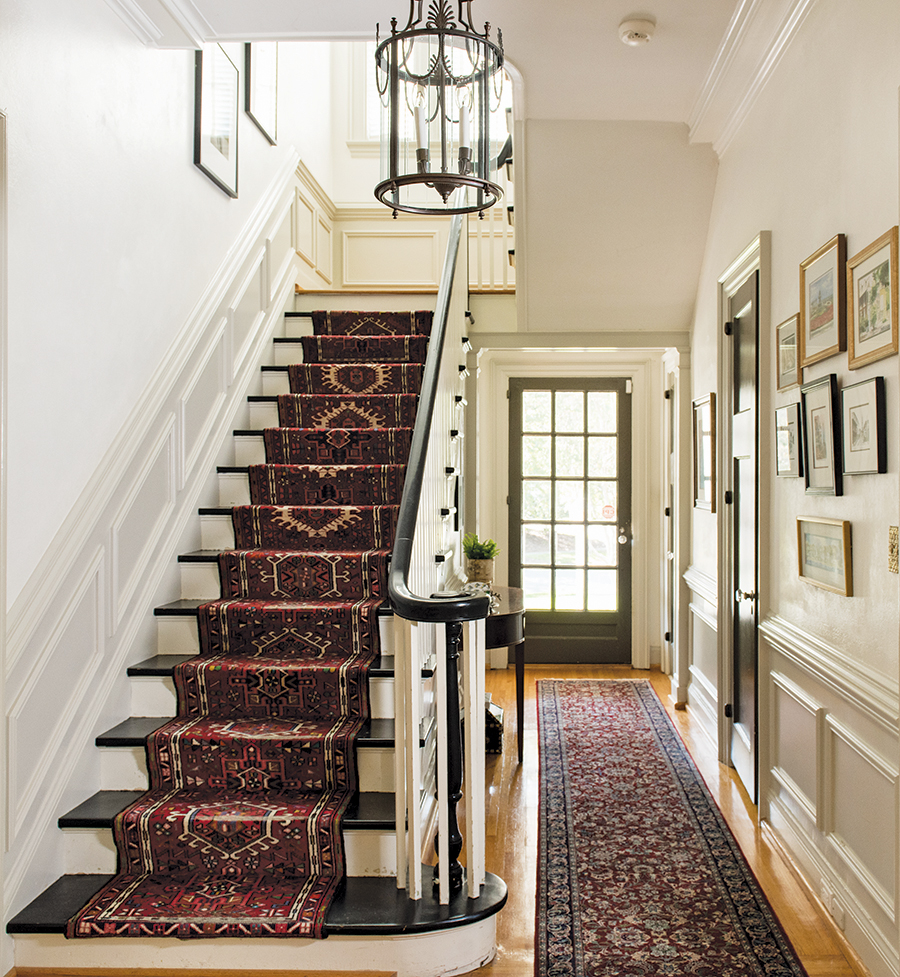 The couple rose up from the table, thinking it would be interesting to look — where was the harm? They could pop over and be right back in a tickety-boo — resuming their celebration.

The Wilson House was one the DeLilles had long admired.

“And, I love to go into homes,” Mary Powell adds. But she also felt that frisson of knowing; her house intuition kicked in.

Even from the street, this particular house was a seducer.

The historic Wilson House stood out in its grandness and exceptional features — not to mention the many practical positives. It was situated on a generously sized half-acre corner lot. A separate three-car brick garage with an upstairs three-room apartment (intended for servants’ quarters) was accented with the same eye-catching green tile roof as the one on the main house. 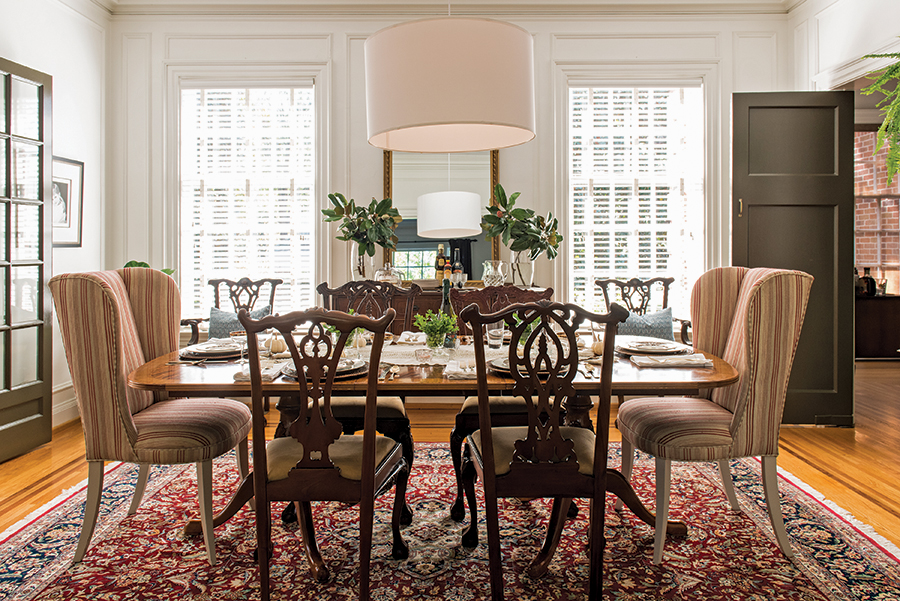 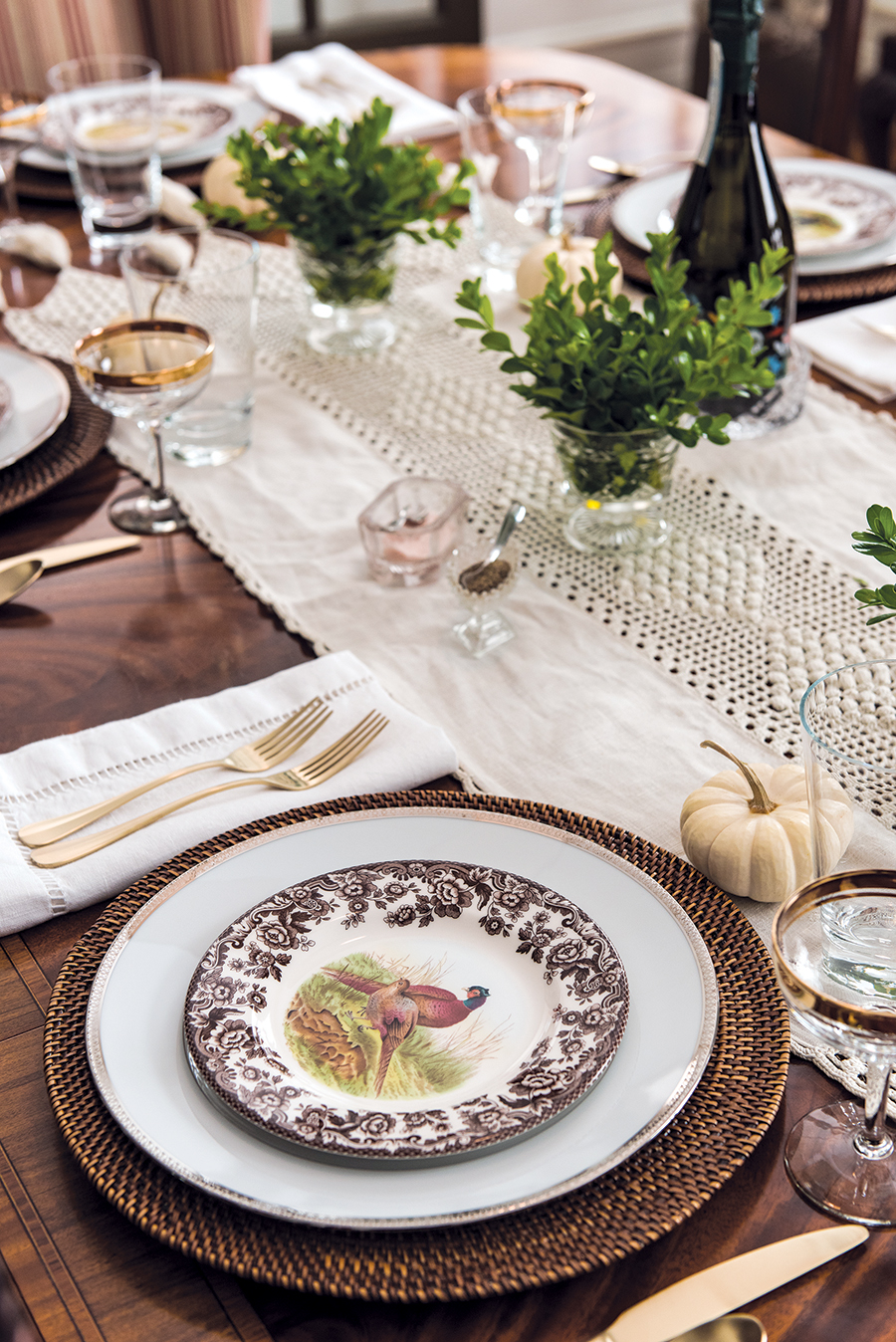 Well . . . A thought flickered through Mary Powell’s mind: the Wilson House was big.

Face it, she thought. It was a lot of house — as it was over 6,400 square feet. And then another cautionary thought: We really like where we are.

Consider that Mary Powell is interested in historic preservation. 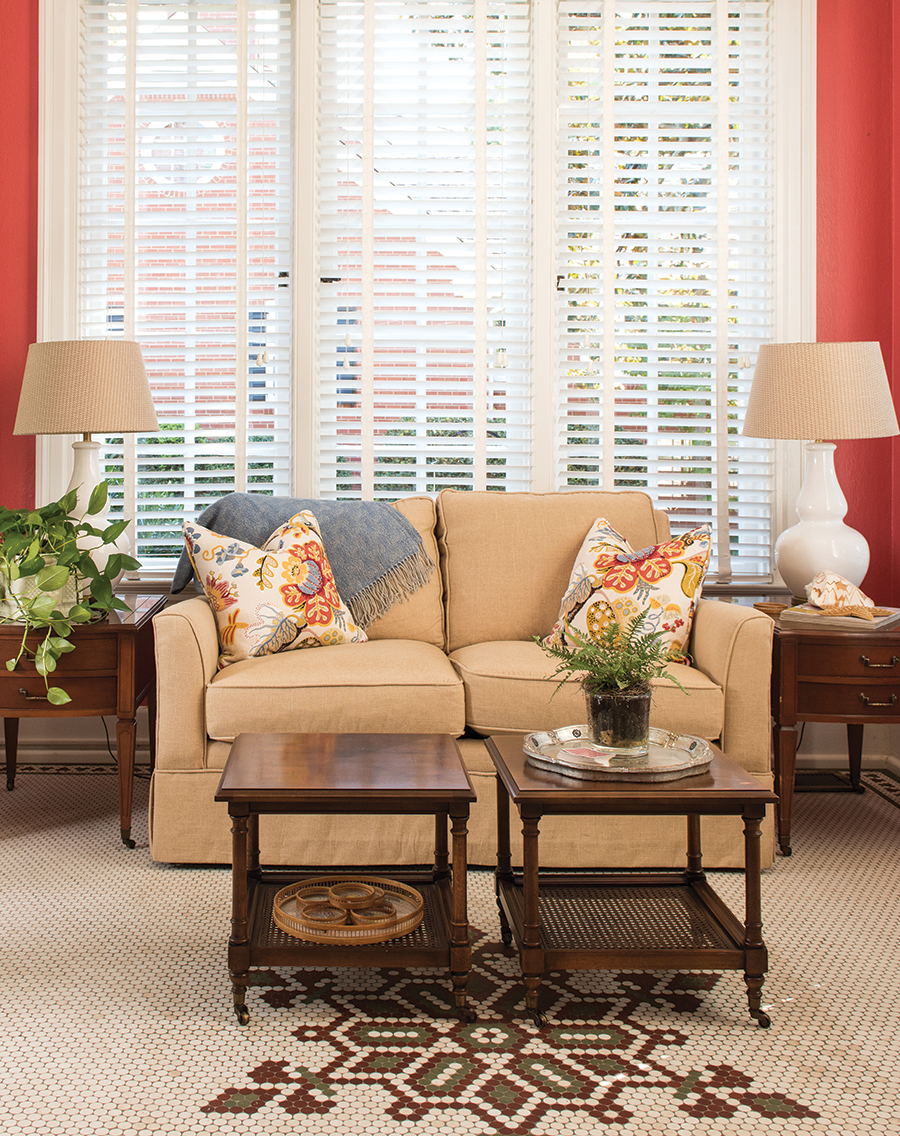 The National Register revealed details about its architectural significance. The two-story brick Wilson House is considered “high style” Federal Revival in design — and what style! — which meant it possessed unique embellishments. These special features include arches over the front windows, with bas-reliefs of garlands and urns.

The 1926 home had a stately semicircular entrance portico with columns and stylized Corinthian capitals. 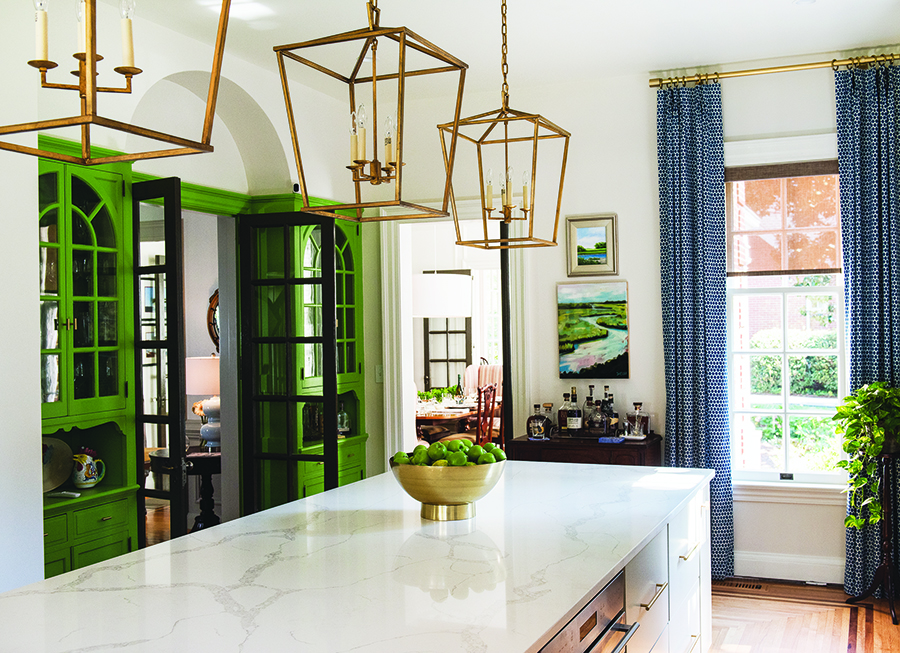 The symmetrical design incorporated an open porch with Doric columns on the east side. On the west was a porte-cochère with Doric columns, allowing for access via the side of the house. Over both sides were Chinese Chippendale-style balustrades.

The porte-cochère had since been widened to allow for modern SUVs — versus the slimmer Packards or Pierce Arrow roadsters driven in the Roaring Twenties.

Carol Young knew the house well, having shown it in the past. Better still? The Federal beauty with a green tile hipped roof had just been reduced in price.

As the DeLilles followed Carol through the double doors it was evident. Here was the stuff that house addicts like the DeLilles live for. The Wilson home was remarkably intact; no calamities had befallen the house, nor unfortunate modifications to its many charms. 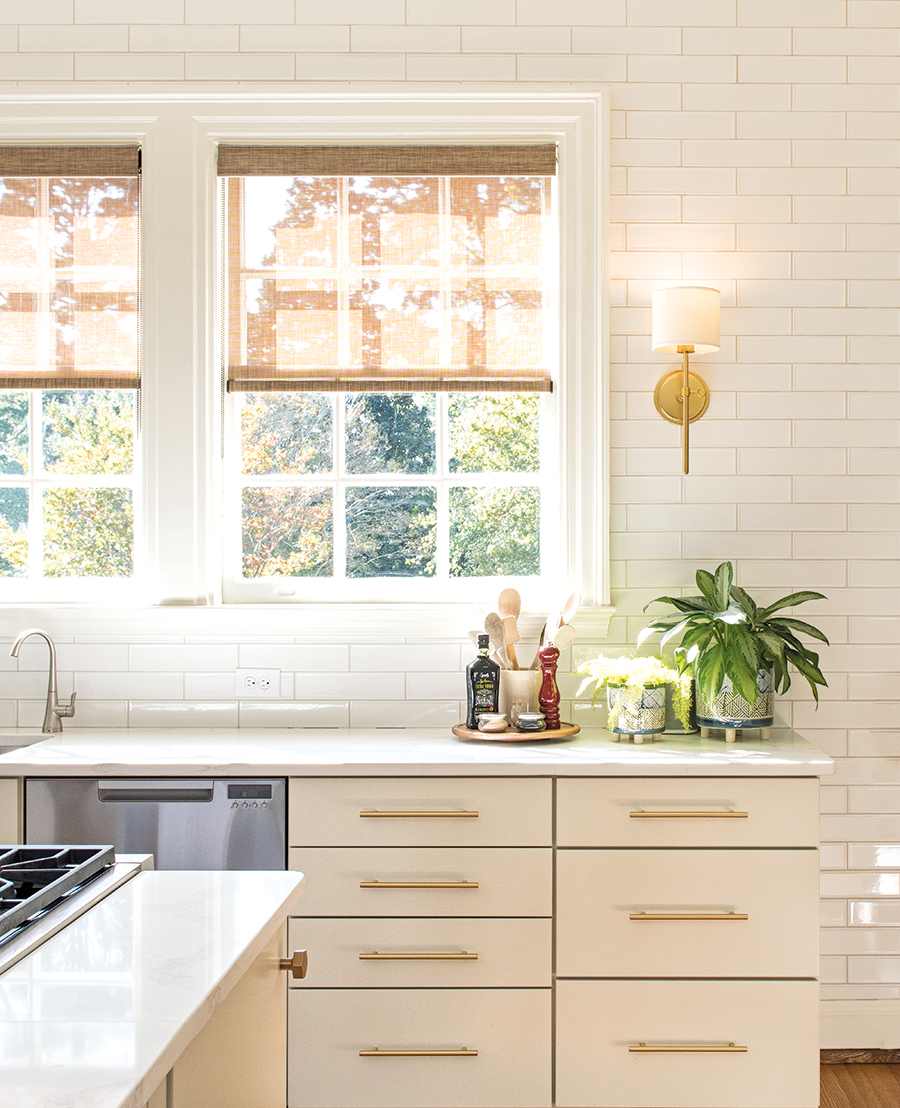 “We walked in — you know when you find the right house. It spoke to me.”

It was grand but not stiff, with 10.5-foot ceilings that made the spacious house seem enormous. The impressive double doors opened directly to the living room with an original Federal-style mantle and plaster embellishments.

The plaster walls (in excellent condition) were accented by deep plaster crown moldings and raised box molding that resembled wood.

“It had a lot of inlaid floors,” Mary Powell noted. They were also immaculate, red oak laid in concentric rectangles. Black walnut and sycamore had been used for a contrasting border.

French doors on either side of the fireplace opened to the porch. A smaller room on the right was designated as the study on the existing blueprints conveyed with the house.

At the rear of the downstairs was the dining room, which had the original crystal chandelier, complete with the original plaster medallion.  Off the dining room was a small sunporch. There was a breakfast room, with original cabinetry, and also the kitchen with storage and pantry.

Almost all the original features in the house had remained untouched. This was the sort of property that makes house lovers a bit weak in the knees.

Sobering, cautionary thoughts did percolate for Mary Powell. The kitchen could use updating. So could the baths; albeit there were charming arches over the showers and tubs.

Christmas Eve resumed as the DeLilles left the house.

Would they tackle a historic renovation this big and grand?

“It’s my husband’s baby too,” she smiles.

In her single years, Mary Powell Young envisioned a future as a sculptor and painter, creating art and attending gallery openings.

That changed soon after she graduated from the College of Charleston with a fine arts degree. That she ended up returning to her High Point hometown, she admits, sort of surprised her. But her family had deeply set Triad roots, given her father’s career as a veterinarian and her mother’s real estate career.

Mary Powell also shared “this house thing” with her mom — meaning she loved houses in an equal opportunity way, especially down-on-their-luck ones. Ones needing love, she says.

Her mother had an idea right after Mary Powell’s return: They should tackle a fixer-upper.

Mary Powell’s first project was 1013 Johnson Street near the JH Adams Inn. Known as the Dalton-Bell-Cameron Craftsman Bungalow, it had partially burned in the mid-1990s.

The project turned out so well that her mom suggested she become a contractor.

Mary Powell flirted with the idea of doing it. “But 1013 Johnson Street was my contractor’s course,” she laughs.

“I liked the idea of saving houses,” she adds. However, the reality of becoming and being a contractor — first putting hours into studying, getting a license and then spending long hours handling paperwork, pulling permits and getting projects bids — was unappealing. Instead, she got her Realtor’s license, joining her mother in the business.

Yet the renovation bug had bitten her. Her early success was appealing enough that she kept renovating promising houses. She had worked on six properties when she first met Marc DeLille, who is in commercial real estate.

The restored Dalton-Bell-Cameron Bungalow remained the DeLilles’ home for 10 years. It was where she initially lived as a single woman undertaking renovation projects, and where she remained after marriage and while beginning a family.

The couple moved on to other homes, renovating and improving their way through High Point properties.

In 2013, the Dalton-Bell-Cameron Bungalow suffered near devastation after the DeLilles’ had sold it. After a second and far more serious fire the bungalow languished and was nearly razed until six years later, when it was restored yet again thanks to the High Point Preservation Society.

Mary Powell is both a member of the High Point Historic Preservation Commission and the Junior League; the Junior League chose the bungalow as a showhouse. (See the feature story in the November 2019 issue of O. Henry.)

“Someone called me a house Sherpa one time,” she laughs. “The artist in me loves houses.”

Within months of seeing the Wilson House, the DeLilles owned it. In nearly 100 years, the property had only been owned by four people.

Yet it had been well kept. “We did nothing to the living room apart from painting the ceiling,” says Mary Powell. “It said, ‘Make me pretty again!’” She quickly claimed the original library as her office and the sleeping porch for an art studio.

Mary Powell put her art training to good use. Marc erected scaffolding so she could restore the bas-relief stucco garlands on the front exterior.

“Chunks were falling off. I made plaster molds, got Bondo and layered it. All the swags above were gone. I did the relief first then the stucco.”

It was challenging work, but “I had to redo those!” she says, calling the garlands “the signature of the house.”

They expanded the master bedroom’s ensuite bathroom and closets, preserving the arch over the shower. The master bedroom retains the original fireplace, one of two in the house.

“I’m an immediate gratification kind of person,” she laughs. “As an artist, I love making something pretty again, something screaming for help.”

By example, Mary Powell kneels on the sunporch floor. She excavated layers of old tile to expose a penny tile mosaic beneath in excellent condition.

The kitchen was redone just last summer. The DeLilles retained the original buffets and pantry and copied the kitchen’s floor — a pattern of walnut inlay in red oak — carefully replicating it in the new portion of the kitchen. Fortunately, they owned the original blueprints, so it was simple to identify load-bearing walls and the home’s plumbing and electrical systems.

With four bedrooms and three and one-half baths, the house is roomy and accommodating. Architectural Digest once called the house a “combination of high-classical design and funky iconoclasm.”

As landscapers buzzed around the property in autumn, Mary Powell revealed their latest “COVID project,” which involved reviving an outdoor lion’s head fountain. “We Realtors hear that term all the time — everybody had a COVID project this year. People are doing a lot of decorating.”

The fountain, now working again, is the prime feature of the original sunken garden and terrace behind the garage, which also appears on the 1926 blueprints.

With new landscaping and a new area for the family to entertain outdoors, the garden space is serenely private.

“We bought chairs from the Amish Trading Company for the garden,” Mary Powell says, “but had to wait given the demand for outdoor seating during the pandemic — when everyone wants to move gatherings outdoors.”

As a friend says, you can find the DeLilles working on their property almost any weekend. The artist within admits the work isn’t completely done.

“I would love to update the boys’ bath and the garage apartment,” Mary Powell adds.

The large floored attic, where a former owner’s children used to roller skate, is still another project. These will hold the interest of an addicted do-it-yourselfer, a trait the couple share.

“The Lucy and J. Vassie Wilson House ranks among the finest, and retains excellent integrity,” reads the National Register application. In making the house their own, it has certainly become pretty again. And the DeLilles’ most successful project — “Yet,” adds Mary Powell with a knowing smile.  OH

The Nature of ThingsNovember 2020
X