A brave new world: The World is Still the World

The World is Still the World

On our last day at the beach the sun came out, and the fog, which for that whole week had draped the shore in a veil of cotton, burned away: we discovered there was an ocean here, after all. It wasn’t blue, really, closer to black, but when the waves flattened out across the beach, the water was perfectly clear and full of minnows and tiny crabs.

The shells were just so-so, mostly shards of something that used to be beautiful, like ancient pottery washed up from the ocean floor, there to remind you the world was old.

I’d like to say that these discoveries inspired in us a recognition of our own mortality, but the truth was it just felt good to have the sun on our shoulders as my wife and I — so young, newlyweds in fact — walked across the warming sand, hand in hand. She was wearing a black two-piece, simple and very small, and so striking that even the women we passed couldn’t help but stare. Her hair (thick and chocolate brown) was in pigtails, and somehow this girlish maneuver heightened her brazen but effortless display of pure, glorious womanhood. I was invisible in the best possible way.

I stopped walking and looked at her. “I didn’t know it was even close to being ruined,” I said. “We’ve made love like a hundred times, read three novels and watched an entire season of The Walking Dead. That’s almost perfect.”

“Yeah,” she said. “I didn’t mean ruined. But you can’t go back and tell people that it was foggy and it rained the whole time and you read and watched TV. It sounds gloomy.”

“You skipped the part about making love.”

“Because you can’t tell people that, either.”

“No,” I said. “Let’s tell them it was sunny every day and we swam with the dolphins.” 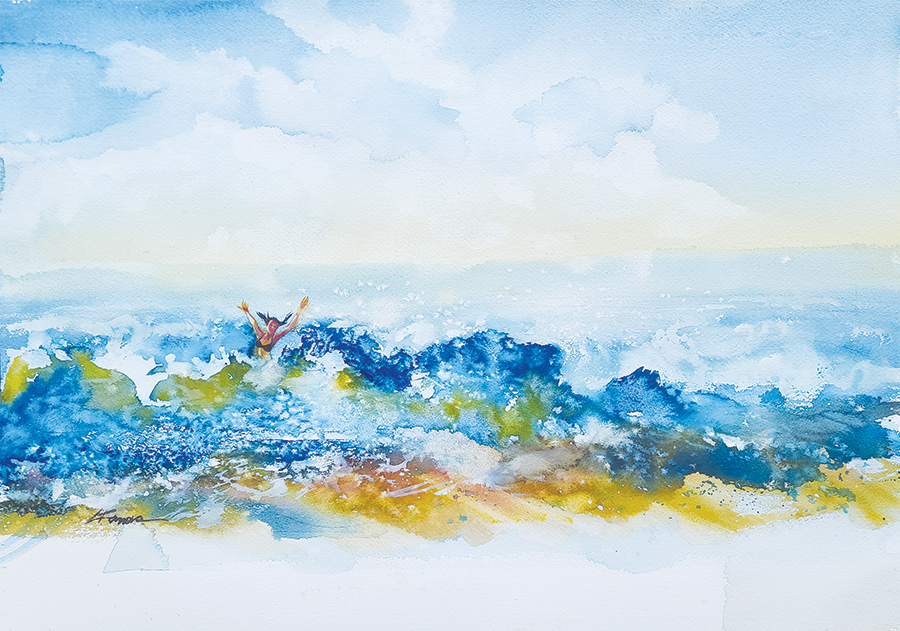 “But that would be wrong,” she said, and we laughed. Somehow this had become a joke: saying but that would be wrong after every wrong thing we talked about doing. I have no idea why or how, but it was hilarious to us, just to us, the way that something that clearly isn’t funny becomes funny for reasons impossible to explain. “That being said, I’ll totally never forget that ride we took on the humpback whale.”

“Because it’s unforgettable. We’ll tell our kids about that.”

“I thought we’d settled on Zeus and Hera?”

“I just think that might put too much pressure on them, honey.”

I slapped my forehead, and a few grains of sand fell into my eyes. “Of course, you’re right. Why did I never think about that? Sometimes I feel like I knew nothing until we met.” Pause. “At least I know you’re a goddess.”

She squeezed my hand. “Keep ’em coming,” she said.

“Don’t worry. We’re good for the next ten years at least.”

“Flatteries are my specialty.”

“Oh no,” she said, in a husky whisper, knocking against me with her shoulder. “No, they’re not.”

How long had we been walking? I had no idea. I stopped and looked behind us: I couldn’t see our hotel or any landmark at all. Civilization had disappeared behind the curve of the shore. I could imagine that we were on a deserted island, looking toward the horizon for a rescue we knew would never come. I don’t know what she was thinking, but she had that faraway look in her eyes as well, and as I looked into them (her eyes were the color of ivy), the tail end of a wave chilled my toes. I almost gasped it was so cold.

She turned to me.

“I could never live with myself if I went to the beach and didn’t get in. I would be ashamed for the rest of my life. You’re coming in, too.”

“Those vows were ambiguous.”

“On purpose, just for occasions such as this.”

She let go of my hand and took a deep breath, girding herself. I took a step toward the water myself, but with her hand on my stomach, she held me back.

“I’m first in,” she said. “I’m always first in. Ever since I was little. That’s what I want on my tombstone: First In, Last Out. Remember that.”

“I’m serious,” she said, and she studied my face. “You’ll remember?”

“I’ll remember. But I didn’t know that about you.”

But she was already gone. She ran into the water, whooping, and kept running as fast as she could, but slowed as the water got deeper. She pushed into it until she couldn’t walk at all, and then she dove under, disappearing completely for what seemed like a long time. Then she reappeared about five yards out, the bigger waves rolling against her back, lifting and releasing her, up and down, up and down. I think she was smiling.

We’d planned a big wedding, with friends and family coming in from all over. There was going to be a band and your choice of chicken or fish or veg, and a first dance and a sound system that could turn even my mousey 80-year-old Aunt Muriel’s voice into that of a roaring lion. But all that was postponed, of course. We’d talked about waiting, to do what we’d hoped to do just a little bit later. When things got back to normal. But we couldn’t wait a minute longer. We were married at the courthouse, with our two best friends, witnesses to our contract, safe behind a Plexiglas wall. Now here we were at the beach, in the days just before summer, the rest of our lives ahead of us. Six days of fog and rain, one day of sun, and then the rest of our lives.

She waved, I waved.

“Come and get me if you dare!” she yelled into the wind, my freckled goddess in the wine-dark sea, the woman who had already told me the words she wanted on her tombstone when death does us part. I wanted to tell her what I wanted on mine, too, but the water was cold, and she was already so far away.  OH

Daniel Wallace is the author of six novels, including Big Fish and, most recently, Extraordinary Adventures. He lives in Chapel Hill, where he directs the Creative Writing Program at the University of North Carolina.

Favorite children’s book: Cloudy with a Chance of Meatballs by Judi Barrett.

A brave new world: The Stitch Around Her MouthAugust 2021

A brave new world: Into the NewAugust 2021